Accessibility links
These Military Projects Are Losing Funding To Trump's Border Wall The Pentagon notified lawmakers in several states that $3.6 billion for planned military projects will be diverted to pay for 11 border construction projects along the southern border. A U.S. Customs and Border Protection vehicle sits near the wall as President Trump visits a new section of the border wall with Mexico in El Centro, Calif., on April 5. This area is one where the Pentagon will spend more resources shifted away from military construction projects. Jacquelyn Martin/AP hide caption 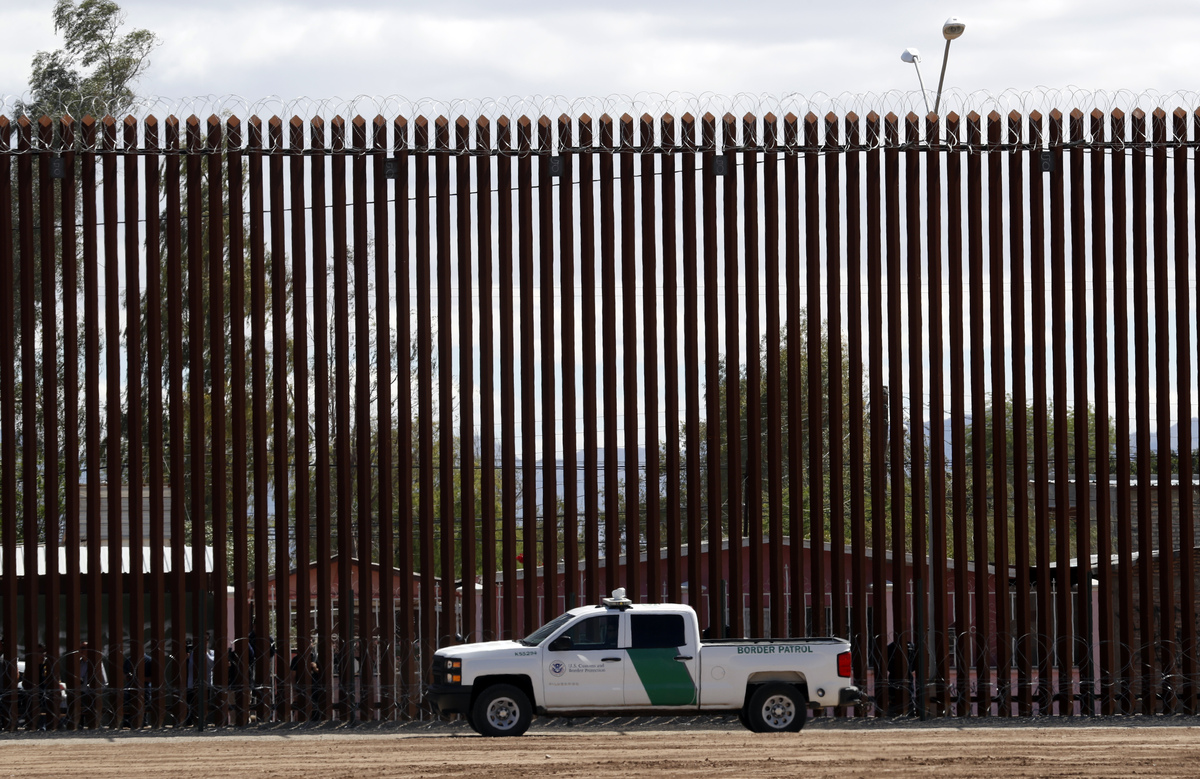 A U.S. Customs and Border Protection vehicle sits near the wall as President Trump visits a new section of the border wall with Mexico in El Centro, Calif., on April 5. This area is one where the Pentagon will spend more resources shifted away from military construction projects.

The Pentagon revealed on Wednesday the full list of $3.6 billion in military construction projects that will get shelved to help build a wall along the U.S.- Mexico border, according to documents obtained by NPR.

Lawmakers from Virginia to Arizona learned their states will lose millions in military construction projects as part of the plan.

Virginia Democratic Sens. Tim Kaine and Mark Warner slammed the move, saying their state alone will lose more than $77 million in planned construction projects. In all, four military projects will be impacted in Virginia.

"I'm deeply concerned about President Trump's plan to pull funding from critical national security projects — including millions of dollars from important projects in Virginia — so he can build his border wall," Kaine said. "The well-being of American troops is the core responsibility of every commander in the military, yet the commander in chief is shirking that duty so he can advance his own political agenda."

Tracking Trump On Immigration: A Relentless Push To Reshape Migration

The comments come a day after the Pentagon began calling congressional leaders to alert them of the overall plans to begin canceling $3.6 billion in military construction projects to fund new wall construction along the southwest border.

In a letter to House Armed Services Committee Chairman Adam Smith, D-Wash., Defense Secretary Mark Esper detailed 11 projects that would be completed with the diverted funds. They include new pedestrian fencing and barriers in San Diego, replacement of vehicle barriers in El Paso, Texas, and new fencing at the border in Yuma, Ariz.

Esper cites the national emergency Trump declared in February that required the use of armed forces for projects along the southwest border.

"Based on analysis and advice from the Chairman of the Joint Chiefs of Staff and input from the Commander, U.S. Army Corps of Engineers, the Department of Homeland Security (DHS), and the Department of the Interior and pursuant to the authority granted to me in Section 2808, I have determined that 11 military construction projects along the international border with Mexico, with an estimated total cost of $3.6 billion, are necessary to support the use of the armed forces in connection with the national emergency," Esper states.

According to a list of the projects, which NPR obtained through a congressional aide, about half are overseas. The domestic projects span Democratic and Republican districts.

"The decision by the President to divert funding meant to support U.S. national security interests so that he can build a border wall only makes us less safe," Warner said in a written statement. "Taking money away from our military — including funding to support critical projects here in Virginia — will mean we are less equipped to tackle threats here at home and abroad."

Sen. Martha McSally, R-Ariz., who is facing a tough reelection bid in 2020, said a project involving a ground transport equipment building at Fort Huachuca will lose $30 million in project funds.

In a statement, McSally downplayed the loss, saying it is a small fraction of the overall $3.6 billion and needed for national security. Also, the money can be backfilled by a provision in the proposed Senate version of the defense bill that aims to backfill the $3.6 billion through the fiscal year 2020 budget.

However, that same provision isn't in the House version of the National Defense Authorization Act. Both chambers are slated to negotiate a final version of the NDAA in the coming months.

"We need to secure our border and protect our military; we can and should do both," McSally said. "This one project at Fort Huachuca was already delayed because of ongoing environmental cleanup that is taking longer than expected."

Arizona is one of the states slated to get new funding related to wall construction projects.