Accessibility links
Trump Shows Altered Map of Hurricane Dorian's Path Trump erroneously insisted that Alabama was in the storm's path, and Wednesday he showed a weather service map clearly altered to include the state. 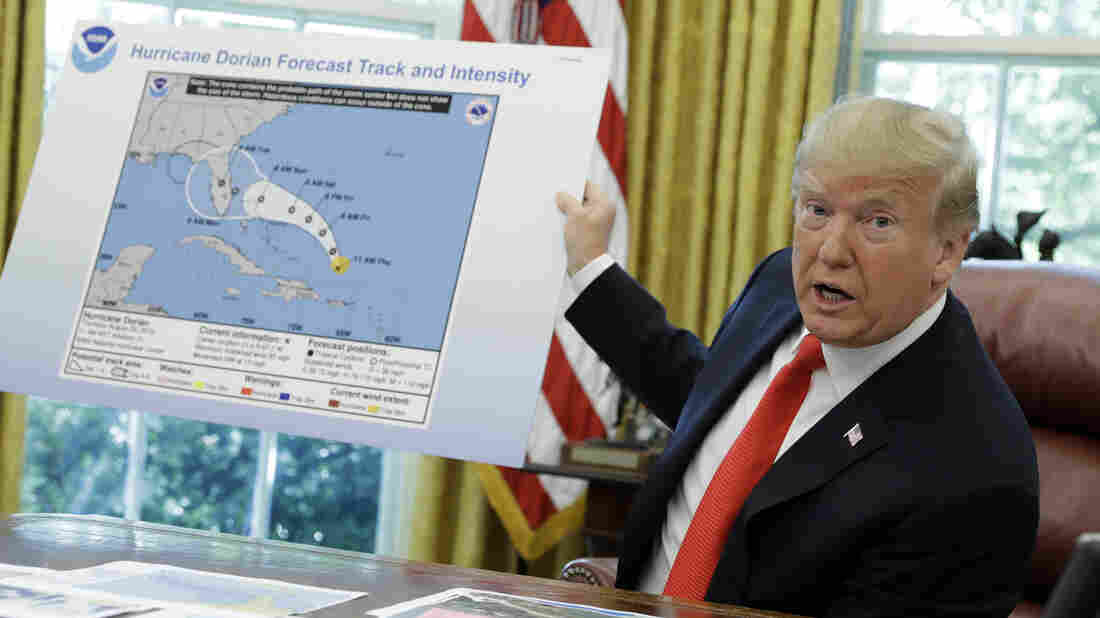 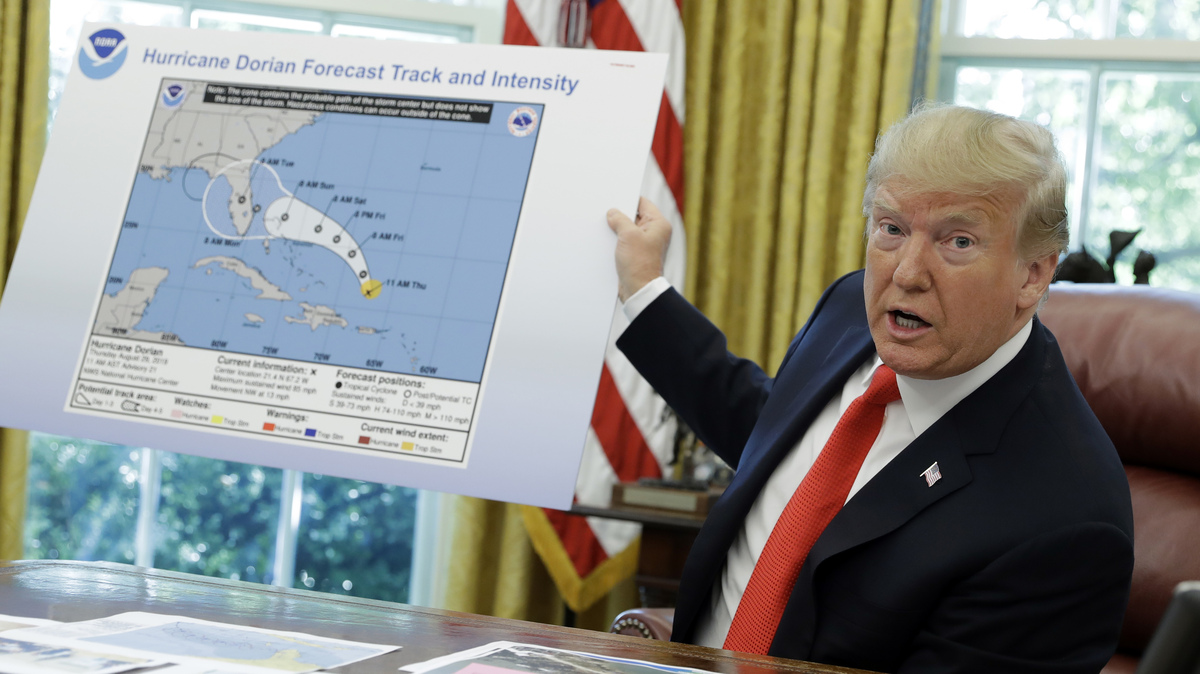 President Trump held up a map of Hurricane Dorian's projected path clearly altered to include Alabama.

President Trump continues to defend his now four-day old assertion that Alabama was once in the projected path of Hurricane Dorian. In a new tweet Thursday morning, the President insisted "Alabama was going to be hit or grazed, and then Hurricane Dorian took a different path." The President then lashed out at the news media saying "The Fake News knows this very well. That's why they're the Fake News!"

Alabama was going to be hit or grazed, and then Hurricane Dorian took a different path (up along the East Coast). The Fake News knows this very well. That’s why they’re the Fake News!

On Wednesday, during an Oval Office briefing on Hurricane Dorian, President Trump displayed what appeared to be an official National Weather Service map from last Thursday, in which the storm's projected path was extended to Alabama by someone using a black marker.

"We got lucky in Florida — very, very lucky indeed. We had actually, our original chart was that it was going to be hitting Florida directly," Trump said.

Trump then asked for, and was handed, a large forecast map.

"That was the original chart, you see it was going to hit not only Florida but Georgia ... and was going toward the Gulf, that's what was originally projected. And it took a right turn. And ultimately, hopefully, we're going to be lucky."

"It's heading up the coast, and Florida was grazed," he said.

Meteorologists and others zoomed in on the apparent Sharpie mark, and reaction to the alteration, as well as Trump's use of an old map, was swift:

Can't let this go unnoticed. @realDonaldTrump displayed a doctored version of the @NHC_Atlantic forecast for #Dorian.

The black extension past Florida did not exist; that's not how forecast cones are drawn. pic.twitter.com/GqHikOBYU6

At a subsequent event, Trump was asked about the apparent addition to the map. "I don't know," he answered.

"I know that Alabama was in the original forecast they thought it would get it as a piece of it," he said. He again insisted there were forecasts in which Alabama was considered in the storm's path.

Some on Twitter also noted that, under law, knowingly issuing a false weather report is a violation of the law subject to imprisonment and or fine.

While Alabama remains out of Dorian's path, coastal areas of Georgia, South Carolina and North Carolina are under hurricane warnings as the storm is now projected to move up the Southeastern coast.

"Alabama could even be in for at least some very strong winds and something more than that, it could be," he said Sunday. "This just came up, unfortunately. It's the size of — the storm that we're talking about. So, for Alabama, just please be careful also."

At the end of last week, the National Hurricane Center did include Alabama in its prediction for tropical-force winds:

Tropical-storm-force winds from #Dorian could begin in parts of Florida *as early as* Sunday morning. Now is the time to think about what kinds of preparations you might need to make and listen to advice from your local emergency officials https://t.co/yChCF6oWL9 pic.twitter.com/KAFnJSd0Gy

But by Sunday, the National Weather Service in Birmingham, Ala., clarified that the state would not feel any affects of Dorian:

Alabama will NOT see any impacts from #Dorian. We repeat, no impacts from Hurricane #Dorian will be felt across Alabama. The system will remain too far east. #alwx

Trump is known to use Sharpies to sign bills and to mark up newspaper and magazine articles. But the White House has so far not commented on who altered the weather map, or if indeed a Sharpie was used.

Later Wednesday, Trump tweeted a map from the South Florida Water Management District from Aug. 28, saying it was the "originally projected path of the Hurricane in its early stages." Though he said the map shows "almost all models predicted it to go through Florida also hitting Georgia and Alabama," the paths drawn out on the map mostly miss Alabama. The map also notes at the bottom: "[National Hurricane Center] Advisories and County Emergency Management statements supersede this product."

This was the originally projected path of the Hurricane in its early stages. As you can see, almost all models predicted it to go through Florida also hitting Georgia and Alabama. I accept the Fake News apologies! pic.twitter.com/0uCT0Qvyo6