Accessibility links
Parliament Rejects New Election Called For By Boris Johnson The prime minister failed to garner the two-thirds of members necessary for an election he wanted to hold on Oct. 15. 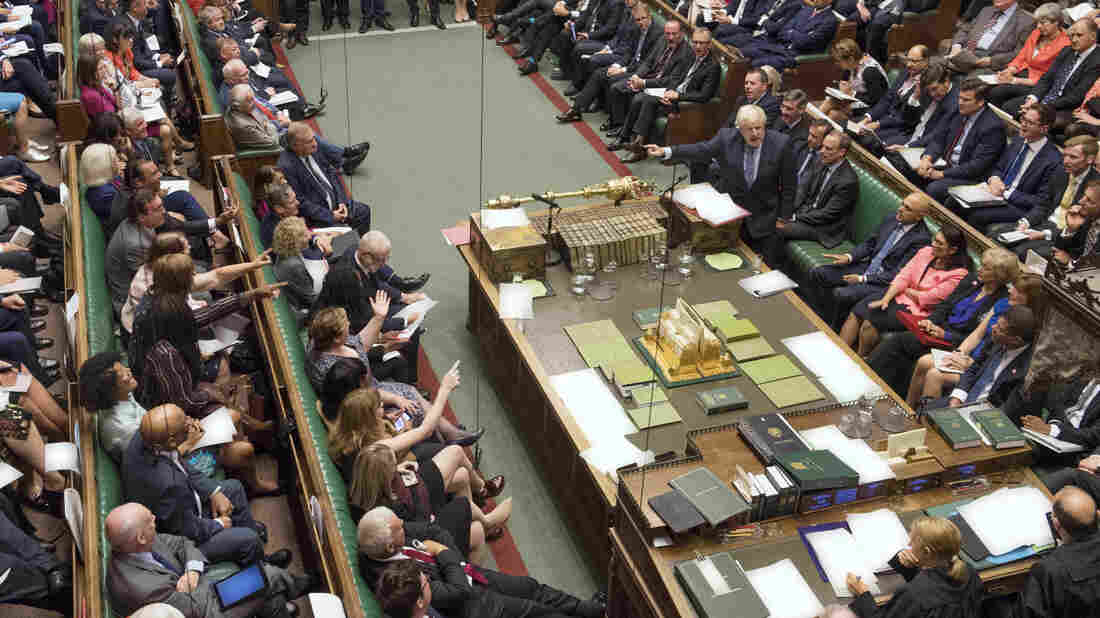 Prime Minister Boris Johnson (center right) gestures during his first Prime Minister's Questions in London Wednesday. The U.K.'s House of Commons voted to block a no-deal Brexit, prompting Johnson to call for a general election next month — which was also voted down. Jessica Taylor/House of Commons via AP hide caption 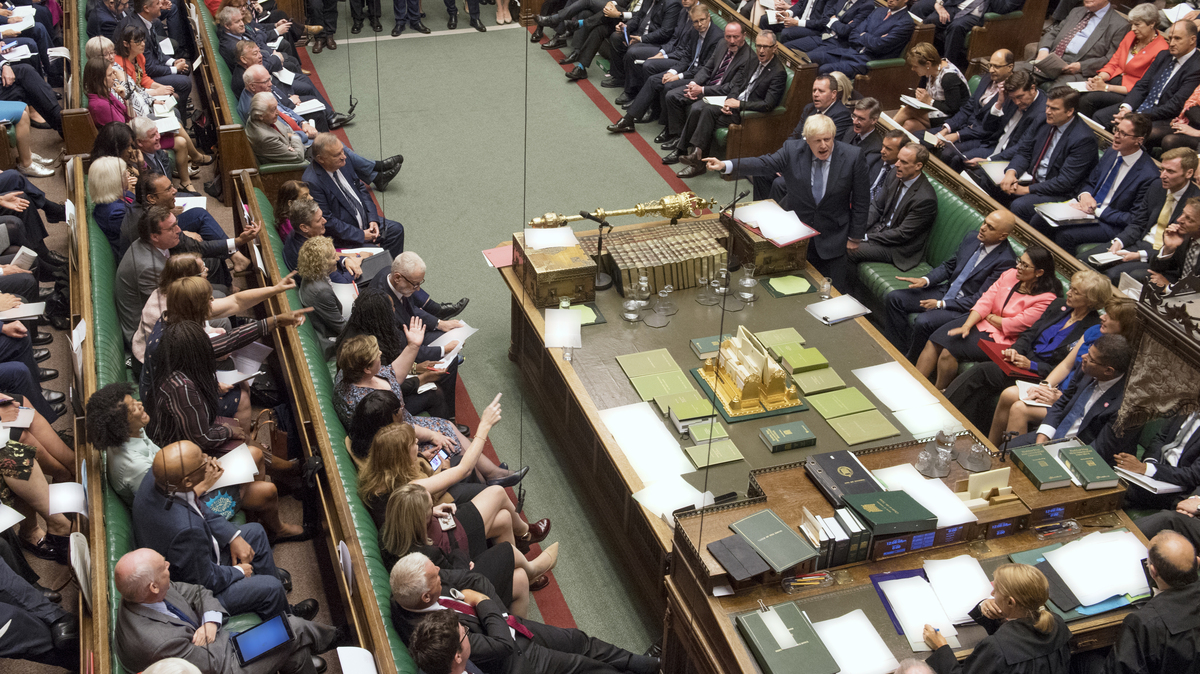 Prime Minister Boris Johnson (center right) gestures during his first Prime Minister's Questions in London Wednesday. The U.K.'s House of Commons voted to block a no-deal Brexit, prompting Johnson to call for a general election next month — which was also voted down.

Jessica Taylor/House of Commons via AP

Britain's Parliament failed to give Prime Minister Boris Johnson the two-thirds necessary to hold snap elections next month — leaving him with little choice but to go back to the European Union to try to negotiate a new withdrawal deal.

Johnson's request came not long after the House of Commons passed a measure blocking his push to leave the European Union without a deal.

The 298-56 vote left the U.K. no closer to a resolution to a problem that has vexed politicians for some three years since a majority of people voted in a referendum to leave the EU.

The prime minister, who succeeded embattled Theresa May less than three months ago, called for Oct. 15 elections, insisting that it was the only way forward. Johnson wants to leave the EU by the end of October, whether there's a deal or not.

Earlier, Parliament approved a bill by a vote of 327 to 299 to prevent Johnson from pulling out of the EU without a deal. After the result was announced, Johnson slammed the legislation, saying it could extend the already delayed Brexit process for "many more years to come."

The Benn Bill, named after Member of Parliament Hilary Benn, of the opposition Labour Party, would compel Johnson to seek an extension until next year if Parliament doesn't OK a no-deal exit.

This is the second consecutive day Johnson has suffered a political setback. A defection on Tuesday robbed the prime minister of his single-seat majority. On the same day, 21 Tory members joined with the opposition to hand Johnson a stinging parliamentary rebuke by taking control of the chamber's agenda.

Explaining his bill, Benn said it "gives the Government time either to reach a new agreement with the European Union at the European Council meeting next month or to seek Parliament's specific consent to leave the EU without a deal."

If neither of those conditions is met by Oct. 19, Benn says, Johnson must ask the European Council to add another Brexit extension, setting the new date for Jan. 31, 2020.

The current Brexit deadline of Oct. 31 is itself an extension of the original March 29 date.

Johnson also criticized the bill by saying it seeks to "force the prime minister, with a pre-drafted letter, to surrender in international negotiations" with the EU.

"I refuse to do this," Johnson said of that requirement. He then said there is only one way forward: to hold a general election on Oct. 15.

Jeremy Corbyn, the leader of Britain's opposition Labour Party, criticized Johnson for not having a detailed plan to carry out Britain's complex divorce from the European Union.

"This prime minister claims he has a strategy, but he can't tell us what it is," Corbyn said.

He then accused Johnson of wanting to enter a "deeply unpalatable" deal that would push Britain "into the arms of a trade deal with Donald Trump that will put America first and Britain a distant second."

The measure now heads to the House of Lords, Parliament's upper chamber, where it faces scores of amendments but is expected to pass.

Supporters of Benn's plan hope to get the bill passed into law quickly, perhaps by week's end. They hope to do so before Johnson moves to suspend Parliament, a move approved by Queen Elizabeth II last week.

If it takes place, the suspension would go into effect next week through Oct. 14, the day before Johnson had hoped to hold national elections.

NPR's Frank Langfitt contributed to this report from London.