Accessibility links
California May Expand Employee Perks To Uber Drivers And Other Contract Workers California lawmakers are expected to approve a proposal to reclassify Uber drivers and other contract workers in the state as employees, giving them more rights and benefits at employers' expense. Leonardo Diaz lives in Los Angeles and drives for Uber and Lyft. He says he misses employee health and paid leave benefits he used to receive when he worked as a valet. Courtesy of Victor Cuevas hide caption 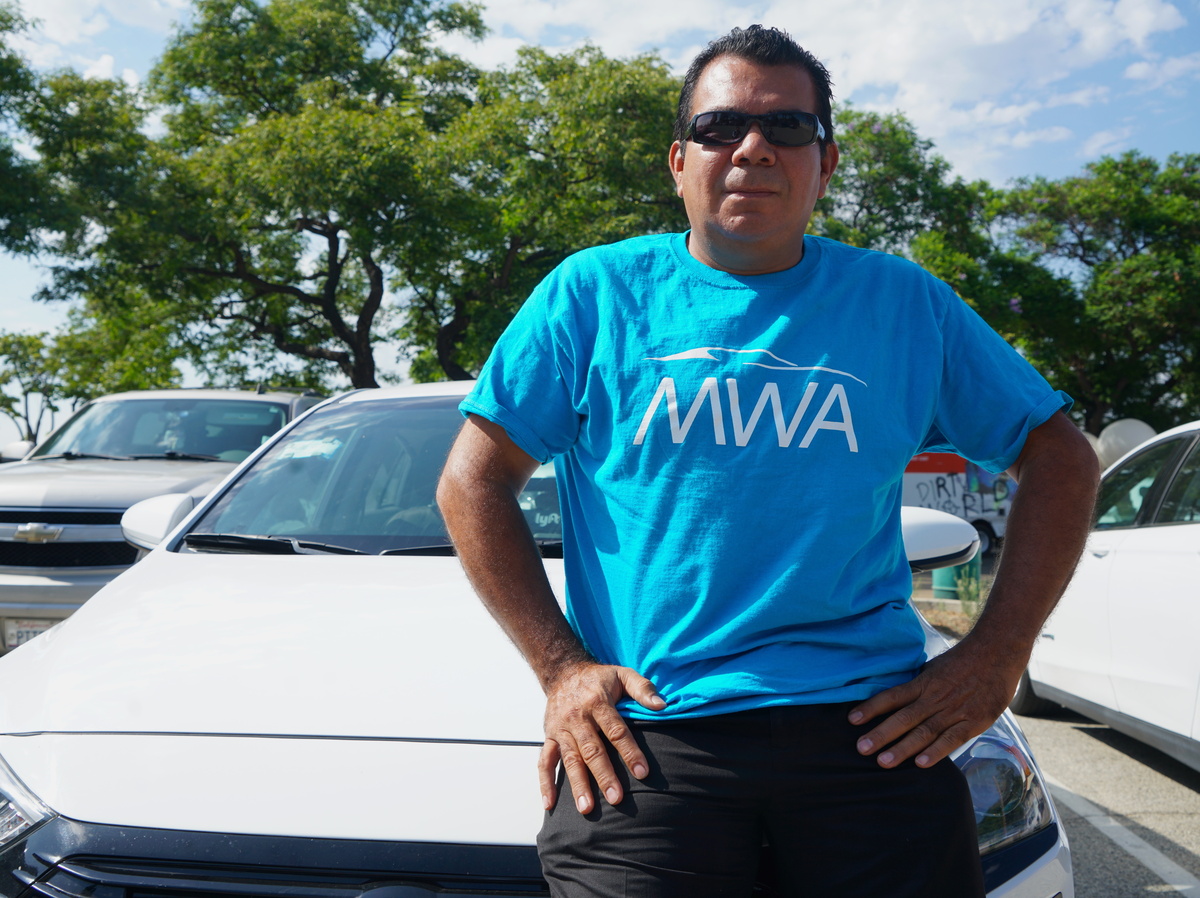 Leonardo Diaz lives in Los Angeles and drives for Uber and Lyft. He says he misses employee health and paid leave benefits he used to receive when he worked as a valet.

Who should qualify for minimum wage protections, sick leave or any of the other benefits typically given employees?

California's state Legislature is reopening that high-stakes, decades-long debate, as it prepares to vote on a proposal that would give hundreds of thousands of contract workers, such as Uber and Lyft drivers, new benefits by legally reclassifying them as employees.

If it passes, the state's narrower definition of "contractor" would trigger a host of other changes for companies that would then have to pay for Social Security, workers' compensation and unemployment insurance. Large employers would also have to pay for health insurance.

This would be a significant development in workplace law and could eventually have implications for workers and companies across the country.

The proposed change is of keen interest to a rapidly growing population of contractors like Leonardo Diaz. For most of the past 4 1/2 years, he has made a decent living working 40 to 50 hours a week driving for Uber and Lyft.

"I love interacting with people," says the father of four, who lives in Los Angeles.

But more recently, Diaz has soured on his job. He says that both ride-hailing companies cut his share of payments, reducing his take-home pay to only $9 an hour, after taking the cost of gas, insurance and car repairs into account. Diaz has tried to boost his profits by trading in his gas-powered Hyundai Elantra for a similar hybrid vehicle.

But he says the bigger problem is that he is tired of working as a contractor and misses employee health and paid leave benefits he used to receive when he worked as a valet.

"We don't get any holiday pay," Diaz says. "If we get sick, you know, nobody's going to pay for our doctors."

Contractors like Diaz make up a fast-growing part of the workforce. And any company in California using them — think Amazon or FedEx — could be affected. The change could also upend the business models of companies such as Instacart or TaskRabbit that have made gig work readily available in recent years.

And the impact of the new law would reverberate beyond the state.

"Everyone is looking to California right now and they're all following it with bated breath because they recognize that likely whatever happens in California is going to sweep across the country," says Monique Ngo-Bonnici, a private attorney who represents businesses.

Ngo-Bonnici argues that the California proposal would put big constraints on workers and companies alike. Specifically, it would mean more workers will be put on shifts, which in certain municipalities must be scheduled weeks in advance — giving workers far less flexibility, she says.

Lyft confirms it would have to revamp its operations in the state if drivers are reclassified as employees.

"We would need far fewer drivers than we currently have," says Adrian Durbin, a Lyft spokesman. And those that remained would have a much more rigid work schedule.

Durbin says Lyft and other similar gig companies pushed California lawmakers for a middle ground that would grant independent contractors a narrower set of benefits, like minimum wage guarantees, without making them full-fledged employees.

The companies are not giving up the fight. Uber, Lyft and DoorDash have all pledged to spend $30 million each on a ballot initiative next year that would give them exemptions.

But Lorena Gonzalez, the San Diego lawmaker who sponsored the bill, doesn't think gig companies should be exempt.

The Future Of Benefits: A New York Program Might Provide A Model

Gonzalez argues that for too long, some companies skirted their financial and legal responsibilities to their workers by misclassifying them as independent contractors. Those who haven't been doing that, she says, support her proposal.

"I think a company that's doing the right thing is like, 'Finally, I'm not going to be undercut by a company that cheats their workers,' " she says.

Diaz, the Uber and Lyft driver, says he is pinning a lot of hopes on the proposal's passage, hoping it will improve pay and working conditions and pave the way toward forming a union. If it passes, the law will take effect in January.