Accessibility links
What Will A Reconstructed Notre Dame Look Like? The Answer Is Up For Debate Architects from around the world have flooded social media with their visions of a new Notre Dame. But 55% of French respondents say they want the cathedral to be just as it was before, a poll finds. 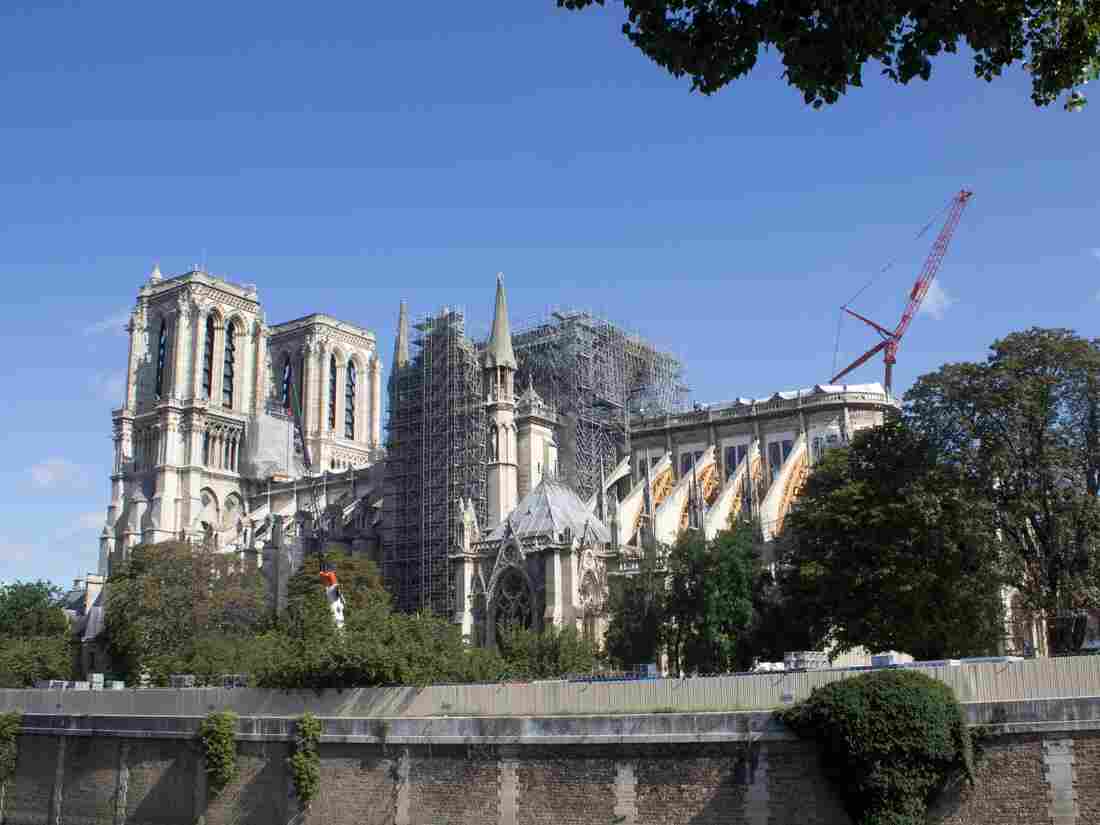 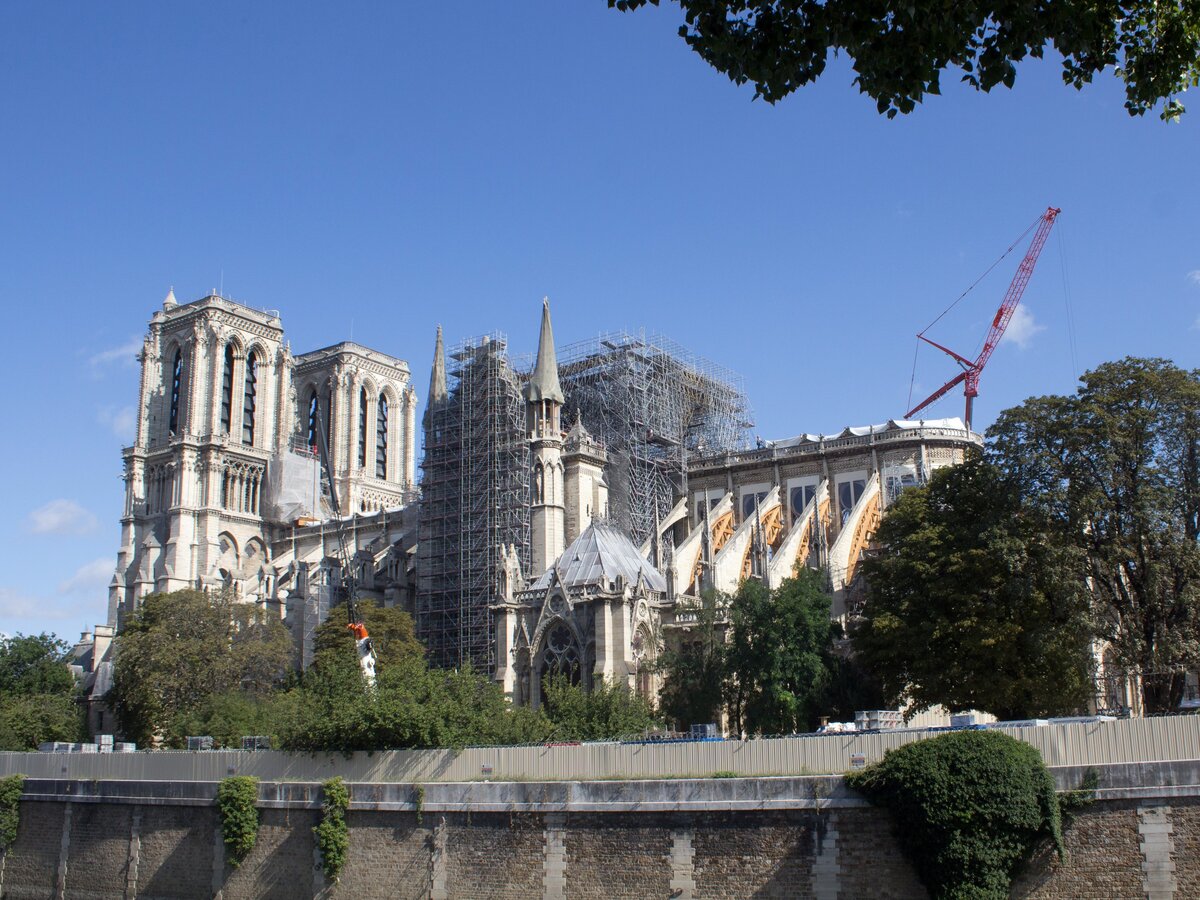 Notre Dame Cathedral may have been saved from the flames on April 15, but the medieval monument is still in grave danger of collapsing, according to French culture minister Franck Riester. The site was closed for three weeks over the summer for lead pollution cleanup, and now workers are racing the clock to stabilize the structure and clear remaining rubble so that reconstruction can begin.

On the day of the fire, President Emmanuel Macron made a hopeful declaration that the Paris landmark would be restored and open to the public within five years, an ambitious goal in view of the French capital hosting the 2024 Summer Olympics.

But what exactly will a reconstructed and restored Notre Dame look like? That's still a matter of debate.

Days after the fire ripped through the 850-year-old cathedral, destroying its spire and roof, Prime Minister Édouard Philippe announced an international architecture competition. The competition, Philippe said, would determine whether the spire should be reconstructed — and if so, whether it would replicate the 19th century design by French architect Eugène Emmanuel Viollet-le-Duc or be something more modern.

Architects from around the world flooded Instagram and Twitter with their visions of a new Notre Dame. There were glass roofs, slick spirals and Disney-esque castle towers. Architects in Stockholm suggested turning the cathedral's rooftop into a giant swimming pool.

But if you ask the French, 55% say they want the cathedral to be restored exactly as it was before, according to a poll by Odoxa-Dentsu.

In June, clergy put on their vestments and hardhats to celebrate the first Mass in Notre Dame after the fire. The service was closed to the public, but spectators still gathered at police barriers outside the cathedral.

Elodie Cuenca came from Versailles to see the damage with her own eyes. She is ambivalent about drastically changing the aesthetic of Notre Dame, a symbol of Paris and "one of the best masterpieces of architecture and all the craftsman skills," she said. "We should consider the times we're living in, but maybe we shouldn't make a mix with modern architecture, to respect the past."

Parisian Karl Garzuel is also wary of drastic change and worries that adding new architectural features might change the spirit of Notre Dame.

We invite you to discover our proposal « PALINGENESIS, TRIBUTE TO NOTRE-DAME, A Gothic and Biomimetic Forest for the Cathedral », Paris 2019

Each wave of time contributes its... https://t.co/OM1GlROMUq

"I think we could rebuild at least the major part of the structure to be identical to before and maybe add a touch of modernity, without taking away the character of the building," he said.

Jacques Marilleau, another onlooker during the June Mass, was in tears. He found it "insulting" that the government had announced an international competition so soon after the fire and that architects were already publicizing illustrations of their ideas.

"I'm very cautious about a new project," he said. "I'm not against a new project, on the condition it's supported by many experts and the public is informed of all the cultural sources and references."

Jean Nouvel, the most famous living French architect and best known for his ultramodern designs, told the Europe 1 TV channel in May that he felt that Notre Dame is a testimony of culture and history, so it shouldn't be changed too much.

Rather than modernizing, "I think we have to be more Gothic than ever," Nouvel said.

Didier Durand from Pierrenoel, a stone specialist group working on the cathedral, suggests Macron's five-year deadline for reconstruction will be met only if Notre Dame is restored to its identical former state.

But it is "way too early" to think about reconstruction, warns Thierry Zimmer, the deputy director of the Historical Monuments Research Laboratory, part of the French Ministry of Culture. "We are not sure we have completely saved the cathedral yet," he explained.

Before reconstruction can begin, debris still has to be removed from inside the cathedral and the ceiling vaults must be stabilized. And restoring Notre Dame exactly as it was might not even be possible, Zimmer says. His team is analyzing the rubble and will advise architects and officials on materials.

Geologists from Zimmer's lab will have to find stones with the same characteristics as the originals damaged in the fire.

"We will have great difficulties if, for example, we know exactly what we want but we have no stones to do it," he said.

The original stones were excavated from quarries outside the city walls that used to enclose Paris. Now parts of the city sit on top of those pits, making it dangerous to use the same sources.

"We say all of Paris is something like Gruyère, like a cheese with a lot of holes," Zimmer says.

The French government will have the final decision on how to reconstruct Notre Dame following studies and reports from teams like the Historical Monuments Research Laboratory, and extensive discussions with specialists, historians, engineers and architects.

Prominent changes to Paris' historical landmarks and cityscape have rarely been executed without controversy. As Gustave Eiffel's tower went up, critics disparaged it as "deformed," "ungainly" and a "truly tragic street lamp." In 1984, President François Mitterrand faced a backlash when he commissioned architect I.M. Pei's glass pyramid for the courtyard of the Louvre. Critics called it an "eyesore" and an "anachronistic intrusion." Now it is a much admired landmark.

Viollet-le-Duc's vision for the Notre Dame spire was also criticized back in 1859. And before that, French writer Victor Hugo lamented earlier alterations to the cathedral — especially those that had come at the hands of architects. In his 1831 novel The Hunchback of Notre-Dame, Hugo wrote, "If we had the time to examine one by one the diverse traces of destruction imprinted upon the old church, the part of time would be the least, the worst, that of men, especially men of art ... since some have assumed the title of architect in the last two centuries."