Accessibility links
Scientists Unveil Weed Breathalyzer, Launching Debate Over Next Steps Researchers at the University of Pittsburgh have developed the latest tool to detect THC — the main psychoactive ingredient in marijuana — in a person's breath. 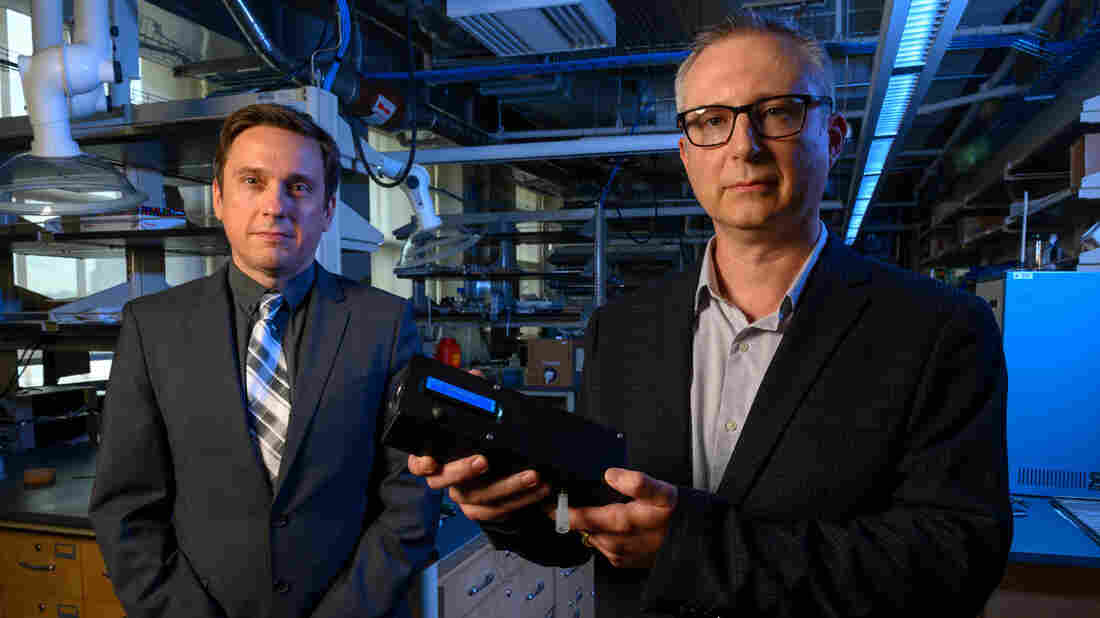 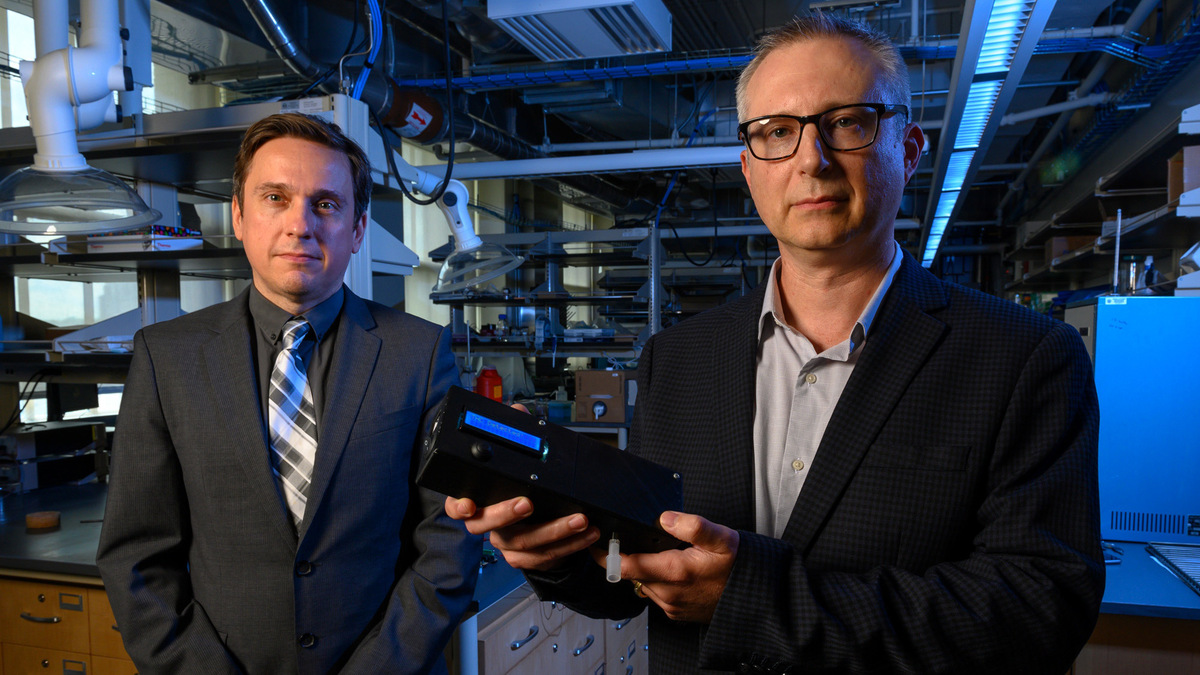 University of Pittsburgh researchers Ervin Sejdic and Alexander Star hold up their prototype Breathalyzer-style device for detecting THC — the main psychoactive ingredient in marijuana — in a person's breath.

Courtesy of the University of Pittsburgh

The alcohol Breathalyzer came to life slowly, over the course of decades.

From the 1930s through the 1960s, scientists, lawmakers, police and the public quarreled over the veracity of the numbers spit out by the device, the appropriate legal limit for drivers and whether they could trust a machine over a cop's testimony.

Today, the same debate is playing out over cannabis.

As 33 states and the District of Columbia have legalized pot in some form, Breathalyzer-type devices that could theoretically aid police enforcement have begun appearing in various stages of development. But legal experts and scientists say there's a long way to go before those devices can actually detect a driver's impairment.

Last week, a team of researchers at the University of Pittsburgh announced the latest tool to detect THC — delta-9-tetrahydrocannabinol, the main psychoactive component in pot — in breath.

The university's Star Lab, led by Alexander Star, began developing the box-shaped device in 2016, in the midst of a wave of pot legalization across the United States. Star, a chemistry professor, partnered with Ervin Sejdic, a professor of electrical and computer engineering who's also at the university, to build the prototype.

The device uses carbon nanotubes, which are 1/100,000 the size of human hair, to recognize the presence of THC, even when other substances are in the breath, such as alcohol. The THC molecule binds to the surface of the tubes, altering their electrical properties.

"Nanotechnology sensors can detect THC at levels comparable to or better than mass spectrometry, which is considered the gold standard for THC detection," says the news release from the university's Swanson School of Engineering.

And the device is nearly ready for mass production.

"If we have a suitable industrial partner," Star told Here & Now's Jeremy Hobson, "then the device by itself would be quite ready in a few months."

The remaining steps, he says, include testing the prototype and correlating the device's output to the driver's level of impairment.

With alcohol, you can figure out impairment by measuring the amount of alcohol in someone's blood, which you can determine from a Breathalyzer using the "blood to breath," or "partition," ratio. Make that translation from breath to blood to brain, and you have a relatively accurate sense of how drunk someone is.

"So when it comes to these marijuana breath tests, that's the million-dollar question right now," says Chris Halsor, a Denver lawyer who focuses on issues around legal cannabis.

Is there a ratio that links the amount of THC in someone's breath to the amount in the person's blood — and then to exactly how stoned that person is?

No, says Sejdic. The correlation "is basically missing, from a scientific point of view." 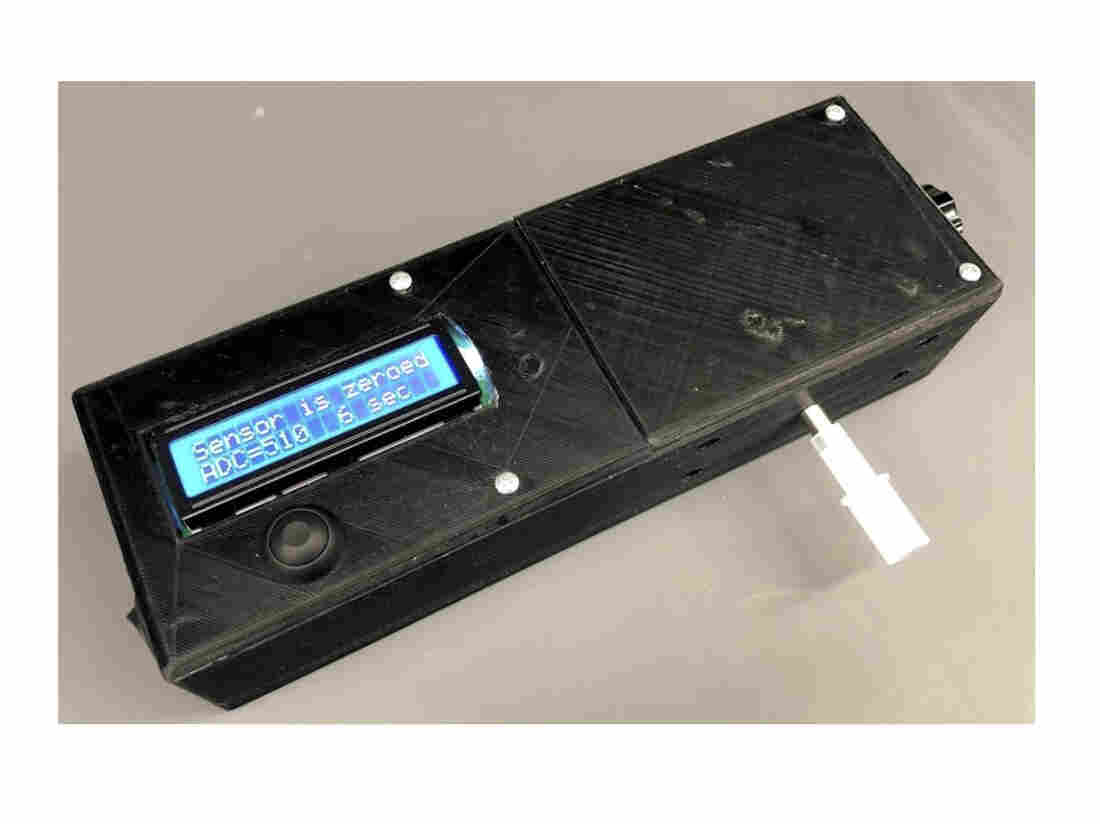 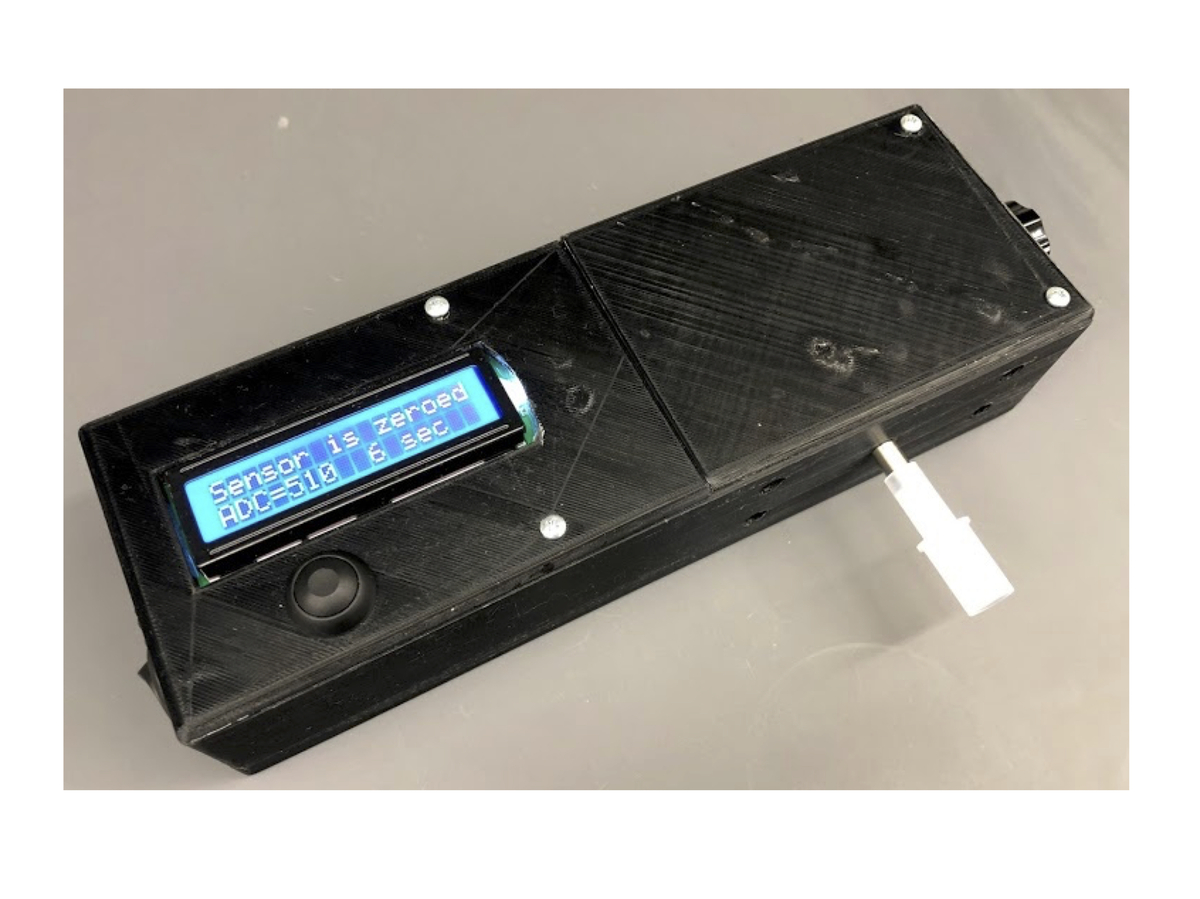 University of Pittsburgh researchers developed a prototype device that can measure the amount of THC in a person's breath.

Courtesy of the University of Pittsburgh

Sejdic and Star have figured out how to set a threshold on their device to detect only a certain amount of THC, which they say will help avoid flagging pot use from several days prior. But without a comprehensive understanding of the correlation between that amount and the driver's level of impairment, the device may not be particularly useful to police.

On top of that hurdle, there's the legal question of what level is safe for driving, which may be hard to answer. It took American courts several decades to settle on today's blood alcohol concentration limit of 0.08%. States have already set various legal guidelines, though some scientists argue that none of them are backed by hard science.

Halsor, who has taught police about marijuana DUIs for years, says some officers whom he works with are hesitant about the devices. They worry that a cop with less training might use one as a crutch "instead of actually evaluating the individuals and looking at how they're performing physically, mentally and cognitively," Halsor says.

He advocates for a more hands-on approach: training officers to understand and detect marijuana usage without blood or breath tests.

"It's not to say that five years from now we won't have some great device," Halsor says.

But, for now, to say that he's skeptical would be an understatement. And he says he's especially concerned about a lack of human testing as a result of federal regulations around cannabis.

Star and Sejdic understand that challenge. They say it took six months to even get started on their research because they had to get permission from the Drug Enforcement Administration to work with THC.

"It's a kind of both ethical and legal issue," Sejdic says. "Given that the marijuana is still a Schedule I substance, it's difficult to actually carry out any research related to this substance."

The breakthroughs that would make this kind of device effective might happen first in Canada, Halsor says. The country's decision to legalize cannabis last year "now opens the door to research being able to be conducted unencumbered," he says.

But the University of Pittsburgh researchers are hopeful that the U.S. might get the ball rolling.

"I think there will be some push even for the federal government to actually allow researchers to look and correlate these levels of smoking and impairment," Sejdic says.

Until the government and the legal system catch up, they say, creating an accurate Breathalyzer-type device itself is the first step toward enforcing those "Drive High, Get A DUI" roadside signs.