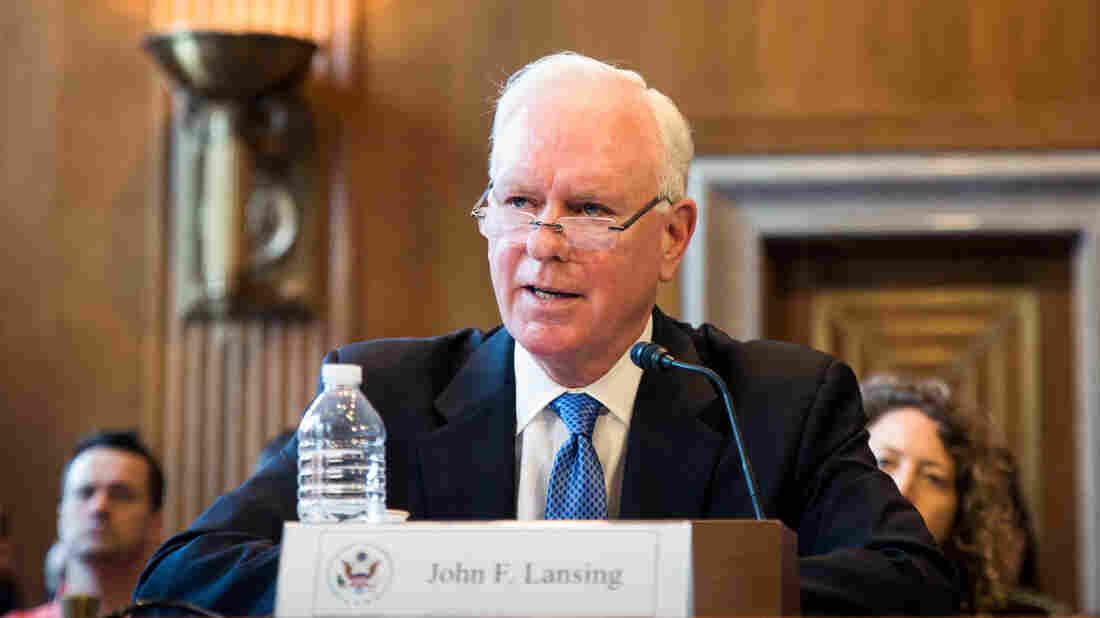 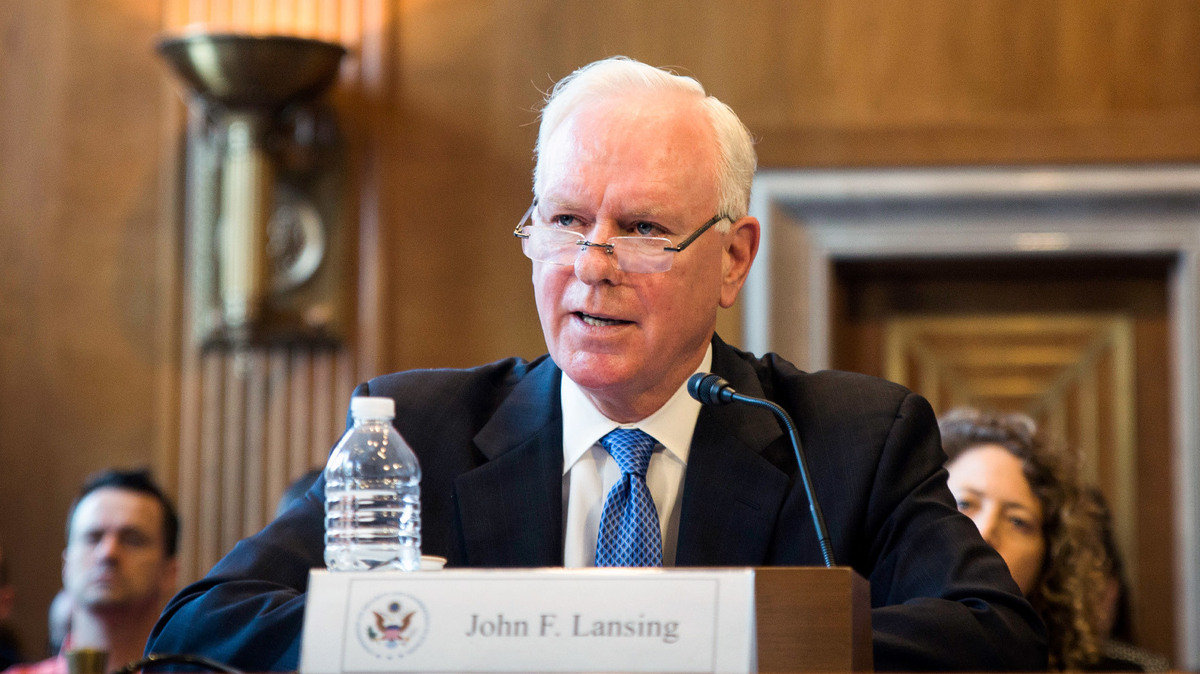 John Lansing, the chief executive officer and director of the U.S. Agency for Global Media, will become NPR's CEO in mid-October.

NPR has a new CEO. John Lansing, a veteran government broadcast and cable television executive, has been selected by NPR's corporate board to succeed its current chief, Jarl Mohn.

Lansing, who is 62, is currently the chief executive of the government agency that oversees Voice of America, Radio and Television Martí and Radio Free Europe/Radio Liberty, among others. He made his mark in his current job with stirring defenses of journalism, free from government interference.

Lansing will start in his new position in mid-October. He will be the 11th permanent president or chief executive in the radio network's nearly 50-year history.

In an interview, Lansing said he wants to build on NPR's successes in broadcast news and entertainment to become even more dominant in podcasting and more prevalent in streaming.

"When I think of NPR and I think of the member stations collectively, I think really of journalism as a public service, not tied to a profit motive," Lansing told NPR News. He defined NPR's mission as "serving the public with information and an excellence and quality about it that makes it 'must see' on a variety of platforms."

A number of executives will report directly to Lansing, including Nancy Barnes, senior vice president for news and editorial director, who joined NPR last November and oversees the network's newsroom.

Four years ago, Lansing was named by President Barack Obama to be the first chief executive of the broadcasting outfit that was renamed the U.S. Agency for Global Media. Lansing has won plaudits from journalists for his rousing defense of a free press even while serving in the Trump administration, which has been notably hostile to traditional notions of the role of journalism in civic life.

He took over a troubled organization beset by infighting and bureaucratic inefficiency. He is credited with restoring morale, in part by naming a noted journalist as head of the Voice of America: Amanda Bennett is a former top news executive at the Philadelphia Inquirer who previously held senior newsroom jobs at Bloomberg News and The Wall Street Journal.

Lansing said he took pride in maintaining conventional broadcasts while appealing to new audiences, reaching about 25% more people each week.

"What you really want to do is be connected to people that are consuming content on something they're holding in their hand, and aren't necessarily tied to a TV set on a wall or a radio in a living room," Lansing said. "Your mobility becomes extremely important to be involved and connected to audiences that are mobile and that tend to be, frankly, younger and, as we think of it at USAGM, future leaders, who can influence the rise of free and open societies."

Lansing's tenure at the agency has not been without controversy.

He held off a push by House Republicans to spin off Voice of America into a nongovernmental broadcaster. Lansing also elevated to chief strategy officer a former U.S. State Department staffer who recently pleaded guilty to having defrauded the U.S. Agency for Global Media out of more than $40,000 in government money in 2018, according to federal prosecutors.

Lansing says the agency referred Haroon Ullah's expenditures to auditors and investigators after travel assistants flagged them; according to the Justice Department statement, Ullah admitted submitting fraudulent receipts for hotel room reimbursements and fake medical claims to get government payments of upgrades in airline seat assignments, among other offenses.

Lansing previously held positions overseeing the Scripps Co.'s local television stations and then its national cable channels, which include the Food Network and HGTV, among others. For two years, he served as the president and CEO of a cable trade group called the Cable and Telecommunications Association for Marketing.

He will now lead the nation's top audio producer and broadcaster.

"In terms of mission, understanding of media, the depth of experience, his strategic leadership, his commitment to people and culture, I would say those were really the key things that we were looking for," said Goli Sheikholeslami, vice chairwoman of the NPR board of directors and CEO of Chicago Public Media.

"The challenges he will face at NPR are not dissimilar to challenges across the media landscape as a whole," said Sheikholeslami, who will soon take up the CEO job at New York Public Radio.

NPR stands stronger than it did at the outset of Mohn's five-year term in 2014. The network had run deficits in six of the seven previous years; under Mohn, it has achieved a slight surplus for each year during his tenure, even as the annual budget grew by more than 40%.

NPR draws more than 28 million listeners each week and 40 million unique monthly visitors to its website — both represent a rise of several million over those five years. NPR has also been the nation's leading producer of podcasts since Podtrac started measuring audiences. NPR maintains 17 national bureaus and 17 bureaus abroad. The network has won acclaim for its coverage of wars and disasters, yet suffered its own crisis and tragedy in 2016 when its David Gilkey and Zabihullah Tamanna were killed while on assignment in southern Afghanistan. Mohn placed an emphasis on fostering a more collaborative dynamic with the public radio stations that NPR serves and was given credit for making progress on that score.

Yet Lansing also takes over an institution riven by a scandal that hit its top reaches, with a chief news executive toppled over #MeToo complaints of inappropriate conduct toward female subordinates and colleagues. Mohn fired head of news Michael Oreskes on Halloween 2017. A later report commissioned by the NPR board found that questions had been raised about Oreskes' behavior even before his hiring and that concerns were raised throughout his tenure; the repeated and formal warnings by top executives (including Mohn) to Oreskes to stop the unwanted attention he paid to female colleagues proved ineffective.

NPR's president of operations, Loren Mayor, was the leading internal candidate for the chief executive position. While serving as chief operating officer, she took on a greater role during two of Mohn's medical leaves and in the aftermath of the sexual harassment scandal. She also has led initiatives to reform hiring practices and to sweep far more temporary positions into permanent slots, often working closely with the network's chief unions to do so.

Mayor is said to be staying on at the network as a top executive and deputy to Lansing, retaining the enhanced portfolio she took on after Mohn's health crises. Both Lansing and Sheikholeslami say he is adamant about pressing forward with reforms to the workplace culture at NPR that Mayor has already started to put in place.

The network's fight for listeners' time has become more feverish. Others have waded into the podcast fray with a vengeance. The streaming platform Spotify paid nearly a quarter-billion dollars to buy the podcast producer Gimlet, founded by former staffers of NPR and other public radio outlets. And The New York Times has won praise and new fans through its weekday podcast The Daily, with in-depth interviews of reporters and newsmakers.

The other is the fight for donors. Mohn had promised to attract major contributions to NPR before the end of his tenure; to date he has not landed the major eight- and nine-figure donations his stated aspirations suggested.

"Jarl would be the first to say that it is the area where he feels that his work was not complete," Sheikholeslami said. "The combination of his health issues plus the situation with Mike Oreskes did derail his plans."

That said, Mohn set higher annual expectations for the network in fundraising and agreed to be co-chairman of its 50th-anniversary capital campaign. He has previously announced he would be staying on as president emeritus to help the network raise major gifts, and along with his wife, Pamela Mohn, he personally committed $10 million to the network.

Unlike some predecessors, Lansing doesn't face a particularly fraught political landscape. Government support for the public radio system isn't in any immediate jeopardy. NPR takes only a few million dollars a year from federal sources for its programs. While member stations on average receive about 10% of their funding from the federal government, fees from the stations make up a significant part of the NPR budget.

Lansing has earned an advanced degree in political agility. At the U.S. Agency for Global Media, Lansing championed a free press even as leaders of many nations move against it.

"Governments around the world are increasingly cracking down on the free flow of information; silencing dialogue and dissent; and distorting reality," Lansing said in a speech he delivered in May to the Media for Democracy Forum. "The result, I believe, is a war on truth."

He continued: "Citizens in countries from Russia to China, from Iran to North Korea, have been victimized for decades. But now we're seeing authoritarian regimes expanding around the globe, with media repression in places like Turkey and Venezuela, Cambodia and Vietnam."

Trump has notably praised authoritarian figures, including the leaders of North Korea, the Philippines, Russia and Turkey and has waged his own fight against journalists.

While they do not broadcast within the U.S., the Voice of America and the other media outfits Lansing has overseen typically adhere to traditional concepts of factual, nonideological journalism, with the frequent exception of Radio Martí — historically an anti-Castro and anti-Cuban communist outlet. The roots of the VOA involved providing truthful reports to people under Nazi and Axis power rule during World War II. The varied broadcasters also offered jazz and other music to appeal to people under communist regimes using a soft form of diplomacy. Their editorial independence is enshrined in federal law, though it sometimes came under attack.

Now Lansing says he wants to draw on the intellectual and creative impulses of his new staffers as he leads a domestic journalistic powerhouse with an international reputation and reach.

"I want to hear the ideas that are bubbling underneath right now and what people are excited about, what they're looking forward to developing," Lansing said Thursday. "And I want to look for areas that I can provide leadership to bring resources together as needed strategically to find the right priorities that make the most sense for growing NPR this year and then into the future."

Disclosure: This story was reported by NPR media correspondent David Folkenflik under guidance from NPR chief business editor Pallavi Gogoi. Under standard procedures for reporting on NPR matters, NPR's corporate and news executives were not allowed to review the report until it was posted.