Accessibility links
Ella Fitzgerald In Soulsville In the late '60s, young people were listening to soul music — so Fitzgerald started incorporating soul idioms into her concerts. One particular performance in 1968 shows how much she learned from it. 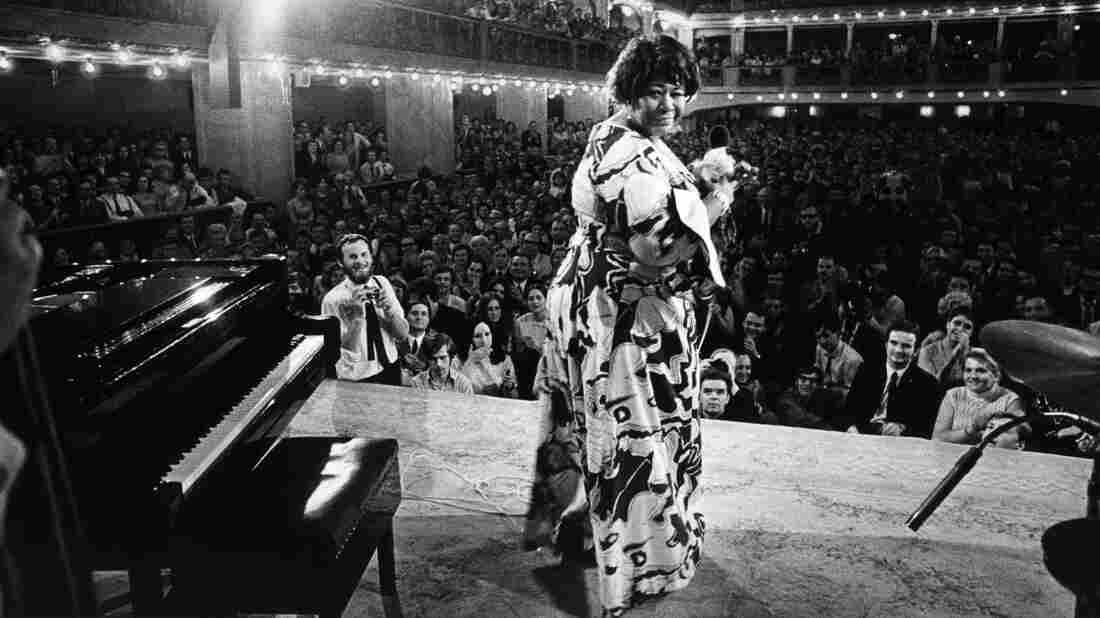 Ella Fitzgerald, performing in 1969 at Lucerna Hall. In 1967, she began singing "I Can't Stop Loving You" as a way into the soul world. Miroslav Zajic/Corbis via Getty Images hide caption 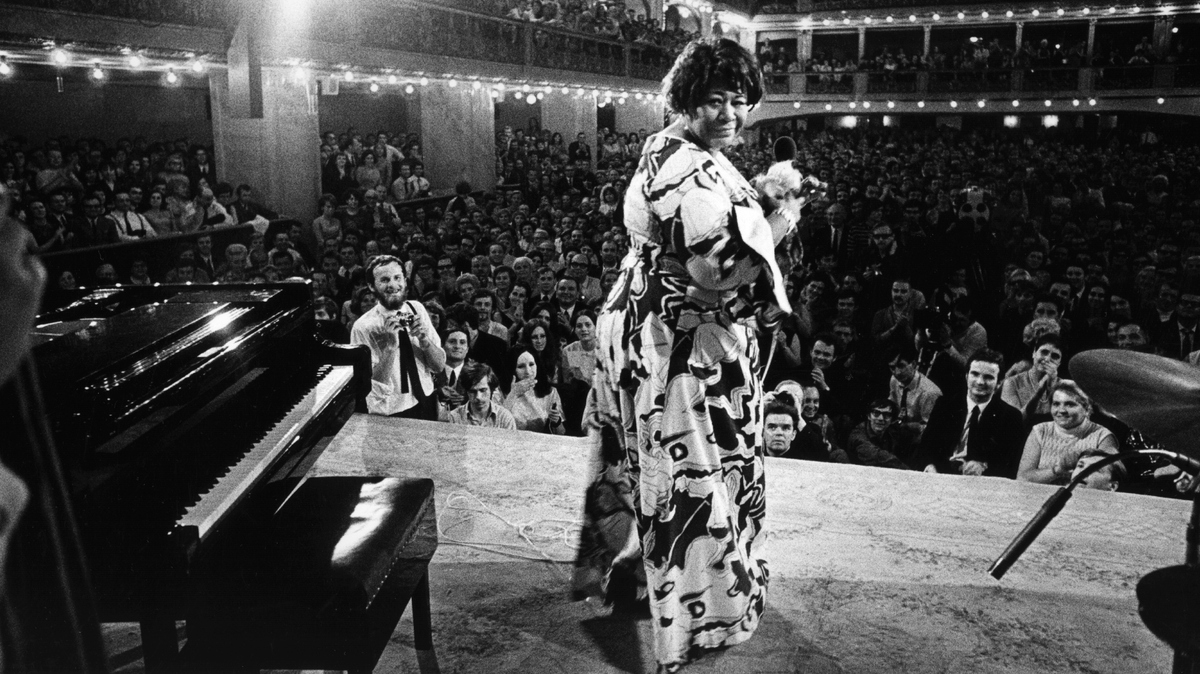 Ella Fitzgerald, performing in 1969 at Lucerna Hall. In 1967, she began singing "I Can't Stop Loving You" as a way into the soul world.

Ella Fitzgerald often said, "I'm not going to be left behind. If you don't learn new songs, you're lost." The year was 1967 and she was 51 years old. She said more in 1968: "I want to stay with it. And staying with it means communicating with the teenagers. I want them to understand me and like me." Youth was listening to soul, a new keyword in black popular music, whose powerful musical and political currents were converging around 25-year-old Aretha Franklin. Proclaimed "Sister Soul" in Ebony (October 1967), and the "Sound of Soul" on the cover of Time Magazine (June 1968), Franklin had rocked the music industry with a string of hit singles and albums. It was time for Ella to go to "Soulsville," as she called it, for a stopover.

In 1967 Fitzgerald began singing "I Can't Stop Loving You" as a way into the soul world. She chose wisely. In 1962, Ray Charles had transformed this country ballad — released by its composer, Don Gibson, in 1957 — into a crossover chart-busting hit. By 1967 it had been recorded by a wide range of musicians, including Count Basie (who won a Grammy with Quincy Jones's arrangement), Frank Sinatra, Dinah Shore and Duke Ellington. So why not Ella? Further, because "I Can't Stop Loving You" had reached a global audience from the USA to Norway to Australia to Israel, as Fitzgerald toured around the world, she could count on audiences knowing it.

Ella sang "I Can't Stop Loving You" on several dates between 1968 and 1972. Although she never went into the studios of her record label, Verve, to record the tune, a few versions currently available come from albums of live dates between these years. One transcends them all: her performance taped at the Deutschlandhalle in West Berlin on February 11, 1968 for broadcast on West German Public Television.

Coming at the end of a long recital, her ten-minute performance defies categories. Even though it makes its impact through improvisation, it is not a scat classic like "How High the Moon." It is part song, part monologue, part dialogue as she talks to the musicians, to the audience and to herself. It is unique, leaving us with the possibilities of multiple interpretations, as great art often does.

Fitzgerald's experiment in bringing soul, jazz and gospel into conversation was a journey for everybody, but especially for her. And its effects would be felt in the rest of Fitzgerald's career, in particular throughout the 1970s. She learned from this experience, and her assimilation and internalization of soul idioms into other songs in her repertoire in later years helped her in terms of both her craft and her longevity as a singer. In this performance, we see Fitzgerald in a moment of a truly improvised, flexible conversation across musical eras and styles.

The Berlin performance begins with a riveting moment. Sashaying on stage, twirling her trademark handkerchief to a burlesque riff, she unfurls a long mesmerizing solo on "I"— only to stop the action by sharing a private joke with the band, turning her back on her audience. She has total confidence that her intimate collaborators —Tee Carson at the piano, Keter Betts on bass and Joe Harris on drums — will follow her flights of fancy.

Then, the first five minutes of "I Can't Stop Loving You" are vocal luxury. Unleashing her sublime voice in her prime, Fitzgerald pours her passion into the melody, bending pitches, elongating particular words, shifting dynamics, moving ahead or behind the beat. As Aretha Franklin did with her cover of Otis Redding's "Respect," so does Fitzgerald alter the subjectivity from a male to a female point of view. Nostalgic wallowing yields to assertive recriminations.

"I know someone someone someone someone told you a lie / What a lie," reiterates the wages of betrayal. We are on the way to a feminist torch song, with its demands for justice in love. Then, before the last line reaches closure, the drummer Joe Harris steps into a different role, helping her launch her improvisation.

Then, strange as it may seem, she stops singing the song. These next few minutes show Fitzgerald playing with the persona of a gospel preacher to testify not about religion but about romantic love and sexual desire. She is testifying and in flow through a "stream of consciousness" event, to borrow William James' phrase. In an extended pastiche of phrases linked by the subject of sexuality and pain, she weaves multiple allusions to Aretha Franklin's ""I Never Loved a Man (The Way I Love You)"" and "Respect." "Sock it to me / Give it to me all night long," Fitzgerald says, with a half-smile in her voice, hollering, swooping through chanting, moaning and shaking in gospel testifying.

The Voice That Shattered Glass

The few bemused murmurs from a few in the crowd acknowledge the sardonic approach going on here. She distances herself from the idea she is going to "tell everything," letting the audience in on the joke. Fitzgerald is "signifying," a term from African American culture which the scholar Henry Louis Gates made popular in his transformative book of literary criticism, The Signifying Monkey. "Signifiying" takes in many attitudes and strategies, ranging from satire, parody, irony, quotation and radical juxtapositions, homage and subversion.

In this section of the song, Fitzgerald takes on the trope of "Our Man" and invokes the ways popular music encourages women to talk about him from the perspective of a "Modern Woman," an archetype that was evolving at the dawn of second-wave feminism. Fitzgerald interpolates quotations and free-associates with "Alright, Okay, You Win" (1958), the latter evoking both Joe Williams and Peggy Lee; and "Tears on My Pillow," a rhythm and blues song popularized by Little Anthony and the Imperials in 1958. As she adopts the persona of an African American preacher, the "Holy Spirit" is taking over and she is in flow.

But not for long. The most startling, radical bit in "I Can't Stop Loving You" happens around six-and-a-half minutes into the performance. It shows how much Ella trusts her audience to go with her twists and turns. Breaking the mood of testifying, Fitzgerald drops her preacher's robes from her shoulders. As if waking from a self-induced trance, Fitzgerald confesses in a normal street voice — shocking to hear from the stage — "This ain't my bag."

What is her bag? She sings her authentic self, she tells us, at this stage of the journey into Soulsville. It is her moment of vocalizing Shakespeare's idea of "To Thine Own Self Be True." Her "bag" is singing music most closely identified with her success. And so, instead of "I Can't Stop Loving You," she sings Duke and Gershwin's 1936 "I Can't Get Started (With You)," a classic ballad from the American Songbook (not yet termed "Great"—that will come later). She sings, not "screams," a term she sometimes applies to soul singing in general. She reaffirms her confidence in the cultivated voice, not necessarily "trained" — if by that term we mean opera singing — but rather, a mid-century modern voice seeking clarity of tone, balance and poise.

What to think? Has the preceding amounted to little more than a comic simulacrum, a persona, a mask adopted in pursuit of a musical adventure? Is she now "telling it like it is?" It is an unanswered question. By this time, the Tee Carson Trio has given up trying to follow the singer, who has turned into a runaway vehicle, and they sit back and wait.

Another lyric with "can't" in it — this time "Can't Help Lovin' Dat Man" from the musical Show Boat (1927) — signals a shift in direction. Persisting in her bemused quest to turn a Berlin audience into an African American congregation, Fitzgerald behaves again like a preacher, exhorting them, thrusting the microphone into the faces of front-row folks, asking one woman after another in a demure posture: "Do you love your man?"

It is a mock question, a virtual paraphrase of "do you love Jesus:" Who in this respectable white middle-class Berlin audience would reply? Who wants to respond to this send-up of outreach? It is a bit of stage humor signifying on the premise of the stage as a separate space and on the rhetorical strategies of evangelical preachers. Positioning herself as more of a stand-up entertainer more than preacher, Fitzgerald laughs and delivers another street-voice riposte: "There is silence." The audience laughs in complicity. We are in this game together.

It is not clear what could or should or will happen next. For a moment it appears as if a return to the song is imminent. Enough, perhaps. But no, no, no, no, no. Instead, the singer has one more moment of testifying.

One wonders who in the audience understood the import of this description. Perhaps it was enough to know that she was talking about herself in such personal terms even if no legs, skinny or otherwise, were in view. Here is a clarifying reference from an interview she gave for Essence Magazine in 1985:

"I used to go to a theater on 148th Street [in Harlem] all the time. I'll never forget. My legs were so skinny, I used to wear boots so nobody could see the bottom of my legs. They would see me coming, and they'd say, 'Oh, here's that little chick with them boots on.'"

Preaching about preaching, preaching about not preaching, singing soul and then talking about not singing soul: In the end, the practice of confessing and testifying stimulated an old memory. Fitzgerald winds down this performance with the refrain from the original song, but it is almost beside the point. Soul was truth-telling and it got to her. This moment shows how much she trusted her audience to love and accept her, which in turn allowed her to take the risks which made the second half of her Berlin performance so magical. The process has triumphed over the material, making the experience more important than the song. Because of this, Fitzgerald did not abandon soul. On the contrary. She assimilated its idioms and its priorities into her craft in the 1970s. Soulsville turned out to be another way to tell it like she is.