Accessibility links
Judge In Alabama Allows States To Intervene In Census Apportionment Lawsuit A judge is allowing New York and others to intervene in Alabama's lawsuit challenging the long-standing inclusion of unauthorized immigrants in census numbers used to divide up seats in Congress. 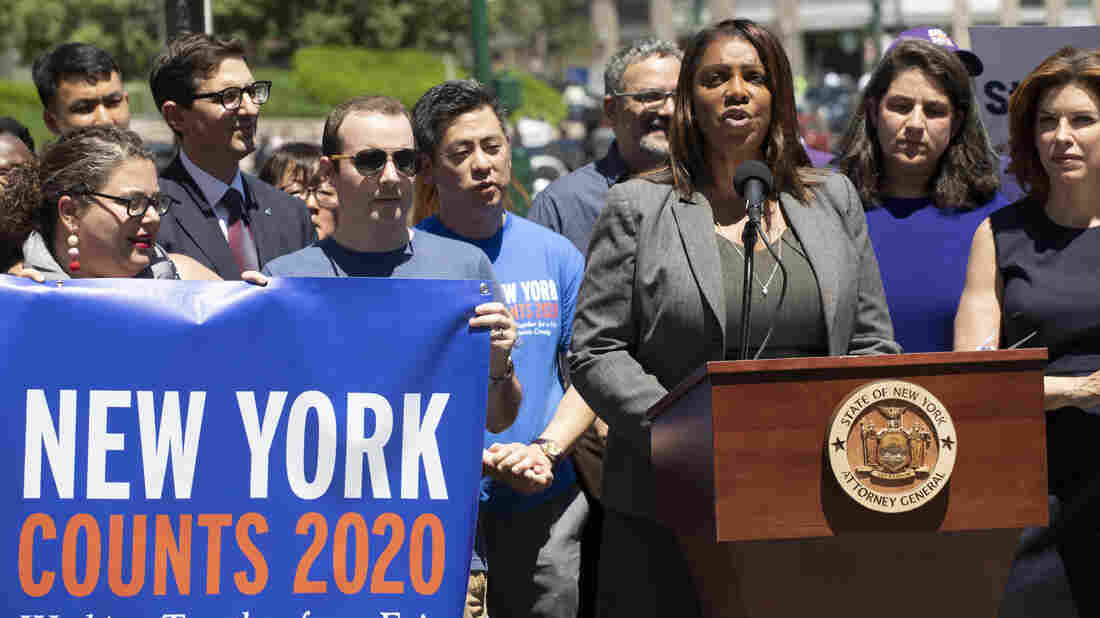 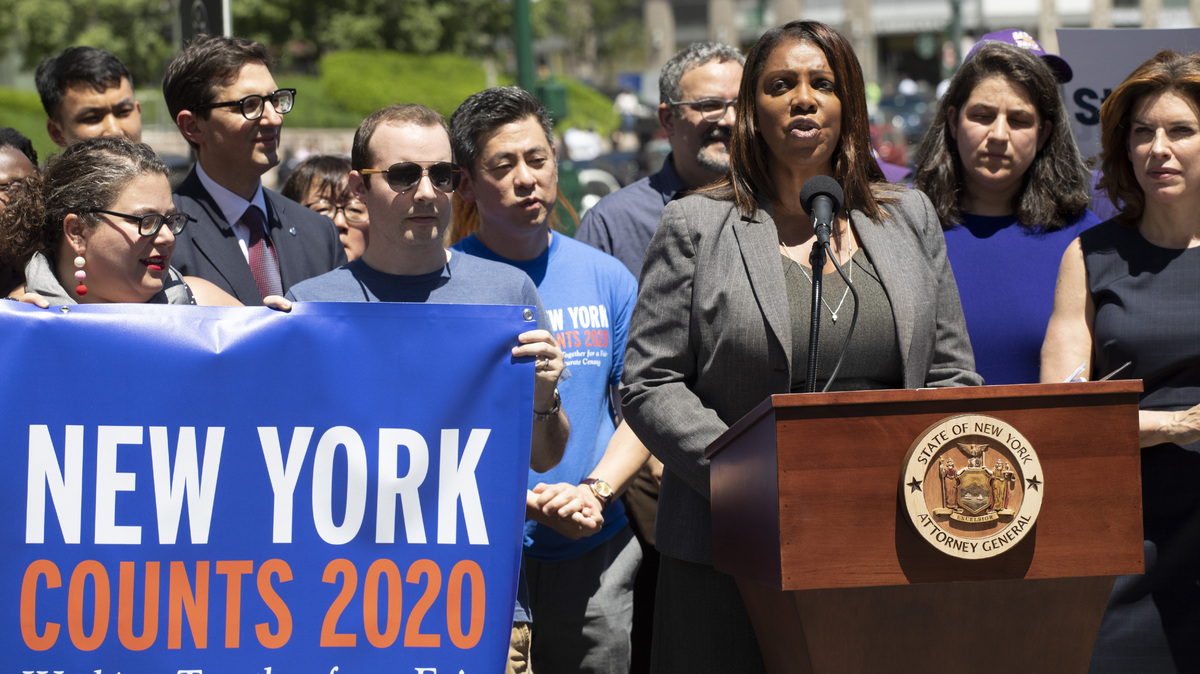 New York State Attorney General Letitia James speaks at a June news conference in New York City. James' office is now leading a coalition of states and other groups in defending the Census Bureau's long-standing policy of including unauthorized immigrants in population counts used for reapportioning seats in Congress.

A federal judge is allowing a New York-led coalition of 15 states and other groups to defend the Census Bureau in a lawsuit brought by Alabama, the New York state attorney general's office said Friday. Alabama is challenging more than 200 years of precedent in how the federal government divides up congressional seats — using population counts that include unauthorized immigrants.

The decision by U.S. District Judge R. David Proctor of Birmingham, Ala., who released a formal court ruling on Sept. 9, raises the profile of this census lawsuit, which was once overshadowed by the more-than-yearlong legal battle over the Trump administration's failed attempt to add a citizenship question to 2020 census forms.

Attorneys for the coalition, headed by the New York state attorney general's office, say they were prompted in part to intervene by comments in July from U.S. Attorney General William Barr that raised questions about whether the Trump administration would fully defend the bureau in the lawsuit.

"We are intervening in this case because the federal government is failing its obligation to represent the American people, and this lawsuit deserves a robust defense," New York State Attorney General Letitia James said Friday in a written statement. "We will continue to fight to ensure that every person residing in this country is counted — just as the framers intended."

Since the first national head count in 1790, the federal government has always included both U.S. citizens and noncitizens, without regard to immigration status, in the once-a-decade population counts of "persons" living in the U.S., as required by the Constitution. The number of congressional seats and Electoral College votes each state receives is determined by those numbers.

But the state of Alabama, along with U.S. Rep. Mo Brooks — a Republican from the state — filed the lawsuit last year, arguing that the framers of the Constitution did not intend for unauthorized immigrants to be counted as "persons" for apportionment.

In July, Barr took part in the Trump administration's announcement that it would rely on existing government records to produce detailed citizenship data rather than adding a citizenship question to census forms. Referring to Alabama's lawsuit, the attorney general said those data could be "relevant [to] a current dispute over whether illegal aliens can be included for apportionment purposes."

"We will be studying this issue," Barr added.

On Friday, the Census Bureau's chief scientist, John Abowd, confirmed that the agency is planning to release apportionment counts next year that include citizens, unauthorized immigrants and other noncitizens.

"The Census Bureau has not changed the method by which apportionment calculations will be calculated from census data and its processing," Abowd said during a meeting of the Council of Professional Associations on Federal Statistics in Washington, D.C.

Abowd's statements came after more than three weeks of silence from the bureau on its plans for the 2020 apportionment count. While the agency's website says that congressional apportionment is "based upon the total resident population (citizens and non-citizens) of the 50 states," the bureau had not directly responded to NPR's question last month about whether unauthorized immigrants would be included.

Proctor is also permitting the city of Atlanta and Virginia's Arlington County to join the lawsuit in defense of the bureau, attorney Dorian Spence of the Lawyers' Committee for Civil Rights Under Law — one of the legal organizations representing the local governments — tells NPR.

Outside of the lawyers committee, other groups that have also said they don't trust the administration to properly defend the bureau have already stepped in to intervene in the case, including groups represented by the Mexican American Legal Defense and Educational Fund.

Attorneys for the coalition of states say they are uniquely positioned to defend the bureau's policy because the states are at risk of losing congressional seats and, as a potential result of reduced voting power on Capitol Hill, their fair share of federal funding.