Accessibility links
Book Review: 'Dear Haiti, Love Alaine' By Maika Moulite And Maritza Moulite Sisters Maika and Maritza Moulite tackle heavy issues in this novel about a girl who gets sent to live with her aunt in Haiti, and discovers more than she bargained for about the women of her family. 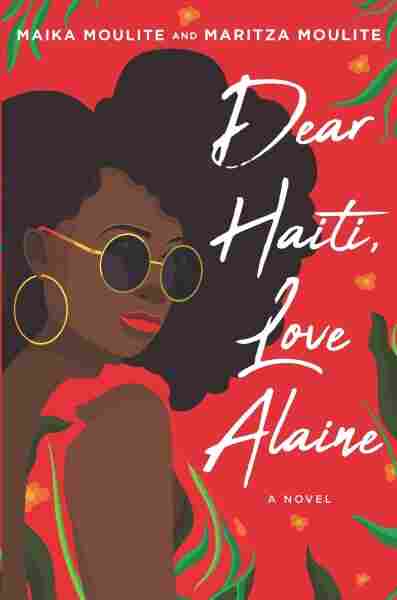 by Maika Moulite and Maritza Moulite

It's that time of year again. Fall is right around the corner. Pumpkin spice fills the air. Kids are going back to school, the days are getting shorter, and books are getting heavier. The pie-in-the-sky, read-them-in-one sitting summer-blockbuster releases now make way for complex novels filled with luscious prose, years of history, and serious issues. Books just like Maika and Maritza Moulite's Dear Haiti, Love Alaine.

The novel is an epistolary collage of emails, articles, transcripts, letters, postcards, diary entries and more, presented in a way that creates a spellbinding narrative. The glue that ties them all together is the clever and mildly sarcastic voice of the main character, Alaine Beauparlant, daughter of Jules and Celeste Beauparlant, divorced Haitian immigrants.

Alaine lives with her father in D.C. and is a senior at the prestigious Saint Catherine de'Ricci Academy. Alaine's mother is the wildly popular host of a political roundtable TV show — she gets the action going by inexplicably slapping a Florida senator on live television during a debate, and disappearing to Haiti with little explanation. As a way to get back at her classmates for making her the butt of every joke, Alaine turns her Latin American History creative writing project into a spectacle that threatens to get her expelled. To soften the blow, her parents and the Sisters create an independent "immersion project" for Alaine. They send her to Haiti for the rest of the school year to intern at a child sponsorship program with her aunt, the Hatian Minister of Tourism.

Dialogue Drives The Story In 'The Silence Between Us'

At which point both Alaine and the reader step through the looking glass into a world thick with beauty and rich with history. Alaine learns that the women of the Haitian Revolution were far more influential than history books led her to believe — especially as one of them was her several-generations-great grandmother. This grandmother was also the one who, according to family history, was cursed. Darker and darker secrets are revealed, as Alaine treads further into the wilds of vodou and blood magic. How much does she truly believe? And if she does believe, how far is she willing to go to lift a centuries-old family curse?

'Dear Haiti, Love Alaine' is a dense and beautiful tapestry of heavy issues, with even more heavy issues woven in throughout.

Dear Haiti, Love Alaine is a dense and beautiful tapestry of heavy issues, with even more heavy issues woven in throughout. It tackles divorce, race, class strata, immigration, Alzheimer's (which I totally wasn't expecting) abuse, vodou, fate versus free will, and Haiti's past and present. In fact, Haiti itself is a character that comes spectacularly to life. The book becomes an immersive experience for the reader too, as we become just as wrapped up in the rhythm and magic of the country as Alaine. There's even a touch of romantic flirtation with a handsome fellow intern, just to round things out nicely.

I'm not sure I was ready to dive into such a hard-hitting novel, but I'm very glad I did. Alaine's adventures in Haiti were so intense and engaging, I could almost feel the dirt beneath my fingernails, could almost smell the peanuts and plantains. But I think my favorite part was ultimately the female empowerment that permeated every part of this tale, past and present. It left me with a sort of Practical Magic feeling, and that is never a bad thing.

Maika and Maritza Moulite have created quite the masterpiece here. I look forward to seeing what they do next!