Accessibility links
Hurricane Dorian Finally Makes Landfall In N.C., After Days-Long Delay With maximum sustained winds of about 90 mph, Dorian was a Category 1 storm when its eye crossed over Cape Hatteras. It is now moving northeast at 24 mph. 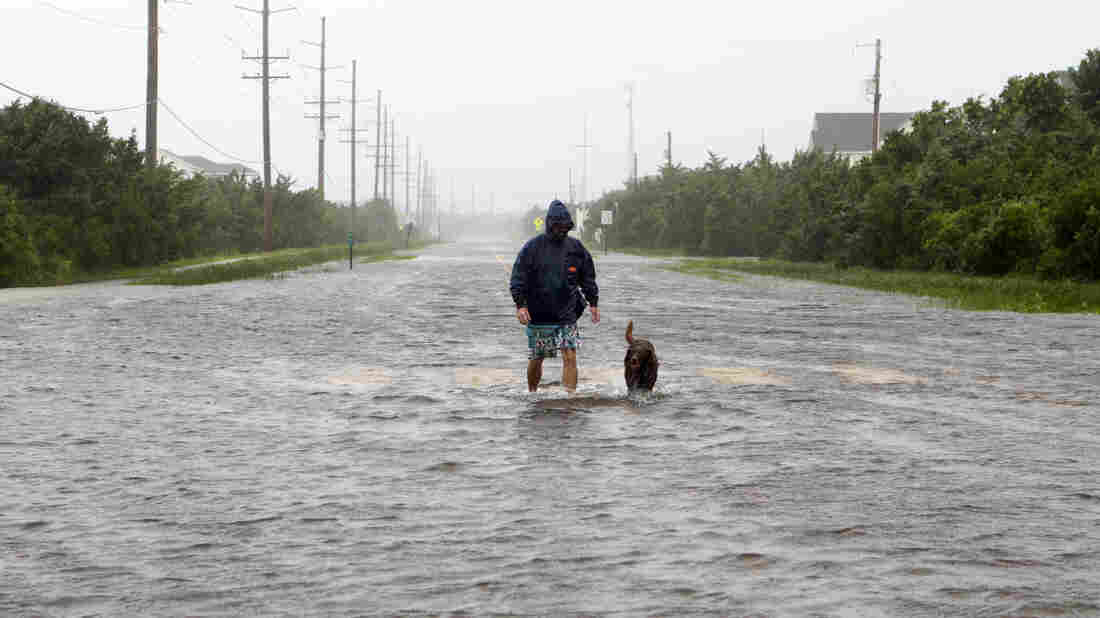 A resident walks his dog on a flooded road Friday in Salvo, N.C., in the Outer Banks, as Hurricane Dorian drenches the neighborhood with a torrential downpour. The storm made landfall Friday morning as a Category 1 hurricane. Jose Luis Magana/AFP/Getty Images hide caption 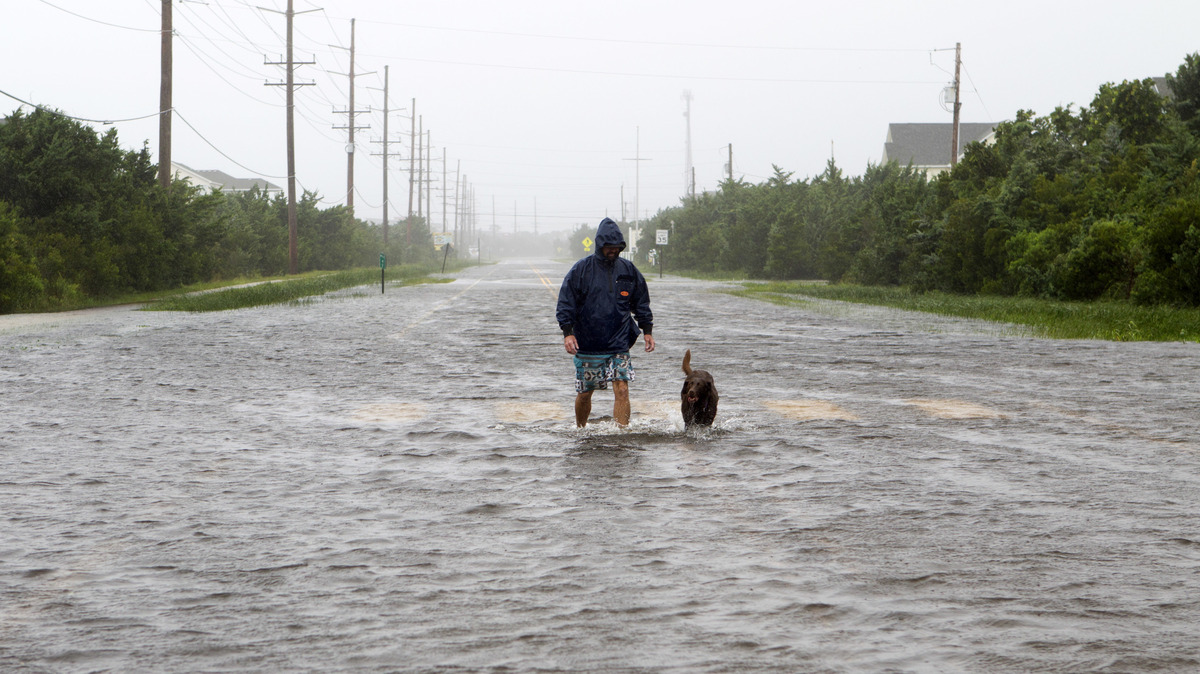 A resident walks his dog on a flooded road Friday in Salvo, N.C., in the Outer Banks, as Hurricane Dorian drenches the neighborhood with a torrential downpour. The storm made landfall Friday morning as a Category 1 hurricane.

After days of drenching the U.S. Southeast from its perch offshore, Hurricane Dorian finally came ashore Friday morning. The National Hurricane Center says the eye made landfall over Cape Hatteras, N.C., at 8:35 a.m. ET, with maximum sustained winds near 90 mph — making Dorian a Category 1 storm when it hit.

Dorian won't linger the way it did to devastating effect in the Bahamas, though. It has steadily sped up its forward motion and is now moving northeast at 25 mph, the NHC says in its 11 p.m. ET update.

"Dorian racing northeastward away from the Mid-Atlantic states...expected to bring hurricane-force winds to portions of Nova Scotia by late Saturday," the NHC says.

Dorian is extending hurricane-force winds for up to 80 miles from its center; tropical storm-force winds extend outward for up to 230 miles. Northeastern North Carolina is forecast to get an additional 3-8 inches of rain with isolated totals of 15 inches possible, raising the risk of flooding.

The radar view Hurricane Dorian making landfall at Cape Hatteras NC at 835 am this morning. At 10 am Dorian was located 25 mi northeast of Cape Hatteras moving to the northeast at 14 mph. Maximum sustained winds were 90 mph. pic.twitter.com/orw6RwWBAU

So far the Outer Banks, a cluster of barrier islands that includes Hatteras, has been the hardest hit by Dorian's first push ashore. The local National Weather Service declared a flash flood emergency for two other Outer Banks islands, Hyde and Dare, with water levels "expected to inundate 1st floors of homes."

It is not the rainfall that is driving these flood conditions so much as the storm surge across the island chain, where some meteorologists reported the water rising "five feet in less than an hour." In his 10 a.m. ET briefing, North Carolina Gov. Roy Cooper warned of a rising storm surge of 4-7 feet.

Those warnings accord with recent images posted by residents and members of the local media on the N.C. coast depicting a waterlogged landscape bobbing with debris.

Despite those conditions, North Carolina authorities say they have not received any reports of serious injuries or deaths. Several tornadoes touched down Thursday, Cooper said, and dealt "significant damage" to nearby buildings — but they apparently left residents largely unscathed.

"Preliminary reports we're getting from local officials, at least in the southeastern part of the state, say the storm is not as bad as feared — which is a positive thing," Cooper told reporters. "But we have to remember that this storm is still raging in the northeastern part of our state and the Outer Banks, and things there potentially could be worse than we had feared. So we just don't know yet."

All told, Cooper said, there have been about 215,000 power outages statewide. In South Carolina, meanwhile, there were more than 150,000 outages as of Thursday morning. But as officials and locals acknowledge, it could have been worse.

"These hurricanes at the last moment have a mind of their own. And they were coming at high tide. It could've been a real mess," Les Detterbeck, a resident of Charleston, S.C., told NPR. "So we dodged a bullet." 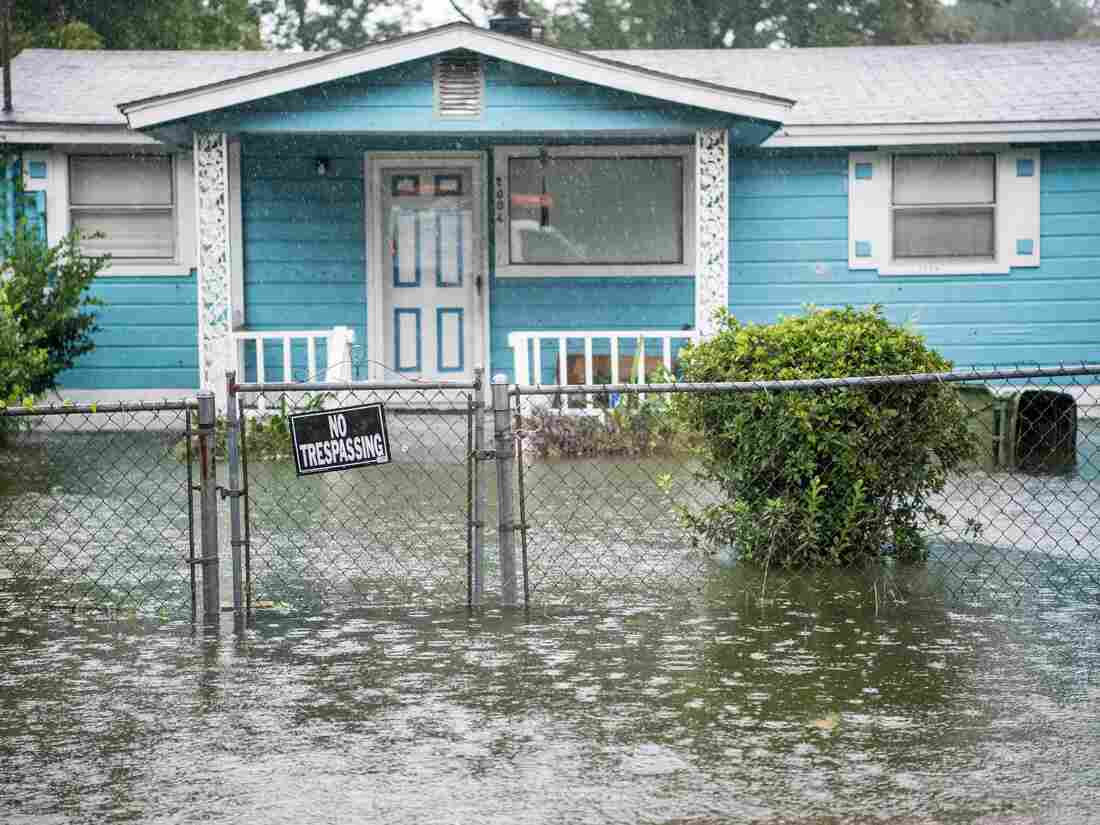 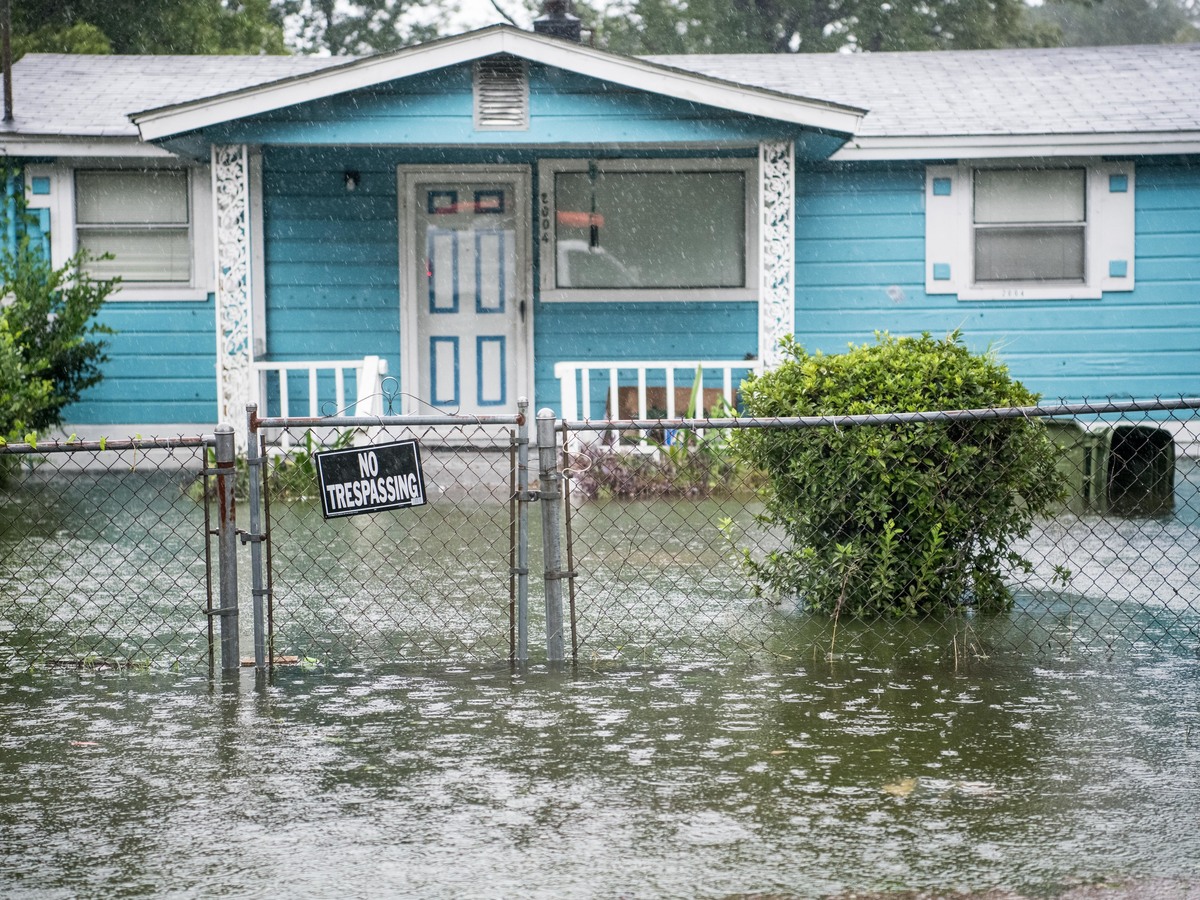 Floodwater swamps the front yard of a home in Georgetown, S.C., on Thursday. Hurricane Dorian caused extensive power outages in both Carolinas as wind and rain knocked down trees and power lines.

Parts of North Carolina and Virginia remain under a hurricane warning, but in a sign of the storm's predicted northeastward path over the open Atlantic Ocean, the only hurricane watch farther north that's now in effect is for the Canadian province of Nova Scotia. In its 11 a.m. ET update, the NHC also issued a tropical storm warning for areas east of Bar Harbor, Maine, to Eastport, Maine.

A tropical storm warning is in effect for a broad area of the Eastern Seaboard, from parts of the Chesapeake Bay to Nantucket and Martha's Vineyard, Mass.

"The center should move to the southeast of extreme southeastern New England tonight and Saturday morning, and then across Nova Scotia late Saturday or Saturday night," the NHC says.

That said, the storm's path has at times proved elusive to forecasters, who originally predicted that Dorian would make its landfall in the U.S. on Florida's central eastern coast on Labor Day. Instead, the hurricane lingered for days offshore, drenching parts of Florida, Georgia, South Carolina and North Carolina with its rain bands.

Indeed, Dorian has spared the U.S. mainland the worst of its fury, after obliterating buildings and inundating towns with water in the Bahamas, where it made landfall as a Category 5 hurricane over the weekend.

At least 30 deaths are blamed on the storm, and hundreds of people are missing in the country as rescue and relief crews struggle to assess the damage, recover the dead, and reach people who need help.