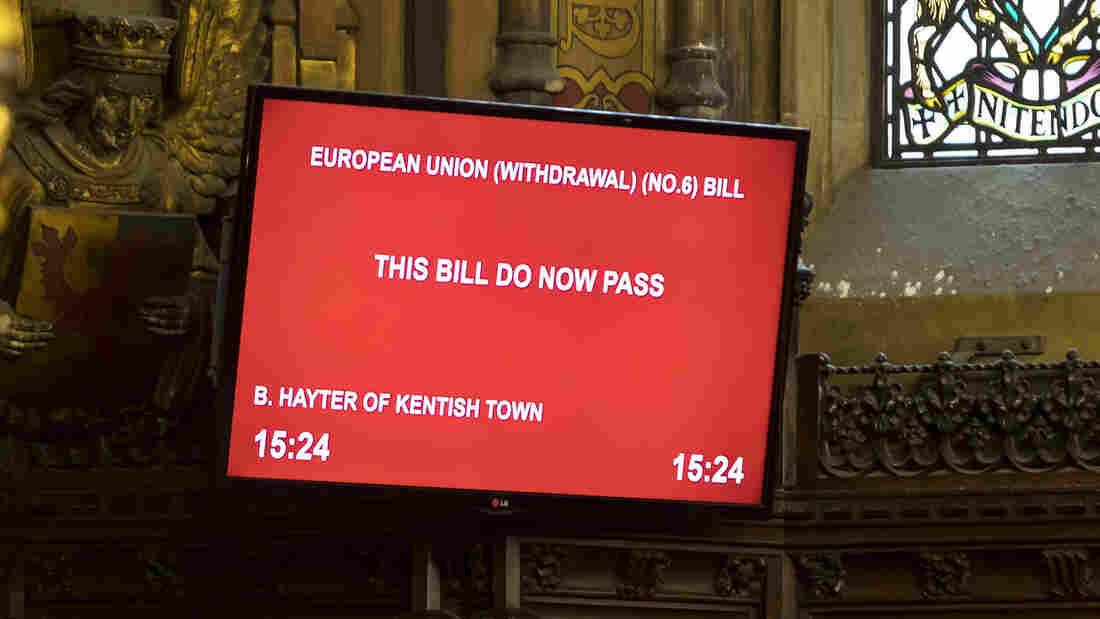 A monitor in the House of Lords shows its approval of a bill blocking a no-deal Brexit Friday. Roger Harris/House of Lords hide caption 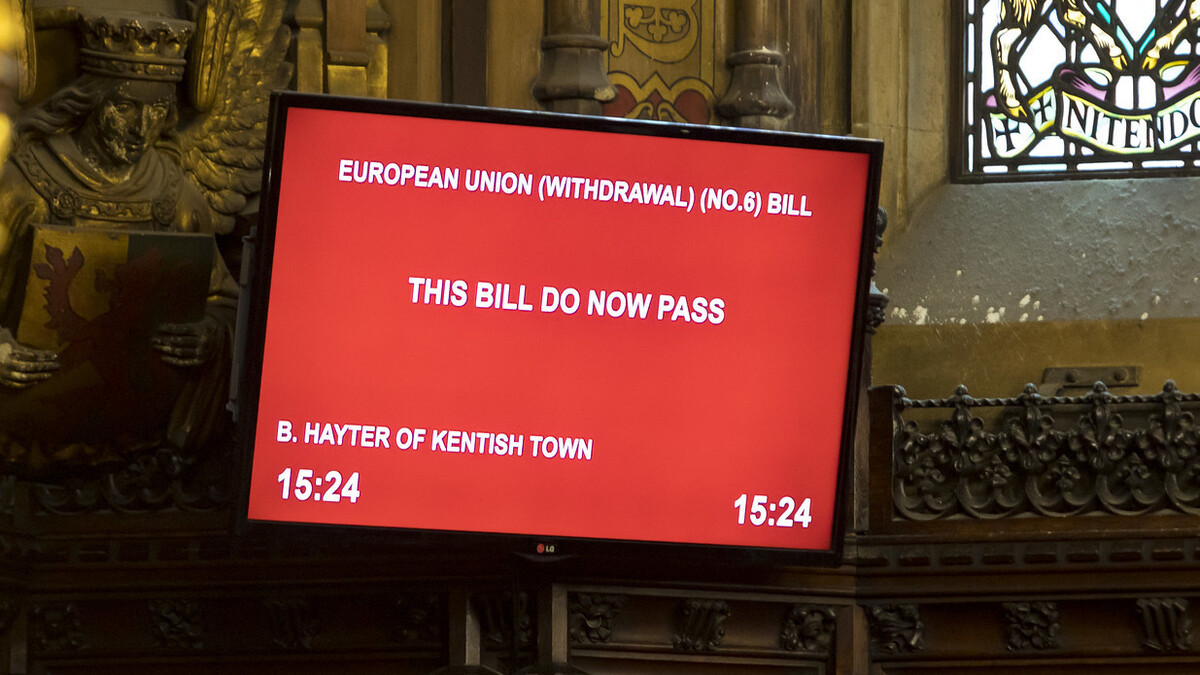 A monitor in the House of Lords shows its approval of a bill blocking a no-deal Brexit Friday.

Britain's House of Lords endorsed a measure Friday that would block Prime Minister Boris Johnson's plan to leave the European Union next month without a deal in place, giving final approval to a bill the House of Commons passed earlier this week.

The House of Lords' passage was widely expected after the bill won approval in the House of Commons on Wednesday. The legislation now proceeds to royal assent — a formality that will result in its becoming law.

The legislation would force Johnson to formally ask the European Union to extend the Brexit deadline through next January, if a new withdrawal deal is not agreed upon by Oct. 19.

The current Brexit deadline is Oct. 31.

When Johnson took the U.K.'s top job less than three months ago, he promised to adhere to the exit date — even if no detailed blueprint to carry out Britain's complex divorce from the European Union has been agreed upon.

Johnson says the only way forward is for Britain to hold snap elections on Oct. 15. So far, neither chamber of Parliament has agreed to that election date; another vote is planned for Monday, after the Brexit legislation becomes law.

Johnson needs two-thirds support of Parliament to hold elections. But earlier this week, the lower chamber rejected his request by a vote of 298-56. And opposition parties promise to block the request again on Monday.

Arguments over snap elections and a no-deal Brexit are the latest chapter in the Brexit saga that has unfolded since 2016, when voters approved a referendum for the country to leave the EU. And with Parliament back in session, it has been a tumultuous week for Johnson.

On Thursday, the prime minister's brother, Jo Johnson resigned as a member of Parliament. He tweeted that he was "torn between family loyalty and the national interest." Jo Johnson called it "an unresolvable tension" and said others should take on roles in Parliament. He ended his tweet with "#overandout."

On Wednesday, the House of Commons voted on its bid to quash a no-deal Brexit — a defeat for Johnson that came a day after another a pair of political setbacks.

The moment when @DrPhillipLeeMP crosses to sit with the Liberal Democrats: pic.twitter.com/27dOWhQw1z

On Tuesday, a defection from Johnson's Conservative Party stripped him of his single-seat governing majority — in a dramatic scene that played out as Johnson addressed the chamber. On the same day, 21 members of Johnson's party joined with the opposition to strip from him control of the chamber's agenda.

Finally, on Friday, Johnson was given at least one bit of positive news: London's High Court rejected a legal challenge that seeks to block the prime minister from suspending Parliament for weeks. Johnson's prorogation plan gained the consent of Queen Elizabeth II last week. 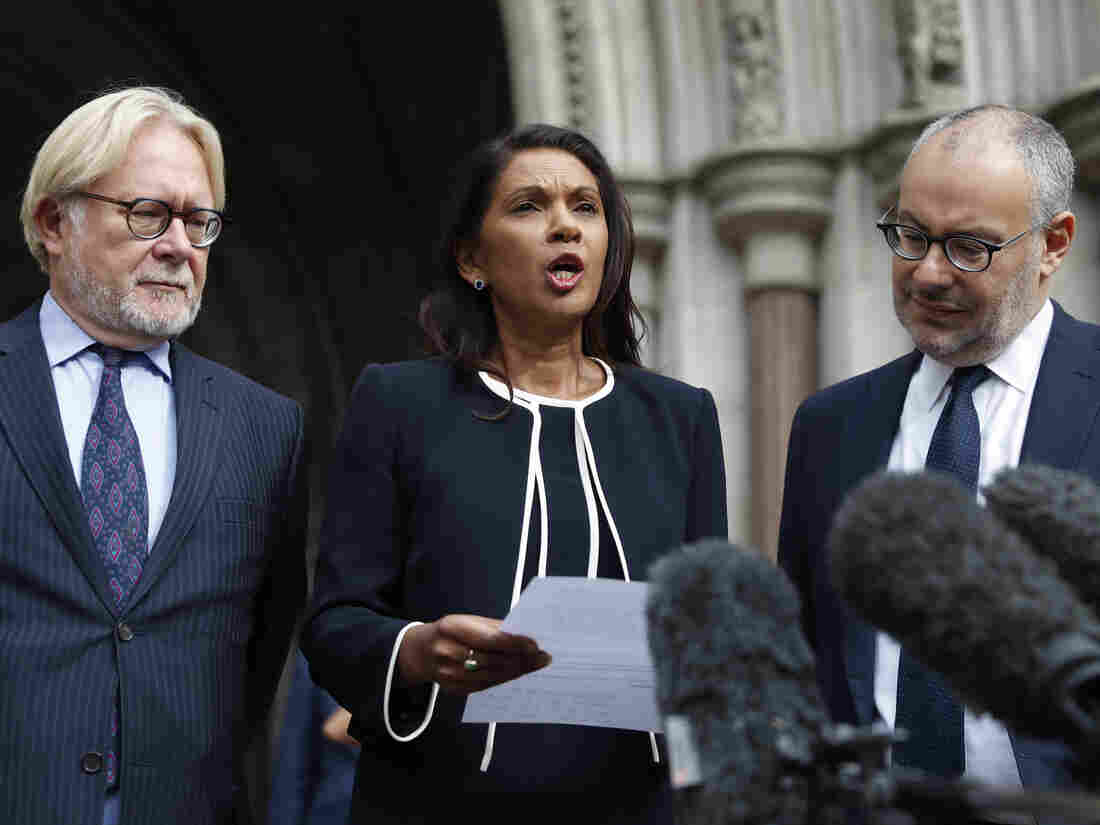 Anti-Brexit campaigner Gina Miller speaks to the media outside the High Court in London on Friday. Alastair Grant/AP hide caption 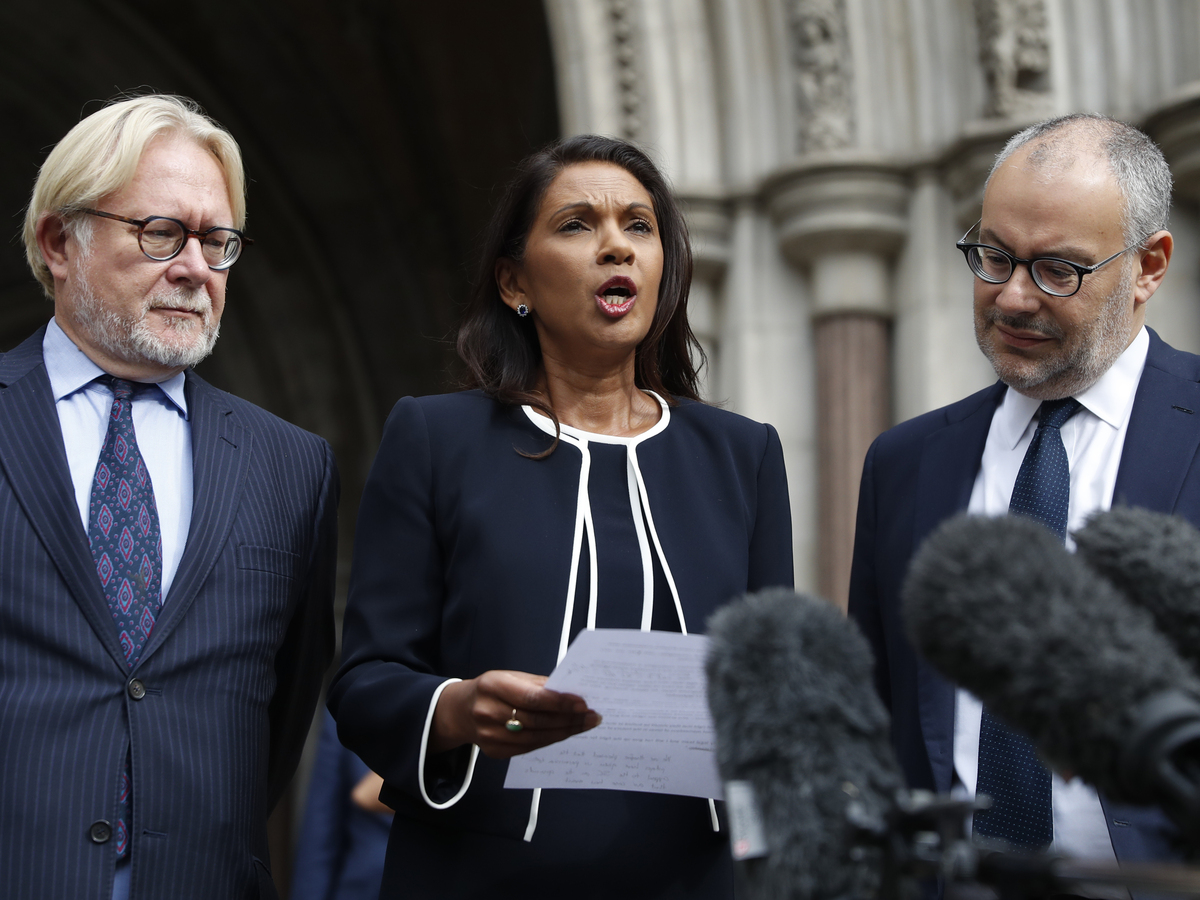 Anti-Brexit campaigner Gina Miller speaks to the media outside the High Court in London on Friday.

"Rejecting Ms Miller's case, Lord Chief Justice Lord Burnett said she could immediately appeal because of the important points of law at stake.

"The appeal is expected to be heard at the Supreme Court on 17 September."