Accessibility links
Cleaning Up Abandoned Wells Proves Costly To Gas And Oil Producing States Abandoned gas and oil wells dot many states. These orphaned sites need to be capped and cleaned up, but doing so is difficult when the responsible companies have gone bankrupt. 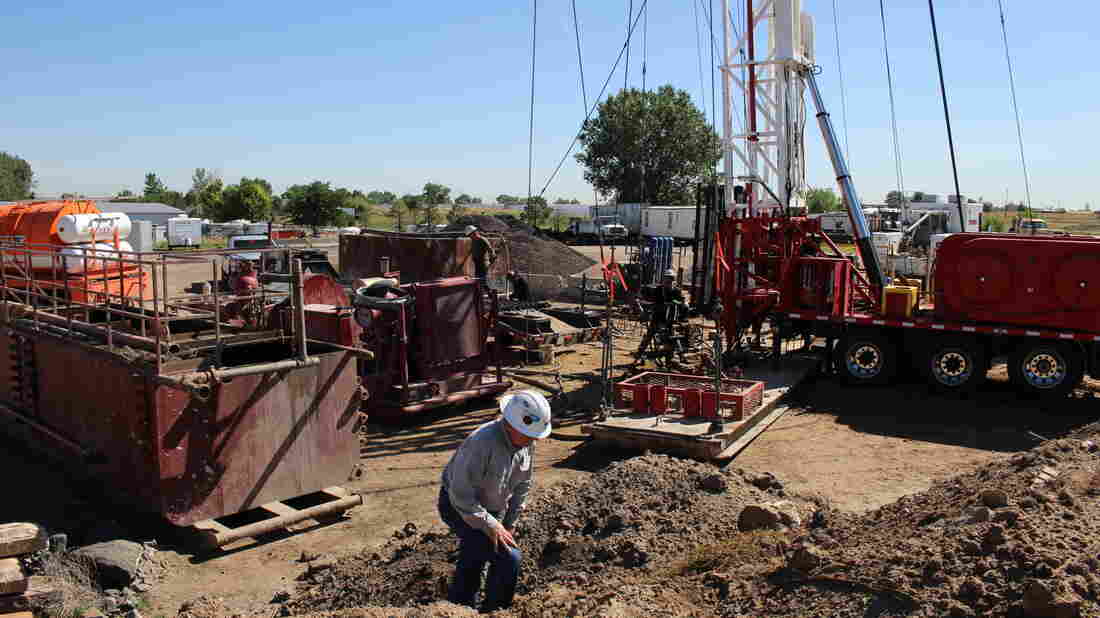 Mike Hickey works on capping an an orphaned well in Adams County, Colo. The EPA estimates there are more than 1 million abandoned gas and oil wells across the country. Matt Bloom/KNUC hide caption 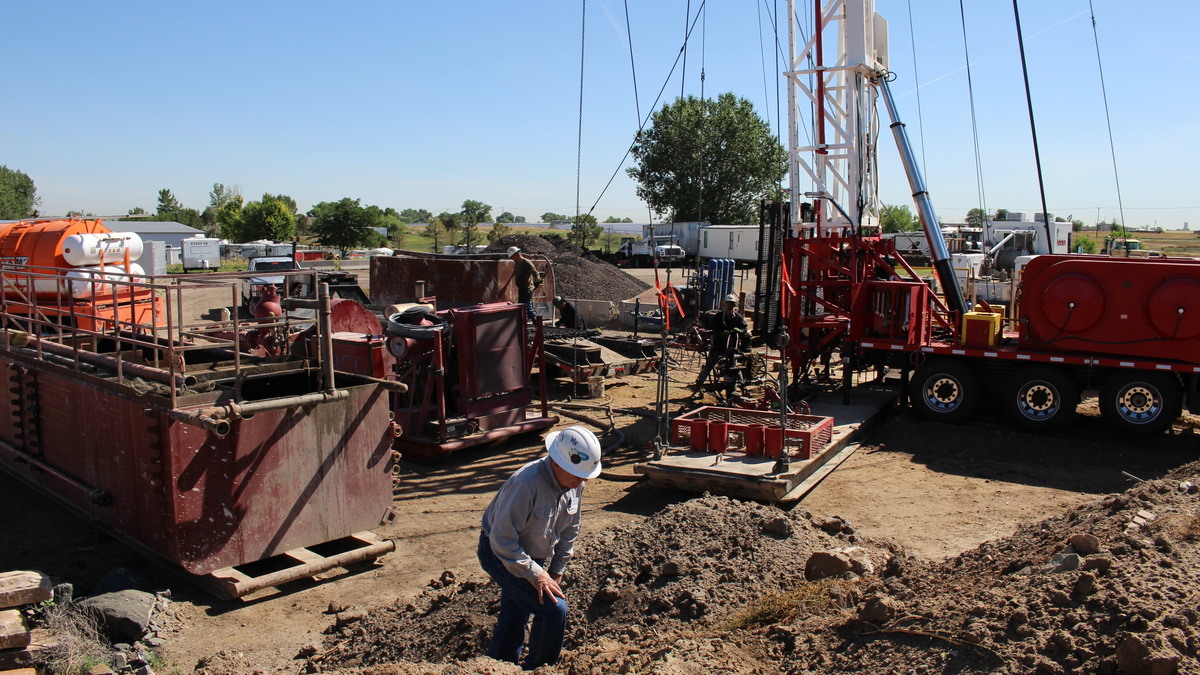 Mike Hickey works on capping an an orphaned well in Adams County, Colo. The EPA estimates there are more than 1 million abandoned gas and oil wells across the country.

Half a dozen men in hard hats watch as their construction rig rises more than 100 feet. On top, an American flag flutters in the sun. At the work site in Adams County, Colo., northeast of Denver, the crew is preparing to close off an abandoned well.

Instead of drilling a mile beneath the surface to extract oil, they're about to rip pipe out of the ground. In its place, they'll leave concrete plugs strong enough to seal the hole permanently.

The well in question is known as an "orphaned well." When oil and gas companies go bankrupt or stop taking care of their equipment, their wells fall into the state's hands.

As the Trump administration looks to roll back regulations to boost the oil and gas industry, more states with growing energy production are grappling with how to handle these types of wells, some of which pose a danger to nearby homes and schools.

The EPA estimates there may be more than 1 million of these orphans scattered across the country.

Last year in Colorado, the state Legislature approved a tenfold increase in funding for orphaned well cleanup. States like Alabama and Ohio have followed suit. As did Pennsylvania, where the state Department of Environmental Protection estimates there could be up to 560,000 abandoned wells.

This led to crews like the one working northeast of Denver, which are saddled with demanding schedules, heavy equipment, explosives and other factors that make working conditions dangerous.

Some orphaned wells are more than 100 years old. Others were drilled within the past decade. Many lack proper state records, meaning crews have to improvise when cleaning them up.

At the edge of the site, Mike Hickey, an engineer with the Colorado Oil and Gas Conservation Commission's orphan well unit, braces himself for the day ahead.

"We never operated this well," Hickey said. "So we're not completely sure what's in it until we start pulling it out."

In front of him, the rig fires up.

There are a variety of ways wells become abandoned. In the case of the one northeast of Denver, the owner got sick about three years ago, racked up violations and lost his drilling rights, according to state records.

The Colorado Oil and Gas Conservation Commission knows of 275 orphaned wells and 422 associated locations or facilities. There are likely many more.

In Wyoming, thousands of wells were orphaned in 2014 after a coal bed methane bust. Their owners lacked the money to clean them up, so they became the state's problem.

In response, the Wyoming Oil and Gas Conservation Commission expanded its cleanup program. It has since plugged more than 2,300 wells. Crews have also repurposed more than 100 into new water wells.

Jill Morrison, executive director of the Powder River Basin Resource Council, an environmental group in Wyoming, says every state that has oil and gas is struggling with the cleanup task "because the industry has not been held accountable by the regulators and by the government to pay the cost of doing business."

"We're going to quickly be in the tens of millions of dollars responsible for plugging and reclaiming oil and gas wells if we don't require upfront bonding," she said.

That means making companies pay the full cost of plugging wells even before they start drilling.

Mark Watson, WOGCC supervisor, says he's less concerned about a similar situation happening again. He points to a law passed in 2016 that allows the state to examine an operator's financials prior to drilling.

"We're being more proactive with the companies," Watson said. "We keep a lot closer tab on these operators than we did before."

But the industry pushes back on the idea.

Lynn Granger, executive director of the American Petroleum Institute's Colorado chapter, says it isn't fair to operators who clean up after themselves.

"For the most part, our operators are very responsible," Granger says. "They are taking care of their wells and that is not left to the state."

Granger points out, for example, that in Colorado fewer than 1% of all oil and gas wells are abandoned.

A week of work

But the state remains concerned about these wells. Colorado has set a deadline of 2023 to get the highest-risk ones plugged.

That includes the well northeast of Denver.

Hickey's crew uses explosives to crack the rock around the well and then pours in concrete to seal it shut — nearly a week after starting the whole process.

"And then we cut it off 4 feet down, weld a cap on it, put identifying information on that cap, bury it, and sweep the floor," he says.

­Hickey says his crew is working as hard as it can to meet the state's 2023 deadline.

"We just got to get them cleaned up," he says. "They're not supposed to be this way. They're contrary to our rules, and it's our job to fix them."

But progress is slow. They have more than 250 of those high-risk wells to cap, and in the past year they've plugged only 10.

The crew hopes to move faster, but it's still unclear whether it will finish the job in time.