Accessibility links
Colombia Now Exports Medical Marijuana To Canada, U.K. The country wants to shake its image as an illicit narco nation. Now it's already home to more than two dozen legit cannabis companies, with exports to Canada and the U.K. 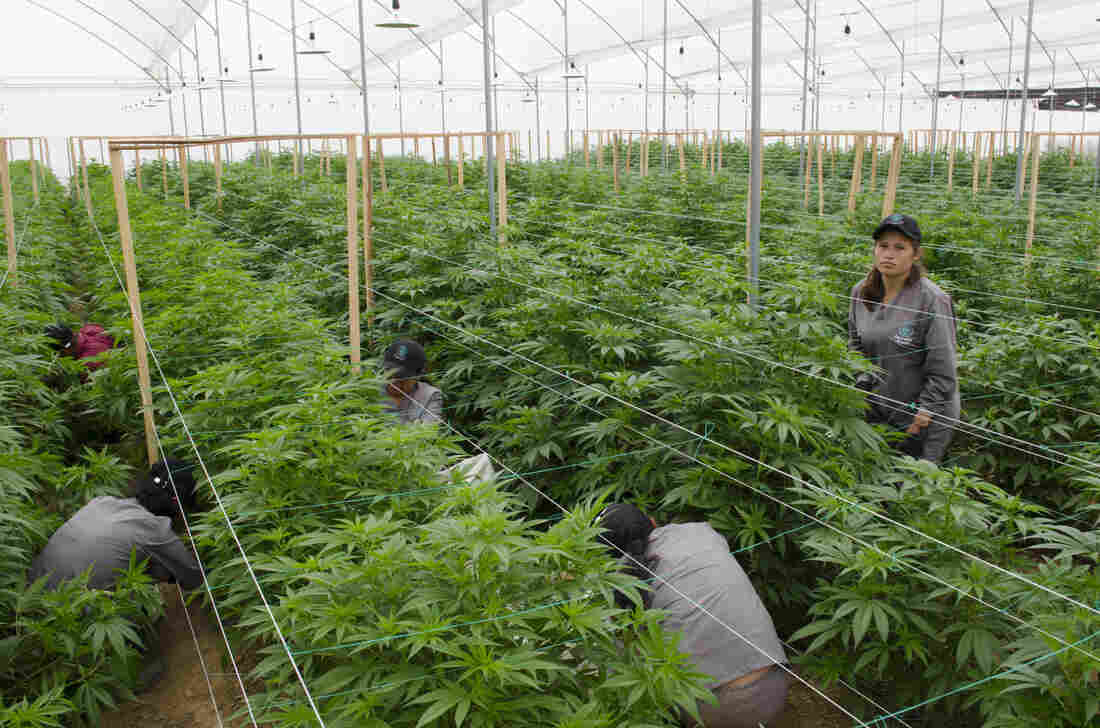 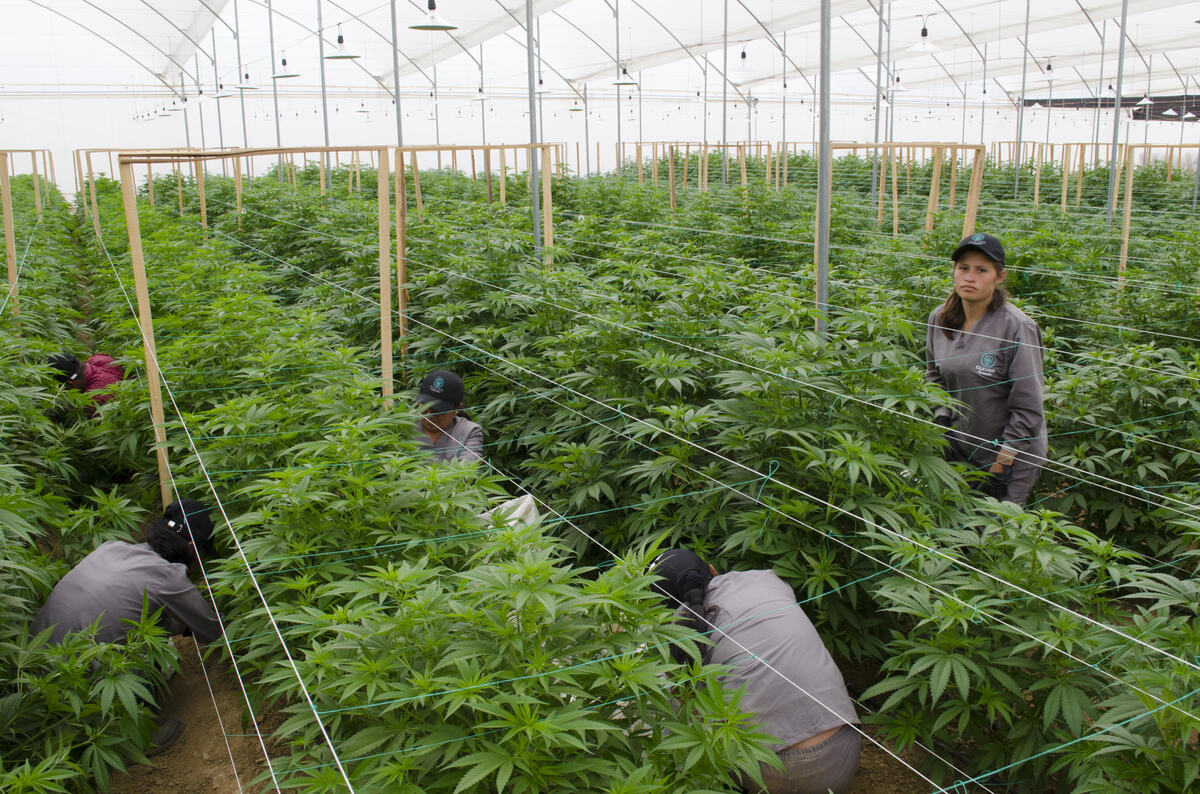 Patricia Santiago and her family were forced to flee their home near Colombia's Caribbean coast after complaining about neighborhood dope dealers who, in turn, threatened to kill them. But in an odd twist, Santiago now works in the drug trade — at a medical marijuana facility.

At first, Santiago felt like she was breaking the law as she pruned and clipped cannabis plants on a plantation run by a Colombian firm called Clever Leaves. However, the government legalized medical marijuana in 2016 and now Clever Leaves is exporting cannabis-based products to Canada and the United Kingdom.

Rather than a symbol of the country's dark past of narco-fueled violence, Santiago smiles and says, Colombian drugs "can now be used to treat people."

At least that's the bet of a growing number of entrepreneurs who are building vast marijuana plantations and state-of-the-art pharmaceutical laboratories that produce everything from cannabis-based pain relievers for cancer patients to dog treats that act as calming agents.

Other countries are passing laws to permit the production, import and export of medical marijuana but Colombia has a leg up because it did so three years ago, says Rodrigo Arcila, president of the Colombian Cannabis Industry Association. He said the group's 29 member companies have invested more than $600 million in building medical marijuana facilities.

Arcila maintains that Colombia can produce cannabis products at lower prices than competitors due to affordable land, relatively low wages and an abundance of skilled farm hands who cut their teeth in Colombia's booming flower business.

This is a marvelous opportunity in a country where drugs have caused so many problems.

Colombia sits near the equator, giving it 12 hours of daily sunlight year-round. By contrast, countries with seasonal variations require the extensive use of artificial lights, which drives up production costs.

"This is a marvelous opportunity in a country where drugs have caused so many problems," Arcila says.

Colombia is already well-known as a major marijuana supplier. In the 1960s and 1970s, tons of illegal Colombian cannabis, mostly grown in the Sierra Nevada mountains near the Caribbean coast, were smuggled into the United States.

But marijuana traffickers, including the late drug lord Pablo Escobar, soon switched to cocaine, which was far more profitable. That made Colombia ground zero for the war on drugs, a conflict that in the 1980s and '90s killed thousands of Colombians, police and army soldiers, anti-drug agents, judges and politicians.

In recent years Colombia — like Canada, several European and Latin American nations and many U.S. states — has taken a more permissive stance on pot. Since the mid-1990s, Colombian courts have upheld the right of individuals to possess up to 20 grams of marijuana, though a government decree last year banned people from using drugs in public. 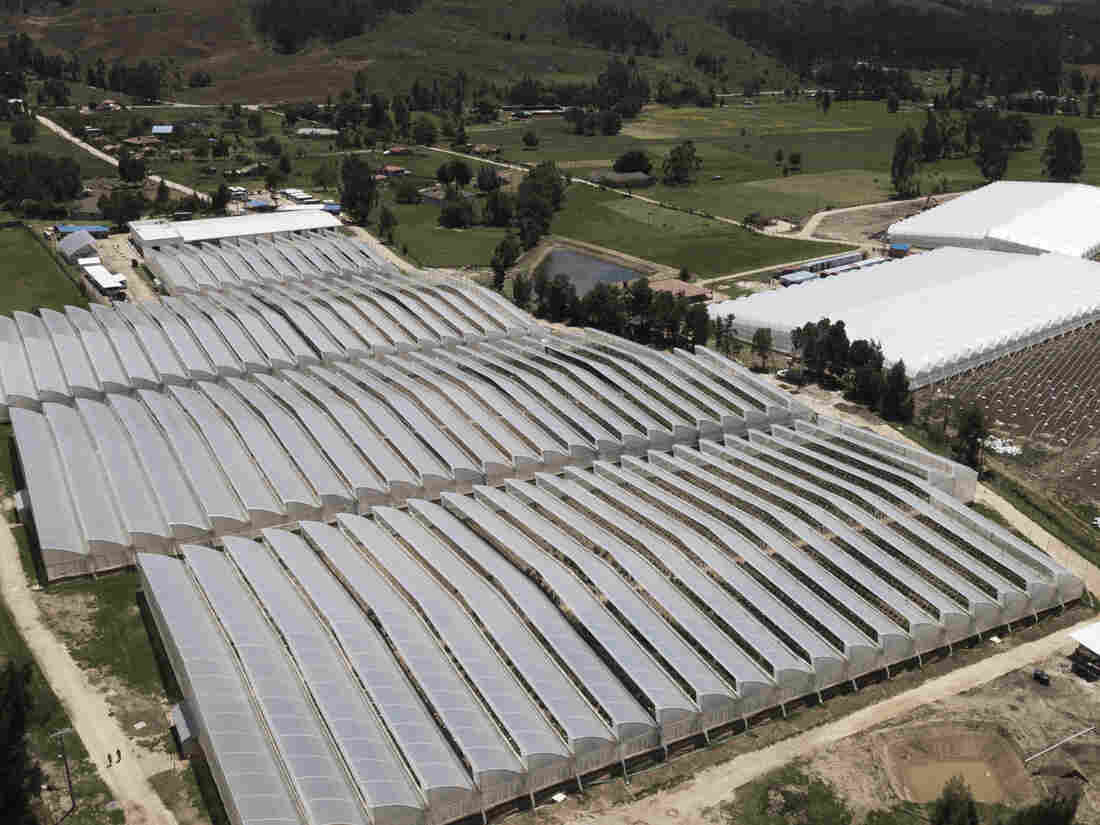 An aerial view of the Clever Leaves plantation in Pesca. It currently covers 37 acres and plans to expand cultivation to over 200 acres of marijuana plants by 2021. Courtesy of Clever Leaves hide caption 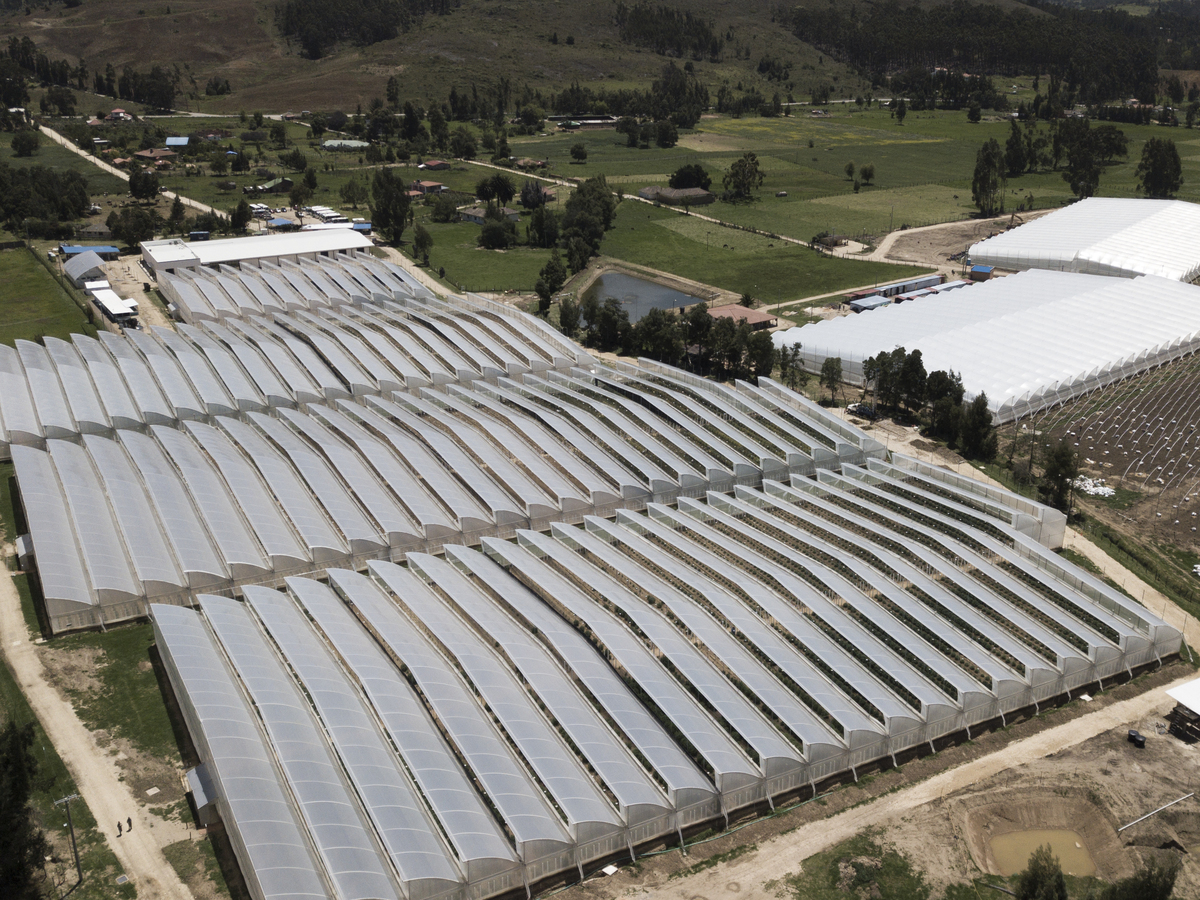 An aerial view of the Clever Leaves plantation in Pesca. It currently covers 37 acres and plans to expand cultivation to over 200 acres of marijuana plants by 2021.

As an emerging venture it's unclear how the medical marijuana business will play out. For example, it remains illegal to import marijuana-based products into the United States. Due to government bureaucracy in Colombia, it can take months or years for startups to secure the proper permits and licenses.

Yet the uncertainty hasn't stopped companies from betting big on cannabis. Khiron, a Canadian firm founded in 2017 and based in Colombia's capital of Bogotá, now has marijuana plantations in this country as well as Chile and Uruguay. CEO Álvaro Torres, a 40-year-old Colombian engineer, says one reason he got involved in the business was the occurrence of so many high-profile deaths, including the music star Prince, from opioid-based drugs.

"So I look at that and say: 'Why not cannabis which has less hazardous effects for the body?" Torres says. 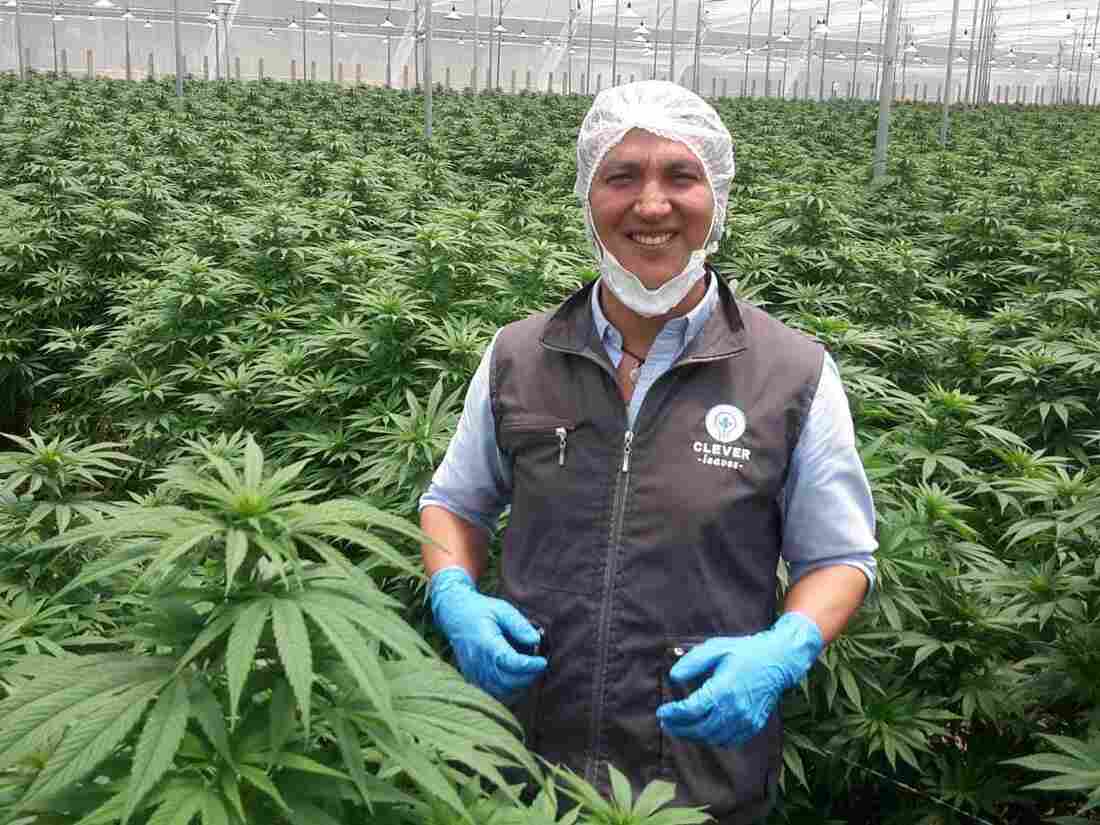 Julián Wilches is the co-founder of Clever Leaves. Before getting into medical marijuana, he used to work on drug policy at Colombia's Justice Ministry. John Otis for NPR hide caption 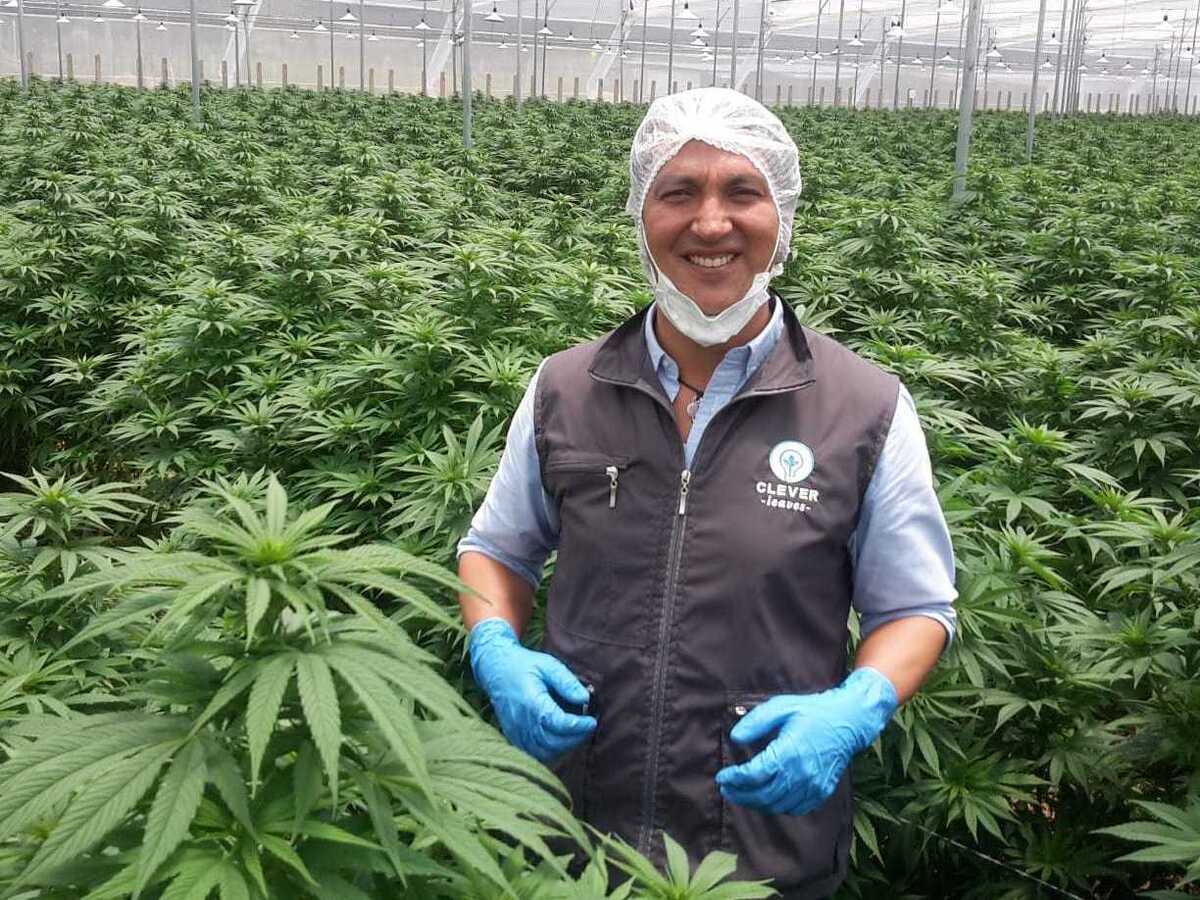 Julián Wilches is the co-founder of Clever Leaves. Before getting into medical marijuana, he used to work on drug policy at Colombia's Justice Ministry.

Julián Wilches, who co-founded Clever Leaves in 2016, used to work for the Colombian Justice Ministry combating the illegal narcotics industry. But he has fully embraced medical cannabis.

"I feel great about doing this," Wilches says during a tour of the Clever Leaves facility in the town of Pesca, a four-hour drive from Bogotá. "This is the right way to use controlled substances."

The land around Pesca has long been used for potato and dairy farming, but it's now home to 37 acres of marijuana bushes. Clever Leaves intends to increase the acreage to more than 200 by 2021, in its quest to become the world's largest medical marijuana company.

Inside green houses, Clever Leaves workers wearing smocks and rubber gloves water, prune and clip the cannabis plants which grow to a height of about five feet before they are harvested. The flowers, which are rich in chemical compounds called cannabinoids, are then dried and ground into a powder that is turned into oils, extracts and crystals at a Clever Leaves laboratory.

"Pharmaceuticals always come from the global north to South America to Africa to Asia," Wilches says "This is something that is changing that model. This is from Colombia to the world."