Accessibility links
'Talking To Strangers' Review: Malcolm Gladwell Explores Why It's So Hard The latest book by the author of Outliers and The Tipping Point looks at miscommunication throughout history — and finds it's really hard to know whom to believe.

In 'Talking To Strangers,' Malcolm Gladwell Explores Why It's So Hard To Do

In 'Talking To Strangers,' Malcolm Gladwell Explores Why It's So Hard To Do 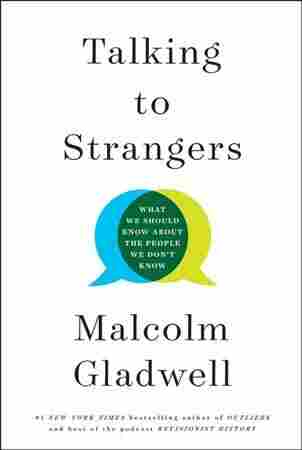 What We Should Know About the People We Don't Know

Malcolm Gladwell doesn't reference a famous line delivered by a prison chain-gang overseer to the character played by Paul Newman in the classic 1967 film Cool Hand Luke: "What we've got here is failure to communicate."

But it's one of the few communication breakdowns he overlooks in Talking to Strangers: What We Should Know About the People We Don't Know, a sweeping survey tour of miscommunication, through stories ripped from the headlines and history books. It's a fascinating, if sometimes meandering journey. Gladwell's premise in these tales is that humans "default to truth" — that is, we tend to take on face value the things people tell us, even if we should know better.

For instance, take Neville Chamberlain believing Hitler's promise that all the Fuhrer really wanted was the Sudetenland, the ethnic-German part of Czechoslovakia, and had no designs on Poland or the rest of Europe. Chamberlain believed this in part, Gladwell writes, because Hitler gave the British prime minister "the double handshake that he reserves for specially friendly demonstrations."

Chamberlain was one of the few European leaders to have actually sat down with Hitler prior to the outbreak of World War II, and he did so on three occasions. Chamberlain, says Gladwell, "was acting on the same assumption that we all follow in making sense of strangers. We believe that the information gathered from a personal interaction is uniquely valuable." As Gladwell concludes, "History has not been kind to Neville Chamberlain."

Gladwell begins and ends Talking to Strangers with a smaller-scale instance of miscommunication with tragic consequences. In July 2015, Sandra Bland, a young African American woman, was stopped by police near the campus of Prairie View A&M University in Texas, where she had just gotten a job.

The Texas Department of Public Safety trooper who pulled over Bland, Brian Encinia, described as "white, short dark hair, 30 years old," stopped her for allegedly changing lanes without signaling. The routine traffic stop escalated as Encinia told Bland to extinguish her cigarette. They exchanged increasingly hostile words, and Encinia eventually told her to get out of her car, threatening "I will light you up" if she failed to heed his order. Bland complied and was taken to jail. Three days later, she was found hanged in her cell.

Gladwell analyzes the policing policy that indirectly led to Bland's death, the result of an aggressive theory developed to stem crime in troubled big-city neighborhoods, in part by pulling over anyone suspected of even the most minor infractions as a premise to search their cars for weapons or drugs.

It was not an appropriate tactic for a quiet rural college neighborhood in the middle of the day, Gladwell argues, "stopping someone who should never have been stopped, drawing conclusions that should never have been drawn." Gladwell writes that the death of Bland "is what happens when a society does not know how to talk to strangers."

Gladwell is an old hand when it comes to talking and writing about strangers and others. His previous books, including The Tipping Point and Blink, have been huge bestsellers. His podcast, Revisionist History, rates among the top 10 downloads. Gladwell is an engaging storyteller, and in Talking to Strangers, he tells lots of stories. We delve into the Jerry Sandusky pedophilia scandal at Penn State University, the trial of Amanda Knox in Italy, even Sylvia Plath's suicide. The villains are many, ranging from Hernán Cortés, the Spanish conquistador, whose inability to communicate with Aztec ruler Montezuma II led to Montezuma's death and the eventual end of the Aztec empire; to Fidel Castro, who planted a Cuban mole into the U.S. Defense Intelligence Agency, which the agency, despite troubling warning signs, failed to detect for over a decade; to Bernie Madoff, who conned his way to the top of a massive Ponzi scheme involving some of the biggest institutions on Wall Street.

As with the Cuban mole at the DIA, there was no shortage of warning signs that something was off about Madoff's claims of success in investing his clients' money. Some in the Securities and Exchange Commission, which oversees the hedge fund industry, were suspicious. Madoff claimed an investment strategy linked to the stock market, Gladwell writes, "which meant like any other market-based strategy his returns ought to go up and down as the market went up and down. But Madoff's returns were rock steady — which defied all logic."

The SEC investigator reported to his supervisor, who also had doubts but, Gladwell writes, "not enough doubts." They defaulted to truth, as Gladwell says, and the fraud continued.

But whittling some situations down to "failure to communicate" may be too much simplification in some cases. Gladwell devotes a chapter to the 2015 sexual assault of Chanel Miller, who just last week revealed her identity, by Stanford University swimmer Brock Turner. Both had been drinking heavily at a Stanford frat house party before the assault. Gladwell asserts that "so long as we refuse to acknowledge what alcohol does to the interaction between strangers, that evening ... will be repeated again. And again." But here, Gladwell's theory is a tough sell. Miller was unconscious, and her assault was much more than simple miscommunication. Turner was found guilty of three felonies and sentenced to six months in jail (he was released after serving three).

And reaching back to the Sandra Bland case, can we really disregard racism? Does it really just come down to two strangers who don't know how to communicate with each other?

Gladwell's journey through the annals of miscommunication isn't without a few more minor rocky detours too. He bogged down this reader with a detailed dissection of an episode of the 1990s sitcom Friends to make a point about how we rely on people's facial expressions when it comes to reading their inner feelings and intentions. Whatever one thinks of Rachel, Chandler and the gang, I'm not sure to what extent their actions and reactions on set should be used as a guide to actual human behavior.

And what's the lesson here? How do we change our credulous behavior, or should we? How can we read people and trust strangers to act right by us? Making sense of the stranger, Gladwell writes, "requires humility and thoughtfulness and a willingness to look beyond the stranger, and take time and place and context into account."

It may be good advice generally — Gladwell mostly shows us — and it is all too often ignored throughout history. But some situations are just more complicated than that.