Accessibility links
Is It Right That Debates, Not Voters, Have Led To Candidates Dropping Out? The field of Democratic presidential hopefuls has begun to shrink in advance of, and because of, this week's debate. The new, more rigorous rules instituted by the party are causing some controversy.

The current tally of 20 Democratic presidential hopefuls is enough to set a record in any previous primary season. But even with the giant number of candidates, the reality is that the winnowing has already begun.

The field is shrinking — slowly — but what's different this time compared to past campaigns is what's driving candidates to pack it in.

Here's what it's not — voters.

It's now the debates, he argues.

This next debate, which has essentially halved the field — at least for one night — "is really the first contest," Anderson said.

The Iowa caucuses on Feb. 3 will still be the first time actual voters will weigh in, followed by the New Hampshire primary on Feb. 11. Those will inevitably shrink the field drastically, as usual. But the weeding out isn't waiting until then because of the new, tightened criteria for the Democratic presidential debates, instituted by the national party.

If you do not make that DNC debate stage you are not a part of the national conversation anymore."

The more rigorous standards — 2% in at least four polls and 130,000 unique donors across 20 states and at least 400 in each state — have forced multiple 2020 Democratic candidates to face the music. Five candidates, who would not clear that pair of hurdles to be eligible to join those big debates on cable television, have dropped out.

Debates are a place to boost a campaign with a big moment in front of a big TV audience. But this time, they are also practically functioning as gatekeepers in the process.

It's simple really, Anderson said: "If you do not make that DNC debate stage you are not a part of the national conversation anymore."

And if you're not part of the national conversation, the downward spiral takes hold. You can't rise in the polls, which makes it even harder to raise money, which means your campaign has no oxygen. 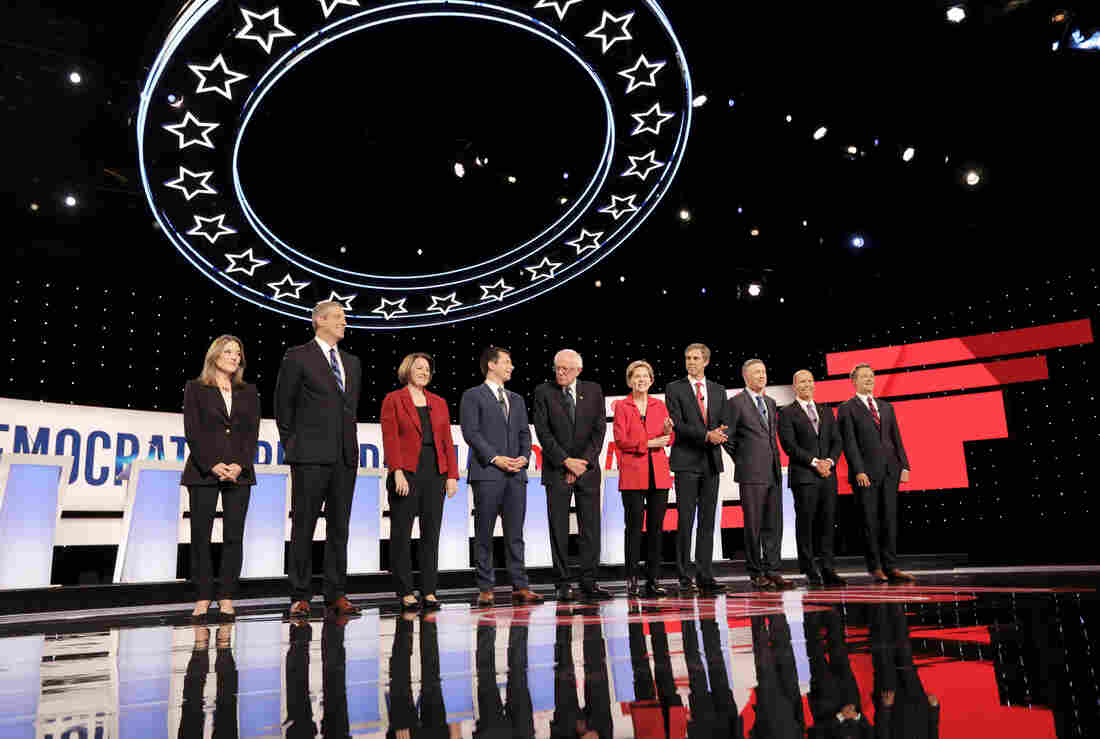 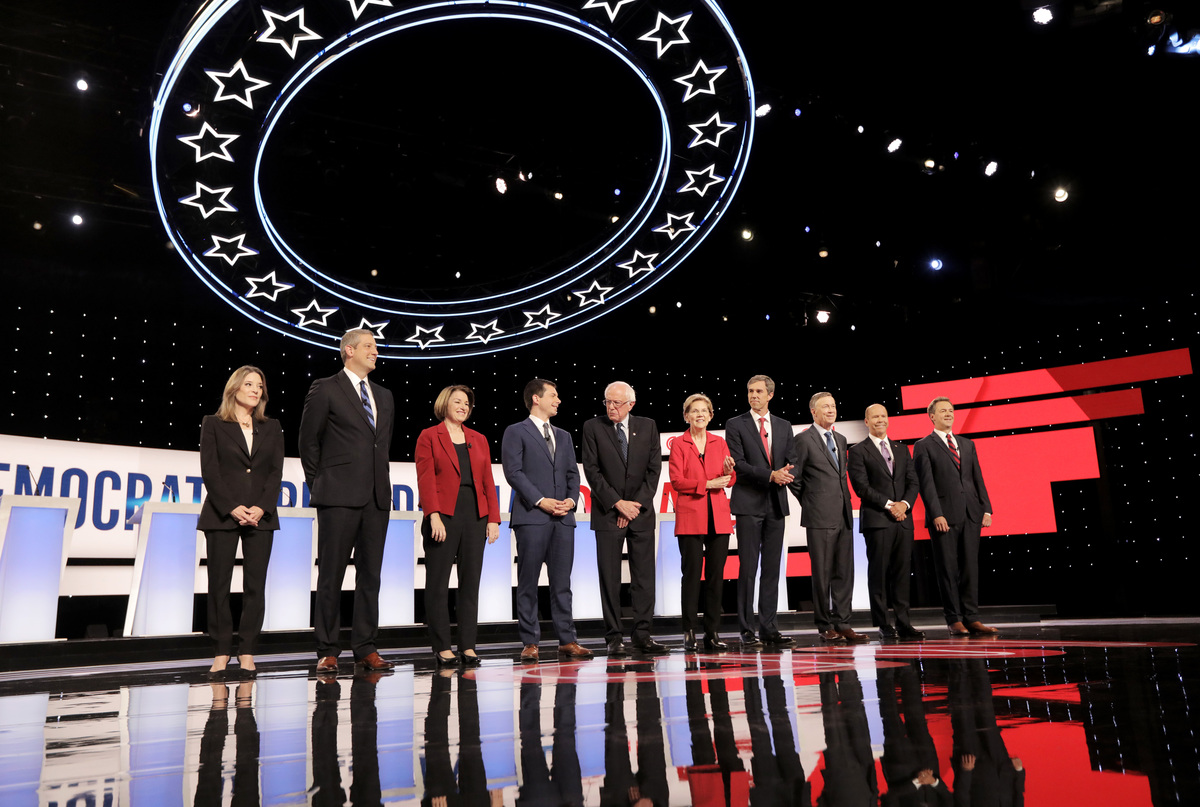 That's not fair, say the the candidates left off the stage. Sen. Michael Bennet of Colorado went so far as to say the Democratic National Committee is, in fact, "stifling debate." And he said that on the dais right in front of DNC Chairman Tom Perez.

The DNC's process is stifling debate at a time when we need it most. And it will NOT help us beat Donald Trump.

If we wanted to be the party that excluded people, we'd be Republicans. pic.twitter.com/EqsHvnoQ5h

Former Montana Gov. Steve Bullock has been outspoken about the rules, too. He said they have turned the primary into "The Hunger Games"; contended that they are hurting governors, like himself and Gov. Jay Inslee of Washington state, who dropped out; and benefiting people with money like Tom Steyer, a billionaire venture capitalist.

Steyer did not qualify for the September debate, but he is close to qualifying for the October one. He spent $12 million on ads, which helped raise his name identification and gather the 130,000 donors needed. He just needs one more poll to show him at 2% to qualify for the next debate.

"We're kidding ourselves if we're calling a $10 million purchase of 130,000 donors a demonstration of grassroots support," Bullock said in a statement. "It's not serving the candidates, and it sure isn't helping the voters who will actually decide this election."

In response, DNC War Room Director Adrienne Watson noted, "The debate rules have been public for months, and candidates have been given more opportunities and more time to qualify for debates than in previous cycles." 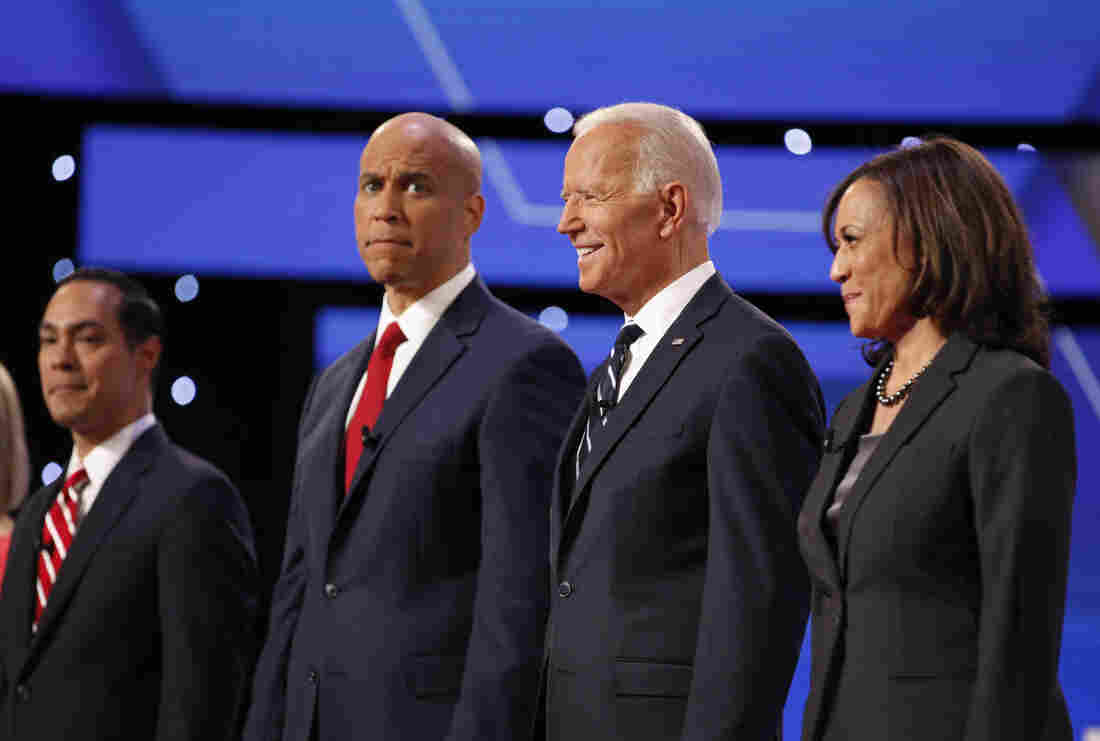 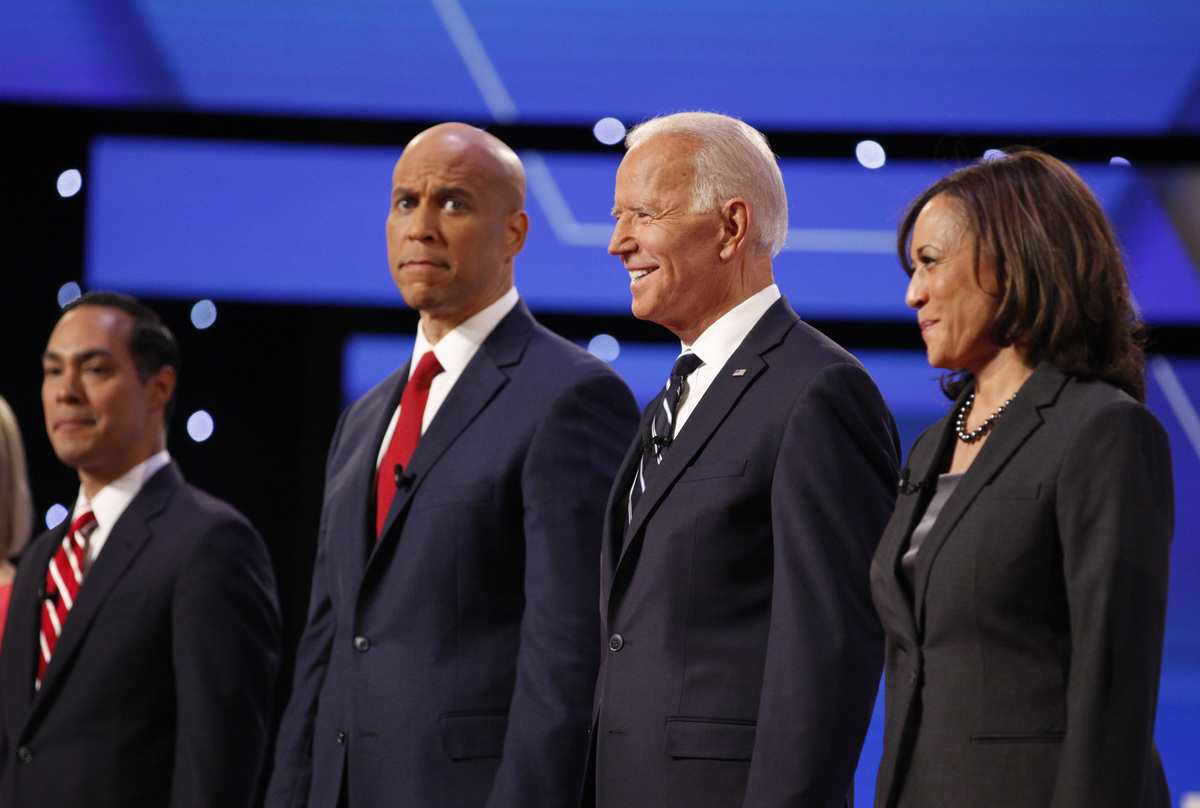 "It's controversial, and everybody complains, because the stakes are so high when they're not doing well," Dean said. But he added, "I think this is a reasonable way to figure out how you can bring some sort of order."

Otherwise, he argues, you'd have two dozen candidates heading into the Iowa caucuses, which would make even the logistics of the event difficult.

For the first two rounds of debates, the qualification thresholds were half as rigorous, so the stage was jam-packed with 10 candidates per night over two separate nights.

That made for 20 total candidates, a cornucopia of candidates. For some voters, though, it was an overabundance. For months, Democratic voters at campaign events have said they are undecided and think there are too many candidates.

"It's a lot of work," Jake Poorman of Iowa told the AP of his effort to get each of the candidates to sign a commemorative baseball. He's gotten 16 to sign so far, and already had to get another ball because they didn't all fit. "There's starting to be a bit of fatigue."

Other Democrats worry that the infighting will help President Trump's chances of being reelected.

So this week's debate has served the purpose of slicing down the field of candidates with only 10 making the cut. Of those not in, five saw the writing on the wall and dropped out ahead of the deadline to qualify.

The dropouts so far are Inslee, as well as Sen. Kirsten Gillibrand of New York, former Gov. John Hickenlooper of Colorado, Rep. Seth Moulton of Massachusetts, and Rep. Eric Swalwell of California.

Today, I am ending my campaign for president.

I am so proud of this team and all we've accomplished. But I think it’s important to know how you can best serve.

To our supporters: Thank you, from the bottom of my heart. Now, let's go beat Donald Trump and win back the Senate. pic.twitter.com/xM5NGfgFGT

Most now go back to their old jobs.

Hickenlooper, though, is challenging Colorado Sen. Cory Gardner, who's among the most vulnerable GOP incumbents in 2020. Here's his first video in the race:

In search of a viral moment

The increased influence of the debates has meant the candidates need to essentially run two campaigns at once.

They need to show up in living rooms, in union halls and at parades and Labor Day picnics in the early voting states — Iowa, New Hampshire, Nevada and South Carolina.

But they also need to establish a national presence in order to compete for donors, and to demonstrate support in the polls that help them qualify for the debates.

If done right, one strategy can help the other. Have a big moment on cable TV, for example, like the one South Bend, Ind., Mayor Pete Buttigieg did in a CNN town hall when he challenged Vice President Pence's version of Christianity.

The audience in the theater roared its approval. But more importantly for Buttigieg, the moment went viral on social media. As he result, an early visit to Des Moines, Iowa, that was expected to draw maybe 50 to 100 people drew more than 1,500.

Prior to that, Buttigieg was little known. Since then, he's been in the top five of the Democratic field, though he's faded from his boom after that town hall because of a controversy back in his hometown over race and policing.

That happened for Sen. Kamala Harris, D-Calif., after a breakout moment in the very first debate. She directly took on front-runner Joe Biden on his past opposition to busing to integrate public schools. Harris got a bump in the polls and in fundraising, but she, too, has had a hard time sustaining both in the months since.

"It's going to be a little loud right now"

This year's Democratic race highlights a generational divide within the party. It's evident on the debate stage among candidates that range in age from 37 (Buttigieg) to 78 (Sanders), and it's also clear with voters at rallies.

They are visual reminders of how the Democratic Party has greater diversity across age and racial lines than the GOP. But it also can make for some disagreements, if not on direction, but on policy boldness and tactics, including whether the party should tip the scales to shrink the number of candidates.

"I think we've got to deal with the fact that it's going to be a little loud right now," said Jessica Byrd, 32, a Democratic campaign strategist who runs the firm Three Point Strategies.

She's one of those younger voices emerging as a force in the party. She argues the DNC should not be taking steps to shrink the size of the presidential field before voters get their say.

Byrd, who started volunteering on campaigns when she was a 16-year-old growing up in Ohio, said she thinks a larger field is a good thing. She believes it would pay off in the long run to hear ideas from more people, because it will energize voters come November 2020 — and they'll feel like they got a fair shot.

"What it's allowing us to do is to build hundreds of thousands of new voices into the process by giving them a person to cheer for," she said.

And if that means a crowded debate stage or ballot, in her view, so be it. The flip side to that is the risk the party doesn't fully unify around — and be excited to vote for — whoever becomes the eventual nominee.

Either way, because of the debates, in large measure, by the time the first votes are cast, the field will be smaller than it is now.

And, for as much that has changed the Democratic primary contest, Dean notes, "I think still think that Iowa, New Hampshire, South Carolina and Nevada are going to be key places."