Typhoon Faxai Rips Through Tokyo Area: At Least 2 Dead And 700,000 Without Power

Typhoon Faxai Rips Through Tokyo Area: At Least 2 Dead And 700,000 Without Power

The death toll could rise as officials survey the damage. The Kyodo News Agency is reporting a third storm-related death, but it adds that the circumstances are still being investigated.

The Tokyo Electric Power Co. says more than 850,000 customers were initially left without power by the storm. By Monday night local time, that number had dropped to about 700,000.

More than 100,000 people had been urged to evacuate from low-lying and other vulnerable areas, as the Japan Meteorological Agency warned of a possible record storm.

People in eastern Japan woke up Monday morning to survey the damage caused by Typhoon Faxai. It made landfall overnight near Tokyo, leaving dozens injured and hundreds of thousands of homes without power. pic.twitter.com/Z52dySxRmf

Commuters who got up Monday morning hoping to make their way to work were faced with flooded streets and rows of utility poles that had been thrown down. Those who made it to train stations faced cancellations or long delays, as crews worked to restore service. One station's roof was blown onto its tracks.

Some of the worst damage came in the coastal Chiba prefecture, east of the capital across Tokyo Bay. On Sunday night, Faxai began plowing its way up the bay, bringing dangerous winds inland as it passed just west of Chiba City and making landfall early Monday. It then turned to the northeast and made its way back over the Pacific Ocean.

"The typhoon brought record-breaking winds to Chiba City, where winds gusted to over 200 kilometers per hour [124 mph]," Japan's NHK News reports. "Two people died in accidents apparently caused by the strong gusts — one in Tokyo and one in Kanagawa." 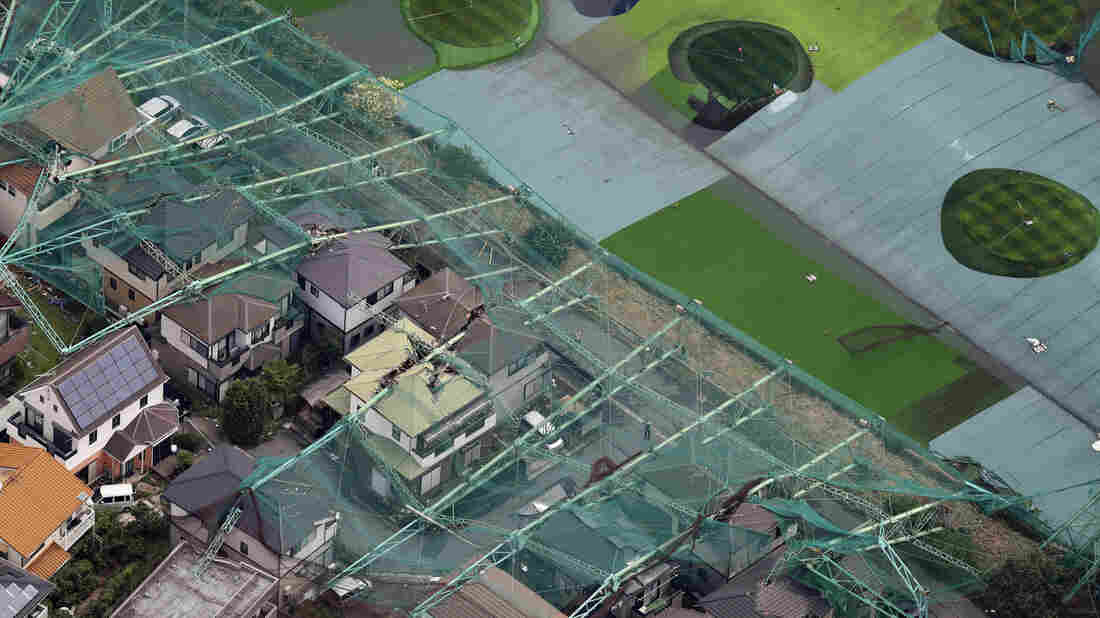 Houses damaged by the collapse of the perimeter netting of a golf training field because of strong winds from Typhoon Faxai are seen in Ichihara, east of Tokyo, on Monday. Kyodo/Reuters hide caption 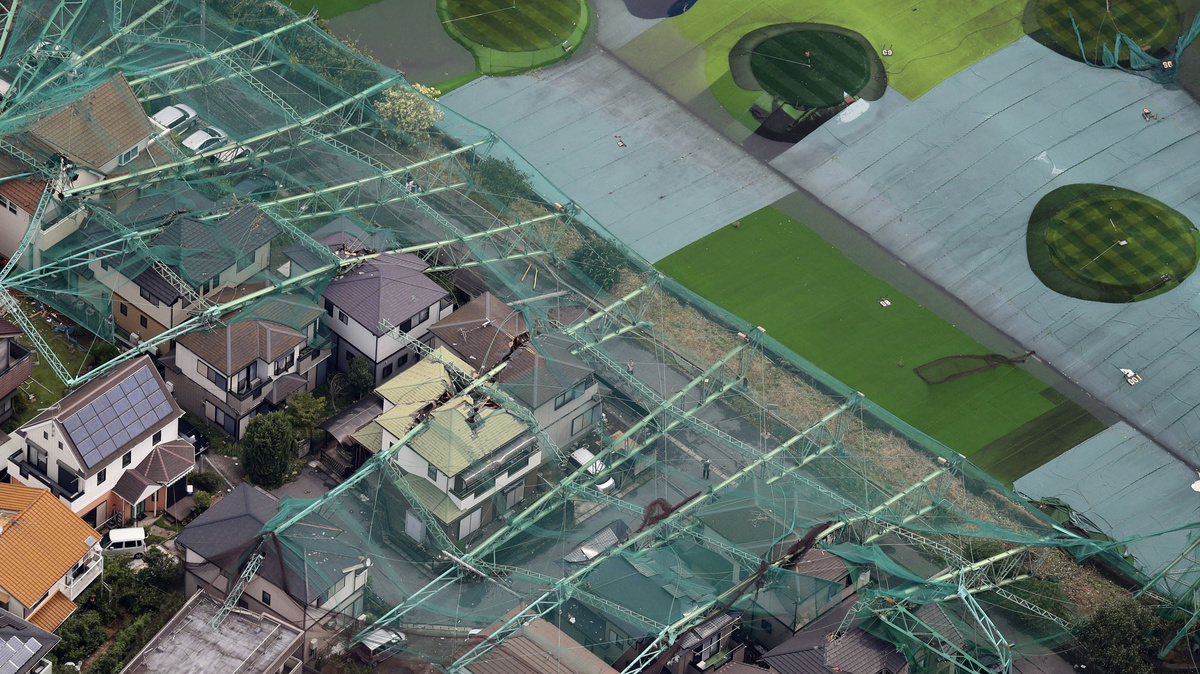 Houses damaged by the collapse of the perimeter netting of a golf training field because of strong winds from Typhoon Faxai are seen in Ichihara, east of Tokyo, on Monday.

Faxai is also being linked to a fire at Japan's largest floating solar power plant, which sits on the waters of the Yamakura Dam in Chiba prefecture. The 13.7-megawatt plant covers 44 acres, but dozens of its panels erupted in flames on Monday. According to NHK, fire officials say the typhoon's intense winds might have pushed the panels on top of one another, causing them to overheat when the sun hit the solar plant.

As images from the city of Ichihara in Chiba prefecture show, the typhoon also knocked down green safety netting at a golf driving range, sending an entire side of the assembly — support poles and all — crashing onto neighboring homes. The posts crushed the rooftops of houses as the large structure fell; in one case, a single pole was left sticking out of a roof.

Faxai struck just days after a separate typhoon struck the Korean Peninsula. Typhoon Lingling caused at least five deaths in North Korea, according to the country's state news agency. At least three people in South Korea died as a result of the storm, according to The Korea Herald.

Lingling damaged more than 9,400 buildings, South Korea's Yonhap News Agency says, noting that the storm brought the fifth-strongest winds of any typhoon that has ever been recorded hitting the peninsula.

Emergency crews working to restore power and help those whose homes were damaged in southern South Korea are still facing difficult conditions, as heavy rains were forecast for both Monday and Tuesday.