Accessibility links
'The Testaments' Review: Margaret Atwood Hints At Hope In 'Handmaid' Sequel Margaret Atwood's The Testaments opens about 15 years after the end of The Handmaid's Tale. Critic Maureen Corrigan says the follow-up gives her what she wants most: the promise of an end to Gilead. 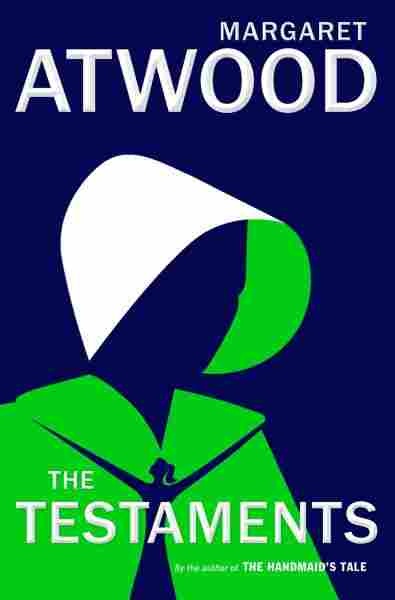 The Sequel to the Handmaid's Tale

Now that it feels like we're living in a society that I find myself thinking of as "Gilead lite," how could The Testaments, Margaret Atwood's highly anticipated sequel to The Handmaid's Tale, possibly convey the same degree of shock as its predecessor? The answer is, it can't.

When The Handmaid's Tale was published in 1985, American women's reproductive rights seemed relatively secure and global climate change was relegated to disaster movies. But the barren and repressive fundamentalist regime of the Republic of Gilead (formerly most of the United States) that Atwood summoned up so vividly in The Handmaid's Tale has turned out to be not so outlandish after all; hence, the popularity of the current Hulu series starring Elisabeth Moss as the handmaid, Offred. While The Handmaid's Tale may not be an exact reflection of "how we live now," it no longer feels as reassuringly improbable as it once did.

In The Testaments, Atwood explicitly wears the mantle that The Handmaid's Tale conferred upon her: that is, literary social critic and seer extraordinaire. A curious difference between the two novels, however, is that, rather than taking readers on another descent into nightmare, Atwood here foresees the possibility of hope: hope that the forces of resistance and sisterhood will eventually triumph over misogyny, power-mongering and the despoiling of the planet. It may take a century or two, Atwood cautions, to reach the light at the end of the Gilead tunnel, but reach it we will.

The Testaments opens about 15 years after the end of The Handmaid's Tale, when, as readers will remember, our narrator Offred was about to escape Gilead into either a deadly trap or the freedom of Canada. In interviews, Atwood has confessed that the challenge of re-creating Offred's voice — so hollow and hypnotic — was a creative stumbling block to writing a sequel to The Handmaid's Tale.

Hear Margaret Atwood Read From 'The Testaments,' Her Sequel To 'The Handmaid's Tale'

She solves that problem in The Testaments by dividing the narration among three distinct characters: Agnes, who grows up in Gilead as the daughter of an important Commander; Daisy, a passionately anti-Gilead activist teenager who lives in Canada, and Aunt Lydia, whom Atwood's readers will remember, un-fondly, from The Handmaid's Tale.

Aunt Lydia is a gender norm enforcer: one of the class of "Aunts" akin to high-ranking prison matrons, who preside over births, executions and the training of handmaids. But, early in The Testaments we discover that beneath her righteous "Go, Go Gilead!" demeanor and what Atwood calls her smug "wrinkly old-turnip smile," Aunt Lydia is a seething Fury.

In her retrospective narration, we hear about the brutal process by which Aunt Lydia — who in her former life served as a judge — was molded into an "Aunt." For decades now, she's been out for vengeance, amassing and scribbling down the secret sins of Gilead: She knows that, as another character says, "beneath its outer show of virtue and purity, Gilead was rotting."

Atwood has always been a deft suspense writer — novels like Alias Grace, The Blind Assassin and even Cat's Eye attest to her talent for quickening readers' heart rates. The Testaments is all about suspense: It's plot driven, whereas The Handmaid's Tale was a novel of vision, voice and mood. That mood — oppressive and claustrophobic — was a product of Offred's enforced stillness: She spent most of her time with her eyes cast down, indoors, in small rooms, waiting to be summoned for the monthly ritualized sex "ceremony" with the Commander.

Here, our characters are on the move: Their paths and stories ingeniously intersect — as in a Victorian novel — and, at the end, there's even a thrilling, cinematic chase scene. What The Testaments lacks in eeriness, it gains in entertainment. Atwood herself seems lighter, even a little frivolous here: For instance, she bestows goofy names on some of the Aunts (like Aunt Estée and Aunt Sarahlee) and has them sit down for tea in the Schlafly Café. Dare I say, The Testaments is more "fun" to read than its predecessor.

It's a tribute to the greatness of The Handmaid's Tale that I and so many other readers, particularly female readers, have been willing and eager to re-enter Atwood's sinister dystopian republic of Birthmobiles and Prayvaganzas. If I sound mildly disappointed in The Testaments, it's paradoxically because the novel so kindly (and perhaps a little too easily) gives me what I most want: that is, the promise of an end to Gilead.