Accessibility links
At Camp David, Trump Sought Mantle Of History; Afghanistan Is Different For a generation, "Camp David" was synonymous with peace between Israel and Egypt, but the world — and the long war in Afghanistan — has come a long way from those days.

At Camp David, Trump Sought The Mantle Of History. But Afghanistan Is Different

At Camp David, Trump Sought The Mantle Of History. But Afghanistan Is Different 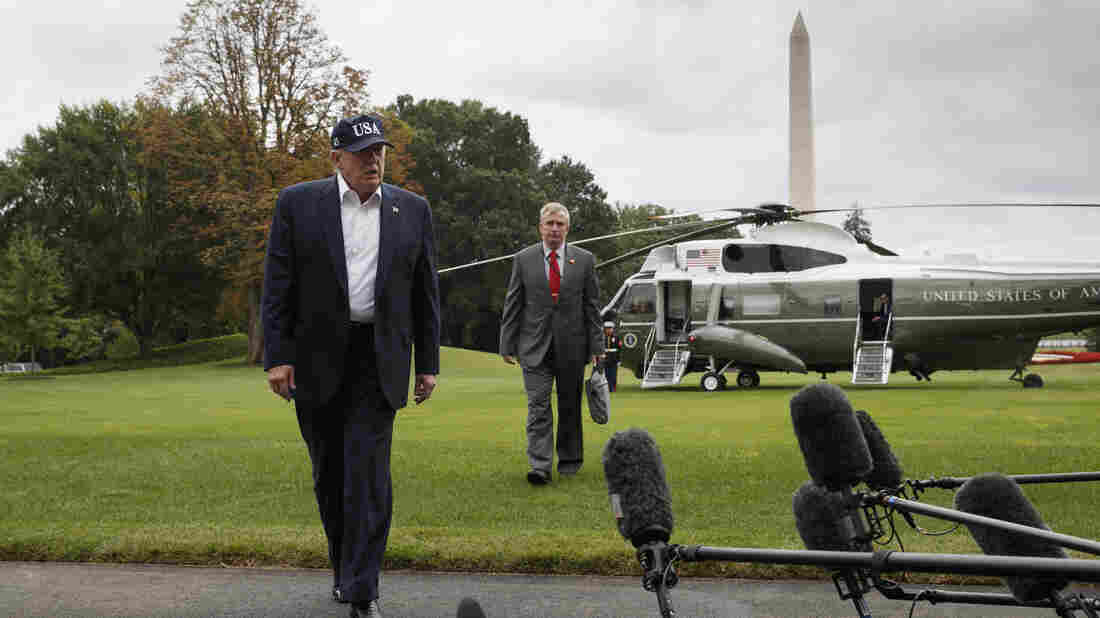 President Trump walks with Coast Guard Rear Adm. Peter Brown to speak to the media on return to the White House from Camp David on Sept. 1. Jacquelyn Martin/AP hide caption 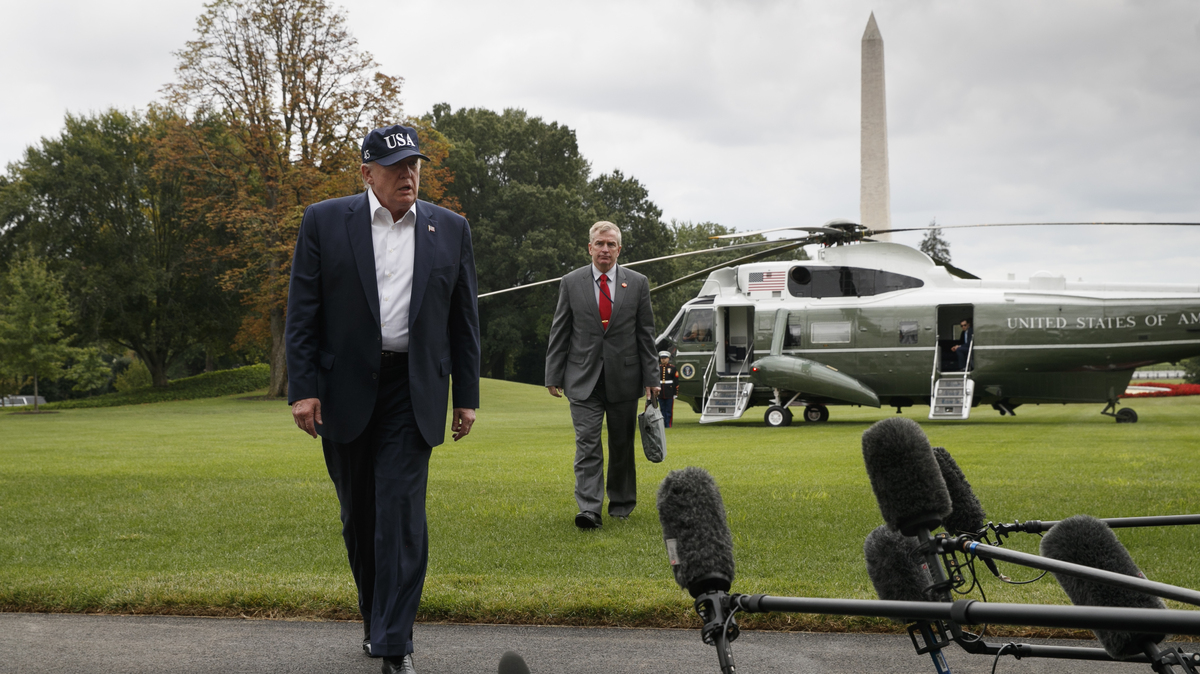 President Trump walks with Coast Guard Rear Adm. Peter Brown to speak to the media on return to the White House from Camp David on Sept. 1.

Questions will linger about President Trump's aborted plan to host peace talks between Afghanistan's elected leader and representatives of the Taliban, but one aspect of that ill-starred rendezvous is relatively easy to understand — the proposed location at Camp David.

The venue, a federal facility in the Catoctin Mountains of Maryland about 70 miles northwest of Washington, D.C., has been associated in the past with U.S. presidents and momentous meetings.

The peace agreement known as the Camp David Accords was negotiated there by President Jimmy Carter and the presidents of Israel and Egypt in September of 1978 and signed six months later at the White House.

Even today, speaking of those accords or mentioning a "Camp David-style" negotiation has the power to summon hope. The place and the phrase have become an emblem of serious commitment to diplomacy, cooperation and peace. And they carry the cachet of success.

That's why Trump said he made the decision on his own — reportedly over the objections of his advisers — to try again at Camp David for an accord with and between Afghanistan's government and the insurgent Taliban.

The situation in Afghanistan, however, is quite different from that in the Middle East in the late 1970s. And Donald Trump is a different president from Jimmy Carter. 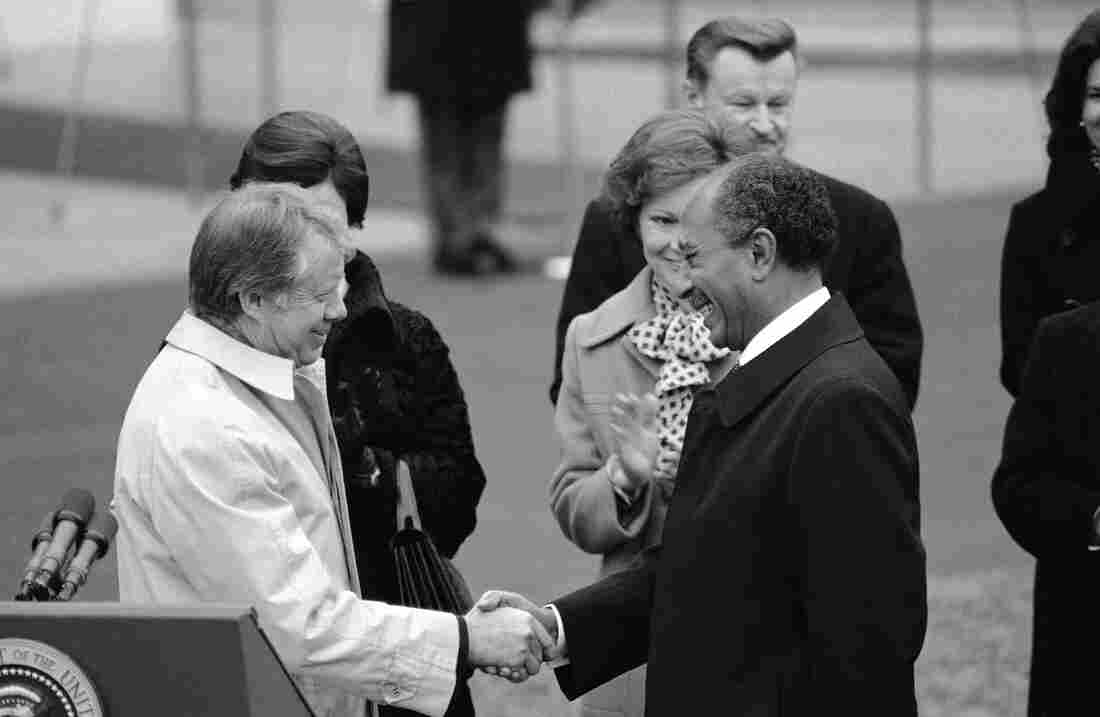 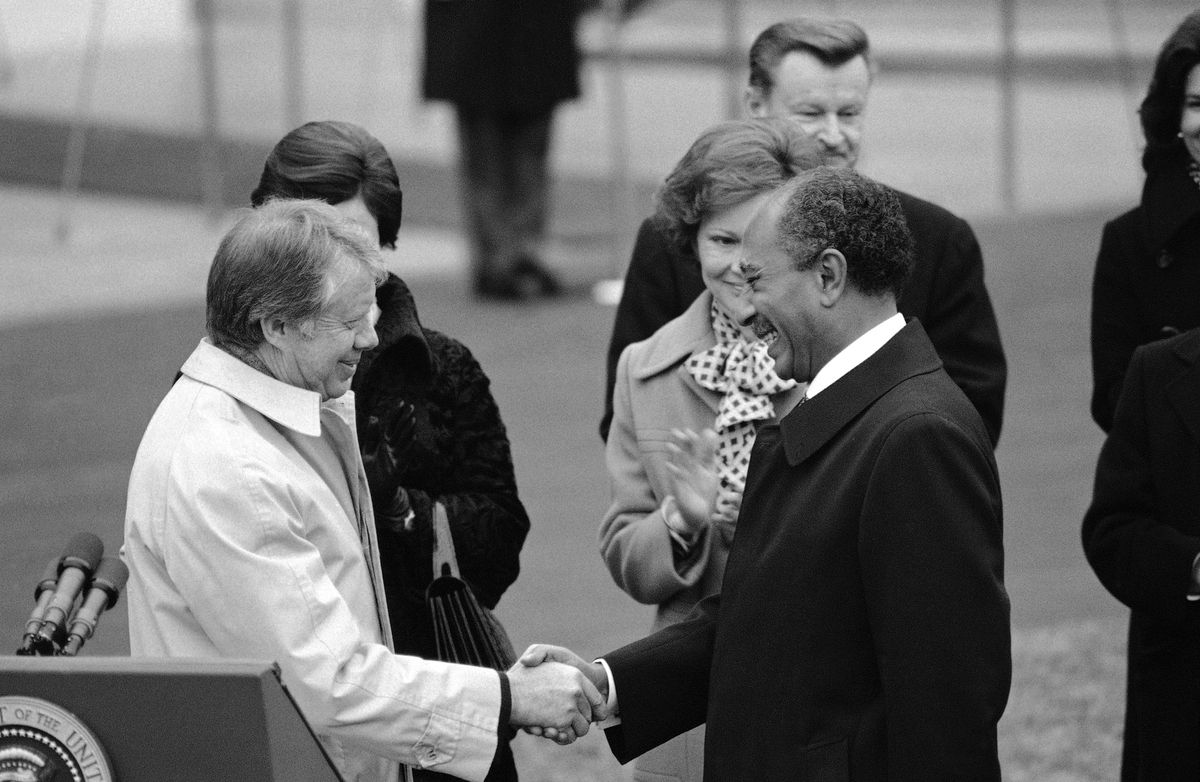 President Jimmy Carter and Egyptian President Anwar Sadat shake hands following Sadat's arrival on the South Lawn of the White House in Washington on Feb. 3, 1978. The two leaders met for talks at Camp David, Md., in the western Maryland Mountains.

Camp David began as a 125-acre public works project in the 1930s, intended as a resort for government workers. President Franklin Roosevelt made it a retreat for himself and President Dwight Eisenhower adopted it, adding the current name in honor of his first grandson.

Presidents since have used Camp David in various ways, but Carter gambled the most on making the isolation and intense focus of the "camp" atmosphere pay off.

The political future of three national leaders — Carter, Egyptian President Anwar Sadat and Israeli Prime Minister Menachem Begin — hung in the balance at their summit. All emerged as winners. Begin and Sadat shared the 1978 Nobel Peace Prize and Carter enjoyed what may have been the best few weeks of his presidency.

Perhaps as important, each laid claim to the title of peacemaker as a part of his legacy in office.

The glory, of course, would be fleeting. Carter was beaten badly in his bid for reelection in 1980. Sadat was assassinated by hard-liners in the Egyptian army the following year, and Begin resigned as prime minister in 1983 after attempts to defeat the Palestine Liberation Organization in Lebanon resulted in heavy casualties among civilians.

But there was general agreement that the isolation and allure of Camp David contributed mightily to the success of the 1978 negotiations. And there was far more at work than environment alone.

For starters, the ordeal lasted 13 days without a break, with the participants meeting and then retiring to their respective cabins for consultations and strategizing.

Carter's patience in pursuit of a project was legendary, and he made it a personal challenge to keep both Sadat and Begin in camp and talking. This entailed endless rewrites and tinkerings and tested the engineer in Carter, who always believed a solution could be found.

So gaudy was the media splash back in 1978 that it could not have escaped the young Donald Trump, then a businessman in his early 30s. Nor would the current president fail to have noted the Camp David connection to the Nobel Peace Prize, an honor of which he has spoken numerous times.

Even though the negotiations toward ending the 18-year Afghan war have taken place in various locales far from the U.S. over the past 10 months, President Trump apparently took an interest in having the climactic moments of final deal-making take place on his turf – albeit a turf he visits far less often than his own properties.

Moving the endgame negotiations to Camp David seems to have been acceptable to Afghan President Ashraf Ghani, although it has not been clear the idea was accepted by the Taliban.

But as the actual weekend for the meeting approached, the president seemed to shift course. He sent a tweet Saturday night disclosing the previously secret meeting — and saying he had called it off.

The Key Role Pakistan Is Playing In U.S.-Taliban Talks

Asked about this Monday, Trump said he had "taken my own advice" about it. The president also said talks with the Taliban are "dead."

We may never know how close Trump actually came to bringing the belligerents to Camp David, or anywhere else, for a Carter-like tour de force of diplomacy and deal-making.

Certainly, the challenge of an Afghan peace deal is thorny and fraught with political costs, reminiscent of the challenges Carter faced.

Still, Trump has scarcely been regarded as a Carter admirer in the past, and his approach to issues and personal style offer stark contrast. Moreover, the Afghanistan negotiations involve a party — the Taliban — with which the United States is in direct hostilities.

American forces have killed tens of thousands of Taliban fighters over nearly 18 years — and the Taliban are responsible for thousands of American deaths. Where Carter sought to be an outside broker, Trump, as commander in chief, must both be a broker among the Afghan parties and his own enemy.

The political and diplomatic difficulty of that reality was underscored by the reason Trump gave for calling off the Camp David meeting: a Taliban attack that killed an American service member. 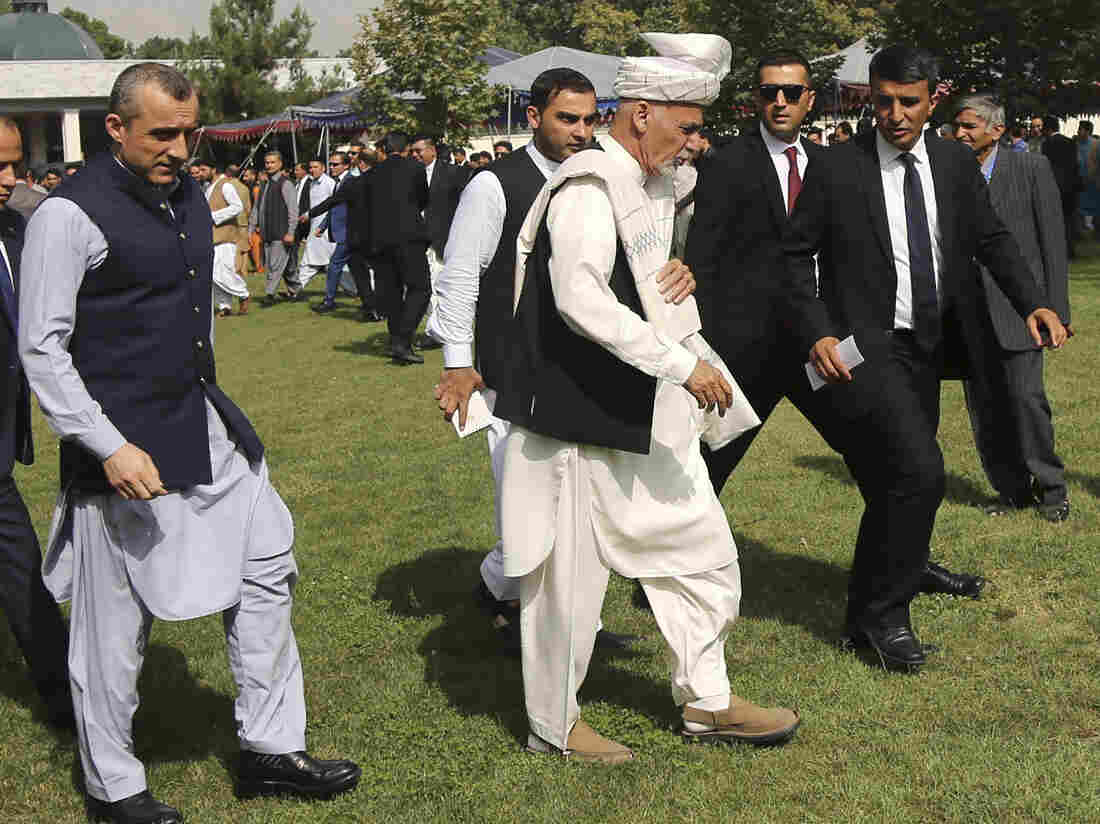 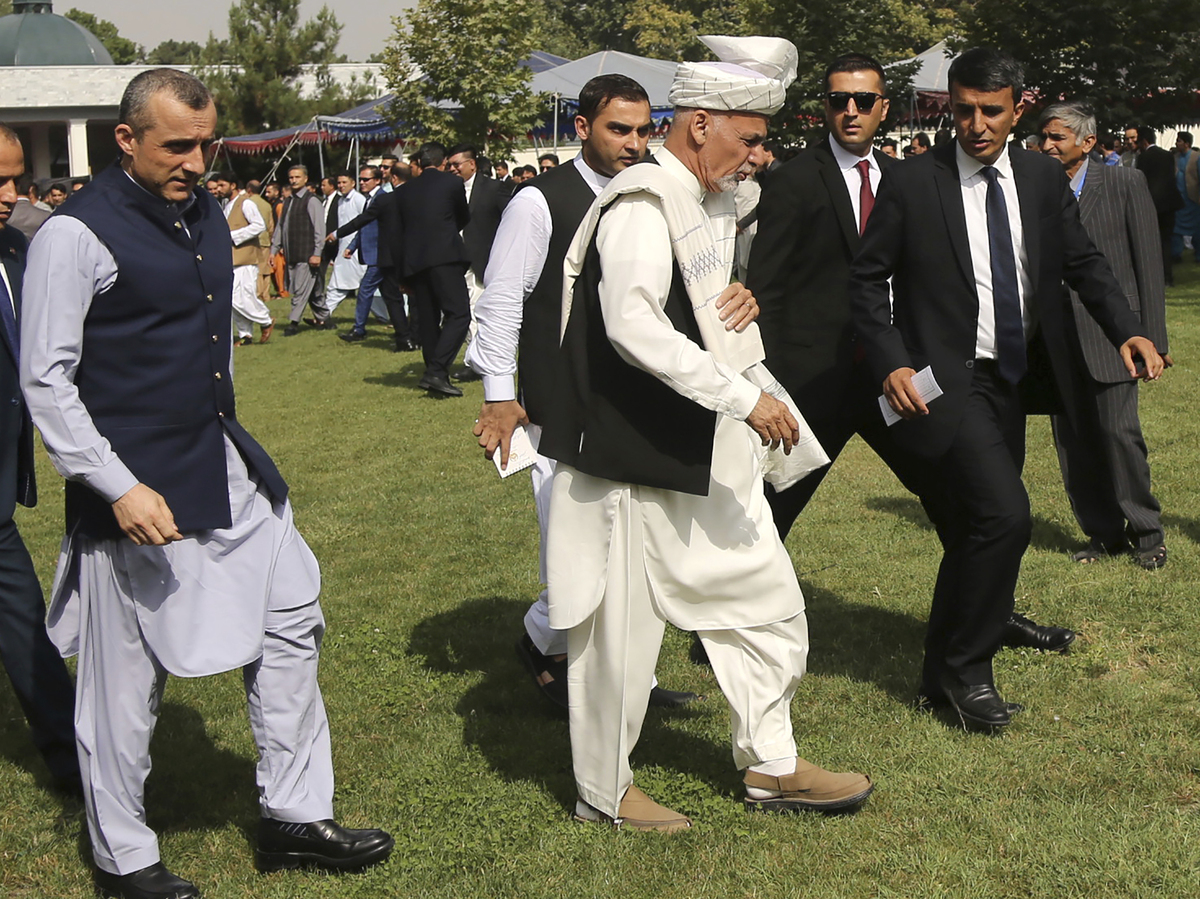 Afghanistan's President Ashraf Ghani (center) arrived for a speech after offering Eid al-Adha prayers at the presidential palace in Kabul.

It is not clear how close the various parties in Afghanistan were to a peace deal, although Taliban spokesmen have referred to the agreement as finished.

Ghani has been in office for five years, urging all parties to give up on thoughts of winning the war and focus on ending it. He has continued to offer various olive branches to the Taliban, who have never accepted his legitimacy and fiercely oppose the U.S.-backed military coalition.

Although the Ghani government is duly elected and officially in charge, Taliban militants control much of the remote countryside. They also regularly strike cities or military bases and often can seek safety in Pakistan, outside the bounds of the conflict.

The inability of American and Afghan forces to confine and eliminate the insurgents, or force them to terms based on that threat, has caused the war to grind on over "fighting season" after fighting season.

At the same time, many within the U.S. national security apparatus see the withdrawal of U.S. forces as tantamount to turning Afghanistan over to the Taliban. Intelligence assessments are bleak about the prospects for an Afghanistan without a stabilizing American military presence.

At the same time, the notion of any respectful negotiating with the Taliban has always been offensive to some in the U.S. national security community.

The timing of this meeting also was especially problematic — just three days before the anniversary of the terror attacks of Sept. 11, 2001, that killed nearly 3,000 people in New York, Virginia and Pennsylvania.

The Taliban praised those attacks at the time and provided a safe haven in Afghanistan for al-Qaida, the organization that launched them. The Taliban have defended the Sept. 11 attacks as recently as this summer.

Rep. Liz Cheney, a Republican from Wyoming, has noted that officials of the George W. Bush administration met at Camp David to plan a response to the terror attacks of Sept. 11, 2001, and said: "No member of the Taliban should ever set foot there. Ever."

At this point, that prospect still seems as unlikely as ever.