Accessibility links
NRA Sues San Francisco After Lawmakers Declare It A Terrorist Organization The pro-gun group says the city and county are trying to discriminate against people "based on the viewpoint of their political speech." 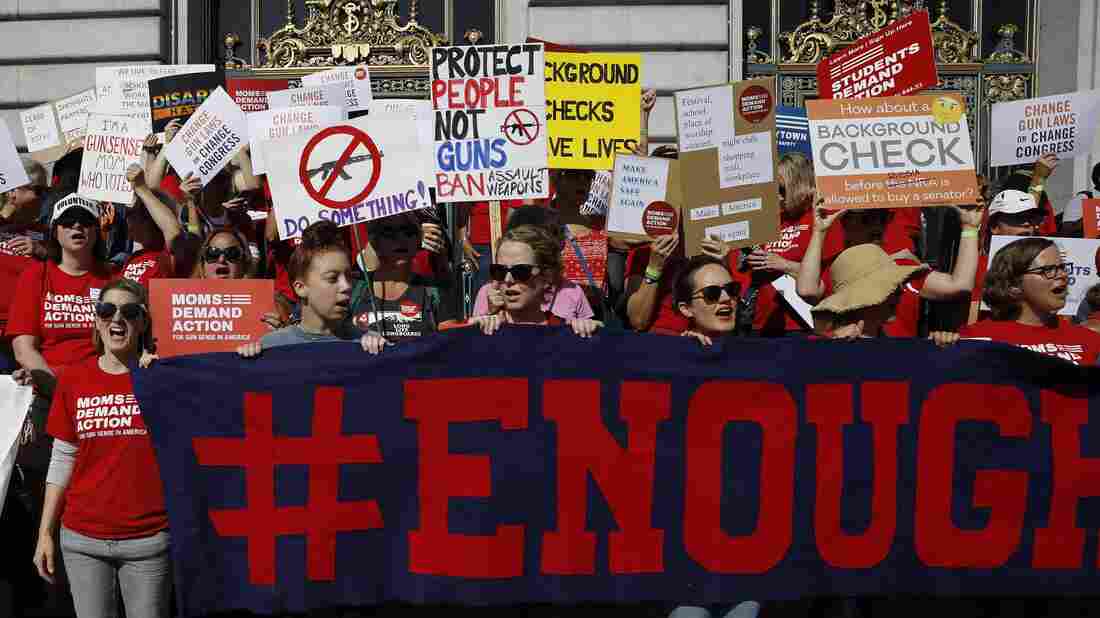 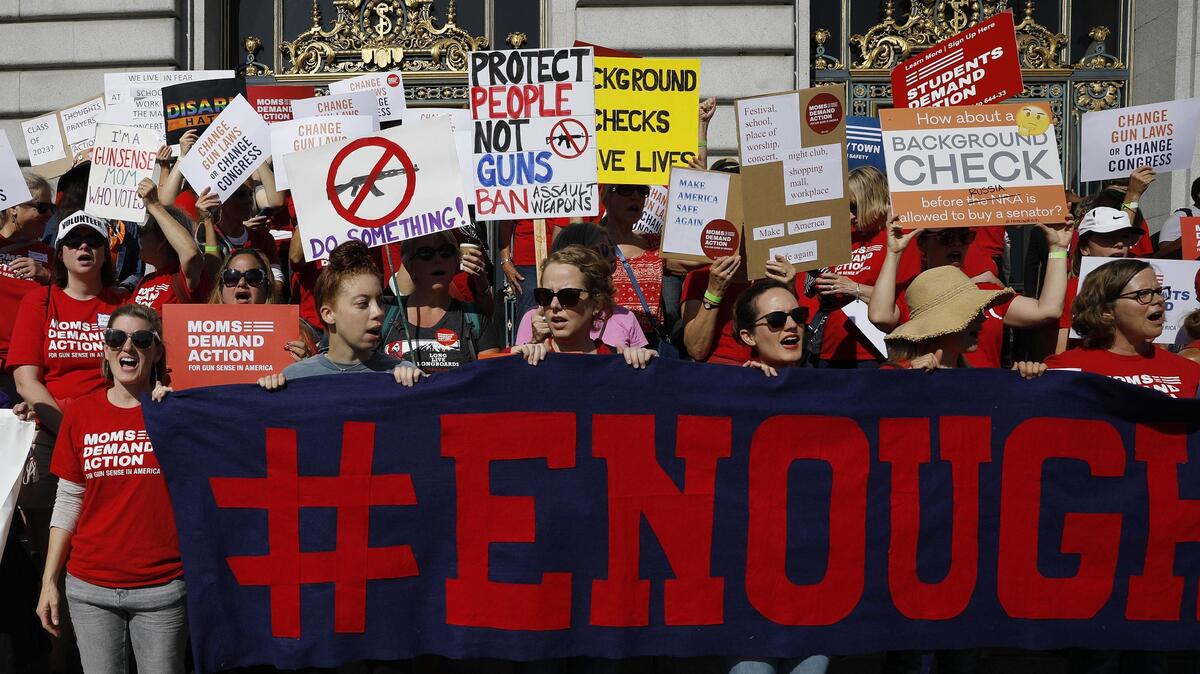 The NRA says San Francisco lawmakers went too far in declaring it a terrorist organization. Here, members of Moms Demand Action for Gun Sense in America take part in a rally against gun violence held at San Francisco City Hall in August.

The National Rifle Association is suing the city and county of San Francisco and its Board of Supervisors over a unanimous vote to designate the NRA a domestic terrorist organization. The pro-gun group says lawmakers are trying to discriminate against people "based on the viewpoint of their political speech."

In its Sept. 3 resolution, the board said San Francisco should "take every reasonable step" to limit any vendors and contractors with which it does business from also doing business with the NRA. It also said it is "urging other cities, states, and the federal government to do the same."

The NRA calls the terrorist designation a "frivolous insult" — but it adds that the lawmakers' actions also "pose a nonfrivolous constitutional threat." The group says San Francisco is violating U.S. laws that protect free speech and association.

The terrorist-designation resolution is not yet official, as Mayor London Breed has not signed it. If she doesn't endorse the bill within 10 days of passage, it will take effect without any other action. But she could also veto the resolution.

Responding to questions from NPR about Breed's position on the matter, the mayor's office said on Tuesday, "As a matter of practice, the Mayor does not sign policy resolutions that are passed by the Board of the Supervisors." It then referred any further questions about the lawsuit to City Attorney John Cote.

Accusing the San Francisco board of using "McCarthyist elements" in an attempt to silence it and carry out a political vendetta, the NRA says the resolution "would chill a person of ordinary firmness from continuing to speak against gun control, or from associating... with the NRA."

The resolution accuses the NRA of using its money and influence "to promote gun ownership and incite gun owners to acts of violence," adding that the group "spreads propaganda that misinforms and aims to deceive the public about the dangers of gun violence."

San Francisco's resolution, which lacks explicit enforcement tools, describes the U.S. as being "plagued by an epidemic of gun violence, including over 36,000 deaths, and 100,000 injuries each year." It also notes the mass shooting in July at the Gilroy Garlic Festival south of San Francisco, in which a gunman killed three people, including two children.

The measure's sponsor, Supervisor Catherine Stefani, is a former prosecutor and a current gun violence prevention activist; she is a leader in the group Moms Demand Action for Gun Sense in America. When her resolution was approved last week, Stefani was quoted by member station KQED as saying the NRA uses intimidation and threats to promote its agenda.

"When they use phrases like, 'I'll give you my gun when you pry it from my cold, dead hands' on bumper stickers, they are saying reasoned debate about public safety should be met with violence," Stefani said.

As his group responds to the San Francisco resolution, NRA CEO Wayne LaPierre says, "This lawsuit comes with a message to those who attack the NRA: We will never stop fighting for our law-abiding members and their constitutional freedoms."

In their resolution, the San Francisco lawmakers state, "All countries have violent and hateful people, but only in America do we give them ready access to assault weapons and large-capacity magazines thanks, in large part, to the National Rifle Association's influence."