Accessibility links
Wind Energy Has A Waste Problem: Disposing Of The Turbines While wind energy is marketed as the future's green energy solution, turbines last only about 20 years, and disposing of their behemoth fiberglass blades is both complicated and costly. 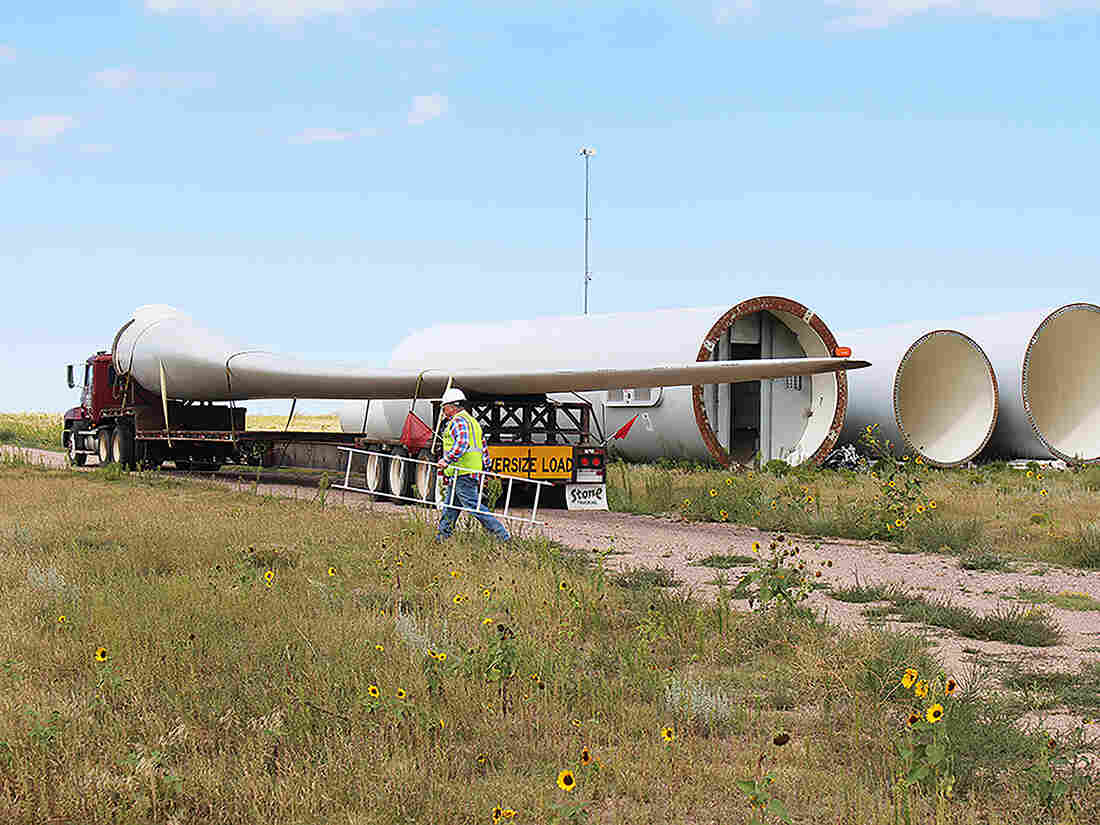 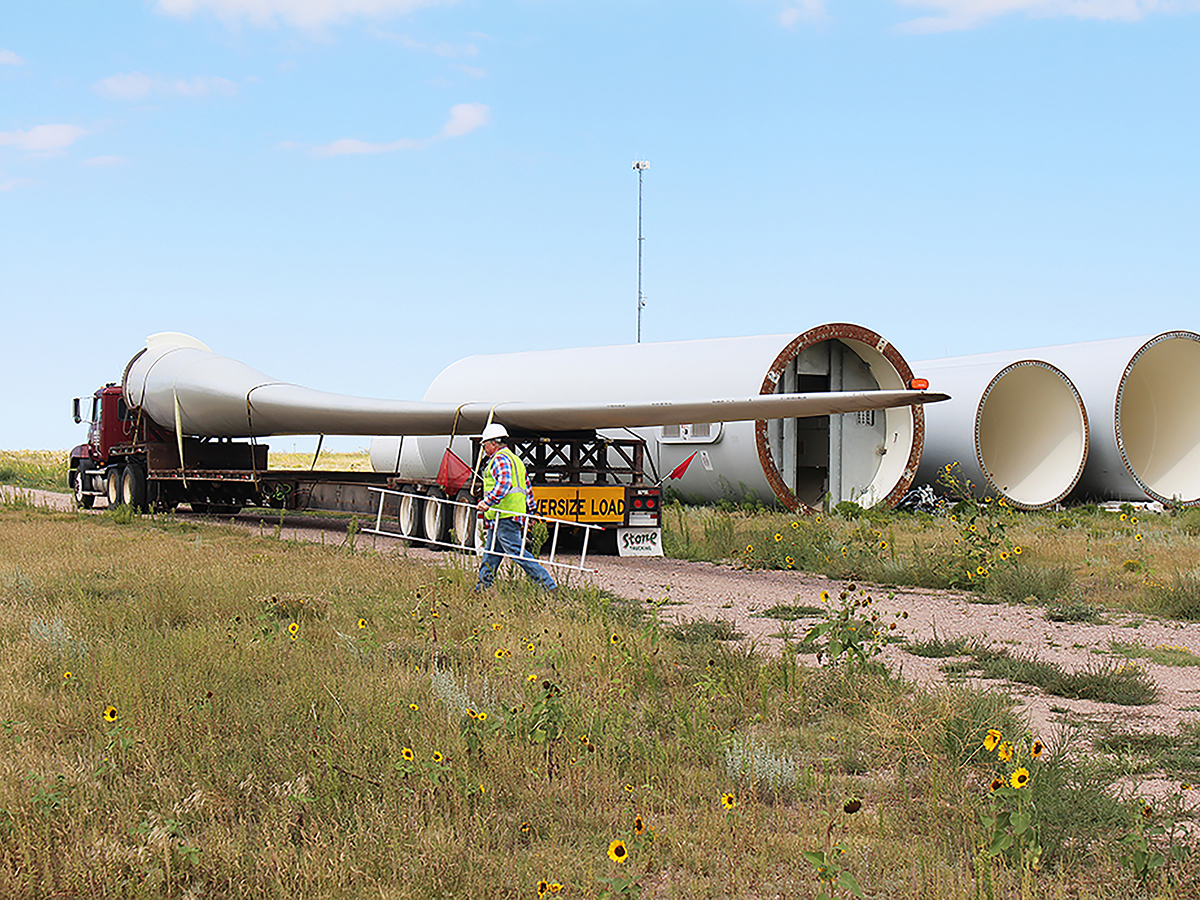 Rob Van Vleet secures a wind turbine blade onto an oversize truck at the Kimball Wind Farm in southwest Nebraska.

While most of a turbine can be recycled or find a second life on another wind farm, researchers estimate the U.S. will have more than 720,000 tons of blade material to dispose of over the next 20 years, a figure that doesn't include newer, taller higher-capacity versions.

There aren't many options to recycle or trash turbine blades, and what options do exist are expensive, partly because the U.S. wind industry is so young. It's a waste problem that runs counter to what the industry is held up to be: a perfect solution for environmentalists looking to combat climate change, an attractive investment for companies such as Budweiser and Hormel Foods, and a job creator across the Midwest and Great Plains.

At the end of a long gravel road on the southwest Nebraska prairie, the state's first wind farm, Kimball Wind Project, is caught in the breeze. But the turbine scrap area looks more like a sci-fi drama set. Rob Van Vleet climbed atop a 127-foot-long turbine blade and walked the length like a plank.

Ninety percent of a turbine's parts can be recycled or sold, according to Van Vleet, but the blades, made of a tough but pliable mix of resin and fiberglass — similar to what spaceship parts are made from — are a different story.

"The blades are kind of a dud because they have no value," he said.

Decommissioned blades are also notoriously difficult and expensive to transport. They can be anywhere from 100 to 300 feet long and need to be cut up onsite before getting trucked away on specialized equipment — which costs money — to the landfill.

Once there, Van Vleet said, the size of the blades can put landfills in a tough spot.

"If you're a small utility or municipality and all of a sudden hundreds of blades start coming to your landfill, you don't want to use up your capacity for your local municipal trash for wind turbine blades," he said, adding that permits for more landfill space add another layer of expenses. 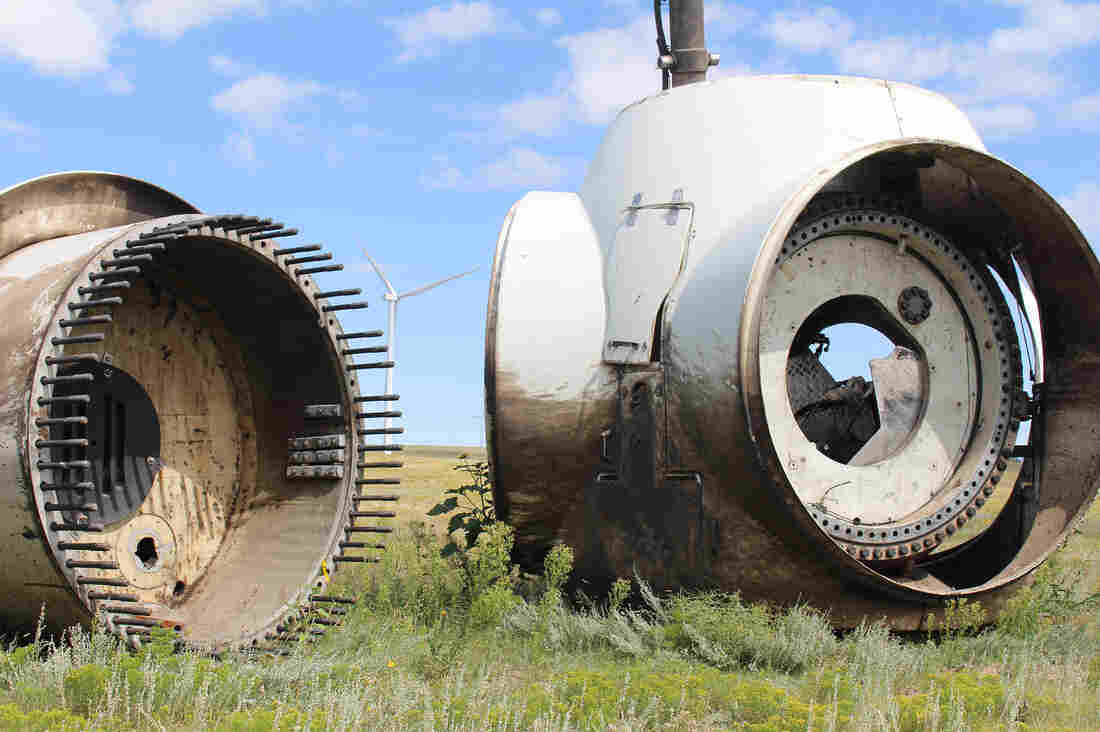 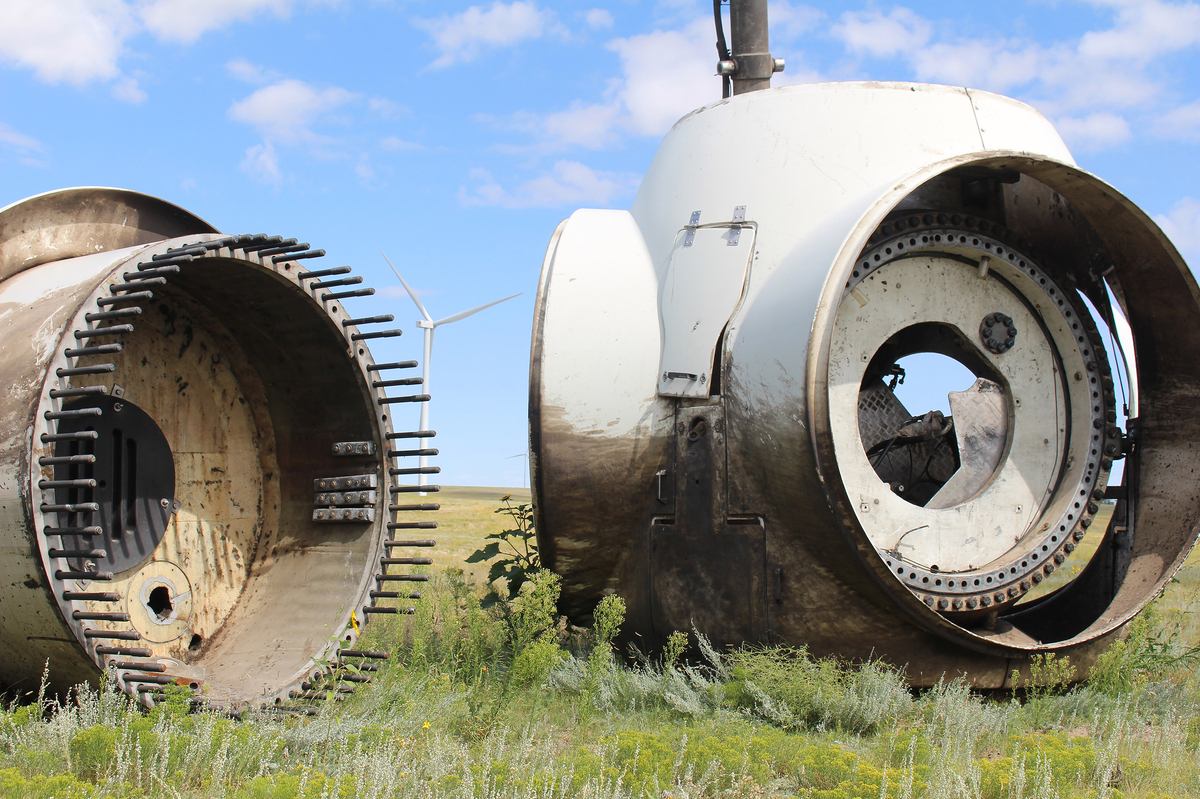 These old wind turbine hubs will be scrapped.

Cindy Langstrom manages the turbine blade disposal project for the municipal landfill in Casper, Wyo. Though her landfill is one of the only ones in the state — not to mention the entire U.S. — with enough space to take wind farm waste, she said the blades' durability initially posed a financial hurdle.

"Our crushing equipment is not big enough to crush them," she said.

Langstrom's team eventually settled on cutting up the blades into three pieces and stuffing the two smaller sections into the third, which was cheaper than renting stronger crushing machines that are usually made for mining.

Karl Englund, a researcher and chief technology officer of Global Fiberglass Solutions, said recycling turbine blades is more regulated in countries that have had wind power for decades. The European Union has waste management rules, so some European companies sell older parts to customers in Asia and Latin America.

"[In Europe], land is at a premium, and you're not allowed to throw things away," he said. "So you have to do it."

Englund believes he's found a way to recycle blades by grinding them up to make chocolate chip-sized pellets. They can be used for decking materials, pallets and piping. His startup opened its first processing facility in central Texas this year, and it's leasing a second space near Des Moines, Iowa.

Van Vleet said finding better ways to decommission wind farms will be an uphill battle, but when it comes to confronting the looming waste issue, "it's something that's happening, whether we like it or not, so we just as well get in on it."

He's exploring his own way to decrease the industry's landfill footprint, in hopes that blade recycling can blossom into a local industry. And for rural areas looking for an economic boost, Van Vleet thinks his risk of recycling just might pay off.

"Out on the prairie, there's not very much scrap," he said. "The idea is to develop the next technology, otherwise, I wouldn't be doing this.

"We lose money on every blade we haul."