Accessibility links
In Sharon Robinson's 'Child Of The Dream,' A Teenage Eye On Civil Rights The pioneering baseball player's daughter, Sharon Robinson, has written <em>Child of the Dream,</em> a chronicle of 1963 — a critical year for the Civil Rights movement, and also when she turned 13. 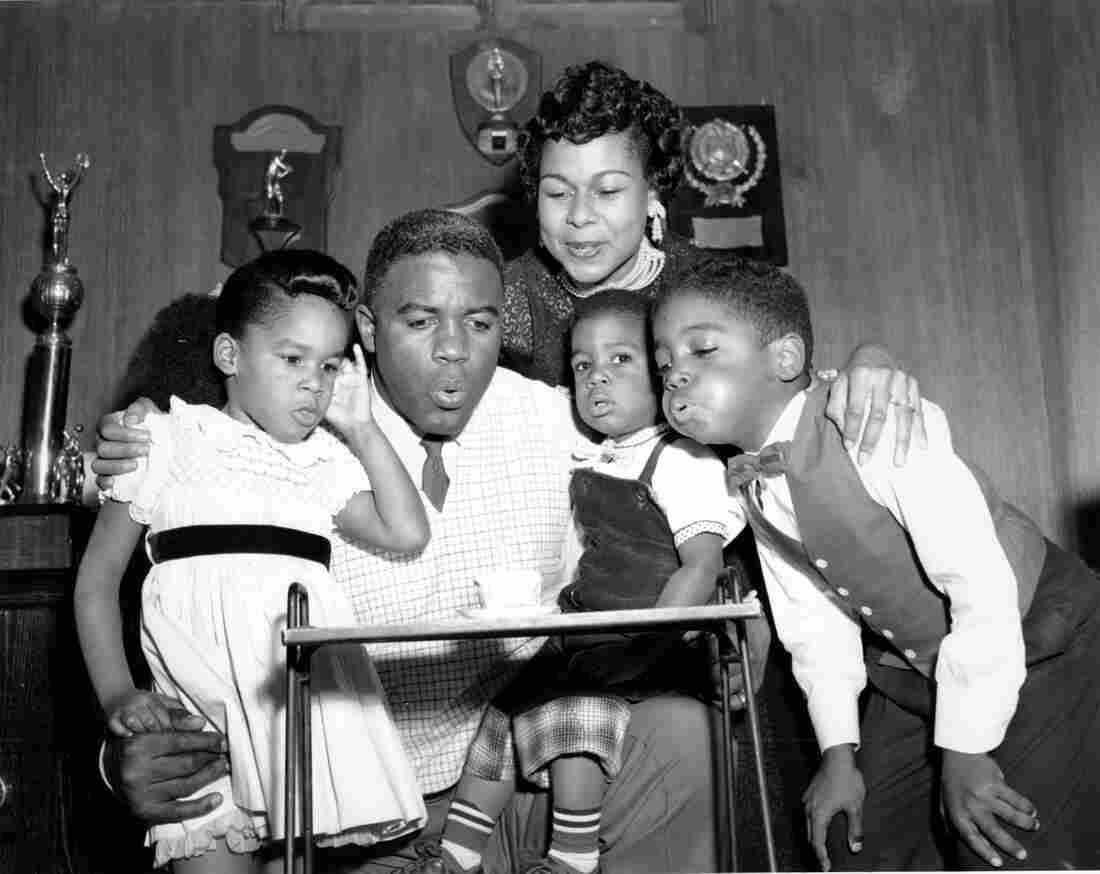 Jackie Robinson draws his family close to help him blow out a birthday candle in 1954. From left, his children Sharon, David, and Jackie Jr., with his wife Rachel, above. AP hide caption 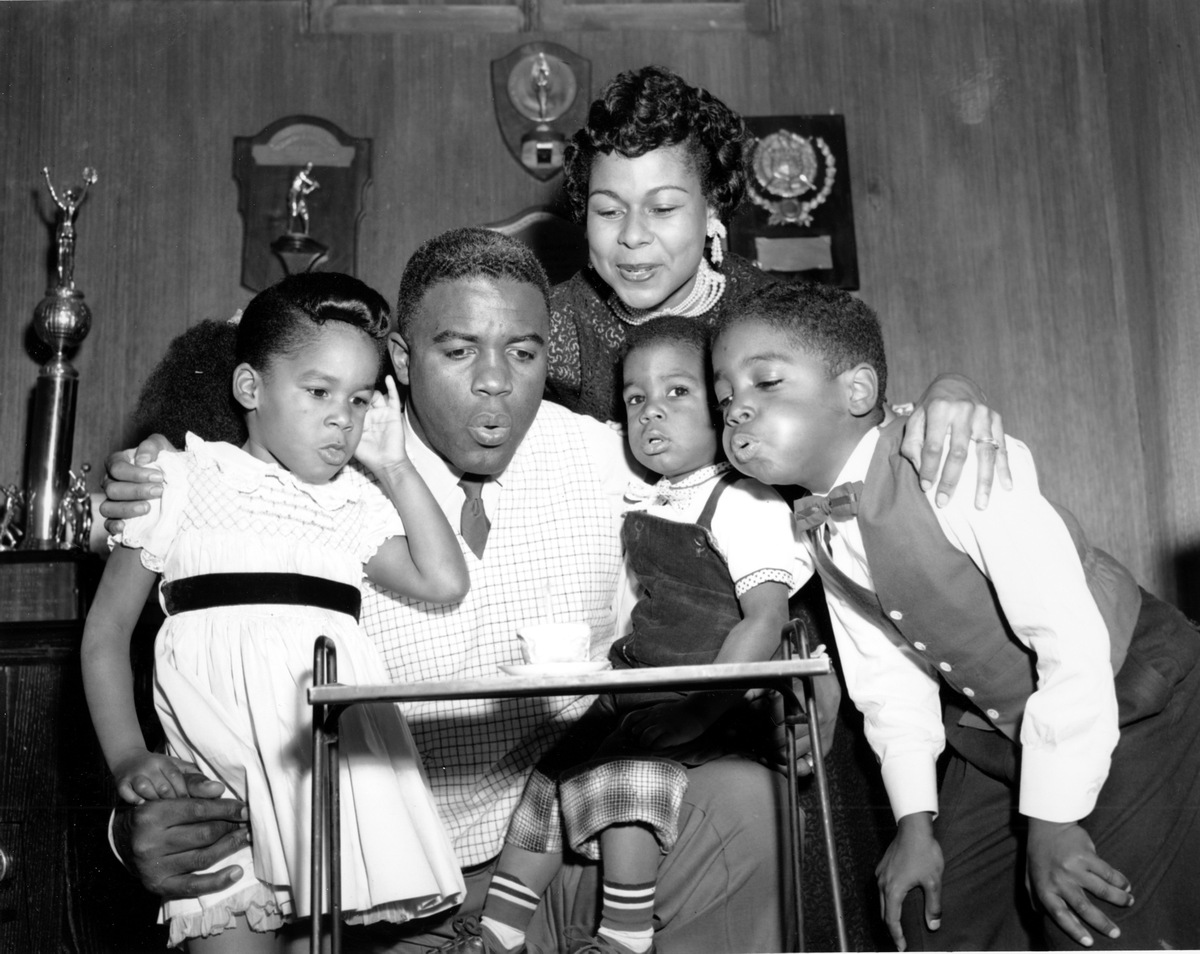 Jackie Robinson draws his family close to help him blow out a birthday candle in 1954. From left, his children Sharon, David, and Jackie Jr., with his wife Rachel, above.

In the 1960s Sharon Robinson was not living the life of a typical, African American teenager. Robinson was born a few years after her father, Jackie Robinson, became the first African American baseball player in the MLB in 1947. Her family lived in a wealthy neighborhood in Stamford, Conn.; she met celebrities on the weekends; she owned a horse.

Her new book, Child of the Dream, is a coming of age memoir chronicling the events of 1963 — the year she turned 13 and a critical year for the Civil Rights movement. 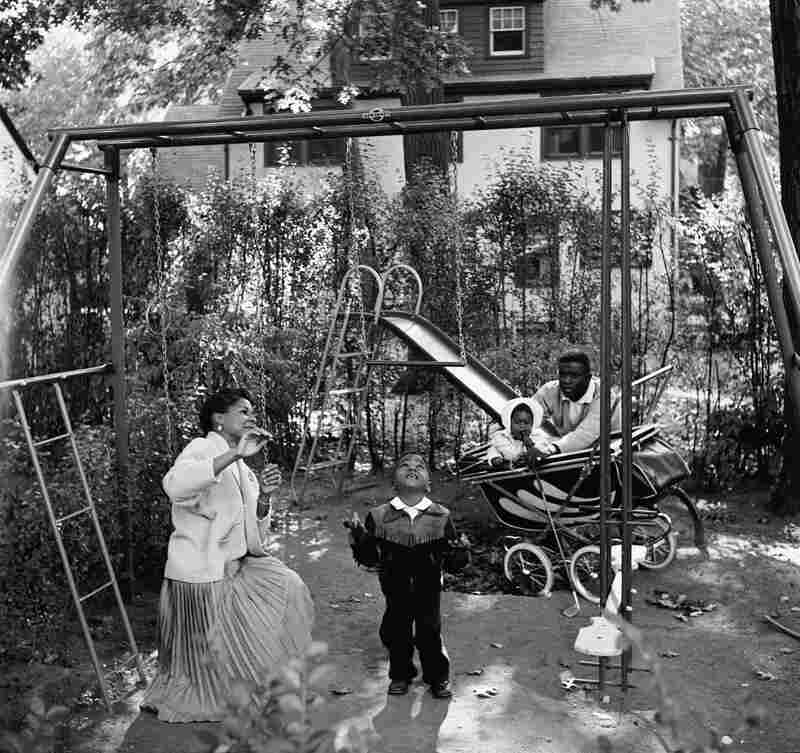 Jackie Robinson and his wife Rachel play with Jackie Jr. (left) and Sharon in the backyard of their home in Stamford, Conn., circa 1951. Hulton Archive/Getty Images hide caption 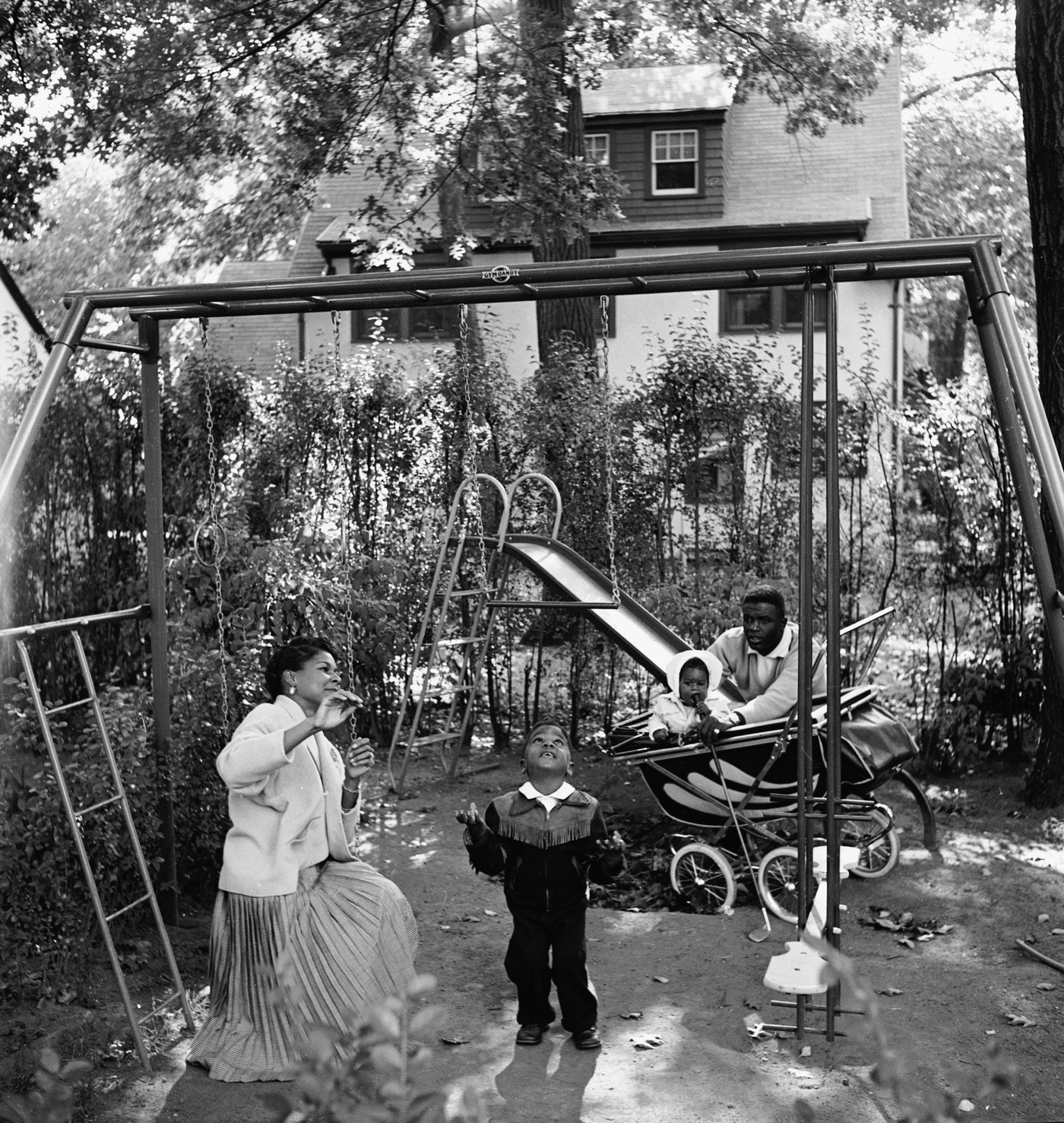 Jackie Robinson and his wife Rachel play with Jackie Jr. (left) and Sharon in the backyard of their home in Stamford, Conn., circa 1951.

She was one of the only black children in her school and her neighborhood, and Robinson remembers feeling disconnected from the black community. Around the time she turned 12 she says she realized: "Something was really wrong here. I had to pull away from this white world in order to be a part of the black world."

Child of the Dream is written for a young audience — Robinson shares typical teen concerns as well as one-of-a-kind experiences: One moment she's worrying that no white boys will ask a black girl to dance, and in the next she's wondering how she should greet Martin Luther King Jr. when he arrives at her home for a fundraiser.

Robinson says today, when she visits children in classrooms, they see her as a "confident and accomplished" adult. "But that didn't just happen," she says. "I had my own trajectory and I wanted to share that with kids."

On whether she recognized her own privilege growing up

Oh, I understood it. We would go downtown to get our hair done, to the black side of town and my brother played pool down there so I spent a lot of time downtown. I knew it was very different.

I didn't really think of it as privileged, though. I thought of it as isolated, actually. I wished I was downtown. It was frustrating. We didn't go to a black church. We went to a white church. Which was fine when I was a little kid, but as I got older I really wanted to be a part of the black community. 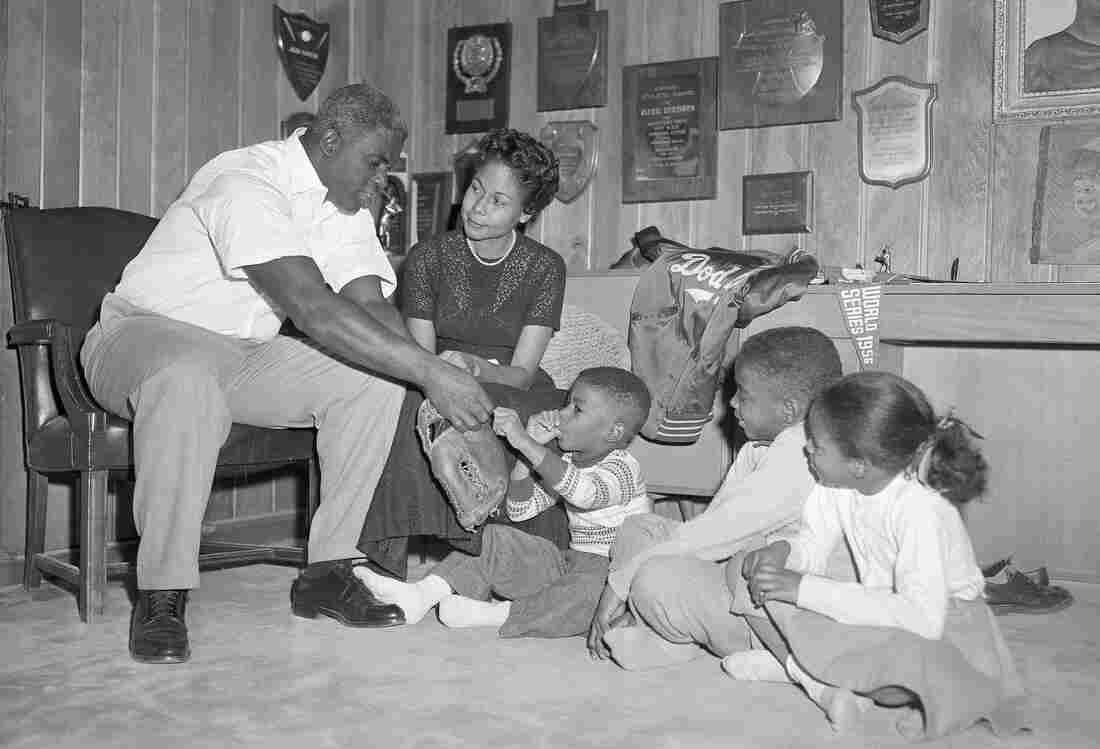 Jackie Robinson and his family sit in the trophy-decorated den of their home in January 1957. From left, Jackie, Rachel, David, Jackie Jr. and Sharon. Harry Harris/AP hide caption

On her relationship with her dad, and politics

[During] our dinner table conversation, we always had some time to talk about what was happening with us kids, but it always moved into what was happening outside of our home. So we were very focused on what kind of social changes were happening. ... 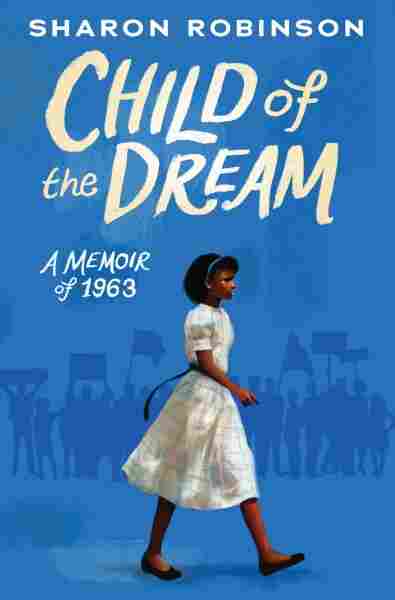 Child of the Dream

I wanted to go to Birmingham to march with other kids ... to watch those children walking down the street singing — I just couldn't believe how much courage they had. ...

I asked Dad to take me with him to Birmingham. And he said, "Not now, but I'll figure this out." And when he came back he said ... "We're going to start doing fundraisers at our home and you kids are going to be as much a part of that fundraising as your mom and I are going to be. Everyone will have a role and the money we raise will go back to Birmingham or wherever the money is needed in the Civil Right movement." ...

That first jazz concert, I got it. We worked hard, and it was an incredible experience — but we also produced money. We sold hot dogs and sodas and us kids raised a significant amount of money ... a little over $1,000. It seemed like big money to us.

On the day she met Martin Luther King Jr.

Of course, Mom had told us beforehand how to behave and all that. So we get outside to greet Dr. King as he gets outs of the car. We come out of the front door. ... I'm a little bit shy and yet I'm very proud and excited.

And then Dr. King acknowledges us — because my mom and dad were telling him that we were also participating in fundraising, selling the hot dogs and sodas — Dr. King looks to us and calls us foot soldiers.

I don't think I really knew what foot soldiers were at that point, but it sounded like, "We are marching. We are a part of this march!" 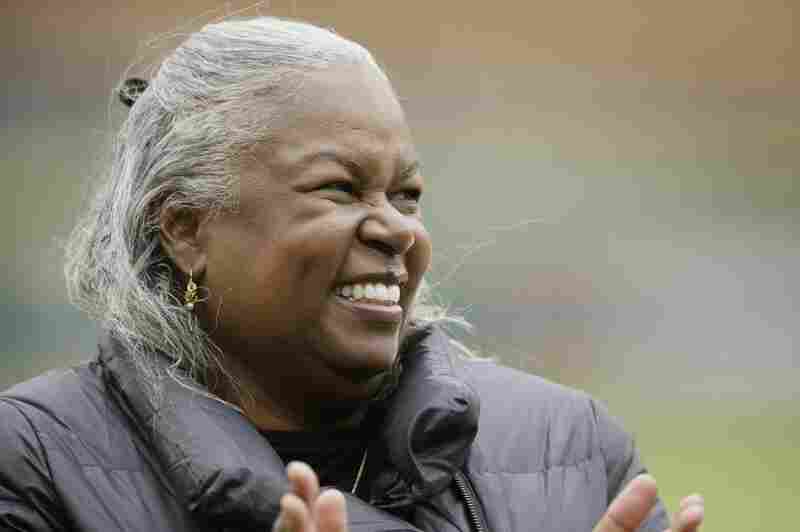 Sharon Robinson attends a game between the Detroit Tigers and the New York Yankees in April 2015. Carlos Osorio/AP hide caption 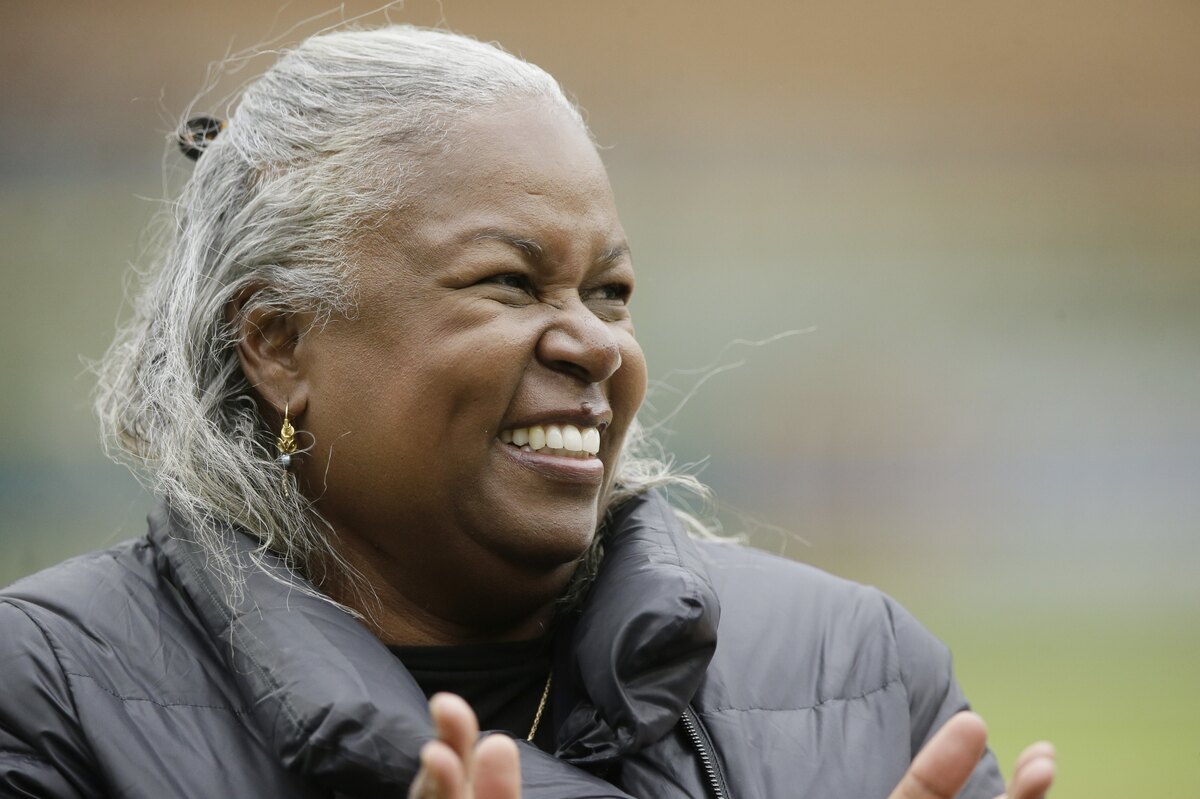 Sharon Robinson attends a game between the Detroit Tigers and the New York Yankees in April 2015.

On why she wrote this memoir now

I had wanted to write about the [1963 Birmingham] children's march for years. It was a passion of mine; it was a memory that I had that I just couldn't let go. And I thought it would be helpful for kids to understand that children had a voice in the Civil Rights movement, and that helped change the tide, helped us get the passage of the Civil Rights Act. ...

For me, writing [my story] down helped me find my voice. And I wanted kids to understand that by overcoming obstacles in life, they develop character, but they also develop confidence. I felt like it was so important for kids to have confidence, especially during troubling times.

Justine Kenin and Courtney Dorning produced and edited this interview for broadcast. Andee Tagle and Beth Novey adapted it for the Web.