Accessibility links
Her Own Toy Story: How A 6-Year-Old Girl's Letter Launched 'Plastic Army Women' A handwritten letter to BMC Toys sent by a 6-year-old girl from Arkansas wondering where the female toy solders are prompted soul-searching and eventually a new contingent of Plastic Army Women. 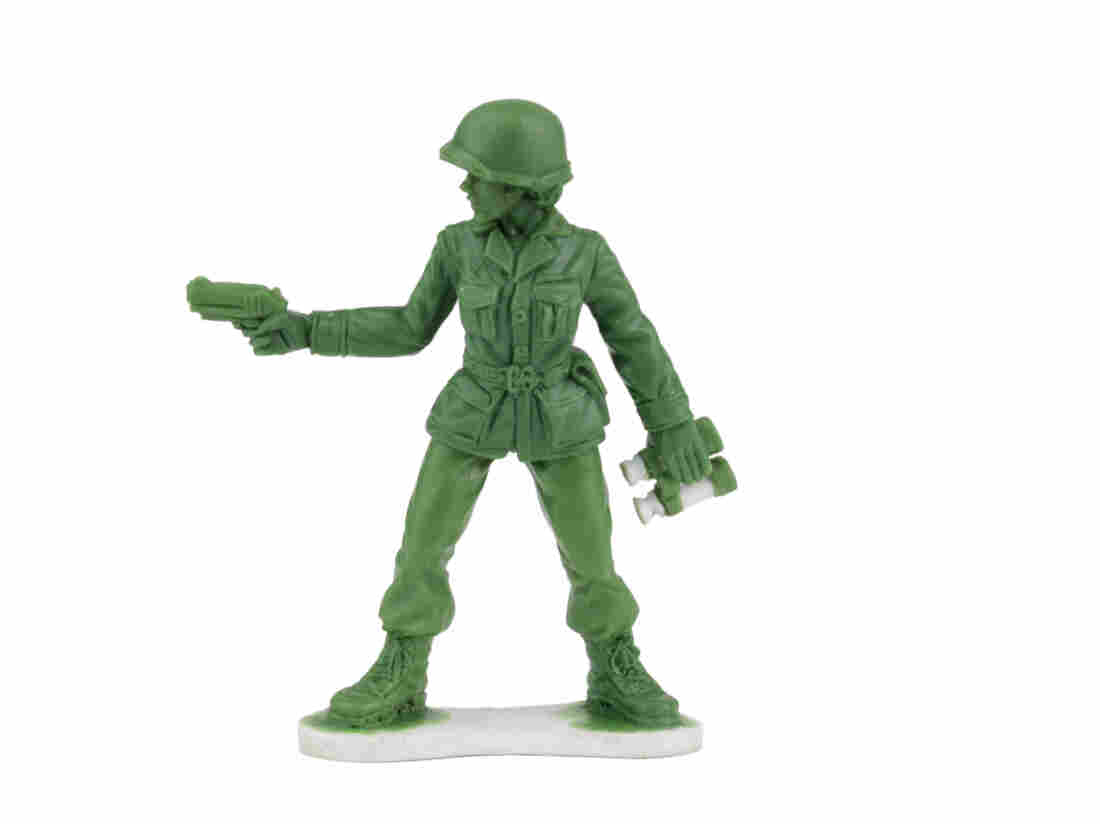 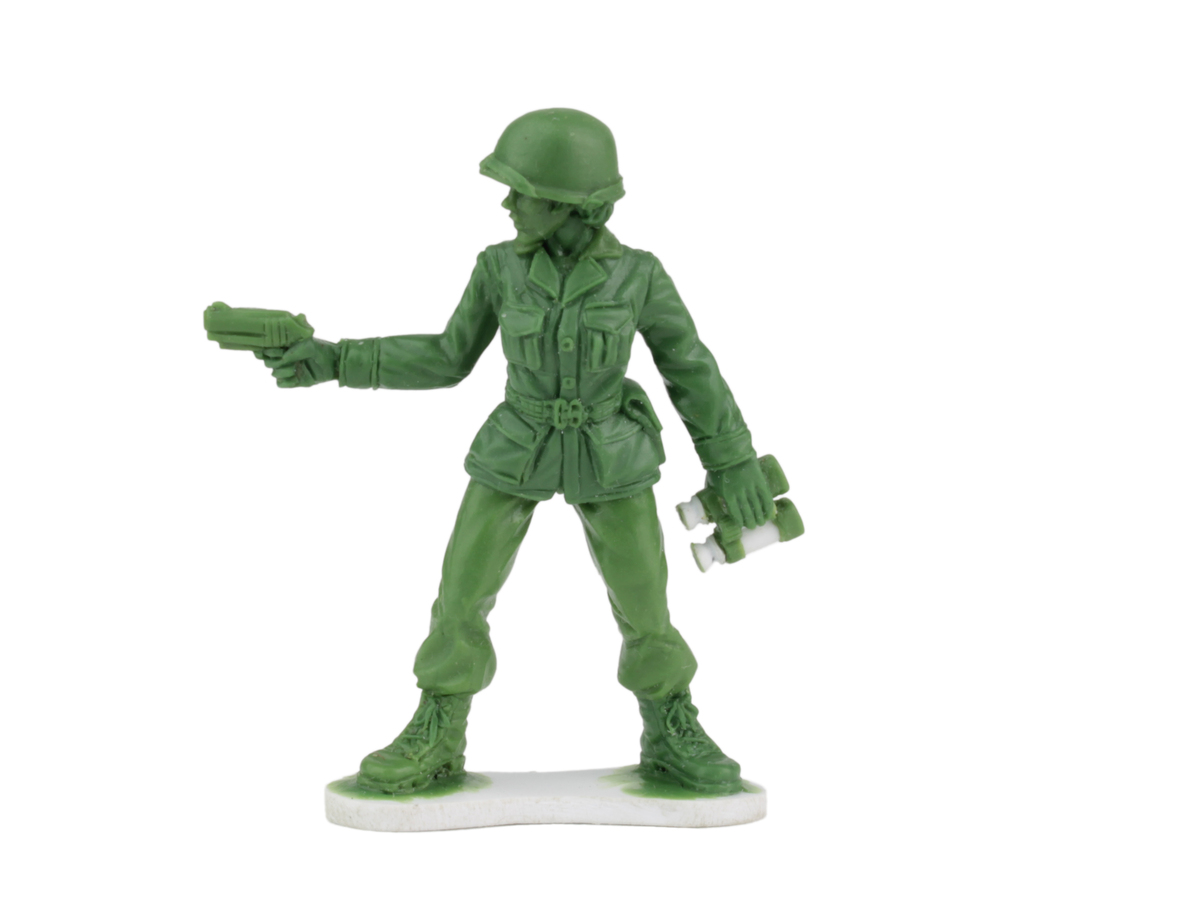 One of the Plastic Army Women that toy company BMC Toys will be introducing next year after a six-year-old girl from Arkansas wrote a letter to the company wondering why there were no female soldiers.

This summer, a young girl from Arkansas wrote a Northeastern Pennsylvania toy company out of frustration.

"My name is Vivian. I am six years old. Why do you not make girl army men?" wrote Vivian Lord to BMC Toys.

To Jeff Imel, the president of BMC Toys, which makes the iconic Green Army Men figurines, it was a worthy question and one he had mulled over for years.

"It was a heartfelt letter," Imel told NPR. "And it reminded me of being a kid and always wanting that toy that you couldn't get in the gumball machine," he said. "So I really looked into it."

After conducting research into what kind of demand there might be for the little Green Army Women, he decided recently to answer Vivian Lord's question with an announcement: "It's happening." 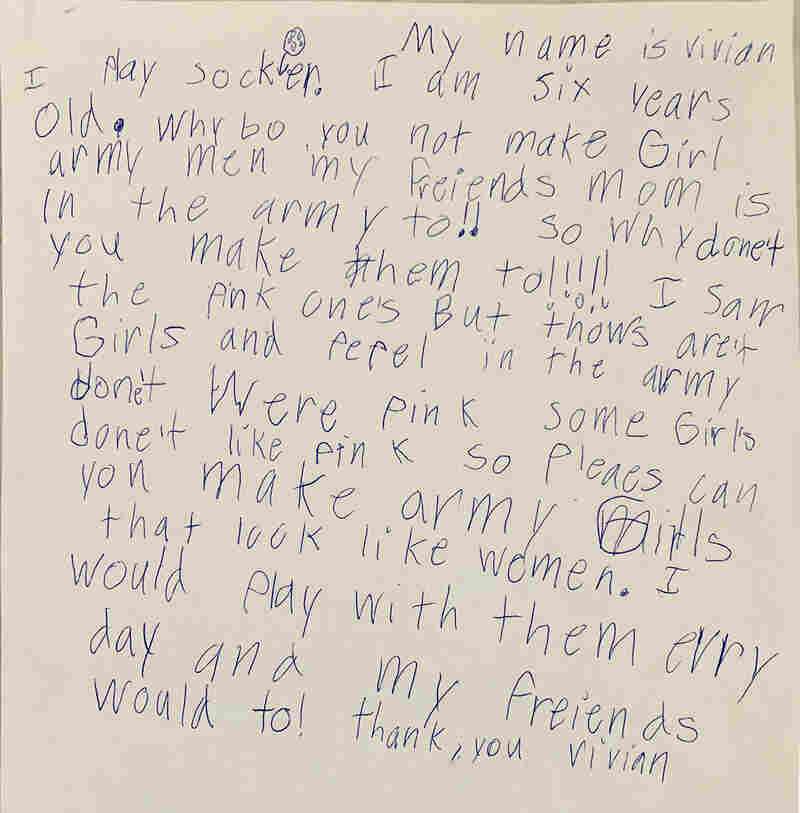 The letter that six-year-old Vivian Lord wrote to BMC Toys this summer wondering why the company did not feature women among its little green solider figurines. Courtesy of BMC Toys hide caption

The Green Army Women figurines will now be available by Christmas 2020 in four different military poses.

"What's been really surprising to me is how many women have contacted me since Vivian's story aired on national television to say they wish they had little Green Army Women when they were children back in the '60s," Imel said.

Among the stances that will hit store shelves next year: a female captain holding a handgun and binoculars and a kneeling female solider holding a bazooka, ready to launch.

"The bazooka is always a favorite," Imel said.

Financing the design and development of the new soldiers was always the biggest obstacle for the Scranton-based toy company.

Imel is BMC Toys' only full-time employee. The production happens in Pennsylvania, Michigan and some of it is completed overseas.

"By the time you figure out the cost of everything involved in making an original set of plastic toy figures in this size," he said. "It starts around the cost of a modest new car."

Imel said he had long been kicking around the idea of adding a set of female toy soldiers to the miniature toys that date back to the 1930s. And though "everyone loved the idea," he said budget constraints impeded turning the idea into reality.

A customer, retired Fleet Master Chief JoAnn Ortloff, reached out to him looking for female toy soldiers for her granddaughters, which renewed his thoughts on the female set.

"That letter came at a time where I was thinking about getting into new production," Imel said.

When reached by NPR, Ortloff said she was concerned about how women in the military are represented, even in toy form.

"We were often asked for our hushand's IDs or what our husband's did in the military and were not often recognized as being the active duty member," she said.

The tiny green troops, she said, should reflect the fact that women now serve in combat roles in every military branch.

"It's time that we have some equal representation in our toy soldiers to pass down," Ortloff said. 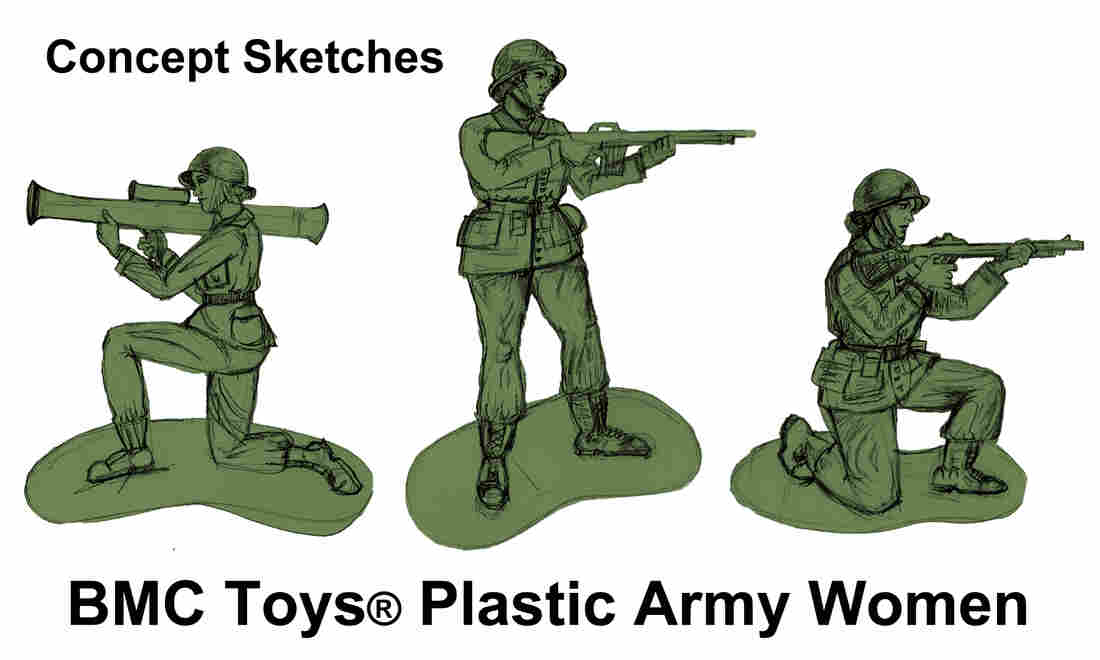 Artist sketches depicting prototypes of some of the poses that are planned to be among a new fleet of plastic army women by BMC Toys. Courtesy of BMC Toys hide caption

But the real spark was the national attention drawn from the handwritten letter Vivian Lord sent to Imel.

"Some girls don't like pink, so please can you make army girls that look like women?" the young girl wrote. "I would play with them every day and my friends would to!"

It may set the company back financially, but hopefully, Imel said, customer demand for the new solders will even out his books.

"I can't wait to buy some girl army toys, and I can't wait to play with them," said Vivian Lord, who just started first grade in the Little Rock area.

Some customers pushed back on the female depictions, arguing that making women in the mold of mid-century military soldiers would be rewriting history, since women were not allowed in combat during that era.

But for Imel, that criticism is based on a poor understanding of how the toys function in modern society.

"The plastic army men are not just a toy version of soldiers in World War II movies," he said. "They exist in their own universe."

Plus, he said, the toys open the imagination of children and even help them put themselves at the center of their stories.

"Every kid wants to be the hero of their story," he said. "It shouldn't be up to us to decide who the hero is. Girls should be able to connect to the toys just as much as boys do."