Accessibility links
California Lawmakers Advance Bill To Redefine And Protect Gig Economy Workers The bill, which passed the state Senate and is expected to become law, limits the kinds of workers who can be classified as contractors. It has vast implications for companies such as Lyft and Uber. 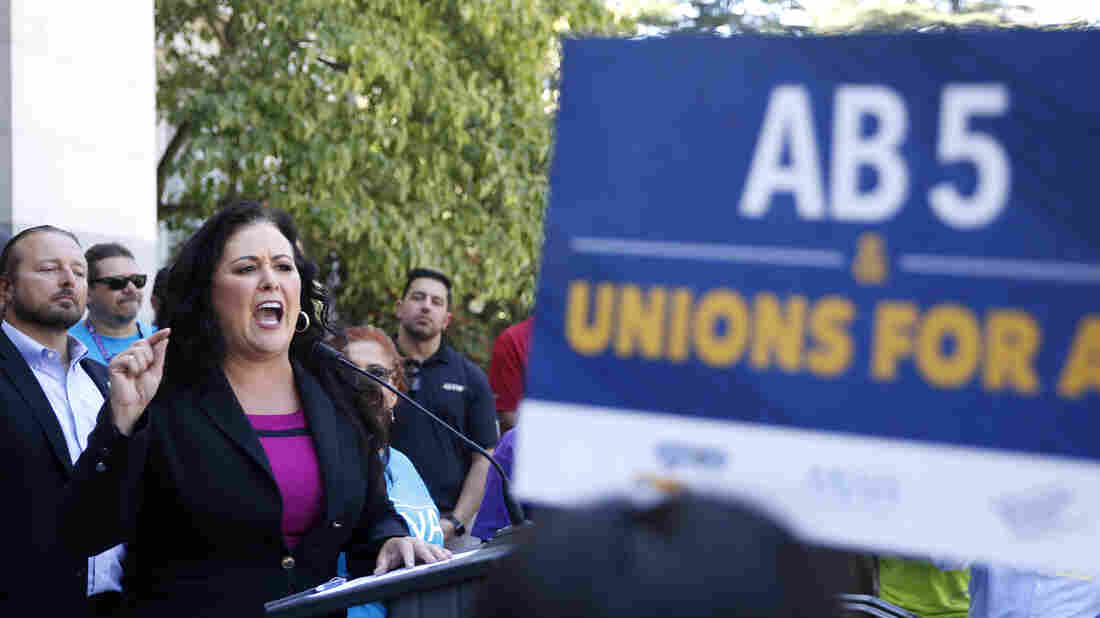 Democratic Assemblywoman Lorena Gonzalez speaks at a July rally for independent contractors in Sacramento, Calif. The measure that passed Tuesday in the state Senate requires companies such as Lyft and Uber to turn many contract workers into employees. Rich Pedroncelli/AP hide caption 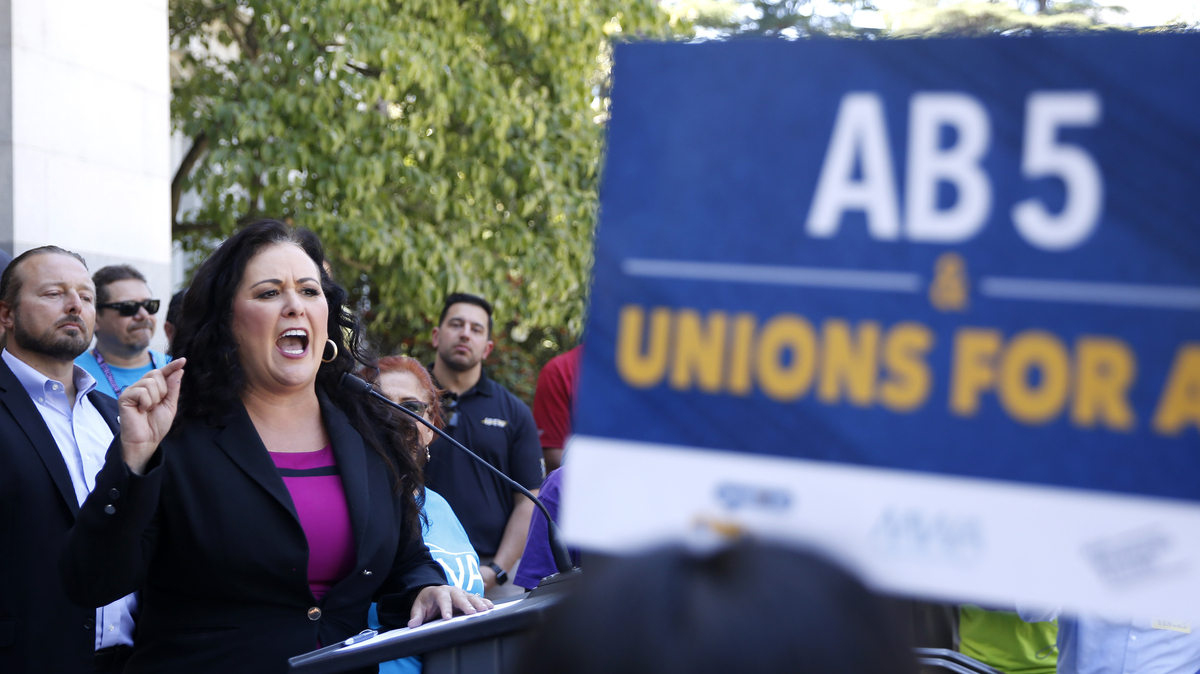 Democratic Assemblywoman Lorena Gonzalez speaks at a July rally for independent contractors in Sacramento, Calif. The measure that passed Tuesday in the state Senate requires companies such as Lyft and Uber to turn many contract workers into employees.

Lawmakers in California have advanced a bill aimed at ensuring minimum wage, workers' compensation and other benefits for contract workers in the gig economy.

The state Senate passed the measure known as Assembly Bill 5 on Tuesday evening. The move is likely to have major ramifications for on-demand delivery and ride-hailing companies such as Uber, DoorDash and Lyft, which classify most of their workers as independent contractors.

The bill passed on the strength of Democratic support, on a party-line vote of 29-11. Now the bill heads to the state Assembly, where it is expected to be approved as well — and California Gov. Gavin Newsom, who endorsed the bill in an op-ed earlier this month, has indicated that he will sign it.

After TWO HOURS of #Dynamex debate, the Senate has approved #AB5 by a straight party-line vote of 29-11. Here’s @LorenaSGonzalez embracing @SenToniAtkins: pic.twitter.com/IrwnDxwgJF

"This is a huge win for workers across the nation!" the California Labor Federation said in a statement posted to Twitter. "It's time to rebuild the middle class and ensure ALL workers have the basic protections they deserve."

The bill authored by Lorena Gonzalez, a Democratic assemblywoman from San Diego, aims to codify a ruling last year from the state Supreme Court. In its 82-page opinion, the court applied a test to distinguish contractors from employees. The bill sums up this distinction in the following way:

As an employee, rather than an independent contractor, a worker is entitled to unemployment benefits and is expected to deposit money into the statewide fund.

In his op-ed, published in the Sacramento Bee, Newsom asserted that the misclassification of employees as contractors has helped exacerbate income inequality. 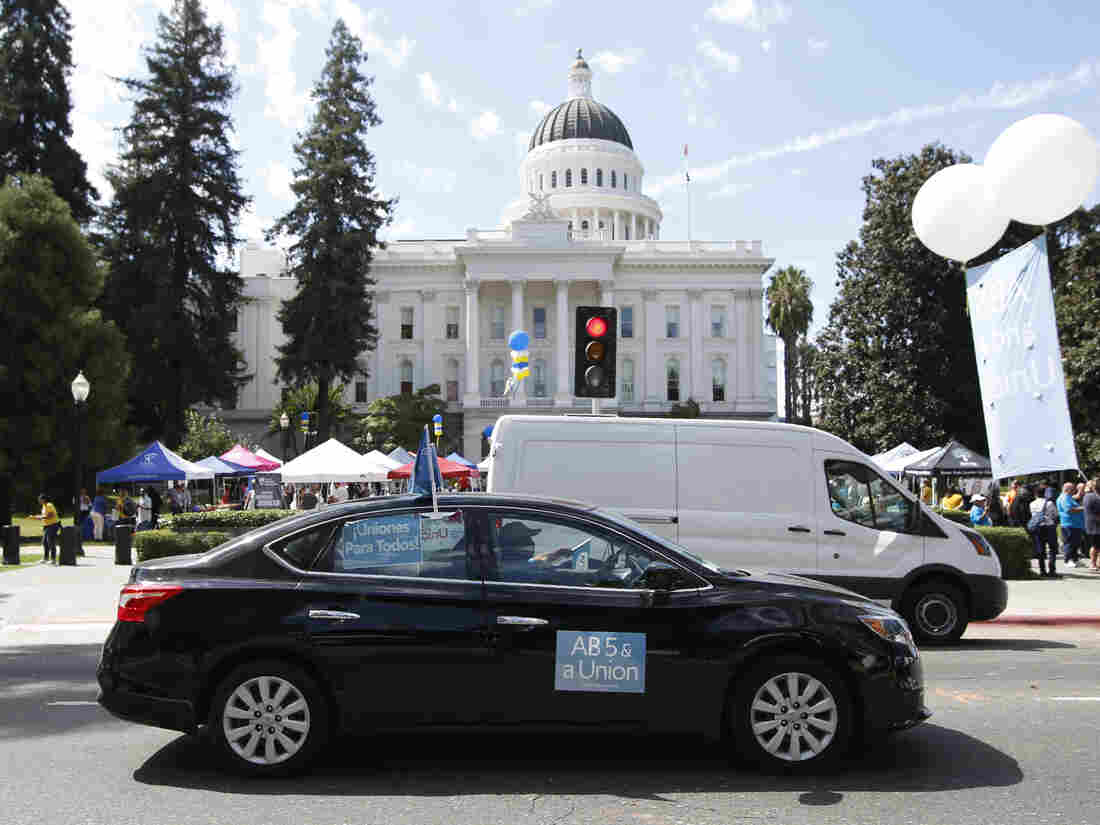 Supporters of the measure, known as Assembly Bill 5, gathered for a rally last month at the state Capitol in Sacramento, Calif. Rich Pedroncelli/AP hide caption 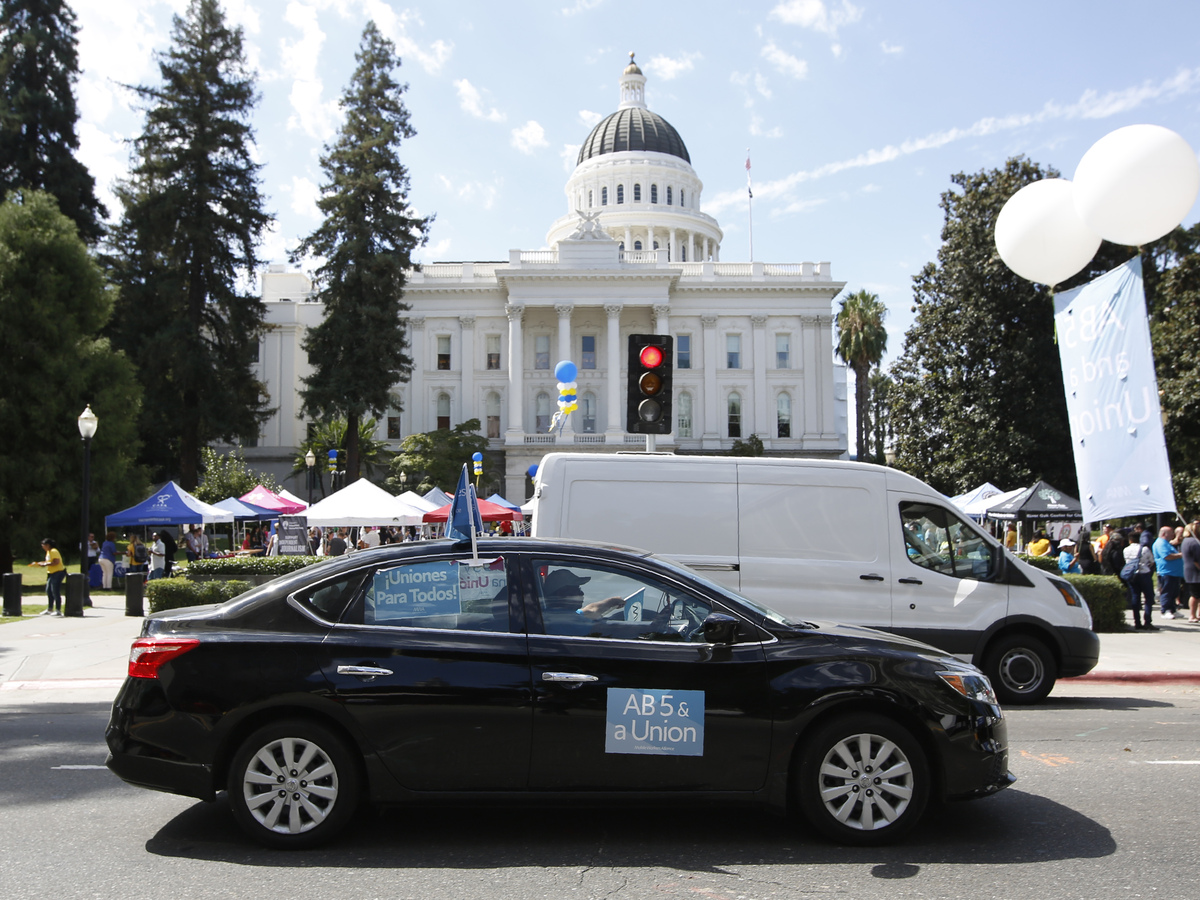 Supporters of the measure, known as Assembly Bill 5, gathered for a rally last month at the state Capitol in Sacramento, Calif.

"Workers lose basic protections like the minimum wage, paid sick days and health insurance benefits. Employers shirk responsibility to safety net programs like workers' compensation and unemployment insurance. Taxpayers are left to foot the bill," he wrote. "Reversing the trend of misclassification is a necessary and important step to improve the lives of working people."

A number of companies have expressed their vehement opposition to the bill, maintaining that such a massive shift in worker status will hamper the flexibility needed to allow their businesses to operate effectively.

"Reclassification misses two important points: First, most drivers prefer freedom and flexibility to the forced schedules and rigid hourly shifts of traditional employment; and second, many drivers are supplementing income from other work," Uber CEO Dara Khosrowshahi and Lyft co-founders Logan Green and John Zimmer wrote in a joint op-ed published in the San Francisco Chronicle in June.

"It's also no secret that a change to the employment classification of ride-share drivers would pose a risk to our businesses," they added.

Lyft, Uber and DoorDash have pledged to put tens of millions of dollars toward a possible ballot initiative to undo the bill's effects.

The bill does carve out exceptions for some occupations, including licensed insurance agents, commercial fishermen and investment advisers, among others. Construction truckers are also exempt from the bill's provisions, though the trucking industry in general is not.

The fact that so many of these fields were excepted "is very telling," Lyft said in a statement after Tuesday's vote. "We are fully prepared to take this issue to the voters of California to preserve the freedom and access drivers and riders want and need."

Uber and Lyft currently employ an estimated 220,000 drivers classified as contractors in the state, according to Sacramento member station Capital Public Radio. But the reverberations of the bill are not expected to end at state lines.

"Everyone is looking to California right now," labor attorney Monique Ngo-Bonnici told NPR's Yuki Noguchi earlier this month, "and they're all following it with bated breath because they recognize that likely whatever happens in California is going to sweep across the country."