Accessibility links
President Trump's Trade Policy Turns The Tables On Democrats When it comes to trade, Trump and the Democrats sound a lot alike. "It's like Donald Trump has co-opted Democratic trade policy," one analyst says. So how do his opponents differentiate themselves? 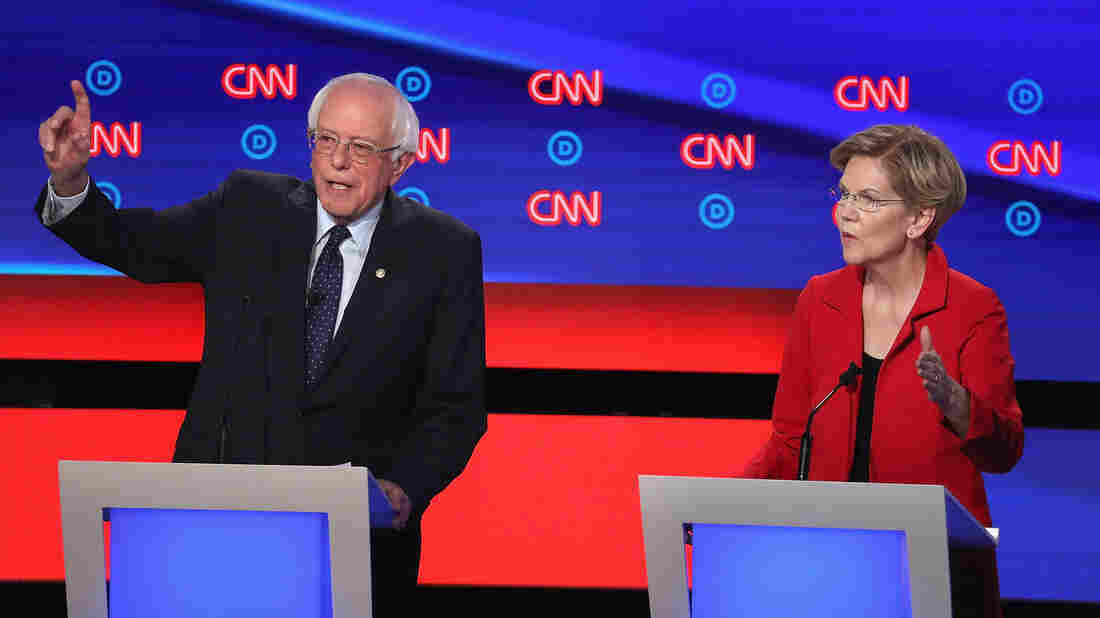 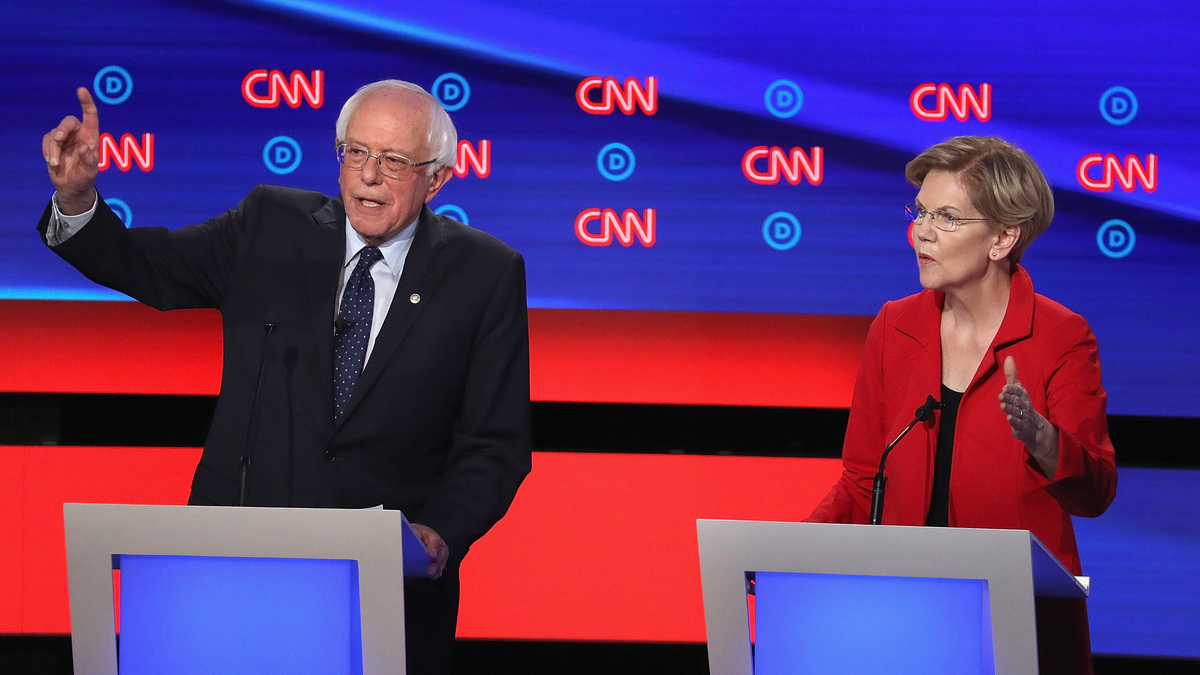 Democrats running for president next year have worked hard to differentiate themselves from President Trump on issues such as immigration, tax cuts and health care. When it comes to trade, that hasn't been so easy.

Trump, after all, came to office as a fierce critic of U.S. trade policy, arguing that previous administrations had been duped into signing free trade agreements that had cost Americans millions of manufacturing jobs.

"I pledge to never sign any trade agreement that hurts our workers or that diminishes our freedom and independence," he said to enthusiastic applause in his nomination speech at the 2016 Republican National Convention.

At times, Trump's rhetoric on trade has sounded pretty much indistinguishable from that of the most liberal Democrats. And since taking office Trump has veered sharply away from traditional Republican policy on trade, through a series of tariffs and trade wars that have upended relations with the most important U.S. trading partners.

Democrats have long been seen as the party of the working class and labor unions, and many shared a strong skepticism about trade agreements.

President Bill Clinton signed NAFTA into law, but he did so over the opposition of most of his fellow Democrats in Congress.

By the time President Barack Obama spearheaded the Trans-Pacific Partnership, a massive trade pact involving a dozen Pacific Rim nations, opposition to trade agreements had only hardened among both Democrats and many Republicans.

After years of watching U.S. manufacturing jobs flee overseas, American voters who were once open to free trade increasingly see it as it harmful to American interests, says Elaine Kamarck, a former aide to Clinton.

"Even before Trump there was the beginning of a sort of left-right consensus that we needed to do something about trade and particularly something about China," says Kamarck, now a senior fellow at the Brookings Institution.

Your Guide To The 3rd Democratic Debate

That has left Democratic politicians who once backed agreements like NAFTA in something of a bind. They have responded by trying to thread the needle, arguing that trade is still beneficial, as long as it's done fairly.

In 2016, Obama's secretary of state, Hillary Clinton, went from supporting the Trans-Pacific Partnership to arguing that it needed to be renegotiated — a position now shared by current front-runner and former Vice President Joe Biden.

"The Democrats that are running for president are largely reflecting where Democrats in Congress have been for decades, and the Democratic base," says Lori Wallach, director of Public Citizen's Global Trade Watch.

"Candidates like Biden ... who have been great defenders of the failed status quo and promoters of it — and may still on policy grounds believe in it — recognize that politically they just can't be there anymore," she adds.

Other Democratic candidates have sought to outflank Trump with even harsher opposition to trade policy.

Trump And Trade: The Point Of No Return?

Massachusetts Sen. Elizabeth Warren argues that Trump's revised NAFTA agreement with Mexico and Canada didn't go far enough. She has proposed a much stricter set of regulations that would essentially bar the U.S. from trading with countries that fail to uphold labor and environmental standards.

Trade pacts like NAFTA are written by multinational corporations for their own benefit, Warren said at a CNN debate in July. "They have no loyalty to America. They have no patriotism. If they can save a nickel by moving a job to Mexico, they'll do it in a heartbeat," she said.

Vermont Sen. Bernie Sanders, who has long been a fierce critic of U.S. trade policy, agreed. "If anybody here thinks that corporate America gives one damn about the average American worker, you're mistaken," he said.

Other Democrats have criticized Trump's tactics, if not his goals. By imposing or just threatening tariffs against traditional U.S. allies such as Canada, Europe and Japan, Trump has undercut his own negotiating position and made it harder to take on the real bad actor, China, several candidates have said.

Tariffs "are a huge mistake," former Texas Rep. Beto O'Rourke said at the CNN debate. "They constitute the largest tax increase on the American consumer, hitting the middle class and the working poor especially hard, and farmers in Iowa and across the country are bearing the brunt of the consequences."

The chaotic nature of Trump's trade agenda gives Democrats an opening to argue that despite his harsh rhetoric, he hasn't really delivered on trade, Kamarck says. There's still no trade agreement with China, and the new NAFTA hasn't made it through Congress yet.

"He's been on and off and around and up and down and nobody knows where the negotiations stand and he says things that aren't true, and so I think on trade this will come down to a matter of the president's competence," Kamarck says.

To Ikenson, of the pro-trade Cato Institute, the tenor of the current debate leaves a lot to be desired.

As Trump fights with China and Democrats ramp up their own rhetoric, no one is left to argue for the economic benefits of trade.

"What happened to the abandoned center?" Ikenson asks. "That seems to me to be a place where a lot of good things can happen."