Accessibility links
Lawsuits Say Lyft Doesn't Do Enough To Protect Women From Predatory Drivers Dozens of women say Lyft drivers sexually assaulted them. They are suing the ride-hailing company to force it to make rides safer. 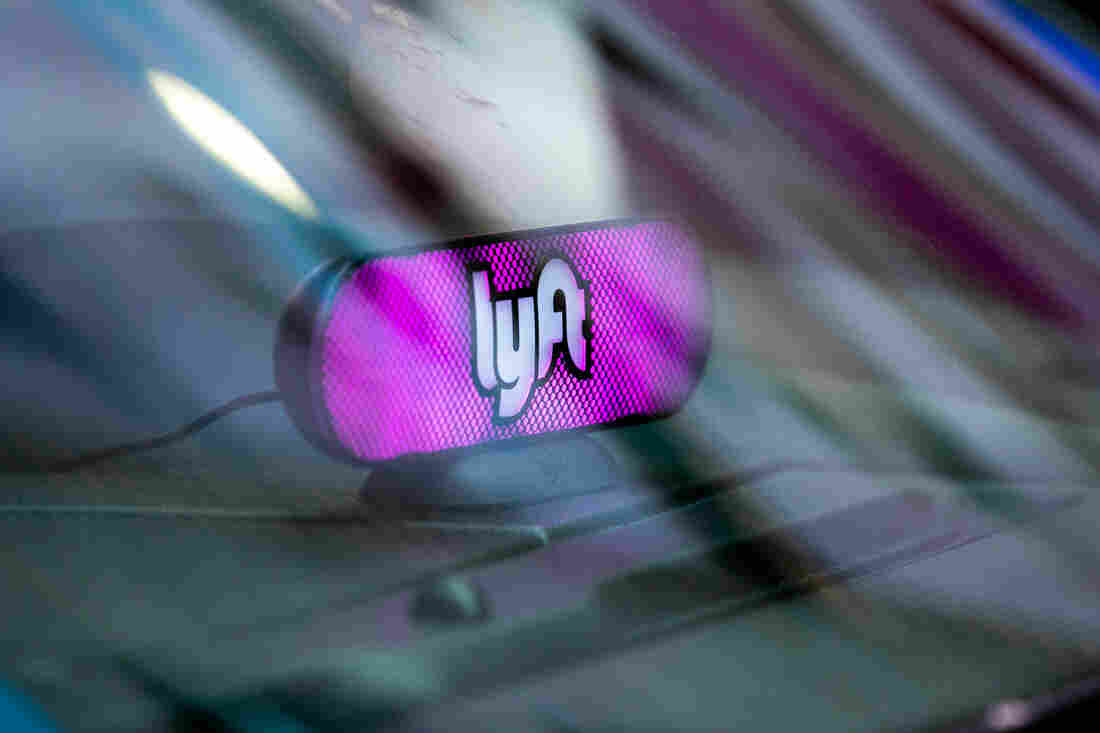 Lyft is under growing pressure to strengthen background checks and adopt better security measures for passengers after dozens of women reported that they had been sexually assaulted by drivers. Jeenah Moon/Bloomberg via Getty Images hide caption 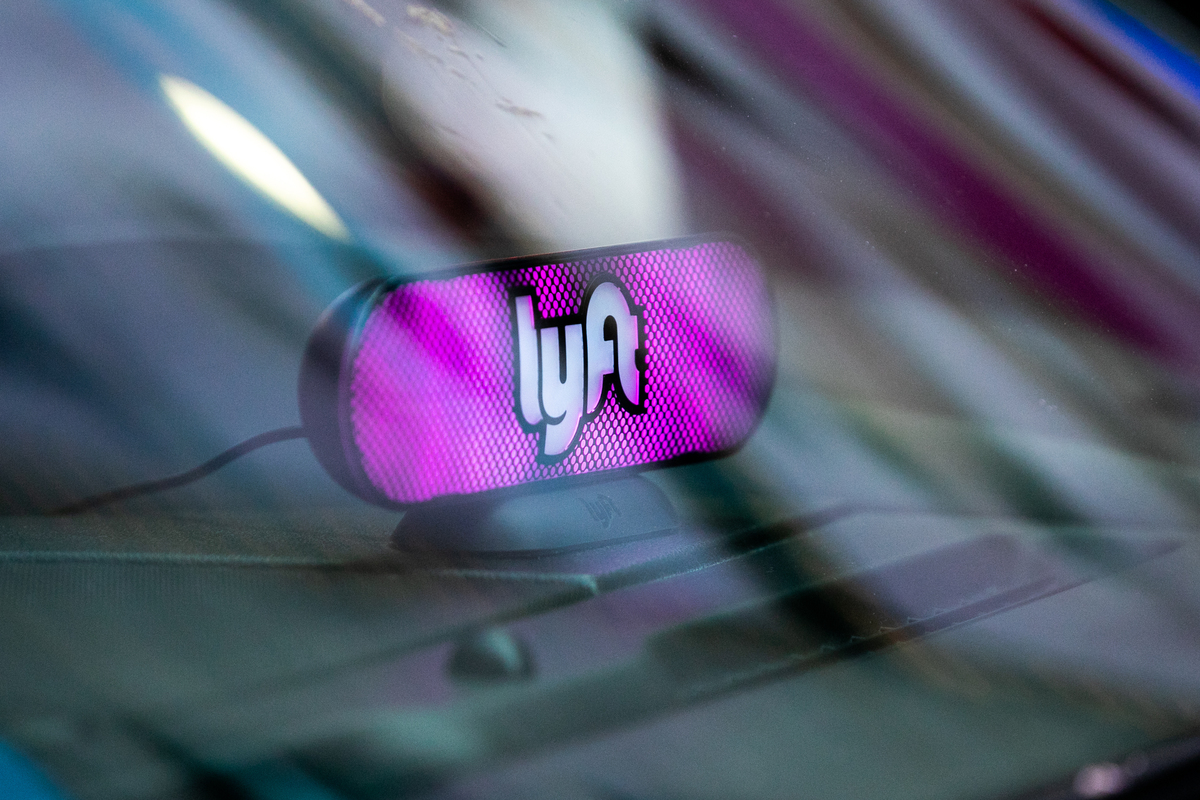 Lyft is under growing pressure to strengthen background checks and adopt better security measures for passengers after dozens of women reported that they had been sexually assaulted by drivers.

Lyft is facing a flood of lawsuits from women around the country who say the ride-hailing company has known for years — and failed to stop — what they describe as an epidemic of sexual assault and rape involving some of its drivers.

"This is out of control. And this needs to stop," says attorney Laurel Simes, a partner in a San Francisco firm representing several dozen women who are suing the company.

Simes says her firm has fielded more than 150 calls so far from women who say they were abused. And more calls come in every day.

"There is a subset of them [Lyft drivers] out there looking for this opportunity, and they go for it," Simes says. "And the results are devastating to the women and girls this happens to."

The women are suing to force the company to fundamentally change the way it approaches safety. They accuse the company of knowing about alleged attacks for years but doing nothing to address the issue.

"If the public knew the true number of sexual assaults by ride-share drivers, women might not ever ride with these companies again," says San Diego attorney Michael Bomberger, whose firm recently filed a lawsuit against Lyft on behalf of 14 rape and sexual assault victims.

There are so many cases coming that Simes' firm is asking the California courts to allow the law firms to coordinate their cases in one court to expedite.

Both sets of civil lawsuits are seeking damages and want the company to toughen the way it monitors and screens drivers. Those fixes would include fingerprint-based criminal background checks, video and/or audio recordings of rides and an option for women to hail a female driver, among others.

"I hope we can create better safeguards and a new system of accountability so that this doesn't happen over and over and over again to women," says a New Orleans woman, identified in court documents as Jane Doe. She is suing Lyft, alleging she was raped by one of its driver in January. NPR does not identify sexual assault victims by name unless they choose to do so themselves.

In response to the series of recent lawsuits, Lyft this week announced new safety measures, including an emergency call button on its app, new training for drivers and sometime later this year a "smart trip check in" that aims to sense when a trip has "unexplained delays" and pings a rider.

The company says it has added "continuous criminal background checks" of drivers. But they do not use fingerprint-based criminal checks, according to lawyers for women suing the company.

Advocates and attorneys say the #MeToo movement has spurred more women to speak out now and overcome the embarrassment, shame and guilt that can accompany sexual assault.

"The advent of the #MeToo movement has helped women and girls be more open to talking about this," Simes says. "There is an initial embarrassment and fear. This is happening to ordinary people who go out for drinks with friends."

Indeed, the growing number of lawsuits may well prove a pivotal #MeToo movement challenge for Lyft, which pitched itself as the socially conscious "woke" alternative to its competitor during the viral #DeleteUber campaign two years ago. Uber lost hundreds of thousands of customers following a series of problems, including a harassment and discrimination lawsuit and accusations of profiteering during protests of President Trump's travel ban. The protests helped lead to the ouster of Uber's CEO and founder, Travis Kalanick.

At the height of the #DeleteUber movement, Lyft co-founder John Zimmer said his company was the aware alternative.

"We're woke. Our community is woke," he told Time magazine, lifting a term from recent social protest movements. And Zimmer added that Lyft is "a better boyfriend."

"They can say that they are 'woke,' but that's not true. There's more and more assaults happening all the time," says attorney Rachel Abrams, who calls the sexual assaults a nationwide epidemic. "They advertise and market themselves as giving a safe ride home and they're not delivering that. They're delivering predators."

One weeknight this past January, Jane Doe met up with a female co-worker at a bar. She ended up having too much to drink. Her friend eventually called a Lyft to take Jane home, usually a short car ride across town. But once in the Lyft, she says, the driver headed far away from her neighborhood.

"For some of it I was probably unconscious in the car," she said in an interview with NPR. "But the parts that I remember I was, you know, trying to bargain with the attacker to please take me back to where I was originally supposed to go."

She fumbled in her purse for her phone. It was gone. She'd accidentally left it at her friend's place.

"And that was where the extreme fear set in that I, you know, couldn't do anything at that point to get out of the situation that I was in," she says.

The Lyft driver drove her to his house, her lawsuit alleges, where he raped and sodomized her. Later, in the middle of the night, she says the attacker drove her home.

"I walked in the door and I called 911," she says. "The police took me to the hospital," where a rape kit was administered, confirming the attack. The driver's skin was found under her nails, DNA evidence, the lawsuit says, that will be used to show Jane Doe tried to fight him off.

Her attacker is now behind bars awaiting trial on rape and kidnapping charges.

Right now it's impossible to tell how many women have reported being sexually attacked using the ride-hailing services. Under pressure, Lyft and Uber have pledged to publicly release their numbers in a "transparency report" later this year.

Only one of the dozen major police departments NPR reached out to said they track assaults by occupation. The Denver Police Department reported that from 2015 through July of 2019 there were 43 reported sex crimes in Denver by drivers of ride-hailing services. During that same period, there were 13 reported sexual assaults committed by taxi drivers, the police department told NPR.

Lyft declined repeated interview requests. In an emailed statement, a spokeswoman said the company is dedicating "more resources in our continued effort to ensure our riders and drivers have the safest possible experience."

Alison Turkos says her experience was anything but safe. Turkos, who also is suing Lyft, says she was attacked one Friday night in Brooklyn, N.Y., in 2017. She wants her name to be used.

Ride-Hailing Revolution Leaves Some People With Disabilities Behind

Ride-Hailing Revolution Leaves Some People With Disabilities Behind

She was out celebrating a friend's birthday and called Lyft from a bar to get home in another neighborhood of Brooklyn. The Lyft driver, she says, instead drove her to a site in New Jersey.

"Where he and two other men proceeded to gang rape me. Multiple times, cheer each other on and high-five each other," she says.

To add insult to injury, Turkos says a Lyft representative she contacted after the attack said he would unpair her from that driver and refund her for the excess ride out of New York. But she was still charged for the original ride. "So in the end I still paid Lyft $12.81 to be kidnapped at gunpoint, trafficked and raped." The FBI has taken over her case from the NYPD's sex crimes unit, which Turkos says bungled her case.

As part of Lyft's response to the reported sexual assaults, the company has added an emergency button to its app so riders and drivers can call 911.

Turkos says that would have done nothing for her. She had misplaced her phone that night. The driver had activated the child safety locks. And, she says, he had a gun.

"Once that gun got pulled on me, my hands were up against that back seat and there was no way that I was going to be able to dial 911," she says.

Lyft competitor Uber also faces multiple civil lawsuits over sexual assault and rape allegations. But lawyers and women's groups say many of those cases, though not all, are being resolved amicably through arbitration. They say the company realized two years ago it needed to take substantive action in the wake of the #DeleteUber campaign.

"They have been very serious about soliciting assistance, guidance, input and training for their staff," says Kristen Houser with the National Sexual Violence Resource Center.

She says in marked contrast to Lyft, her group has worked closely with Uber on bolstering training and other fixes. "They've had a team of folks who have worked alongside of us for more than two years now."

The bigger change, Houser says, may be in corporate culture. So far, Houser credits Uber with trying to become a corporate leader on the issue, "to try to talk to other people about the benefits of taking this on in a transparent and meaningful way and having it be a company commitment," she says. "Unfortunately what we see in institutions of all kinds is that sometimes it takes a lawsuit to really encourage companies to do things differently."

This week Lyft's Zimmer in a statement said the company doesn't "take lightly any instances where someone's safety is compromised, especially in the rideshare industry, including the allegations of assault in the news."

Turkos doesn't put much faith in Lyft changing on its own. These days she has trouble trusting anybody, really.

She's thankful her job allows her to regularly work from home. Some days, she says, her PTSD is so bad she doesn't want to leave the house.

"I sometimes think people don't understand how trauma can break you down to your bones," she says.

"The thing that I want to say to Lyft is: If it's hard for you to hear what happened to me, imagine how hard it is for me to have to survive it and for me to be able to tell you my story."

Turkos says her job now is to heal. And it's Lyft's job to try to better protect women who use their service.

Claire Heddles contributed to this report.