Accessibility links
Popular Refugee Resettlement Programs Closing Under Trump Administration The number of refugees being allowed into the U.S. is the lowest it's been since 1980. Some smaller resettlement agencies are closing, putting refugees' lives further in limbo. 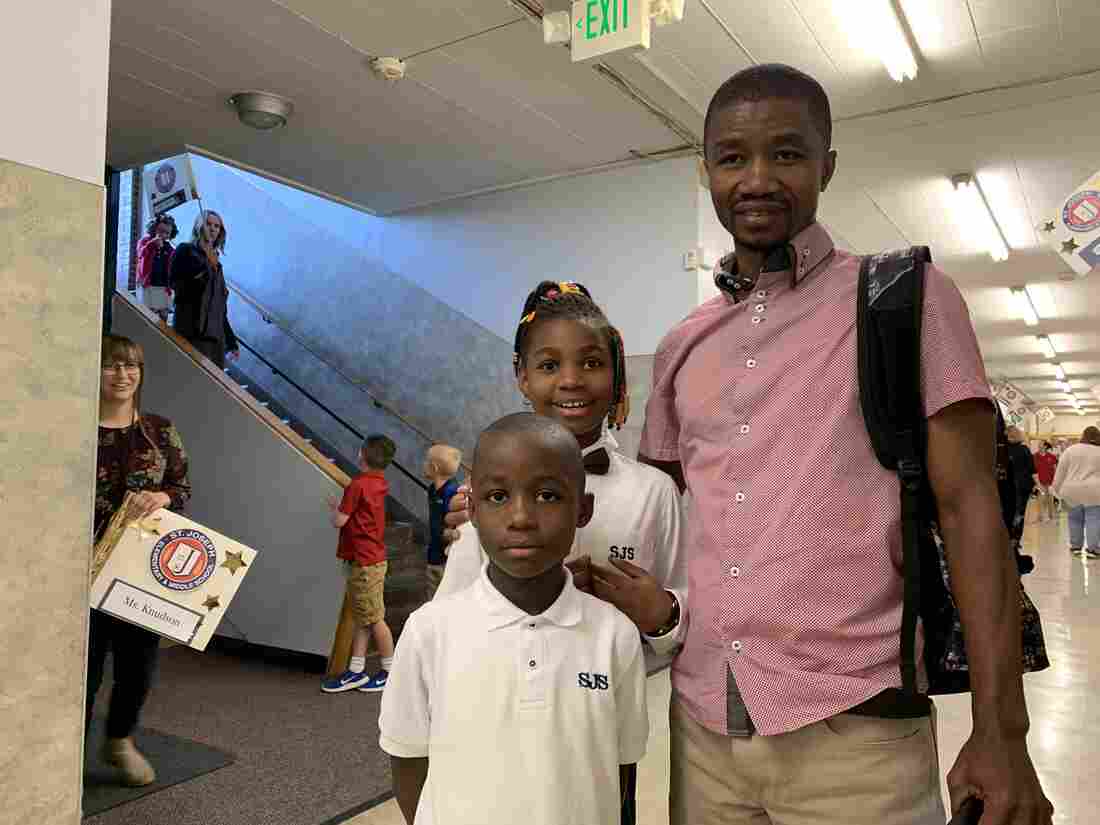 Elongo Gabriel, a refugee from the Democratic Republic of the Congo, drops his kids off on the first day of school at St. Joseph's Elementary in Missoula, Mont. He is one of 330 refugees to be resettled since 2016 in the college town of 75,000 people. Kirk Siegler/NPR hide caption 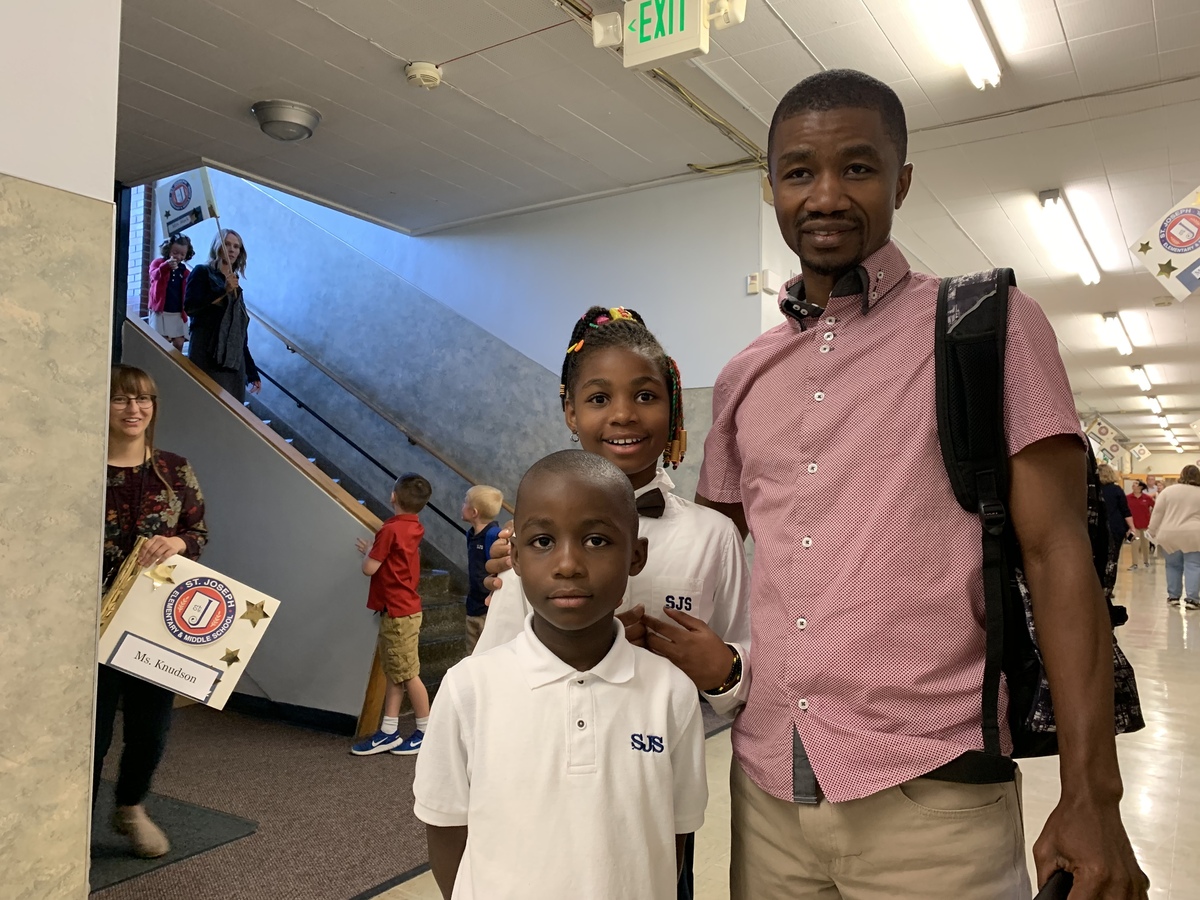 Elongo Gabriel, a refugee from the Democratic Republic of the Congo, drops his kids off on the first day of school at St. Joseph's Elementary in Missoula, Mont. He is one of 330 refugees to be resettled since 2016 in the college town of 75,000 people.

It's the first day of school in Missoula, Mont., and Elongo Gabriel, a Congolese refugee, is dropping off his young son and two daughters.

A proud father, he has a wide grin. "For me it's like a dream to get a chance for my kids to study here," he says.

Getting here, to a safe place, has been a long and traumatic saga. His family fled war in their home country where Elongo worked for a human rights NGO. They then spent six years in Tanzania in a destitute refugee camp, with little to no schooling available and on most days only cassava to eat.

Finally, in July, after their paperwork went through, they boarded a plane for the first time, flying to Dubai, then Los Angeles, then Montana the next day.

"It was a wonderful day for us," Elongo says. "We cannot forget that day."

Elongo is one of 330 refugees to be resettled since 2016 in Missoula, a college town of 75,000 people ringed by mountains and snow-fed rivers. But his family is also among a dwindling number of refugees approved to come to the U.S. this year. While there's been much attention on migrants and asylum seekers at the U.S.-Mexico border, elsewhere the number of refugees fleeing war and other crisis being allowed into the country is the lowest it's been since 1980.

An advocacy group representing NGO refugee resettlement agencies across the country, the Council recently released a report showing that 51 resettlement programs have closed and another 41 offices have suspended services in 23 states.

For now, Montana's office, run by the International Rescue Committee — one of nine State Department contractors — is open. But these are uncertain times, says director Jen Barile. Under new Trump administration rules, the office has to resettle at least 100 refugees a year to keep federal funding. They'll hit that mark this year, but next year is up in the air, especially if the annual cap were to go zero.

Barile, a longtime social worker in the city, says refugee resettlement is popular and working well here and across rural America. For one, there are a lot of available jobs right now. And she says in smaller towns like this people watch out for each other.

"A lot of the families tell us that they get so much more support here in Missoula than their family or friends in larger cities where the community or the staff don't have as much time to devote to them," Barile says.

Missoula is known as Montana's more cosmopolitan liberal enclave. But like much of the rest of Montana, it's not diverse. Its population is more than 90% white.

"Coming to a place where you're going to see mostly white faces is hard," Barile says.

Winters are also long and cold. The nearest African grocery store is a seven-hour drive away in Seattle. And housing is expensive. But there have been some early success stories, according to advocates, in the years since city leaders first approached the State Department about restarting a local resettlement program that had been shuttered since the 1990s. 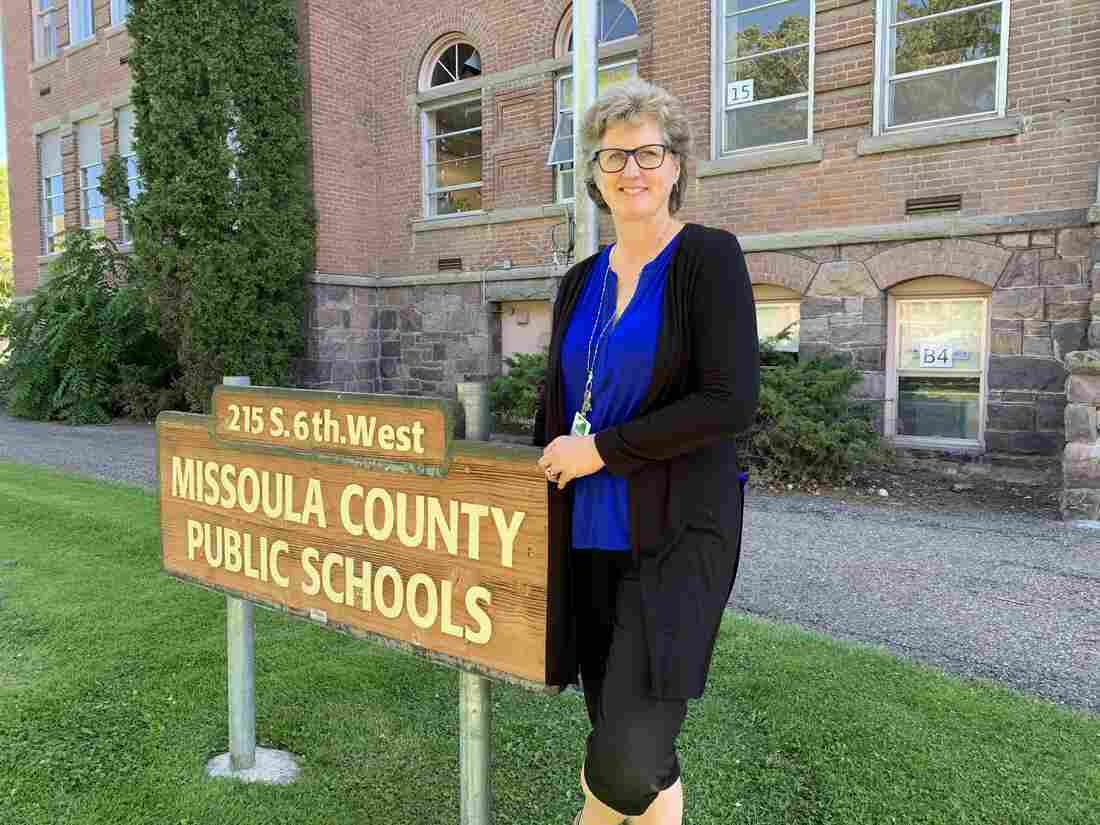 Shirley Lindberg, the English Language Learner Coordinator for Missoula County Public Schools, says only 1.5% of the district is ELL students, and among those, almost half are refugees from Africa and the Middle East. Kirk Siegler/NPR hide caption 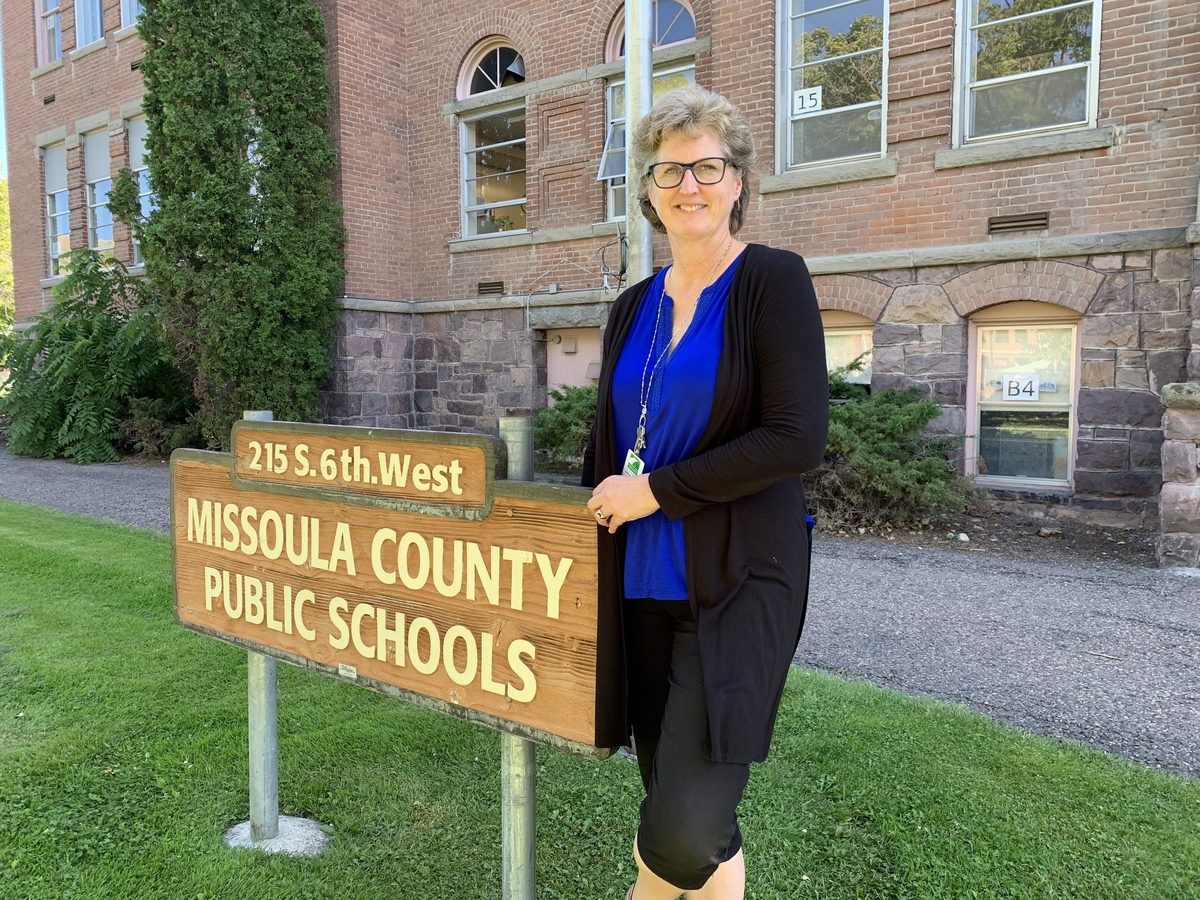 Shirley Lindberg, the English Language Learner Coordinator for Missoula County Public Schools, says only 1.5% of the district is ELL students, and among those, almost half are refugees from Africa and the Middle East.

The Congolese community recently opened a church. There's a popular refugee soccer tournament and monthly pop up style "supper clubs" with food cooked by Eritrean and Syrian refugees. And local schools just got grants to support refugee students. Only about 1.5% of the entire school district here is comprised of ELL, or English Language Learners.

"I personally feel like it's our responsibility to help those in need," says Shirley Lindberg, the district's ELL coordinator. "It would break my heart to see it just stop."

Lindberg says since 2016, the district scrambled to train teachers. They hired tutors and interpreters — not an easy task finding people who are fluent in Swahili for example in Montana. Lindberg says she and other staff and many students have "drank in" the culture and language brought by the refugees.

"This has impacted so many people in our community in a positive way," she says. "It's opened up their eyes to other cultures, I have seen so many people changed because they got to work with refugee families."

The farther you travel outside Missoula though, the less likely you are to hear statements like those. The country's rural-urban divide appears to be just as pronounced in Montana as anywhere else.

Toward the end of the Obama administration, when news reports first came about the Missoula office reopening, opposition to refugee resettlement roared in a pair of western Montana counties. The Republican-controlled state legislature also tried to pass a bill that would have banned Islamic Law in the state — Montana's Muslim population is less than 1%. 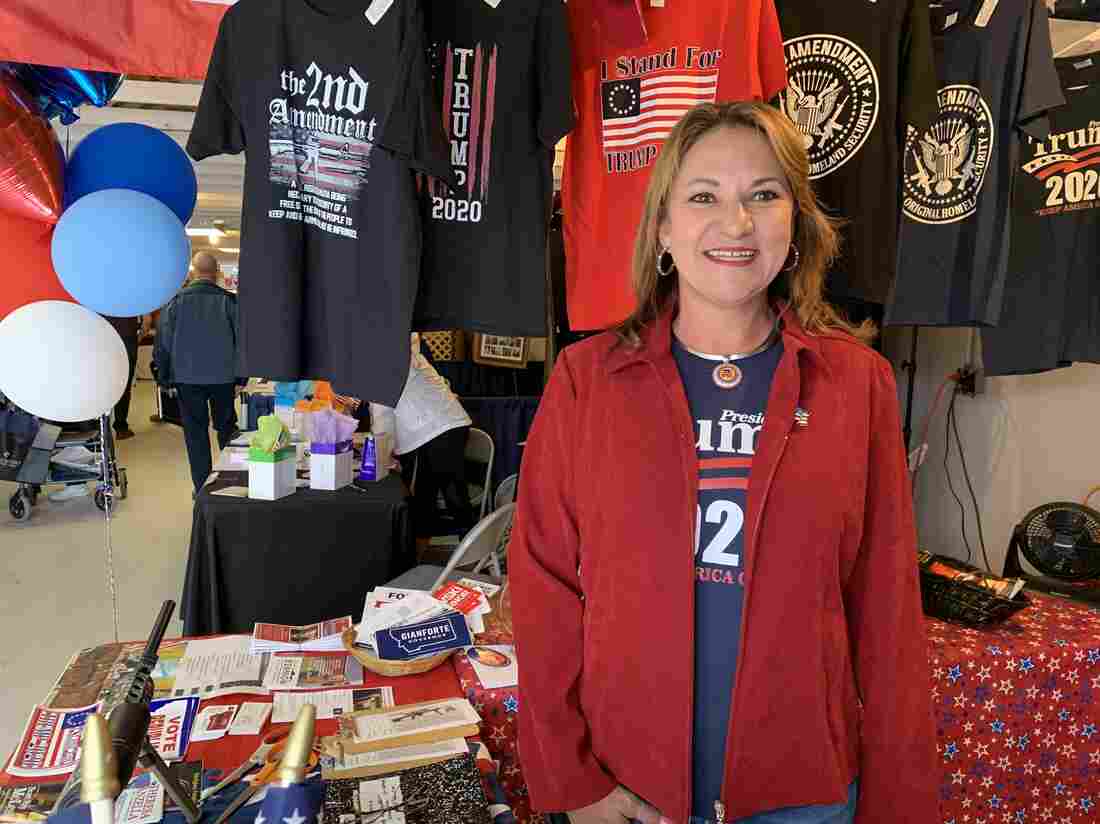 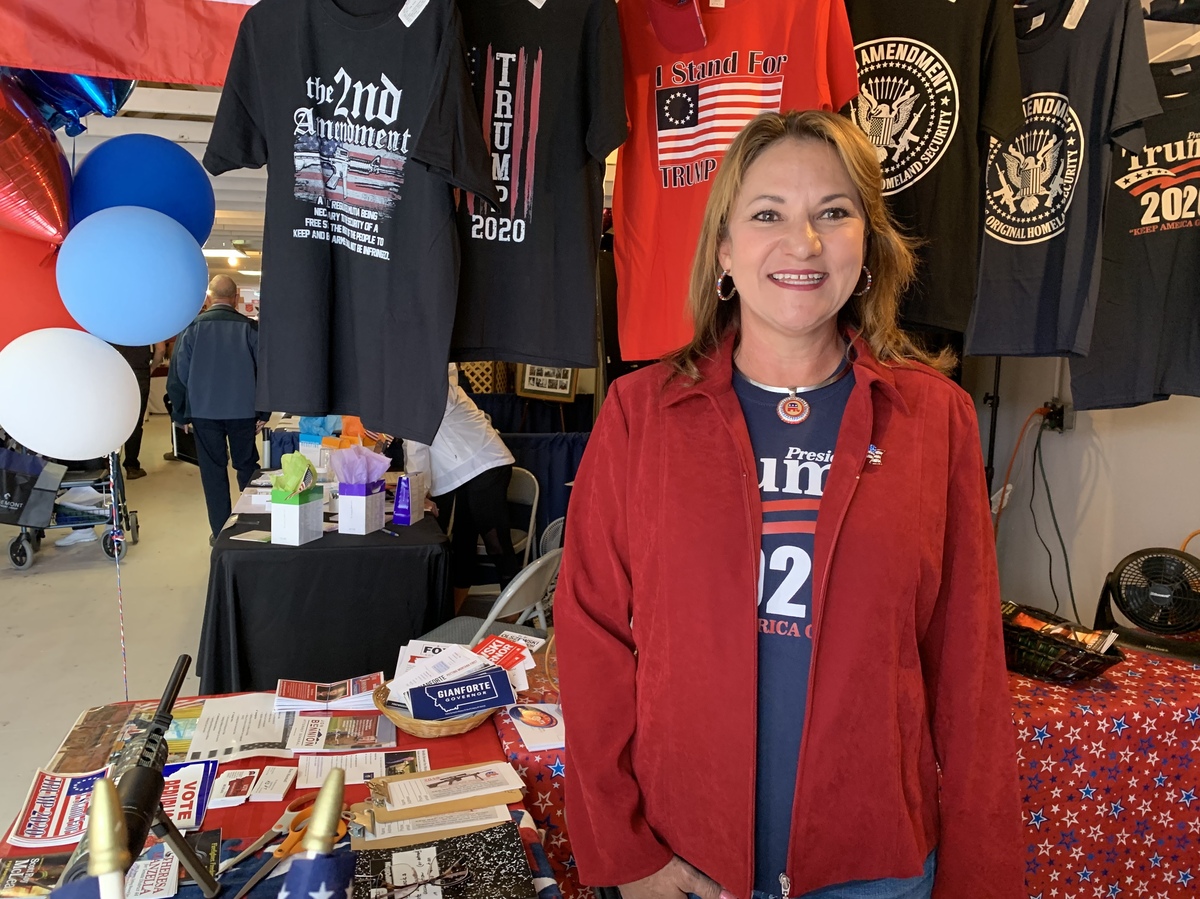 Three years on, at the local fair, just as many people appeared to be wearing red Trump hats as cowboy hats. Once a collection of sleepy farming towns and apple orchards, the Bitterroot has boomed lately with retirees and conservative transplants looking for their slice of Montana.

Manzella is working the local GOP booth, where there's a gun raffle and Trump 2020 stickers and T-shirts for sale. She says the president is doing the right thing by focusing on illegal immigration along the southern U.S. border first. After that's addressed, she says, maybe then the country can revisit letting in refugees or sending more support to them in their own countries.

"People are concerned, people have boundaries and I think appropriate boundaries," Manzella says. "They want to protect their lives, their livelihoods, the lives of their family members."

That kind of nativism President Trump rose to power on often resonates in more rural areas like this, particularly in the northern states that tend to be less diverse.

Ironically though if the Montana resettlement office were to close, refugees who are already here could be left mostly on their own. That would worry people on both sides of the political divide, albeit for very different reasons.

In Missoula, the upheaval in federal refugee policy could upend a community that's just starting to get its footing. Refugees who fled war and famine are now caught in the middle of a much larger national political debate. 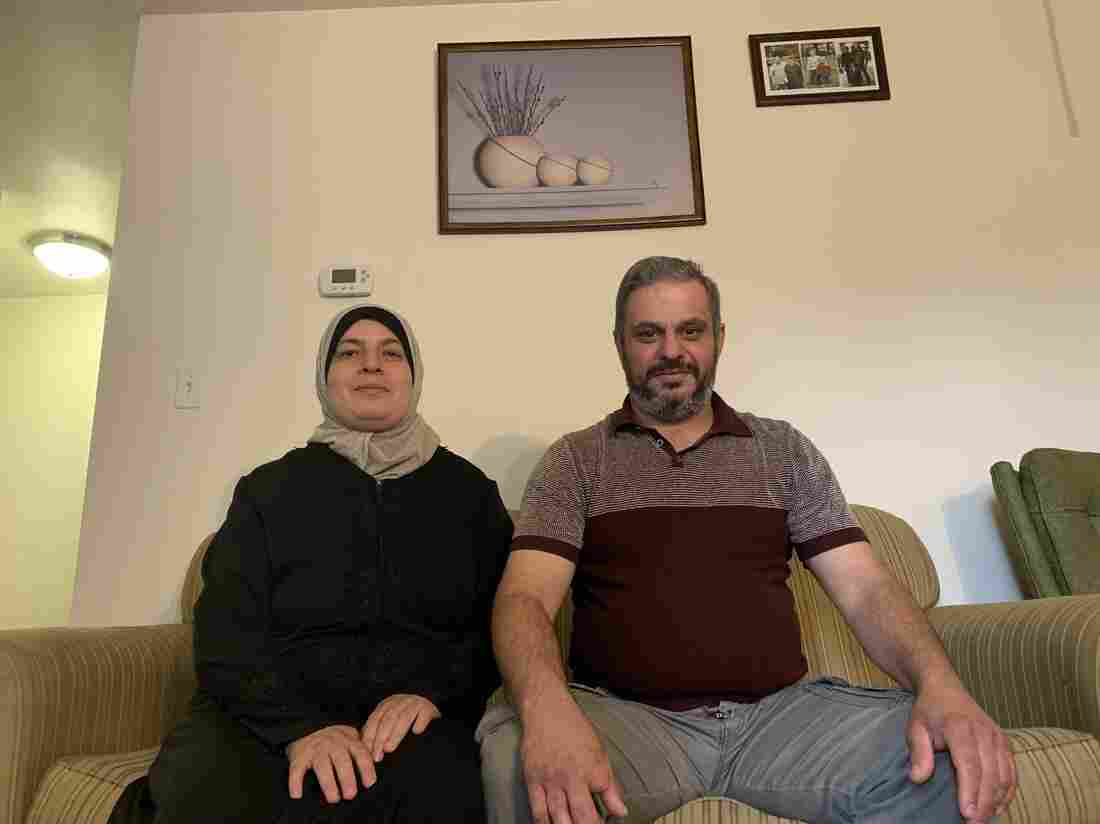 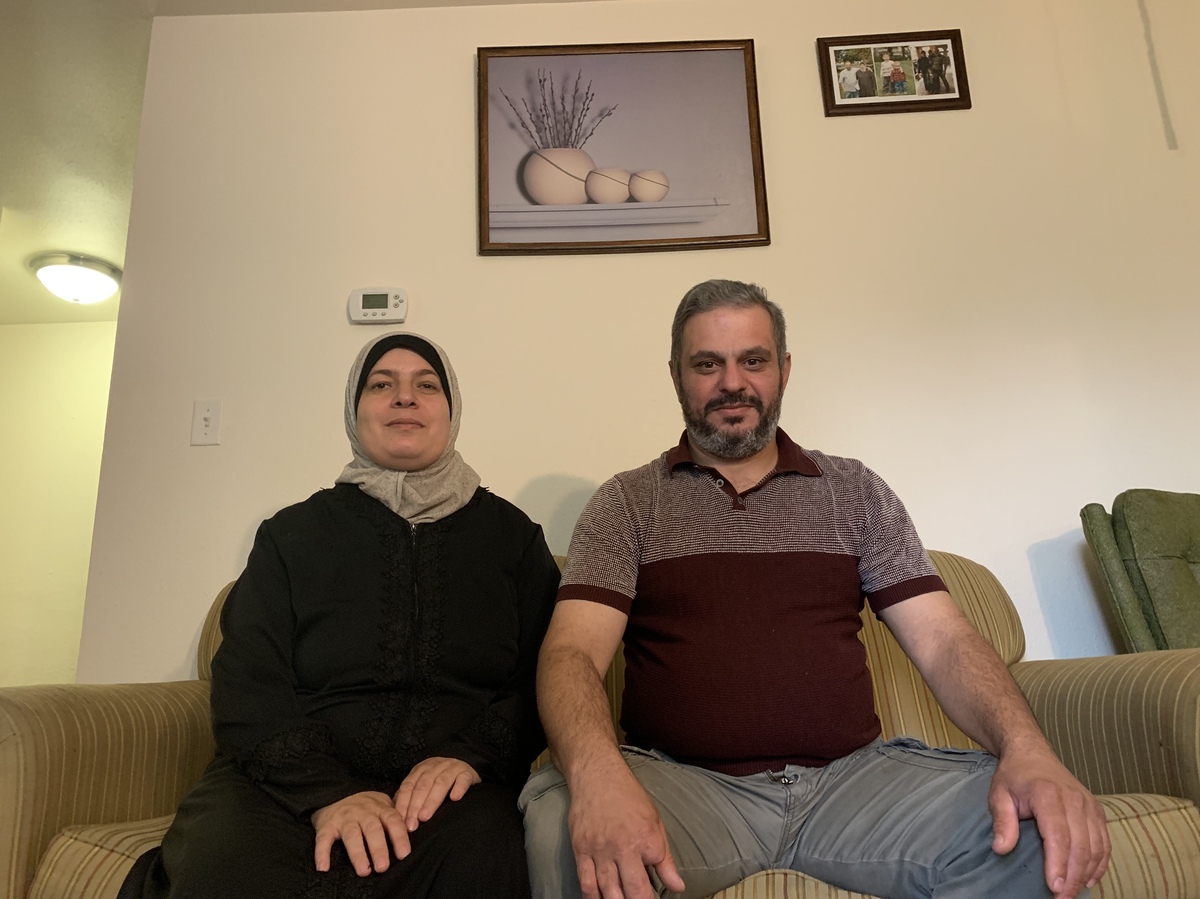 Shatha Abdelber with her husband Mohammed Khalouf in their apartment in Missoula, Mont.

At the apartment she shares with her husband and two young kids, Syrian refugee Shatha Abdelber recounts her story of fleeing her home country's devastating civil war. Her family spent four years living in Jordan before successfully being accepted into the U.S. as refugees two years ago.

Speaking through an interpreter, Abdelber says the community here has been welcoming and she feels much safer. The local resettlement office just started helping her begin the paperwork to try and bring her elderly parents — who are still in Jordan — to the U.S. to reunite the family.

We may not see our family again, Abdelber says in Arabic, our future is uncertain.