Accessibility links
Kaitlyn Dever On The 'Brave And Strong Woman' Behind 'Unbelievable' The actress was last seen starring in the high school comedy Booksmart. But her newest character, on a new Netflix series, is a woman who recants being raped. It's based on a true story. 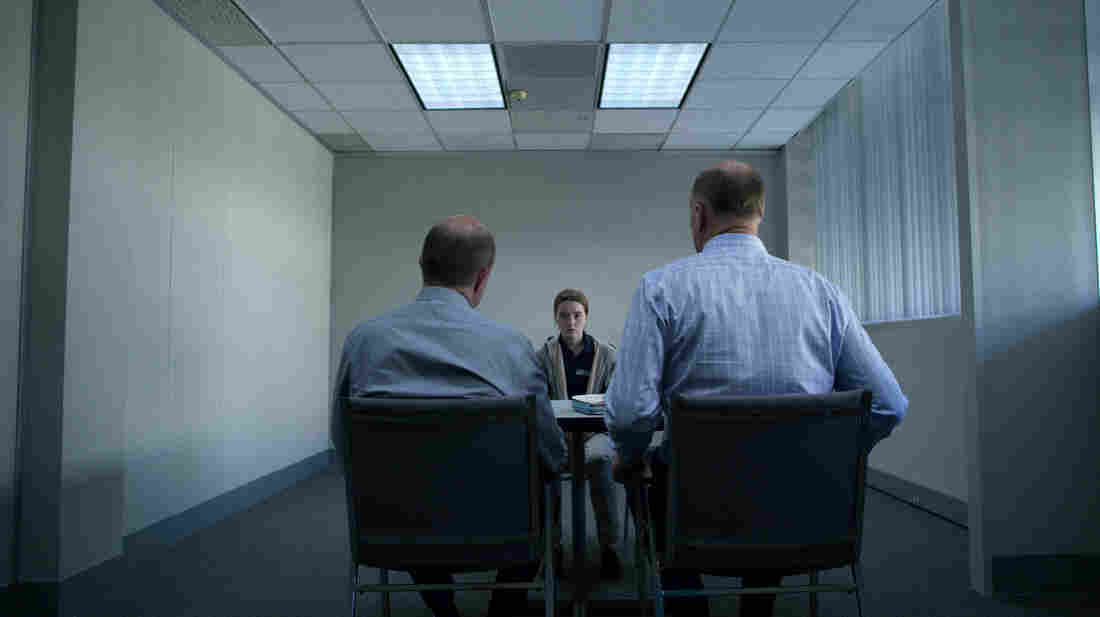 The story behind the new Netflix series Unbelievable was told in the Pulitzer-winning article "An Unbelievable Story of Rape" by T. Christian Miller (ProPublica) and Ken Armstrong (The Marshall Project). Netflix hide caption The story behind the new Netflix series Unbelievable was told in the Pulitzer-winning article "An Unbelievable Story of Rape" by T. Christian Miller (ProPublica) and Ken Armstrong (The Marshall Project).

The new series Unbelievable on Netflix tells the true story of a woman named Marie, who was raped when she was 18.

Instead of investigating the rape, the police investigated her. The man who assaulted Marie went on to rape several more women.

The story was the subject of a blockbuster investigation from ProPublica and The Marshall Project. It won a Pulitzer Prize in 2016.

In the Netflix version, Marie is played by actress Kaitlyn Dever. She took a star turn in the high school romp Booksmart earlier this year, but in Unbelievable, she puts away comedy in favor of an understated, raw performance. There's little dialogue, lots of emotion.

In an interview, Dever said it was the "most challenging project" she'd ever done.

On how she prepared for the role In Unbelievable, Kaitlyn Dever plays a rape victim who recants her story following intimidation by police. The Netflix series is based on a true story. Beth Dubber/Netflix hide caption In Unbelievable, Kaitlyn Dever plays a rape victim who recants her story following intimidation by police. The Netflix series is based on a true story.

What was so important for me, in the process of creating her: I read in all these little [news] clippings I was able to read ... and she referenced this on-and-off switch that she would use when she was in her lowest, lowest point. She could just almost turn it off, like a switch. Knowing that, I knew: OK, this was a very, very brave and strong woman that I'm playing. ...

It's something that I really thought of during and after, 'cause this kind of thing never leaves a person. And while it was very difficult for me to do, shooting-wise — you know, playing this character every day — it doesn't even compare to what these women have gone through in real life.

On any personal experiences she drew on for the role

'Booksmart' Director Olivia Wilde: Teen Movies 'Made Me Excited To Be Young'

On what drew her to Booksmart

On being attracted to roles that represent young women

I feel like as I've gotten older, I do want to really be a part of projects that I know are going to be really important and inspiring for young women. Already, the response that I've been getting from Booksmart has just been so inspiring, and honestly, just reminds me of why I wanted to be an actress in the first place. And the same thing with Unbelievable. ...

I realized this just a couple of weeks ago, that I really can't sit still. And if I were to be myself for the rest of my life, I don't think I could handle it. ... I love being myself in my day-to-day life, but if I had to do it forever, I don't know if I could. I just have this itch to play different people, and say other people's words, and shedding light on stories that were never heard. Like with Booksmart — I'm playing a queer girl in a leading role of this movie, Booksmart, and the reactions I got playing that role was so inspiring to me. I had girls coming up to me saying: Being a queer woman, growing up, I had to seek out representation at small, small, indie theaters. And now I got to play a girl like Amy, and that role was seen on many screens all across the world. ... That to me is really, really inspiring, and I want to continue to be a part of projects that really move the needle forward in that way.

Hanna Bolaños and Jolie Myers produced and edited this interview for broadcast. Patrick Jarenwattananon adapted it for the Web.