Accessibility links
Book Review: 'The Accusation' Tracks The False Narrative Of Blood Libel Edward Berenson looks at what led up to the false narrative that Jewish people murder Christian children and use their blood, its perpetuation, and the single 1928 U.S. allegation of blood libel.

'The Accusation' Tracks The False Narrative Of Blood Libel

'The Accusation' Tracks The False Narrative Of Blood Libel 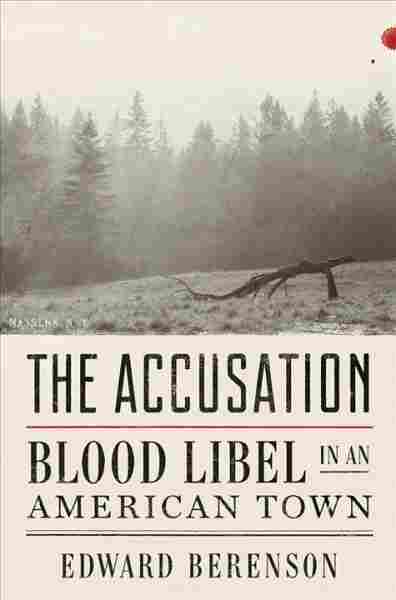 Blood Libel in an American Town

I don't remember when I first heard the false narrative according to which Jewish people murder Christian children and use their blood to bake matzo — but it always registered with me as a bit of a joke. Ridiculous, I thought. Surely no one could have ever believed that, not really.

I had the luxury of this attitude because everyone in my community was Jewish, because I was part of a majority that held power — in other words, my experience was one that, historically speaking, has been vanishingly rare for Jewish people. In Edward Berenson's new history, The Accusation: Blood Libel in an American Town, he details, among other things, just how long this false narrative of ritual sacrifice has been around, and its continued relevance.

Despite the book's title and blurb, which suggest it might be a historical true crime narrative à la Karen Abbott or Erik Larson, Berenson's book is far more concerned with the history and context of the accusation leveled against Jews for centuries than with the single incident of blood libel that occurred in Massena, N.Y. That event serves as a jumping-off point and culmination, more than anything: In September 1928, a 4-year-old girl disappeared for just over a day, during which time about 300 townspeople came to her parents' aid and began searching for her. Meanwhile, someone — it's unclear who — started a rumor that she had been snatched by the town Jews for ritual slaughter. The rumor was taken seriously enough that despite having no evidence, the police questioned the town's rabbi, which shook him and the small Jewish community enough that they feared a pogrom was imminent.

Most of the book, however, is concerned with the context leading up to this event. Berenson explores the earliest documented cases in which Jews were accused of some form of ritual violence, with the first known blood libel accusation occurring in Fulda, a town in Germany: "On Christmas Day in 1235, five Christian boys died in a fire, and the local Jews were accused of killing them to harvest their blood. Three days later, thirty-four Jews were tortured and killed in retaliation."

Why, though? Why blood, why Jews? There is no single answer, the accusation becoming cemented because of a confluence of events, repetition across generations, and the fact that passing around the blood libel rumor was surely more interesting and dramatic than telling of their exoneration after the fact (not that the official declaration of their innocence necessarily spared them vigilante violence).

But one of the most interesting points Berenson makes is that the blood libel rose up just as the Catholic Church, in 1215, declared that "transubstantiation was a dogma, a mandatory belief." While plenty of European Christians at the time refused to believe this, Berenson argues that "[o]nce Christian heretics had been suppressed, Jews were left as the ultimate heretics — no Muslims were available locally — and they bore the brunt of the persistent effort to enforce the dogma of transubstantiation."

Berenson is at his best when breaking down the complex factors that had an effect on, and were affected by, this single known blood libel allegation in the U.S. — as he does in the two final chapters of the book, which look at the election of 1928 and the media attention given to the events in Massena after the fact. Elsewhere, as in exploring Massena's economic and social makeup, he gets lost in the weeds at times, spending pages on details that are harder to tie into what seem to be the book's main themes: anti-Semitic rhetoric and actions in Europe and how those shifted and changed in the United States. He concludes that while Jewish people certainly experienced social and economic discrimination in the U.S., especially after the waves of immigration in the late 19th and early 20th centuries, there was a very small amount of violence aimed at them here — particularly if compared with the vitriolic rhetoric about and physical harm done to other marginalized people at the time like African Americans, nonwhite immigrants and Catholics.

As it turned out, the little girl who was said to have been ritually slaughtered had actually just gotten lost in the woods. She spent the night trying to keep warm and sleep, and she was found the next day in a field where two teenagers recognized that she must be the child everyone was looking for — and arranged to have her taken home. Berenson writes optimistically that the "national discussion sparked by the Massena case revealed essentially no public support for the notion, still accepted in interwar Europe, that Jews ritually murdered Christian children." But his epilogue, which discusses the changing but continued violence against Jewish communities in Europe and Canada well after World War II, makes it clear that Massena's Jews were lucky. If the girl hadn't emerged from the woods, if animals had gotten to her or if she had drowned somewhere, who knows what would have happened?