Accessibility links
Explore the Deep-Sea Ecosystems of Whale Falls : Short Wave What happens after a whale dies? Their carcasses, known as "whale falls," provide a sudden, concentrated food source for organisms in the deep sea. Biologist Diva Amon is our guide through whale-fall ecosystems and the unique species that exist on these fallen whales. 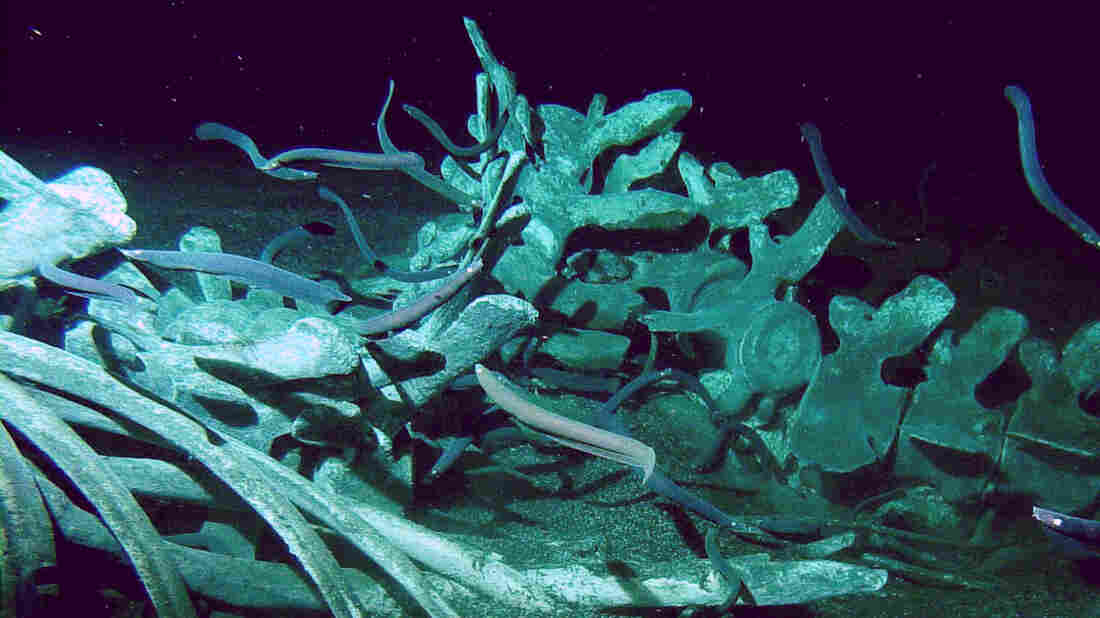 Fallen whale carcasses, abundant in the deep-sea, are now studied as ecosystems unto themselves. Craig Smith and Mike deGruy hide caption 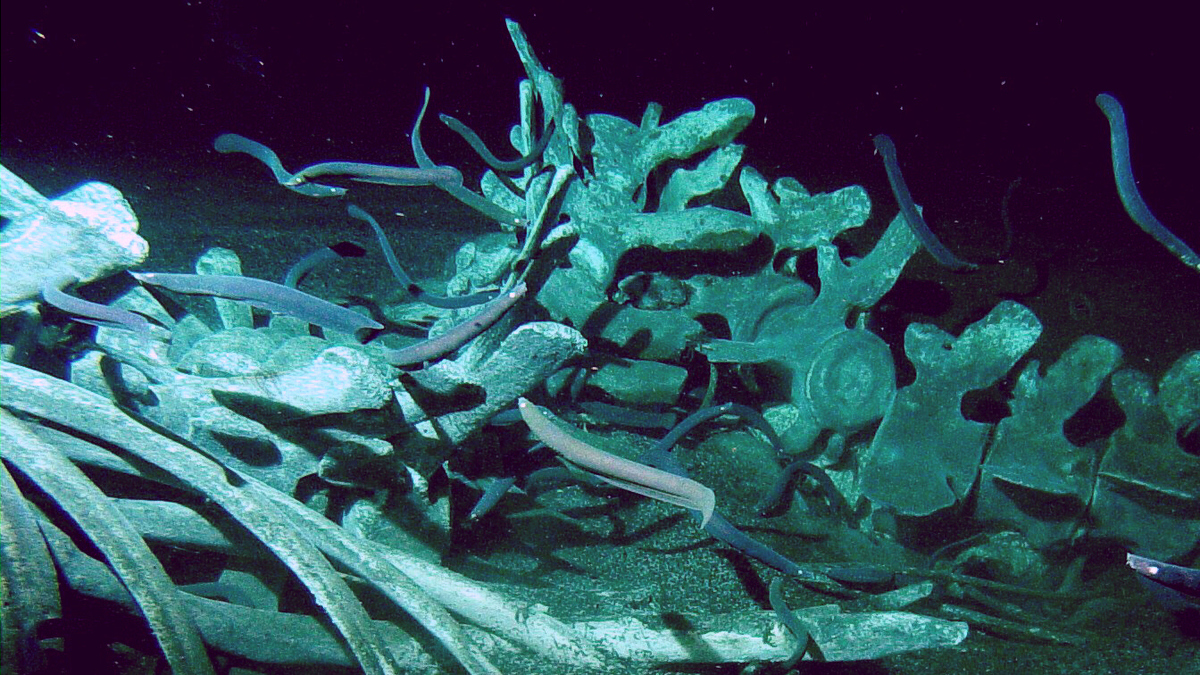 Fallen whale carcasses, abundant in the deep-sea, are now studied as ecosystems unto themselves.

What happens after a whale dies? Most fall.

Their carcasses — known as "whale falls" — become an energy-rich habitat, drawing a wide variety of organisms from across the deep sea to feast. Whale falls become ecosystems unto themselves. Even cooler?

Whale falls are places of evolutionary novelty, sheltering species first discovered on the bones of dead whales. These species have adapted to live in the extreme environment of the deep sea: a cold region of immense pressure and intense darkness.

Down there, most creatures subsist on dead and decaying material that falls from the surface, forming "marine snow" — dead plankton, dead animals shells, fecal matter, and other inorganic material. But every so often, something larger reaches the sea floor.

Diva Amon, a deep-sea biologist and the Marie Skłodowska-Curie Research Fellow at the Natural History Museum in London, likens the arrival of a whale fall to a Thanksgiving buffet.

Whale-fall ecosystems were first studied in 1988 by a team of researchers at the University of Hawaiʻ i, led by Craig Smith. Smith and Amanda Demopoulos later estimated that the sedimentation of a decomposing 40-ton whale carcass can be the equivalent of two thousand years worth of normal background carbon, that falls as marine snow, over a 50 square meter area. In short, a whale fall is a food boon in this typically nutrient-poor region of the ocean.

Scientists access whale falls through a submersible or a remotely operated vehicle (ROV), such as the ones used by the research ship E/V Nautilus. Recently, the vessel live streamed the discovery of a whale fall off central California's coast. The expedition crew was joined by researchers from Monterey Bay National Marine Sanctuary.

Behold, a glimpse of life after death. The skeleton— believed to be a type of baleen whale — was being devoured by eelpouts, octopuses, and polychaete worms.

There are believed to be four stages of ecological succession in a whale-fall ecosystem, with each stage bringing new organisms to the dinner table.

First, Amon said, comes the "mobile-scavenger stage." Organisms in this first wave clean the carcass to the bone.

"Big fish, like sharks and rattails and hagfish, and big crustaceans like Isopods, which are kind of like rolly pollies, and Anthropods, like lobsters, they come from far and wide to feed on the flesh of the whale," she says.

The second is known as the "enrichment-opportunist stage," where smaller organisms comb the surrounding sediment for decomposing tissue.

"You'll get things that are much smaller in size, like little crustaceans or little worms. A lot of things that live in the sediment," Amon says.

The third, known as the self-fulfilling stage, is by far the longest stage in a whale fall community. Bacteria break down fat trapped in the bones, producing hydrogen sulfide as a byproduct of that reaction. Through the process of chemosynthesis, the hydrogen sulfide powers a variety of other bacteria and microbes.

"Again, you get a completely different set of organisms," Amon says. "You get these thick bacterial mats, that grow all over the bones, and are white and yellow and orange and sort of can glow."

During this stage, you'll also find organisms that rely on sulfur-oxidizing bacteria, like chemosynthetic clams, known as Vesicomyids, and bone-eating worms, known as Osedax. The genus Osedax were first discovered living on the bones of a gray whale in 2002. 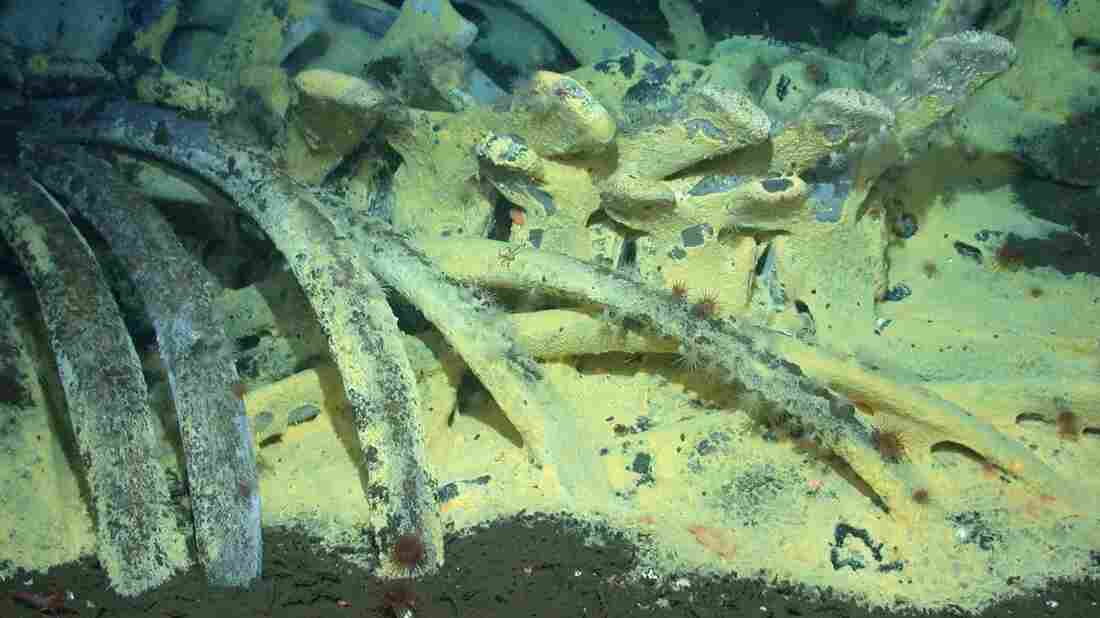 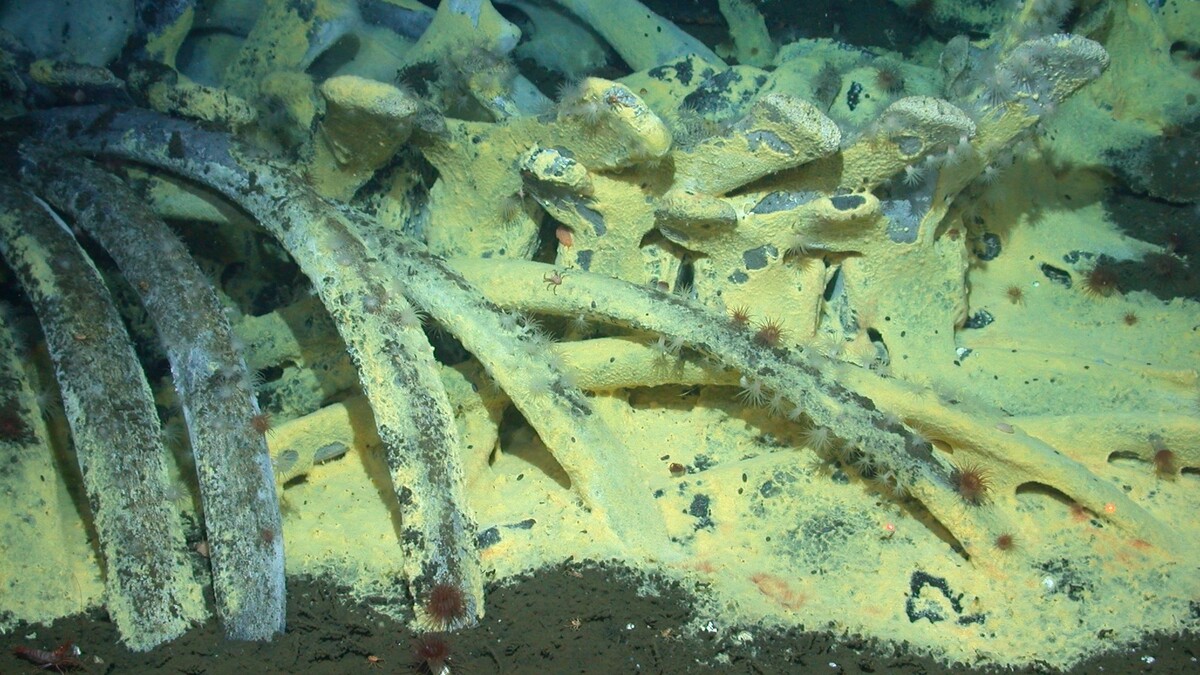 A 30-ton whale in the Santa Cruz Basin covered with chemosynthetic organisms.

Amon grew up in the Caribbean nation of Trinidad and Tobago, sailing the waters and wondering what lurked beneath them.

But the deep sea remains a mystery. According to the National Oceanic and Atmospheric Administration (NOAA), less than 10% of the ocean has been mapped by sonar. Even in the areas studied, scientists don't have a very clear picture of what is unfolding on the sea floor.

"While we know more than we ever have, we still have so many questions," Amon says. "Understanding the importance of many of these habitats in the deep sea, such as whale falls, is still new and emerging. There could be reasons that we need them around, that we don't yet know."

The audio version of this story was produced by Brit Hanson and edited by Viet Le.