Accessibility links
'Don't You Forget About Me' Review: Mhairi McFarlane's Endearing Romance Mhairi McFarlane's latest follows the unfortunate, aimless Georgina as she deals with her father's death, a bad boyfriend and a worse job — until her first love unexpectedly walks back into her life. 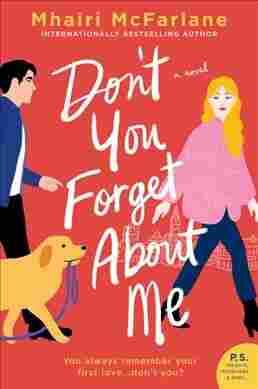 Don't You Forget About Me

Title
Don't You Forget About Me
Author
Mhairi McFarlane

Don't You Forget About Me is a deep dive into memory — specifically, what the main character, Georgina Horspool, chooses to remember and decides to forget, and how secrets buried in those memories can ravage a young woman's self-esteem and lead her to misjudge those who care about her the most.

But Mhairi McFarlane's fifth novel has plenty of laugh-out-loud scenes, too, and she consistently serves up a heaping plate of humor alongside each bowl of angst. Georgina's story is a delightful yet cautionary tale about the misadventures of a willful, insecure, 30-year-old who feels she needs to "make something of herself." But the obstacles in her path are piled so high, she might need a fleet of trucks to clear the way.

Georgina is a character we root for — she's bouncing back from one of the worst boyfriends in history, she sorely misses her late dad, and she's got an infectiously likable, imperfect circle of friends and family. And McFarlane does not shy away from putting her through the wringer: There's heartbreak, tragedy, laugh-out-loud self-deprecation, and heartfelt silliness. Between Georgina's surprising voice and the way she sees her world, I was hooked from the first, captivating chapter.

Indeed, something about the flavor of McFarlane's writing reminded me of the feistiness and humor of the TV show The Marvelous Mrs. Maisel. Of course, Georgina is strictly a Sheffield lass, and not from the Upper West Side of Manhattan. But both the book and the show feature tightly written dialogue, a female-centered story that involves past and present loves, and a woman's hunger to stand in front of an audience and tell her story.

When the book begins, 18-year-old Georgina is falling in love for the first time with the wonderfully written, inky-haired Lucas McCarthy. They are drawn to each other during a class discussion on Emile Brontë's Wuthering Heights. And in my world, that's the perfect backdrop for a first meeting! Their mutual love is a study in restrained passion, tenderness, and all of the obligatory mistakes of youth. But after a shaky prom night, the reader is left in I-wonder-what-really-happened-limbo as we flash to Georgina at 30.

Present-day Georgina lacks self-confidence, a boyfriend she can trust, and a family that doesn't think of her as a tosser. (By the way, that means loser. I got carried away by the very Britishness of the story.)

Interestingly, we see her family's point: Her father's sudden death left her in a tailspin, so much so that she didn't finish university. Now, she's single, and a waitress at the world's worst restaurant. That's Amore! is a monumentally lousy faux-Italian eatery with a head chef who can't cook a lick — and some of the scenes there were so over-the-top they felt better suited to a sitcom. But mostly, Georgina's trials and tribulations are as funny as they were heart-breaking.

Between Georgina's surprising voice and the way she sees her world, I was hooked from the first, captivating chapter.

McFarlane's zippy pacing slows with the recurring appearances of the aforementioned bad boyfriend, Robin. But he has such a big impact on the way Georgina makes decisions that — I guess — he's a necessary evil for her to learn from.

The secrets about the last night Georgina spent with Lucas in high school, and the last time she spoke with her father are the root of who she is today (and show the woman she needs to become). McFarlane holds those secrets close, letting them play out through the book, but I appreciate it when the romance is hard-won. It makes the struggle a page-turner, the reward of Lucas and Georgina's story (finally!) much sweeter.

I also didn't mind the resemblance to some of the British films I've enjoyed — classic rom-coms like Bridget Jones' Diary, Four Weddings and a Funeral, and Notting Hill, that have plenty of drama alongside the laughs.

And that's what you'll find reading Don't You Forget About Me -- a page-turner about a heroine with a laugh-out-loud voice, an endearing romance, and, as the British say, lashings of drama. And I won't forget Georgina Horspool's secrets anytime soon.

Denny S. Bryce writes historical fiction and urban fantasy. Her first novel, Wild Women and the Blues, is set for release in January 2021. You can follow her on Twitter: @dennysbryce.