Accessibility links
Houthi Drone Strikes Disrupt Almost Half Of Saudi Oil Exports The attacks on oil facilities by the Iran-backed Yemeni rebels sent large plumes of smoke into the air, the trails visible from space, and impacted an estimated production of 5 million barrels a day. 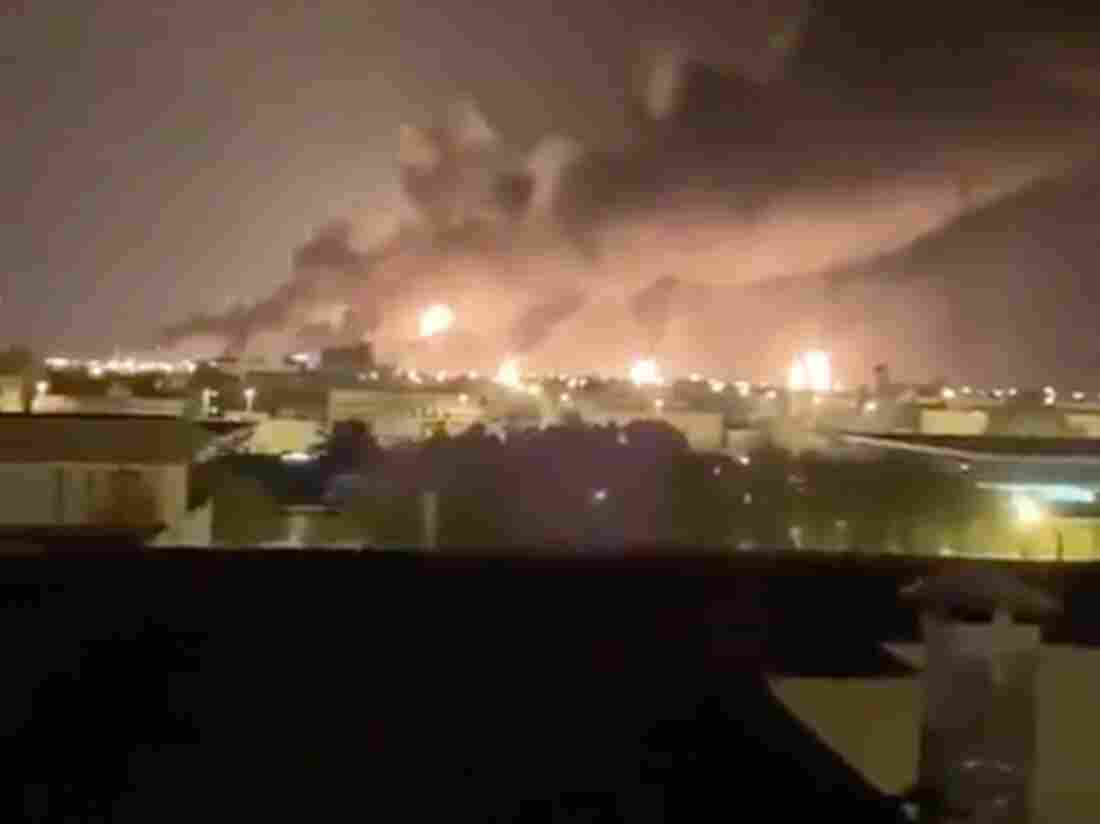 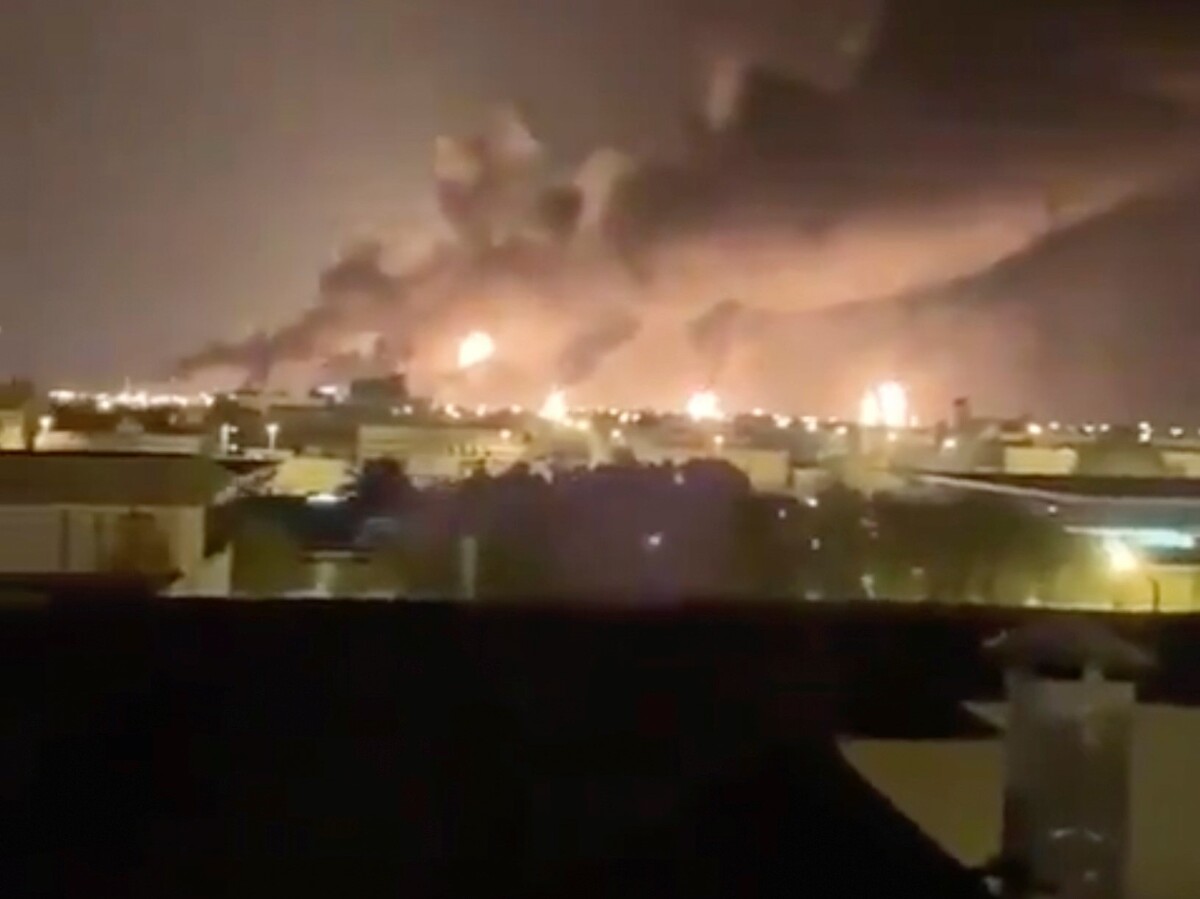 Smoke fills the sky at the Abqaiq oil processing facility on Saturday in Saudi Arabia.

Yemen's Houthi rebels have claimed responsibility for drone strikes on two Saudi Aramco oil facilities early Saturday, according to a statement by a Houthi spokesman.

Reuters and The Wall Street Journal report that about half of the country's oil production has been disrupted, or 5 million barrels a day. Saudi Arabia produces approximately one-tenth of the world's crude oil, but for now, the impact on global oil prices is unknown, as markets are closed for the weekend.

According to the website of Al-Masirah, a Houthi-run satellite news channel, spokesman Yahya Saree vowed additional attacks if Saudi coalition forces did not withdraw from Yemen.

Saudi Arabia's Interior Ministry confirmed the strikes on the oil-processing facility in Abqaiq and an oil field in Khurais, both owned by state-owned Saudi Aramco. Abqaiq is about 230 miles away from the Saudi capital of Riyadh, and the field in Khurais is 100 miles away.

According to Aramco's website, the facility in Abqaiq is both the company's largest oil processing facility and the largest crude oil stabilization plant in the world, playing a "pivotal role" in the company's operations.

Bob Tippee, editor of the trade publication Oil and Gas Journal, said that the facility in Abqaiq held light crude oil as opposed to heavy crude oil, which requires more intense refining to remove sulfur and other impurities. He said that factories that are built to refine only light crude oil may not be able to find another crude exporter to fill the gap during the disruption.

"If the light crude that's been disrupted cannot be replaced with light crude of similar grade and similar quality immediately, which it probably cannot, there will be some problems in the market," Tippee said.

The attack also throws into question a rumored initial public offering of 5% of Aramco's stock, for which the company had hired nine banks, including JPMorgan Chase & Co and Morgan Stanley, Reuters reported. Tippee said the offering, which is expected to raise $100 billion, is part of Crown Prince Mohammed Bin Salman's Vision 2030 plan to reduce the kingdom's dependence on the price of crude oil.

Videos posted online showed several large fires and plumes of smoke presumably at the Abqaiq facility, as well as the sounds of apparent gunfire in the area surrounding the plant. The Saudi Press Agency reported that Aramco security had controlled the fires at both facilities. No casualties have been reported. The Abqaiq plant was attacked in 2006 by al-Qaida in a failed suicide bomb attack, NPR reported.

Five Killed, One Held in Connection with Saudi Attack Feb. 27, 2006

Houthi rebels, partnered with Iran, have clashed with a Saudi-led coalition since March 2015, after the rebels ousted Yemeni President Abdrabbuh Mansur Hadi in January of that year. The Houthi rebels now control large parts of northern Yemen and have launched similar strikes on oil facilities and airports in Saudi Arabia this year. A cease-fire between the Houthis and Saudi-backed government forces was agreed to in December, but has not held.

The Saudi coalition is bolstered in part by the United States, through logistics and intelligence support, as well as weapons sales and aerial refueling.

In the aftermath of Saturday's drone strikes, President Trump spoke with Saudi Crown Prince Mohammad Bin Salman "to offer his support for Saudi Arabia's self-defense," the White House said in a statement. "The United States strongly condemns today's attack on critical energy infrastructure. Violent actions against civilian areas and infrastructure vital to the global economy only deepen conflict and mistrust," the statement read.

In a separate statement on Twitter, Secretary of State Mike Pompeo blamed the attack on Iran and accused the nation's president, Hassan Rouhani, and Foreign Affairs Minister Mohammad Javad Zarif of duplicity.

"Tehran is behind nearly 100 attacks on Saudi Arabia while Rouhani and Zarif pretend to engage in diplomacy. Amid all the calls for de-escalation, Iran has now launched an unprecedented attack on the world's energy supply. There is no evidence the attacks came from Yemen."

The war in Yemen has strained relations between Congress and Trump, after Trump vetoed a bipartisan bill that would have ceased U.S. involvement in the coalition by invoking the 1973 War Powers Act. A measure to override the veto failed by 14 votes.

The political clash came after the October 2018 dismemberment of journalist Jamal Khashoggi at the Saudi Consulate in Istanbul, which the Senate blamed on Crown Prince Mohammed bin Salman in another resolution introduced in December 2018. The Trump administration has declined to confirm or deny a CIA report concluding that the crown prince had ordered Khashoggi's assassination, and vetoed resolutions to halt the sale of arms to Saudi Arabia in July.

Tehran's support for the Houthi rebels could escalate the confrontation between the U.S. and Iran over the 2015 nuclear deal, which Trump pulled out of in 2018. Immediately after the withdrawal, the U.S. put in place a campaign of "maximum pressure," blocking most of Iran's crucial oil exports. NPR reported that the July seizure of an Iranian oil tanker by British authorities in Gibraltar sparked an international diplomatic crisis, as the U.S. pushed to keep the ship detained under suspicion that it was headed to supply Syria. The ship was eventually released.

Andrew Murrison, a British foreign affairs minister with oversight of the Middle East, tweeted that "the Houthis must stop undermining Saudi Arabia's security by threatening civilian areas and commercial infrastructure."