Accessibility links
Book Review: 'The Divers' Game,' By Jesse Ball In author Jesse Ball's universe, which runs too closely parallel to our own, human worth has been reduced, negated, argued out of existence. But it has left an echo, one with a haunting symphony. 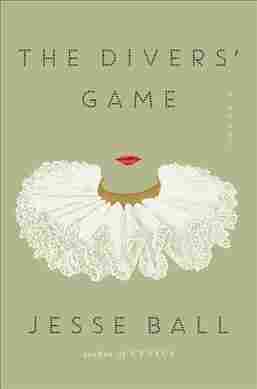 Dystopian stories are, in essence, thought experiments. And few come as thoughtful as The Divers' Game.

The latest novel from acclaimed author Jesse Ball depicts a world both unimaginably unjust and all too believably cruel: Society has been split into two distinct halves, the pats and the quads, with the former group given unchecked supremacy over the second. It isn't the most original premise in dystopian fiction, but Ball clearly isn't trying to reinvent any genre tropes. Rather, he's plumbing the depths of a familiar conceit, attacking it from a fresh angle, and constructing a parable that's jarring in its subtle complexity and profound, horrific revelation.

Lethe and Lois are teenaged schoolchildren who are lucky enough to have been born pats. As such, they're legally allowed to murder any quad — using poison gas; pats are issued gas masks — for any reason they see fit. The Divers' Game is split into three sections, and the first part of the triptych involves Lethe's and Lois' class trip to a zoo. There, the divide between living and dead animals in cages becomes a springboard for a stinging disquisition on their society's cold calculus. Ball writes like a man swept up in this inhumane social order, enraptured by its casual barbarism; he pens bloodcurdling hymns and anthems that reinforce the caste system, sung by Lethe's and Lois' class — and their ultimate capitulation to the idea that individuals must contort themselves to accommodate society is heart-stopping in its adolescent innocence. "That is the direction of society: forward," Ball writes. "All those who try to send it back are ground beneath the wheels. Hasn't it always been so?"

What separates the pats from the quads, the author calmly reveals, is their status as citizens — specifically, whether they are recent refugees and immigrants or descended from such. Quads are segregated into ghettos and marked with tattoos of red hats on their cheeks, forever branded as expendable. "Things done to those beneath," he writes, "are not properly violence."

Ball's bombshell is undisguised and unapologetic: He's taking dead aim at current U.S. policy in regard to immigration and the detention of asylum-seekers, and the repercussions he speculates upon leave no doubt as to his standpoint on the topic — even as he expresses them in nested sequence of vicious satire. But his series of modest proposals culminates in the second section of the book, in which the titular's divers' game is unveiled. It's a game played by quad children, and it's as much of a Shirley Jackson-esque premise as it is an exquisite probe of liminal zones and psychogeography between the privileged and the oppressed.

While Ball steers clear of — or compellingly doubles down on — some of the clichés of dystopian fiction, he falls prey to one of the worst: the ungainly infodump. A huge, clumsy chunk of exposition about his world is heaped on the reader early on in the book, in the form of a lecture delivered by Mandred, Lethe's and Lois' teacher. It's hard not to feel lectured to as you read it. Once that's out of the way, however, The Divers' Game barrels forward in a cascade of quiet suspense and eerie worldbuilding, not to mention Ball's many observations about the frailties of truth, compassion, and unity. His world is built on lies, violence, and conformity, as well as the denial of all three. As he puts it:

"We are all just desperate to have more of what's nice, and we'll say anything to get it. We'll do anything, be anything, say anything, just in order to reach the world that we believe in."

What's most chilling is the fact that he writes this not from a place of condemnation, but one of euphoric acceptance.

The third and final section of The Divers' Game throws a hard left hook. It's a letter written to Mandred by his wife, one that's both a confession and a farewell. "What is it to kill a person?" she asks, not entirely rhetorically. "Something more than speaking out loud, and something less than being born. Something like knowledge, yet less, a knowledge that leaves you with less." In Ball's universe, one that runs too closely parallel to our own, the worth of human life has been reduced, negated, argued out of existence. But it's left an echo, and from that echo he builds a haunting symphony. If dystopian stories serve as thought experiments, the best ones also function as heart experiments. And with The Divers' Game, Jesse Ball has unsettlingly accomplished both.