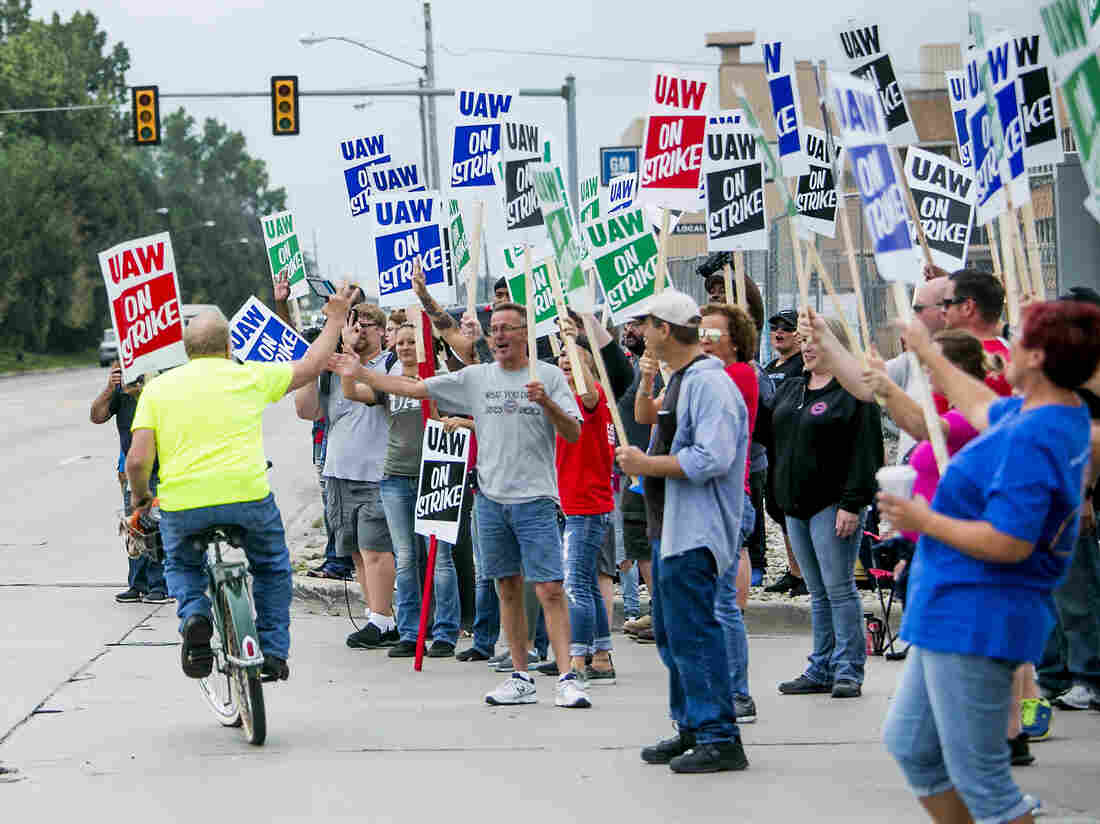 Demonstrators wave at a cyclist riding past during a United Auto Workers strike outside the General Motors Co. Flint Assembly plant in Flint, Mich., on Monday. Bloomberg via Getty Images hide caption 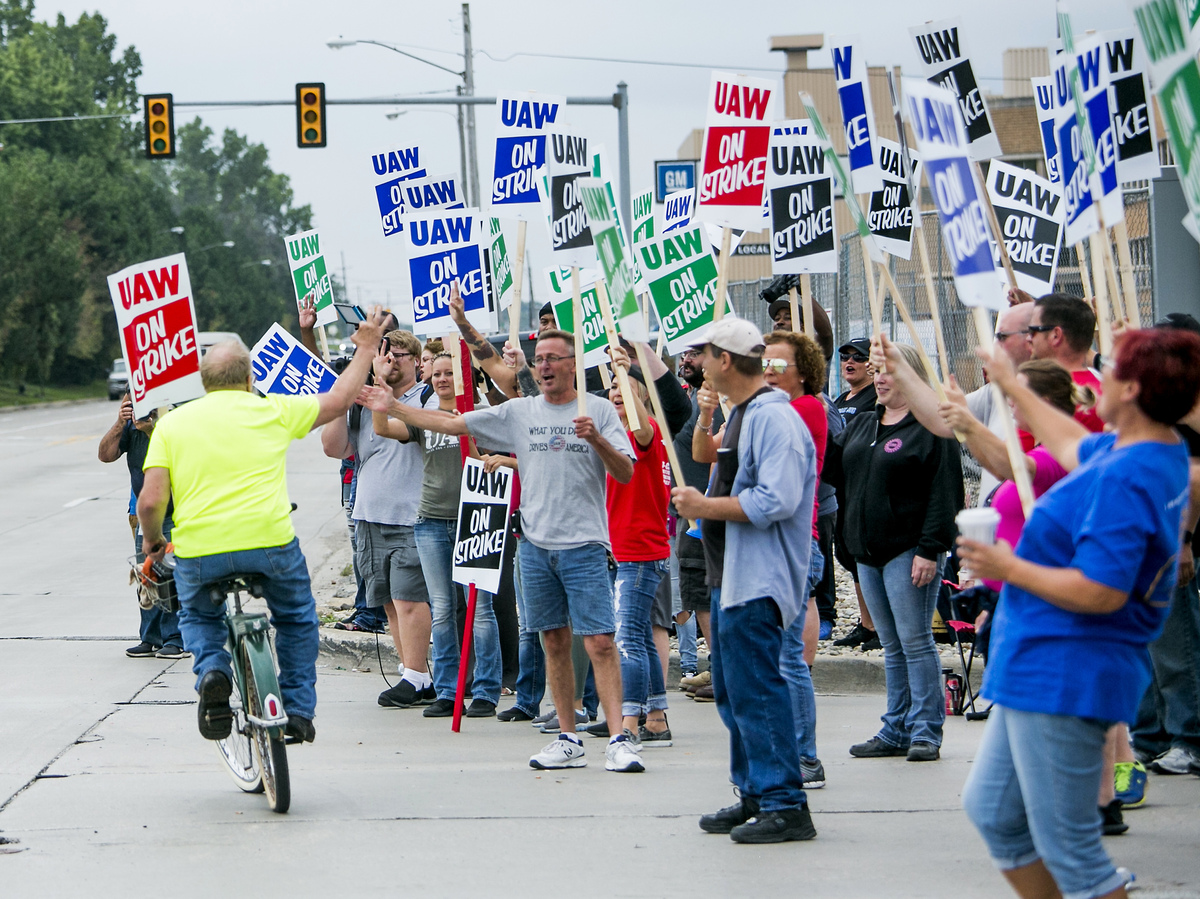 Demonstrators wave at a cyclist riding past during a United Auto Workers strike outside the General Motors Co. Flint Assembly plant in Flint, Mich., on Monday.

Talks between General Motors and union officials representing tens of thousands of striking autoworkers restarted Monday in hopes of driving both sides to an agreement on issues including workers' wages, health care and profit-sharing.

"If you're serious about negotiating a contract, you don't throw something out an hour and a half before the deadline," Rothenberg said, referring to an eleventh-hour effort by GM to offer some concessions before the strike went into effect just before midnight Sunday.

Rothenberg adds that only 2% of the contract terms have been agreed upon, and from his perspective it does not look as though both sides will come to a quick resolution.

GM confirms it offered pay raises and other items totaling $7 billion on Sunday, but it wasn't enough to prevent the strike from going into effect.

"Negotiations have resumed. Our goal remains to reach an agreement that builds a stronger future for our employees and our business," the company said in a statement Monday.

Production across the U.S. is expected to be halted until a new contract is hammered out, affecting nearly 50,000 workers at 33 manufacturing plants in nine states as well as 22 parts distribution warehouses.

A pair of business forecasts, one from Credit Suisse and another from RBC Capital Markets, predict GM could lose as much as $50 million for each day of the strike.

Michigan Gov. Gretchen Whitmer, a Democrat, tweeted photos from her meeting with UAW members on the picket line Monday outside the Lansing Grand River plant. She said she was "hopeful" the two sides can reach an agreement quickly.

"Always proud to stand with UAW members fighting for good jobs and fair wages. I'm hopeful the UAW and GM can negotiate and ratify a contract quickly so Michigan's autoworkers can get back on the job as soon as possible, as this is so important to our economy," Whitmer said.

Always proud to stand with UAW members fighting for good jobs and fair wages. I’m hopeful the UAW and GM can negotiate and ratify a contract quickly so Michigan’s autoworkers can get back on the job as soon as possible, as this is so important to our economy. pic.twitter.com/BnVAFIlm9D

Night-shift workers at a plant in Bedford, Ind., that makes transmission castings and other parts shut off their machines and went home, Dave Green, a worker, told The Associated Press.

Green, who transferred from the now-closed GM car factory in Lordstown, Ohio, said: "This is not about us. It's about the future."

The strike is the first against GM since a two-day walkout in 2007.

"They helped save the automaker from bankruptcy in 2009," she says. "They made a lot of concessions, and they feel with GM being as profitable as it is right now, it's time for the company to come back and help them out."

On Saturday, union officials allowed their contract to lapse around midnight. GM leadership has sought to contain the company's health care costs, but union leadership said workers refuse to agree to a contract that makes health care more expensive for them.

"While we are fighting for better wages, affordable quality health care, and job security, GM refuses to put hard working Americans ahead of their record profits," UAW Vice President Terry Dittes said in a statement. "We don't take this lightly."

Officials at GM said in a statement to NPR that the company "presented a strong offer that improves wages, benefits and grows U.S. jobs in substantive ways and it is disappointing that the UAW leadership has chosen to strike."

Kristin Dziczek, vice president of the Center for Automotive Research, an independent research organization, said both sides are looking at the prospect of a weakening economy.

"The company and the union look at the very same set of economic fundamentals and see the same writing on the wall and have different motivations," Dziczek said.

"The company looks at that and says, 'Well, if we hit a downturn, we want to be able to have contingent compensation, so we don't get locked into paying higher costs if the market softens.' That same set of economic facts drives the union to want more guaranteed and certain compensation: base wage increases," she said.

Dziczek said the strike would have to last more than a month to affect inventory at car dealerships. But she said the impact will ripple fast across North America.

"There's great reliance on cross-border trade in engines and transmissions and other parts to support production in Canada and Mexico, so it wouldn't take long before Canada and Mexico were also shut down," she said.

Some of the major sticking points include the cost of health insurance and pay raises demanded by workers. GM made $8.1 billion in profits last year.

GM has announced the closing of four factories and the union has been fighting those decisions. GM says the average hourly employee makes about $90,000 a year. The UAW's Ted Krumm said the union will not make concessions.

"This strike is about us. It's about standing up for fair wages, for affordable, quality health care, for our share of profits and for our job security," Krumm said at a Sunday news conference.

The move to strike comes as legal troubles follow the union. A federal corruption scandal has led to guilty pleas by five people in the UAW. The FBI has raided the home of Gary Jones, the union's current president.

The Detroit News, citing three sources not authorized to discuss the investigation, reported last week that Jones has been identified as a co-conspirator in a criminal complaint against a UAW regional official named Vance Pearson. Jones, according to the News, is the unnamed "UAW Official A."

The newspaper also reports that agents seized $30,000 and a set of Titleist golf clubs from Jones' home and cites a neighbor who said investigators took "wads" of money from Jones' garage in a raid Aug. 28.

Some autoworkers have called on Jones to step down amid the probe, in which some union officials are accused of hiding bribes and embezzling money from the union.