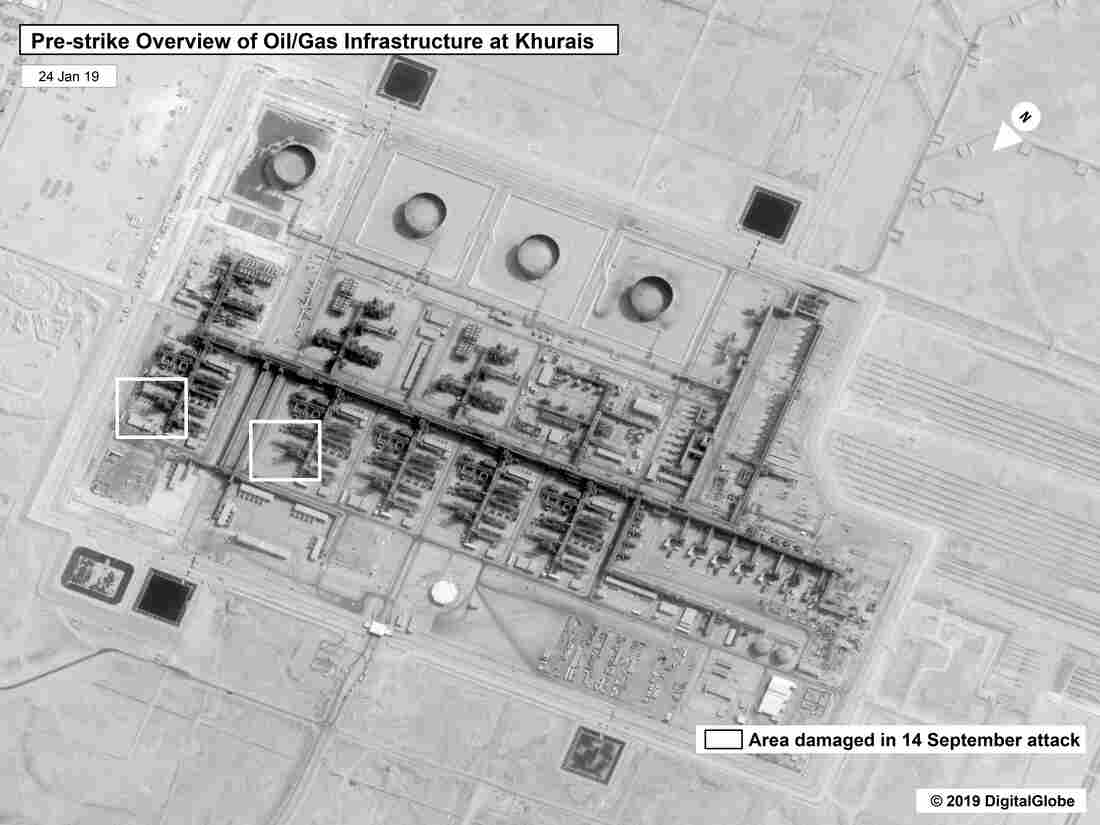 This image provided on Sunday by the U.S. government and DigitalGlobe and annotated by the source, shows a prestrike overview at Saudi Aramco's Khurais oil field in Buqayq, Saudi Arabia. U.S. government/Digital Globe via AP hide caption 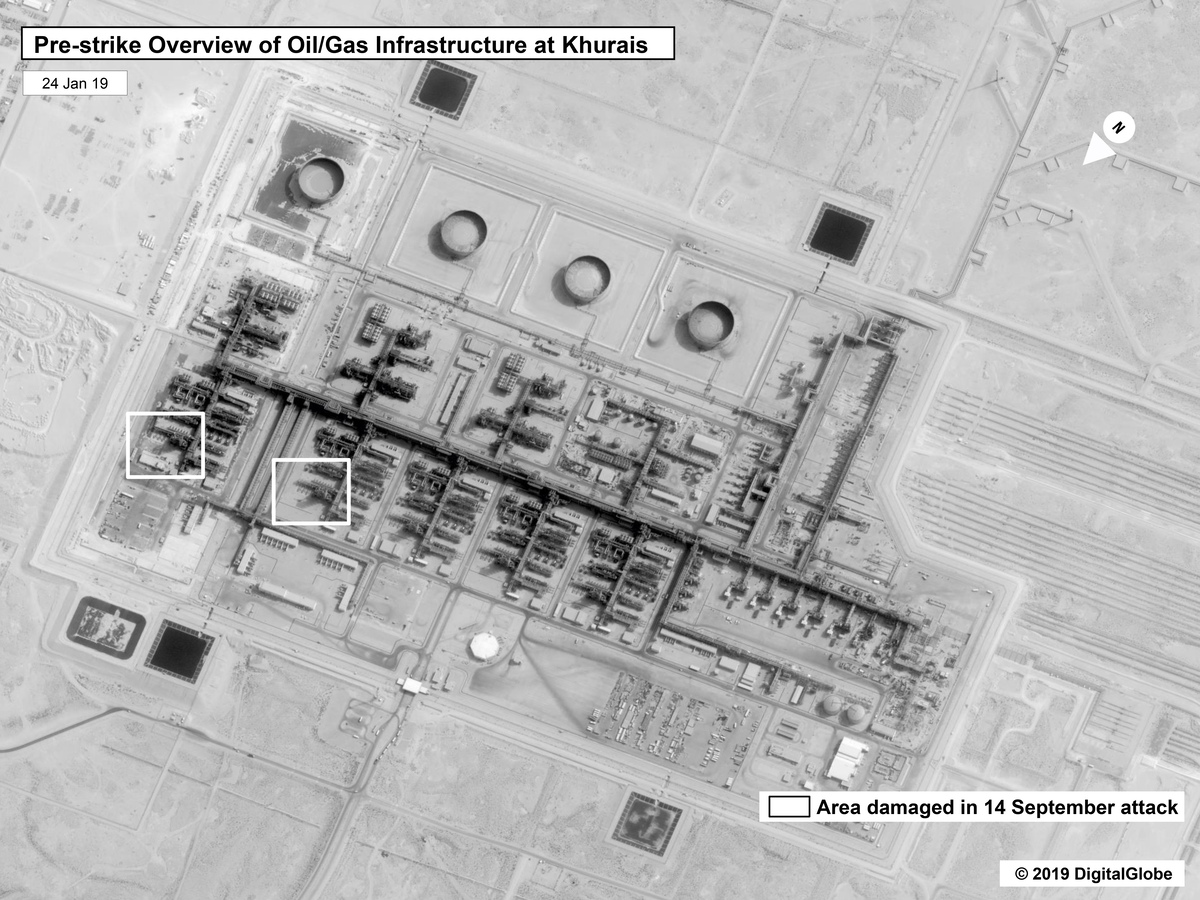 This image provided on Sunday by the U.S. government and DigitalGlobe and annotated by the source, shows a prestrike overview at Saudi Aramco's Khurais oil field in Buqayq, Saudi Arabia.

The price of oil saw a massive price spike Monday following what are believed to be drone strikes on Saudi oil facilities over the weekend that has shut off more than half of the kingdom's daily exports, or about 5% of the world's crude production.

Benchmark Brent crude briefly surged almost 20% in early trading before settling closer to 10%, up $6 to $66.28 per barrel. It rose again in the early afternoon, topping $70 for an increase of some 15%. The U.S. benchmark West Texas crude rose more than 10%.

The loss of the 5.7 million barrels of Saudi crude production represents the largest such disruption on record, according to figures from the Paris-based International Energy Agency.

Experts say it could take weeks before the kingdom is able to restore full production at the facilities, according to The Telegraph.

Riyadh says its stockpiles will keep world markets supplied until it can repair the damage at Abqaiq and Khurais.

The attacks come as Saudi Arabia prepares to sell stock in its state-owned oil giant Saudi Aramco, in what's predicted to be the largest IPO in history. While only a small percentage of the company is expected to be sold, Aramco is currently valued at anywhere from $1.5 trillion to $2 trillion.

The IPO would have two phases: a local sale in Saudi Arabia that's expected to occur late this year, and an international sale that would happen in 2020.

With some of Aramco's largest oil facilities currently out of commission, Saudi officials are considering whether to delay the company's IPO, according to The Wall Street Journal.

Speaking to reporters in Riyadh on Monday, the spokesperson for the Saudi-led Coalition to Restore Legitimacy in Yemen, Col. Turki al-Maliki, said that although an investigation is still underway, the coalition believes the weapons used in the attack are Ababil-class drones from Iran.

"The preliminary results show that the weapons are Iranian and we are currently working to determine the location" of their launch, al-Maliki said, according to the Saudi Gazette. He added, "The terrorist attack did not originate from Yemen as the Houthi militia claimed."

Yemen's Iranian-backed Houthi rebels have said they are responsible for the attacks, and Iran has denied involvement. But U.S. officials are blaming Tehran.

On Monday, President Trump said it is "looking like" Iran was behind the attack on Saudi oil facilities, but he seemed to downplay a potential conflict with Tehran. "Do I want war? I don't want war with anybody," Trump said in the Oval Office.

He said Secretary of State Pompeo and other administration officials soon will go to Saudi Arabia.

If there is military action, Trump said Saudi Arabia would pick up some of the costs.

Later when asked whether any potential U.S. military response would be proportional to an Iranian attack, he said, "I think it would."

And on Sunday evening, Trump said, "There is reason to believe that we know the culprit, are locked and loaded depending on verification, but are waiting to hear from the Kingdom as to who they believe was the cause of this attack, and under what terms we would proceed!"

Saudi Arabia oil supply was attacked. There is reason to believe that we know the culprit, are locked and loaded depending on verification, but are waiting to hear from the Kingdom as to who they believe was the cause of this attack, and under what terms we would proceed!

Although Saudi officials have been cautious about laying blame, Pompeo has directly accused Tehran of playing a key role in the strikes.

"Amid all the calls for de-escalation, Iran has now launched an unprecedented attack on the world's energy supply. There is no evidence the attacks came from Yemen," Pompeo tweeted Saturday.

Tehran is behind nearly 100 attacks on Saudi Arabia while Rouhani and Zarif pretend to engage in diplomacy. Amid all the calls for de-escalation, Iran has now launched an unprecedented attack on the world’s energy supply. There is no evidence the attacks came from Yemen.

"The Americans adopted the 'maximum pressure' policy against Iran, which, due to its failure, is leaning toward 'maximum lies,' " Mousavi said.

Faced with a possible disruption to the U.S. energy supply, Trump said Sunday that he has authorized the release of oil from the U.S. Strategic Petroleum Reserve if necessary "in a to-be-determined amount ... sufficient to keep the markets well-supplied."

In his remarks about Iran and the attacks in Saudi Arabia, Trump used language similar to comments directed at Tehran in June, after a U.S. drone was shot down over what Washington says were international waters.

In a U.N. Security Council briefing about Saturday's attacks, the special envoy of the Secretary-General for Yemen, Martin Griffiths, says it is "frankly terrifying" to consider that the fighting in Yemen now has an even higher chance of evolving into a regional conflict.

"It is not entirely clear who was behind the attack, but the fact that Ansar Allah has claimed responsibility is bad enough," Griffiths said, referring to the Houthi rebel group. "And whatever we will discover of the attack, it is a sure sign that for Yemen, the direction of travel seems to be away from the peace we all seek."

To underscore the war's horrible toll in Yemen, Griffiths cited a Sept. 1 airstrike in which the Saudi-led coalition was blamed for killing some 110 people and wounding 43 more in an attack on a detention facility.