Accessibility links
Book Review: In 'Wildhood,' Scientists See Similarities In Adolescent Humans And Other Animals Understanding the lives of animals can illuminate our own — and those of loved adolescents too. But authors Barbara Natterson-Horowitz and Kathryn Bowers at times push cross-species links too far. 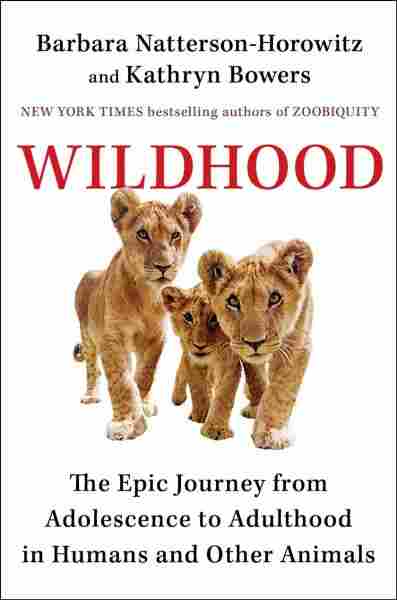 by Barbara Natterson-Horowitz and Kathryn Bowers

Do you worry over a young-adult family member, just out of college or in between jobs, who has moved back home? Or a teenager who faces bullying at school?

In Wildhood: The Epic Journey from Adolescence to Adulthood in Humans and Other Animals, Barbara Natterson-Horowitz and Kathryn Bowers invite you to find wisdom in the ways that penguins, hyenas, whales, wolves and other animals experience adolescence.

In their bestselling earlier book, Zoobiquity, Natterson-Horowitz, an evolutionary biologist and professor of medicine, and Bowers, a science writer and animal behaviorist, examined ways in which human health and animal health are linked. Now in Wildhood, they team up again to look across species at adolescence, that in-between stage of life when one is neither a young child nor a full adult. Puberty, they explain, is about physical development, whereas adolescence "combines body and behavior. It is about learning to think, act, and even feel like a mature member of a group." Because animals have been doing this for millions of years, we can take a lesson or two from them about the process.

Take the phenomenon of "boomerang kids," those young adult humans who move back home after an initial period of relative independence. Often it's viewed critically, as if the parents are overindulging offspring who should be more self-reliant. Yet this sort of prolonged parental help is widespread in the animal world, the authors say.

Many birds and mammals at adolescence are allowed or encouraged to stay home instead of striking out on their own. They may babysit younger siblings or otherwise help out while avoiding the dangers of the wider world. Sometimes the parental help offered is pretty extreme. Red squirrel mothers in middle age cede their territories to their adult offspring, often stocking those territories with food first. Certain songbird moms escort their older offspring to other flocks and introduce them to high-status potential mates. Costs may incur to these stay-at-home youngsters too, because they don't get much experience in finding their own food or coping with predators.

Natterson-Horowitz and Bowers conclude, "Recognizing the advantages and disadvantages of extending parental care in the animal world can help humans develop a more realistic and perhaps even compassionate understanding of how and when to continue to support their older and adult children."

A reader's response to Wildhood is likely to depend on how convincing this line of reasoning is thought to be. It's refreshing to see this acknowledgment of how similar we humans are to other animals. Yet it could fairly be asked, how informative is this sort of specific comparison really? After all, while adolescent animals often need to negotiate complex family dynamics and group dominance hierarchies, they don't face the pressures of overdue student loans and mental health crises — or sexism or racism. The culturally constructed, power-based inequalities in the human world are qualitatively different.

Similarly, can it be true that "it is impossible to fully understand the complexities of human bullying without examining its function and form in animals"? In mice and monkeys, learning performances of low-status individuals are inhibited via various mechanisms by their alpha superiors. There are conserved evolutionary tendencies across mammals, and we are mammals too.

Yet too often the direct analogies undertaken in Wildhood between humans and other animals go way too far. When the text leaps from "seriously depressed adolescents and young adult humans" in one paragraph to "defeated lobsters and hyenas" in the next, good science has been left behind.

A disturbing instance of this problem comes in the section on predation. Here we find a discussion of how pharaoh cuttlefish (a type of cephalopod akin to octopuses) act as predators on hermit crabs through deceptive altering of their appearance. It is followed immediately by one about predators, like kidnappers, on human adolescents. Natterson-Horowitz and Bowers are not shy about making the comparison a direct one: "Sometimes, like pharaoh cuttlefish, [the abductors] took on a nonthreatening appearance."

I question what can meaningfully be learned by comparing predators, who eat another species as part of their evolved biology, to human predators who intend terrible harm to someone of their own species.

And it's simply not sensible — or wise — to compare the mobbing behavior of songbirds that dive-bomb a house cat with the marching from Selma to Montgomery of activists who fought for civil rights.

Despite these problems, there's fascinating material in Wildhood backed up with copious notes from the authors' reading of the scientific literature. The structure of the book is appealing. Each of the four main sections is centered on one concept and one individual animal. In "Safety," we meet penguin Ursula near Antarctica; in "Status," hyena Shrink in Tanzania; in "Sex," humpback whale Salt born near the Dominican Republic; and in "Self-Reliance," wolf Slavc in Slovenia and Italy. Slavc's life history is especially suspenseful: As he trekked across the Alps, I was caught up in the steep learning curve he experienced in keeping himself alive.

As an anthropologist who has spent an animal-focused career urging recognition of the ways we humans share thinking and feeling capacities with many other species, I found Wildhood a mixed blessing. Understanding the lives of animals can illuminate our own — and those of loved adolescents in our lives too. Pushing these cross-species links too far, however, does justice to no one.

Barbara J. King is an author and professor emerita of anthropology at the College of William and Mary. Watch her 2019 TED talk on animal grief and love here.