Accessibility links
As Amish Leave Farming For Other Work, Some Leave Their Homestead Lancaster, Pa., is changing as only about a third of the fast-growing religious group there still farm. Most Amish heads of household work in businesses and construction these days. 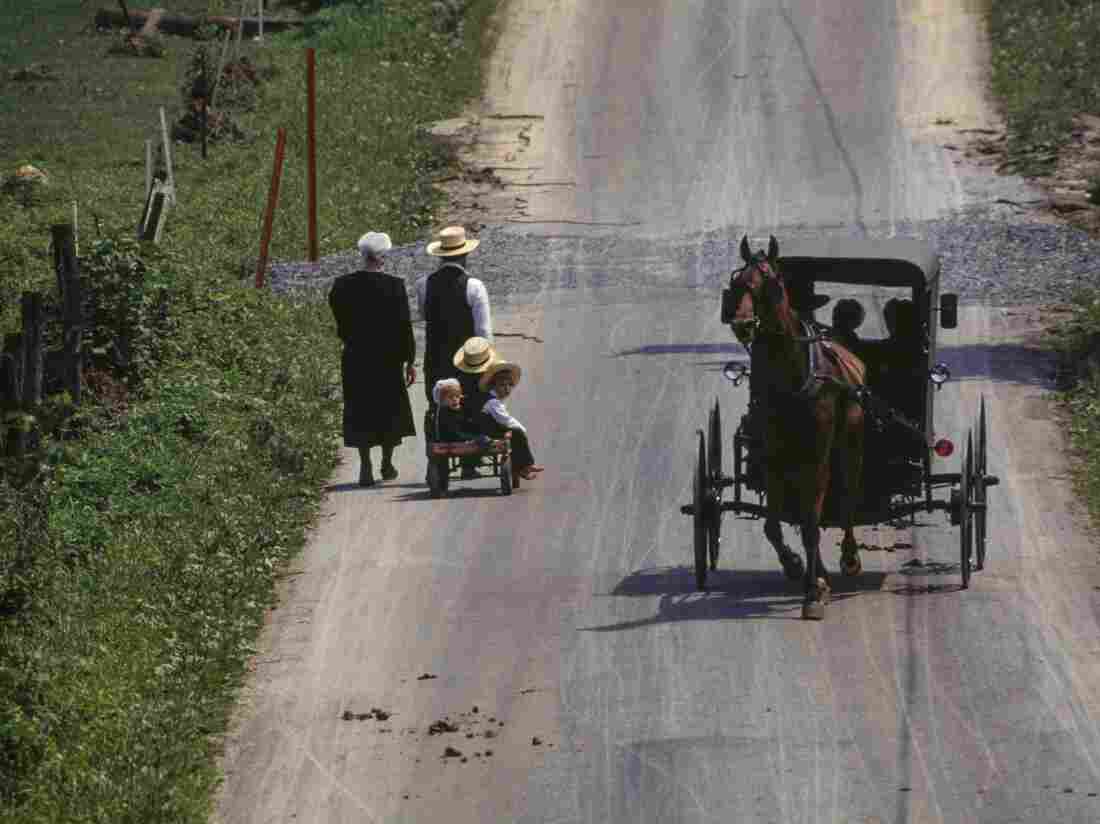 Amish families go down a road in Lancaster, Pa., one on foot and the other by horse-drawn carriage. The high cost of farmland is driving some Amish people to move to where land is more affordable. DEA/G. ROLI/De Agostini via Getty Images hide caption 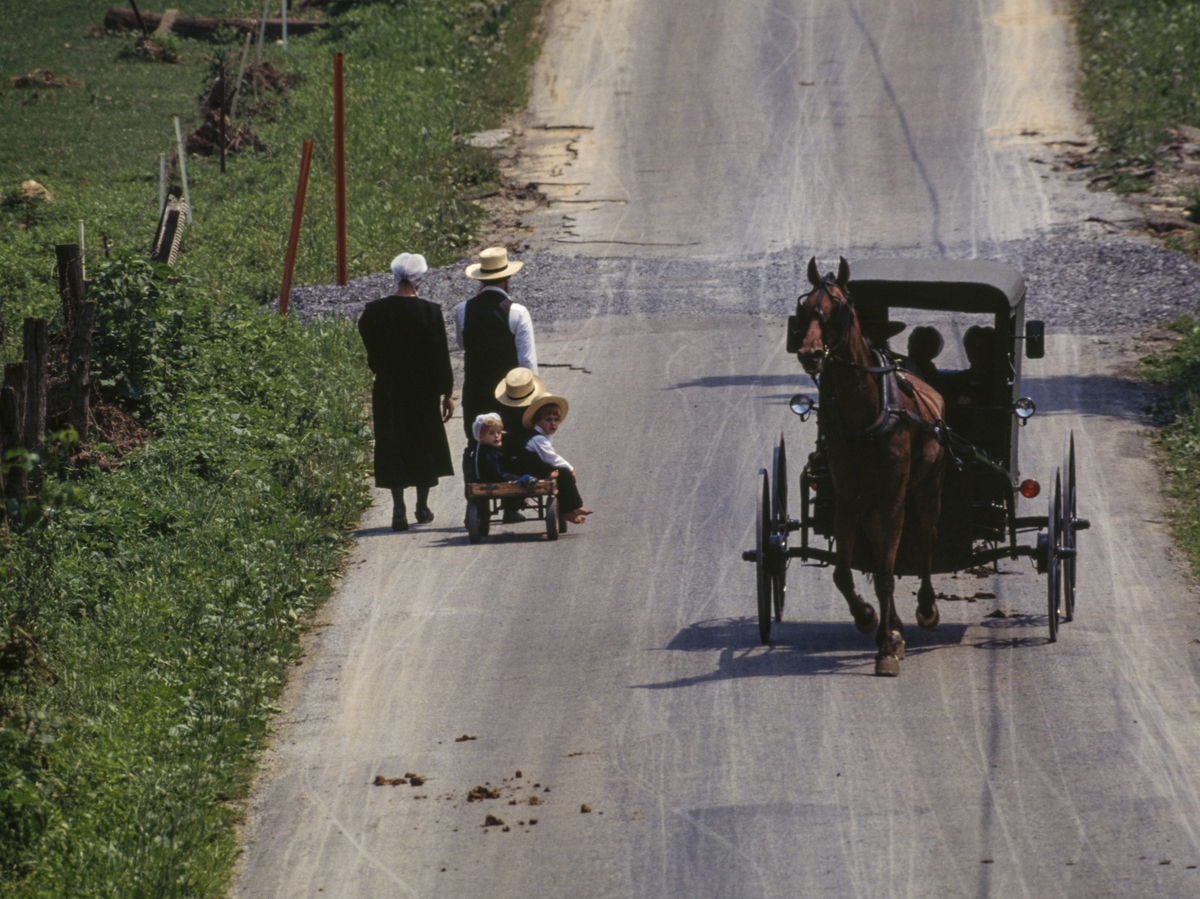 Amish families go down a road in Lancaster, Pa., one on foot and the other by horse-drawn carriage. The high cost of farmland is driving some Amish people to move to where land is more affordable.

Over the past couple of years, Strasburg Township's zoning office in Pennsylvania found itself fielding more and more requests from Amish people to house horses on residential lots.

Most Amish in Lancaster County today work outside the farm, so they have been moving into homes on smaller lots — but they still need horses for transportation.

In response, Strasburg Township's Board of Supervisors voted to allow the horses — with some restrictions.

'Becoming Amish': Leaving The Modern World For The Old World

'Becoming Amish': Leaving The Modern World For The Old World

That's one example of how local governments around the state and the Amish are adjusting to the pressure a growing population is putting on the Plain community's traditional way of life.

It's a different scenario in Manheim Township, where some Amish are concerned about how plans for future development will affect the way they travel between each other's homes. This summer, township commissioners approved a 76-acre mixed-use development along Oregon Pike.

But one Amish man believes turning to the townships to solve problems of space is like "rearranging the chairs on the deck of the Titanic." His vision is to see the Amish leave their historic homeland.

Only about one-third of Amish in Lancaster County are still farming, but many want to preserve a rural lifestyle.

That can create some friction for non-Amish neighbors, whom the Amish call "English."

"I have seen a cultural clash between the Amish community and the English," said C. Michael Weaver, a supervisor in Strasburg Township.

For example, some English might not want two horses in the yard right next door at their Amish neighbor's house.

The township's board of supervisors is trying to balance the needs of both groups.

A person used to need one acre of land per horse to keep the animal on their property. Last year, the supervisors voted to allow up to two horses, for the purpose of transportation, to be kept on a half-acre lot.

As a compromise to English residents, the ordinance included restrictions on the size of the buildings used to shelter the horses, the distance they have to be from property lines and requirements for storing manure.

Weaver noted the pace of the requests did slow down.

"But we have found with the new ordinance, many of the Amish have asked for variances on the size of the carriage house," Weaver said. He doesn't foresee another change; he said the current rules are a fair compromise for neighbors.

Amish are moving into homes on smaller lots because most have left farming behind for other opportunities.

For some, it may be a forced choice. For young Amish, in particular, the price of farming is out of reach.

Bill O'Brien, chief lending officer for the Bank of Bird-in-Hand, said he's been financing agricultural loans for more than 30 years and he's watched as the price for an acre of farmland in the county grew from about $8,000 to $20,000. O'Brien credits the increase to the desire among the Amish and Mennonite communities to own farmland, and the success the Plain communities have had working the land.

He said it's still possible to make money farming in Lancaster County.

"But we've reached the point where the price of farm per acre is well beyond the income-producing ability of it," O'Brien said.

The high cost is driving some Amish to pick up and move to where land is more affordable.

Lancaster is one of Pennsylvania's fastest-growing counties, in part because of Amish population growth.

While the United States' population grew at its slowest rate since the Great Depression from 2017-18, the Amish grew at about six times the U.S. rate.

Researchers at the Young Center for Anabaptist and Pietist Studies at Elizabethtown College rely on Amish documents with self-reported numbers to calculate an estimated population.

The Amish population nearly doubles every two decades. According to the Young Center's most recent tally, it now stands at 336,235 nationwide.

Lancaster County is home to 39,255, giving it more than 10% of the Amish population and making it the largest settlement in the United States.

He said about 20 households left the county in the past year — not statistically significant, but noteworthy.

Reasons for leaving include finances, family ties, a desire to farm and even just a change of pace. Some are seeking a more conservative or liberal lifestyle. 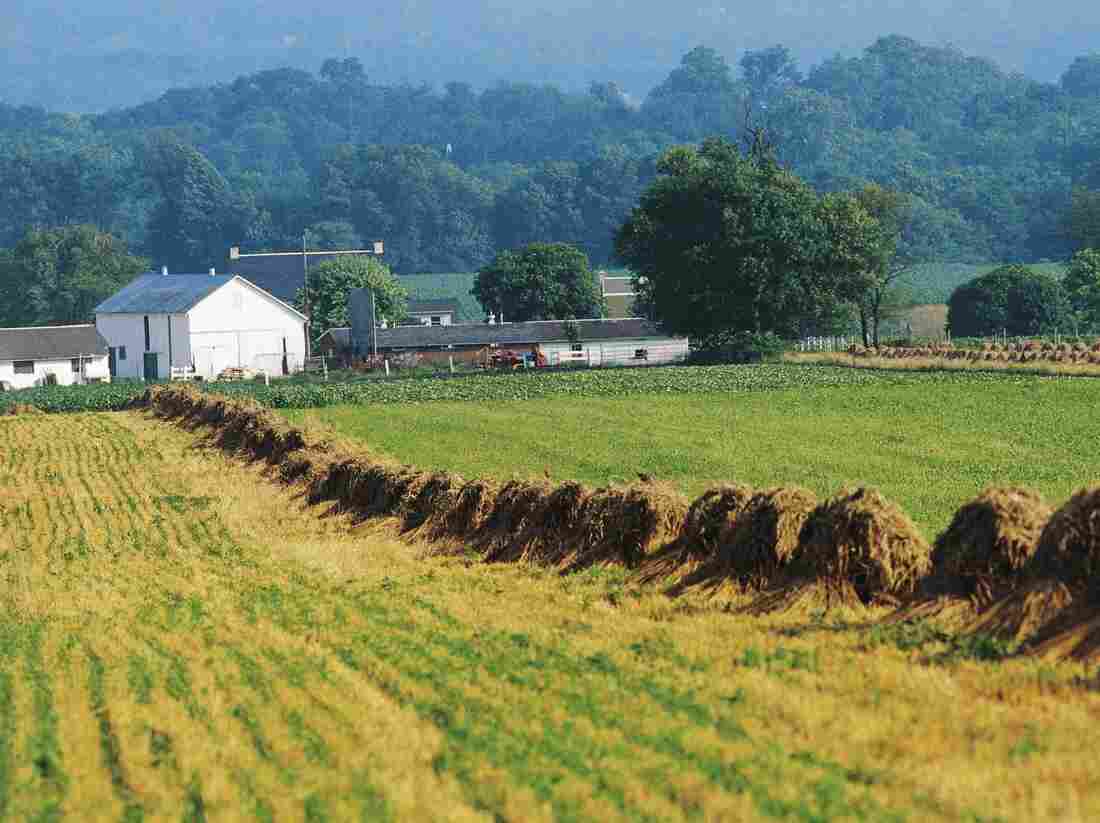 Sheaves of hand-harvested wheat on an Amish farm in Lancaster, Pa. Over the past 30 years the price for an acre of farmland in Lancaster County grew from about $8,000 to $20,000. DEA/G. ROLI/De Agostini via Getty Images hide caption 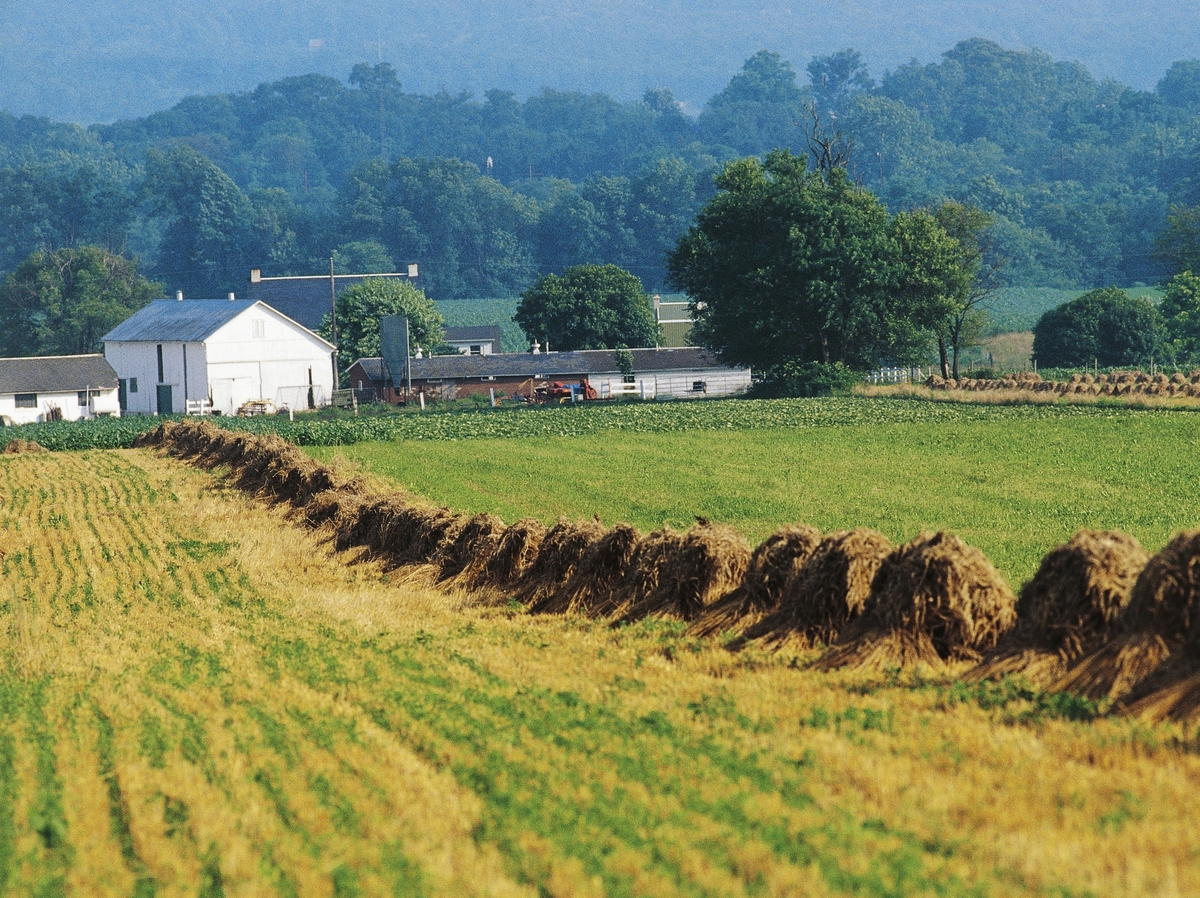 Sheaves of hand-harvested wheat on an Amish farm in Lancaster, Pa. Over the past 30 years the price for an acre of farmland in Lancaster County grew from about $8,000 to $20,000.

Chet Lapp, an Amish realtor, argues more of his fellow Amish should leave Lancaster County for the purpose of preserving their faith.

Lapp describes himself as a "mad visionary."

The 37-year-old is responsible for the creation of one of Pennsylvania's newest Amish settlements, in Glen Rock, York County.

Lapp had been helping Amish families move out of Lancaster County to join other settlements since he got his real estate agent's license in 2012, but the Glen Rock community is different. Lapp scouted the area with his broker ahead of time, then found people interested in moving.

One of those people is Sara Glick.

She and her husband own the Glick's Produce stand in the Markets at Shrewsbury, not far from Glen Rock. Glick called her move from a settlement in Newburg, in Cumberland County, a "good challenge." She's now closer to her work, and that lets her spend more time with her five children, ages 3 through 12.

Glick is an outlier in her new community, though. She said most of her new neighbors moved from Lancaster County to farm.

A blueprint for the future

Lapp is hoping the settlement can become a blueprint for the future. He said it's far enough away from Lancaster to be affordable, while being close enough that those who move can still see family back home regularly.

He said he believes many Amish would move if they had that structure and remained close to supportive family members.

Lapp is concerned that, as a group, the Amish lack a plan for tackling issues of affordability and identity.

It's only families with money, he said, that will be able to keep farming in Lancaster County.

"For young John Stoltzfus, if you will, to maybe be starting at zero at 21. He's not going to make — he's not going to carry a lunch bucket then turn around and pay a million bucks. Ain't gonna happen," Lapp said.

As Amish heads of household more often work outside the home, in fields like business and construction, families are spending less time together. Lapp said those experiences in the modern world threaten their culture and traditions.

"That influence comes back into the home — period, you can't change that," Lapp said.

As he sees it, the Amish could evolve in two ways: either by taking on more of the modern culture in Lancaster County, or by safeguarding the traditions of their faith outside of their historic homeland.

"I'm perfectly content to ride this out until people understand that we have to [move]," Lapp said.

Loyal to the homeland

It's unlikely Lancaster County will cease to be a cradle of the Amish community.

Support from older generations would be key, Lapp said, to help younger ones start new communities.

Traditionally, there's been something of a stigma for those who leave. The Lancaster County Amish, in particular, have been very loyal to their homeland.

"There seems to be just a stronger attraction or pull in the Lancaster settlement of people staying here, of preferring to take on nonfarm jobs and remain here," Nolt said.

An older farmer who wished to be identified only as a Leacock Township Amish man spoke about why some Amish move.

Most Amish, for religious reasons, do not agree to be photographed or have their voices recorded. WITF is not using the Leacock Township farmer's name because he agreed to a limited recording for the radio version of this story, and even that is frowned upon in his community. He was concerned that if he were to be named in the online story, community members would know he had been recorded as well.

His large white farmhouse and barn sit far back from the road, surrounded by fields of corn.

As he sat in his front yard under the shade of an old tree, he told how his ancestors came to the county in 1800 and his five-times-great-grandfather bought this very farm.

He understands why younger people would want to leave. Some just want to "chase the Daniel Boone spirit," he said, but many can't afford to buy farmland, especially if their fathers left agriculture for another trade. He also cited growing taxes and encroaching development as reasons for leaving.

We are being squeezed, he said.

"I know we use horse-drawn vehicles. I know we farm with horses," he said. "But we do this to preserve our heritage and for our children and our grandchildren."