Accessibility links
Cokie Roberts, Longtime Washington Broadcaster, Dies at 75 Roberts, who joined the fledgling network in 1978, was a seasoned Washington insider who developed a distinctive voice as a reporter and commentator for both NPR and ABC News. 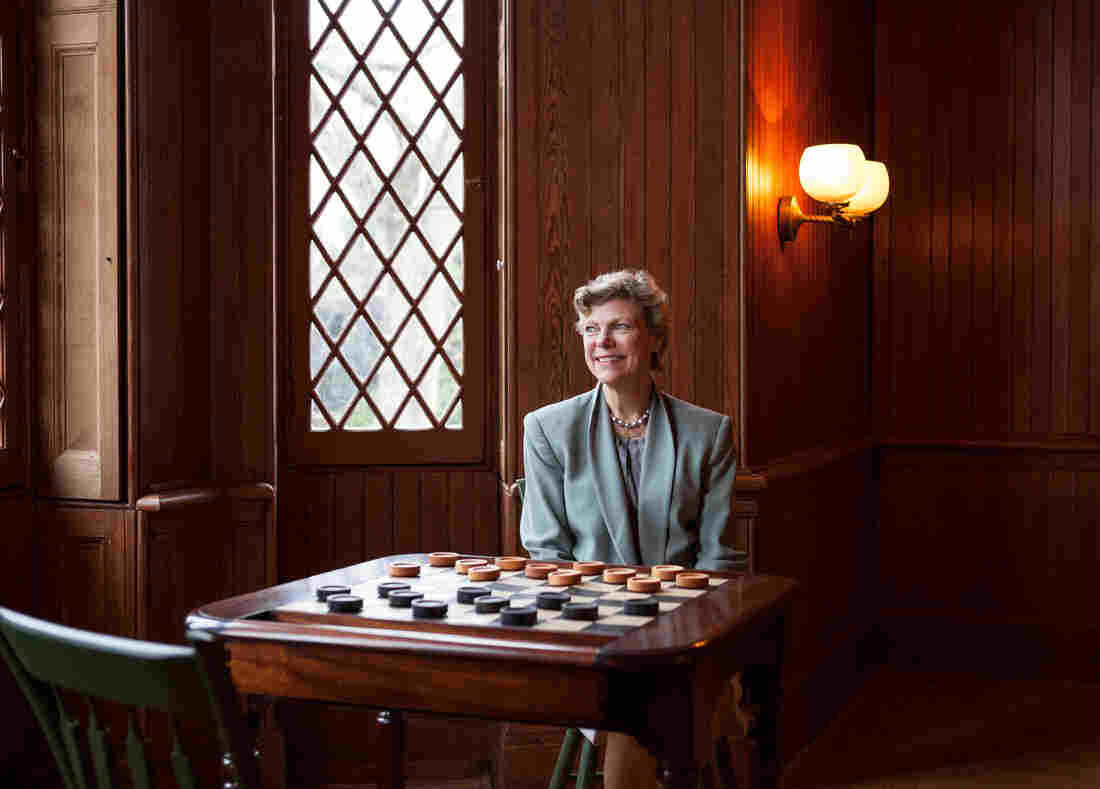 Cokie Roberts was one of NPR's most recognizable voices and is considered one of a handful of pioneering female journalists who helped shape the public broadcaster's sound and culture. She died Tuesday. Ariel Zambelich/NPR hide caption 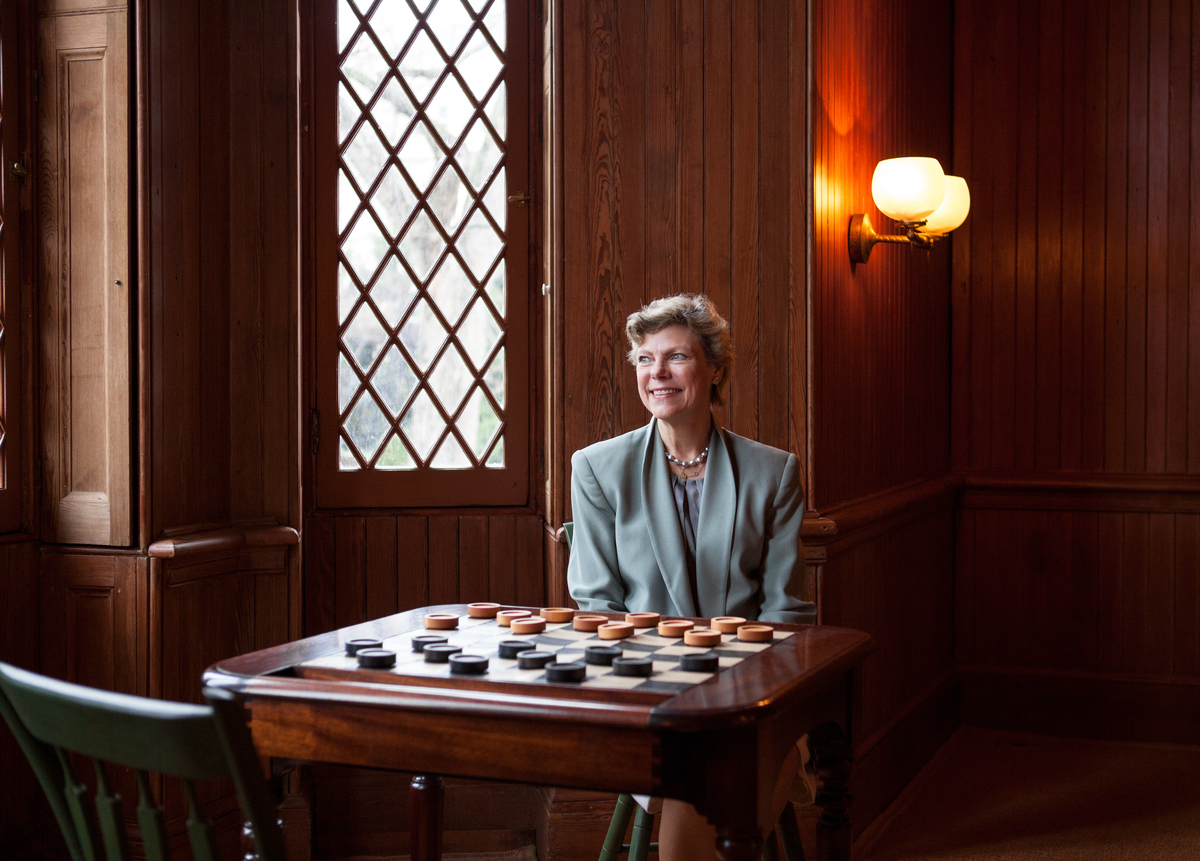 Cokie Roberts was one of NPR's most recognizable voices and is considered one of a handful of pioneering female journalists who helped shape the public broadcaster's sound and culture. She died Tuesday.

Veteran journalist Cokie Roberts, who joined an upstart NPR in 1978 and left an indelible imprint on the growing network with her coverage of Washington politics before later going to ABC News, has died. She was 75.

In lieu of flowers, those who wish to further honor the memory of Cokie may do so by making a contribution to the Children's Inn at NIH:

Roberts died Tuesday because of complications from breast cancer, according to a family statement.

A bestselling author and Emmy Award winner, Roberts was one of NPR's most recognizable voices and is considered one of a handful of pioneering female journalists — along with Nina Totenberg, Linda Wertheimer and Susan Stamberg — who helped shape the public broadcaster's sound and culture at a time when few women held prominent roles in journalism.

Having so many female voices at a national broadcaster was nothing short of revolutionary in the 1970s, NPR national political correspondent Mara Liasson recalled in an interview with The Daily Princetonian earlier this year.

Liasson said it wasn't so much that NPR had a mission for gender equality but that the network's pay, which was well below the commercial networks of the day, resulted in "a lot of really great women who were in prominent positions there and who helped other women."

By the time Roberts joined ABC News in 1988 — while retaining a part-time role as a political commentator at NPR that she maintained until her death — women were increasingly commonplace at broadcast networks and newspapers. 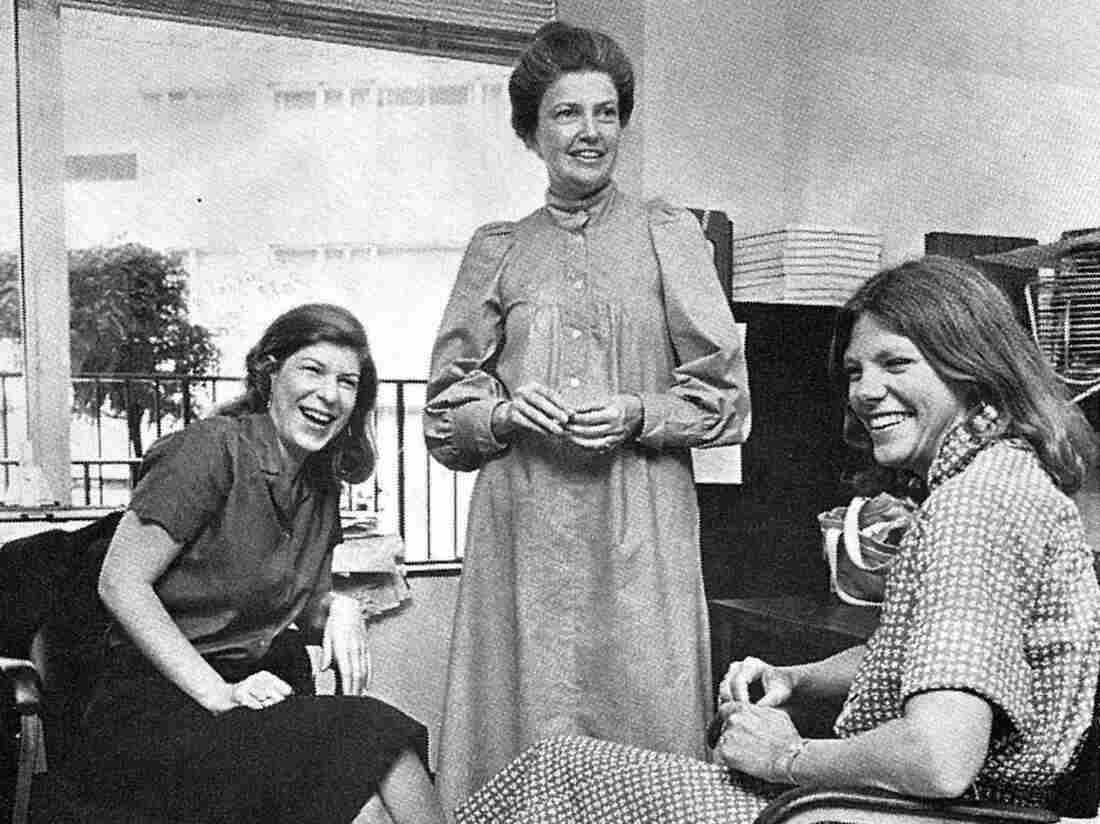 Nina Totenberg, Linda Wertheimer and Cokie Roberts, photographed around 1979, were among the prominent female voices on NPR in its early years. NPR hide caption 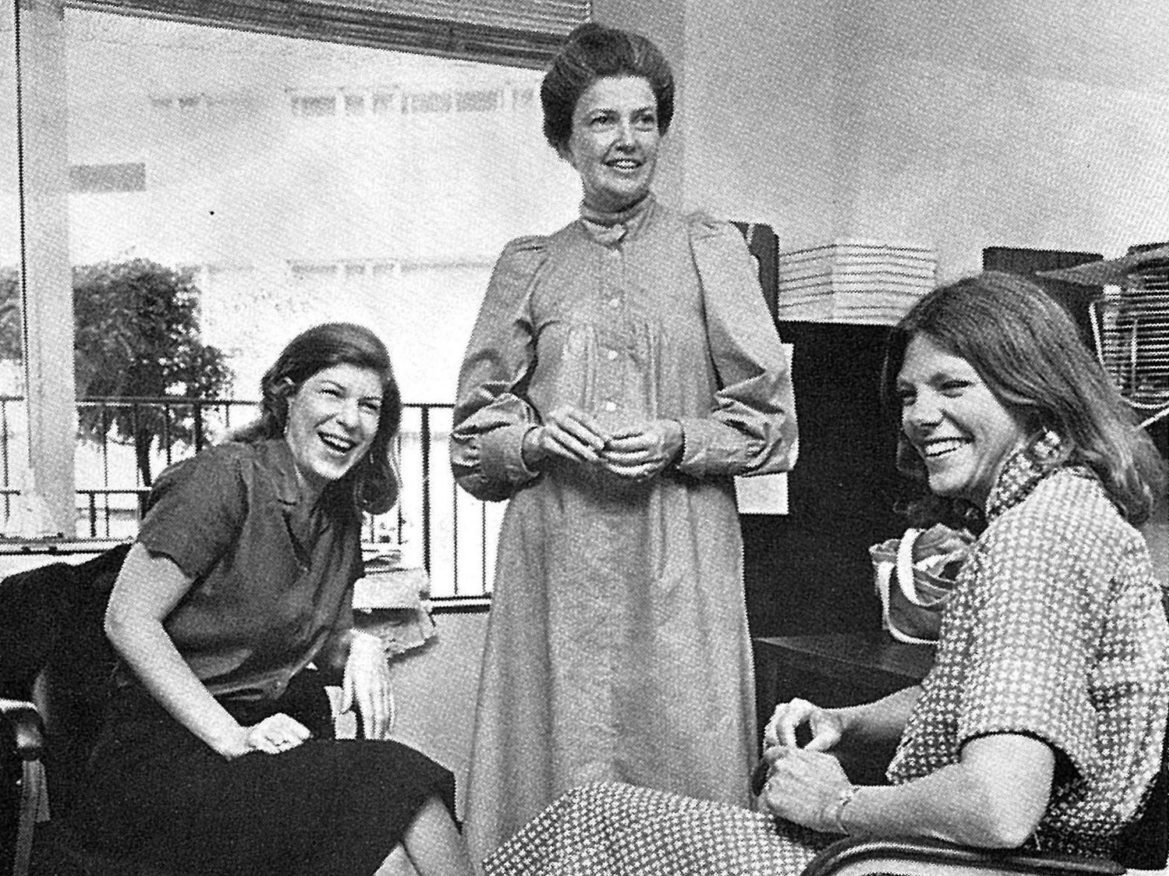 Nina Totenberg, Linda Wertheimer and Cokie Roberts, photographed around 1979, were among the prominent female voices on NPR in its early years.

Roberts, the daughter of former U.S. representatives, grew up walking the halls of Congress and absorbing the personalities, folkways and behind-the-scenes machinations of the nation's capital. She became a seasoned Washington insider who developed a distinctive voice as a reporter and commentator.

In a 2017 interview with Kentucky Educational Television, Roberts reflected on her long career.

"It is such a privilege — you have a front seat to history," she said. "You do get used to it, and you shouldn't, because it is a very special thing to be able to be in the room ... when all kinds of special things are happening." 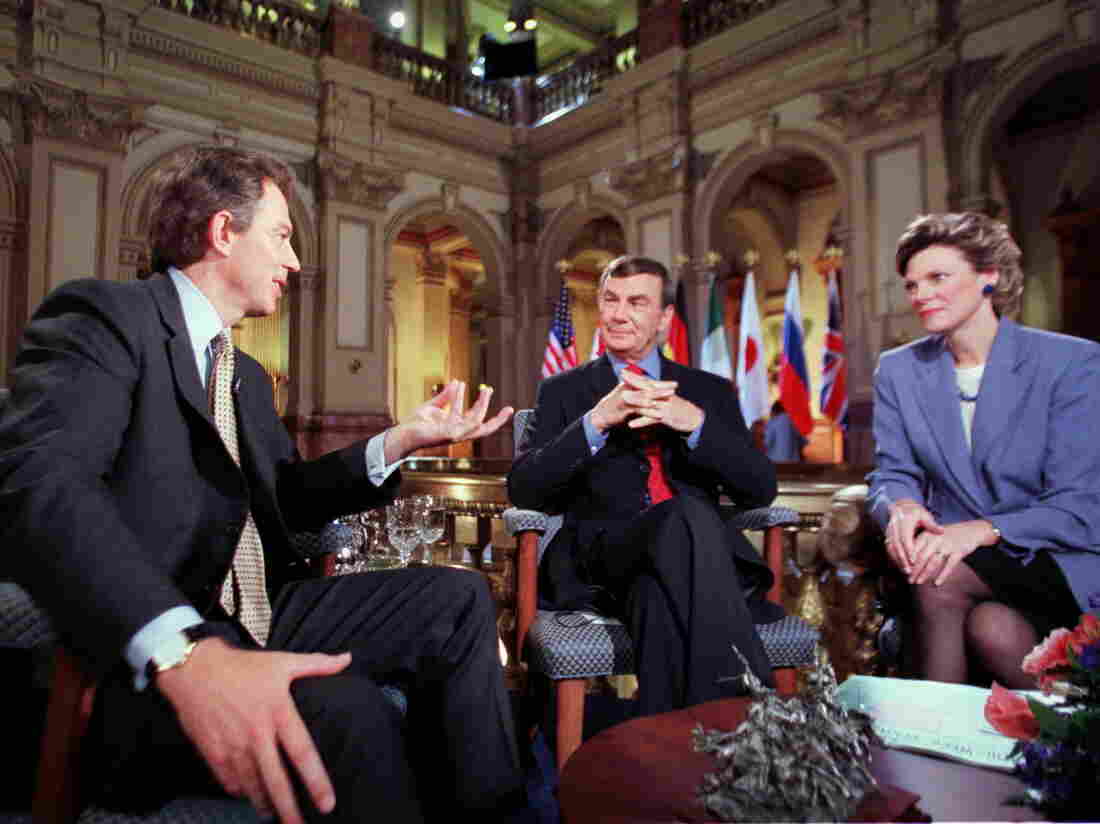 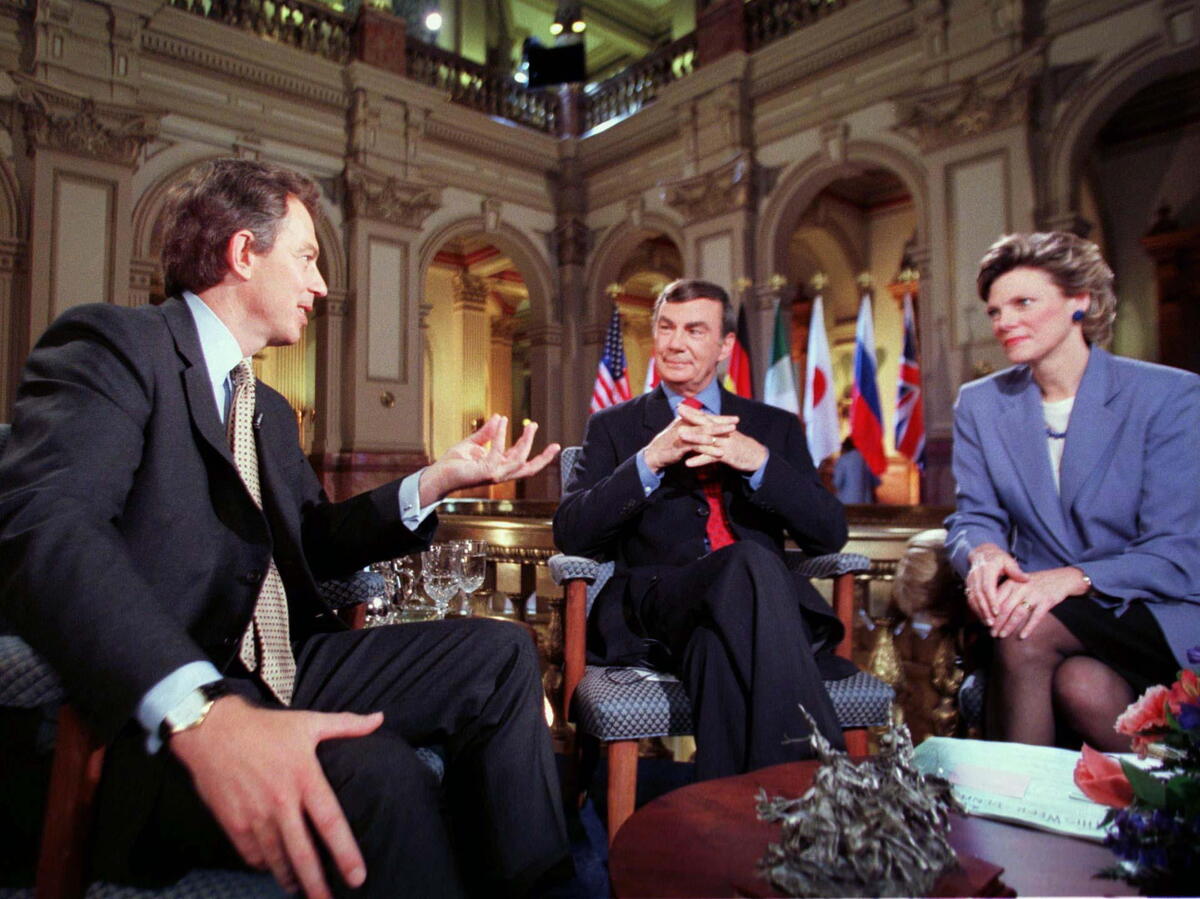 Although she was the only member of her immediate family not to run for Congress, Roberts considered her role as a journalist and political analyst as her way of giving back.

"I do feel strongly that informing the voters about what's going on, trying to explain it in ways that people can understand, and putting the issues out there is a form of participation," Roberts told KET.

Political journalist George Will, who worked with Roberts on ABC's This Week, said Roberts was not just born to the political class but was a natural inhabitant.

Born in New Orleans as Mary Martha Corinne Morrison Claiborne Boggs, she was given the nickname Cokie by her brother, Thomas, who had trouble pronouncing Corinne.

Roberts' father was Thomas Hale Boggs Sr., a former Democratic majority leader of the House who served in Congress for more than three decades before he disappeared on a campaign flight in Alaska in 1972. Her mother, Lindy Claiborne Boggs, took her husband's seat and served for 17 years. Lindy Boggs also served as U.S. ambassador to the Vatican.

Roberts split her time between Louisiana and Washington as a child and attended Wellesley College in Massachusetts. Her first job was at the Washington television station WRC-TV, where she hosted a public affairs program called Meeting of Minds.

She married journalist Steven V. Roberts in 1966. After holding a number of other broadcast jobs, she and her husband moved in the early 1970s to Athens, Greece, where he worked for The New York Times and she filed radio stories as a freelance correspondent for CBS.

In 1977, Roberts and her family returned to Washington, where she took a job with a then-almost unknown NPR. She served as NPR's congressional correspondent for more than 10 years. While in that role, she was also a contributor to PBS's The MacNeil/Lehrer NewsHour.

Roberts left NPR in 1988 to become a political correspondent for ABC's World News Tonight with Peter Jennings. She was also a regular fill-in anchor for Ted Koppel on Nightline. From 1992 to 2002, Roberts co-anchored ABC News' Sunday morning show This Week alongside Sam Donaldson.

Will said that although Washington is a "town of short leases," with people constantly coming and going, Roberts represented the permanent Washington, a kind of figure who was constant through decades of political change: "The Washington not often denounced by people who denounce Washington because they don't know it exists," Will said. "Cokie represented the durable, ongoing Washington that is a custodian of the manners of the city and the sociability of the city that makes it really function."

Roberts won numerous awards during her long career in journalism, including three Emmys and the Edward R. Murrow award. She was inducted into the Broadcasting and Cable Hall of Fame. She was recognized by the American Women in Radio and Television as one of the 50 greatest women in the history of broadcasting.

"Much of Cokie Roberts' fame and credibility resides in her image as a rough-and-trouble woman capable of giving as good as she gets in the equally rough-and-tumble world of male dominated politics," Dan Nimmo wrote in Political Commentators in the United States in the 20th Century.

Roberts said she would often offer this advice to younger women navigating political journalism in Washington: "Duck and file," Roberts said in an interview with the Television Academy Foundation.

"Don't get all involved in the politics of your institution, or competition in your institution. Just do your work and get it on the air, and then people will see if you're good," she said.

Roberts was the author of six books, mostly recently Capital Dames: The Civil War and the Women of Washington, 1848-1868, which examined the role of powerful women in the Civil War era.

As a commentator, Roberts sometimes walked a line that threatened to eclipse her role as a dispassionate journalist. In a February 2016 op-ed co-authored with her husband, they called on "the rational wing" of the Republican Party to stop the nomination of Donald Trump.

"[Trump] is one of the least qualified candidates ever to make a serious run for the presidency," Roberts and her husband wrote. "If he is nominated by a major party — let alone elected — the reputation of the United States would suffer a devastating blow around the world."

In interviews, Roberts often said she might have run for public office herself but thought she would spare her journalist husband the difficulty of what could be an awkward dynamic.

"I have always felt semi-guilty about it. But I've sort of assuaged my guilt by writing about it and feeling like I'm educating people about the government and how to be good voters and good citizens," Roberts told The Washington Post in March.

"In covering Congress, there's plenty of times when I felt, you know, the mother line: I don't care who started it, I'm stopping it. So, to be in a position where you could do that," Roberts told the newspaper.

"It's a great luxury to sit on the outside and analyze, or even give your opinion about how it could be fixed," she said.

In a statement Tuesday, former President Barack Obama and former first lady Michelle Obama called Roberts "a constant over forty years of a shifting media landscape and changing world, informing voters about the issues of our time and mentoring young journalists every step of the way."

House Speaker Nancy Pelosi said Roberts' death was "a great official loss for our nation and a deep personal loss for all who were blessed to call Cokie a friend."

"Cokie Roberts was a trailblazer who forever transformed the role of women in the newsroom and in our history books," Pelosi said in a statement.

Roberts is survived by her husband of 53 years; her two children, Lee Roberts and Rebecca Roberts; and six grandchildren.