Accessibility links
Book Review: 'The Undying' Catalogs The Unceasing Losses Of A Breast Cancer Diagnosis Arriving the year before an election that could set healthcare and disability policy for decades, Anne Boyer's memoir warns us of the human costs of any system that prioritizes profit over lives.

'The Undying' Catalogs The Unceasing Losses Of A Breast Cancer Diagnosis

'The Undying' Catalogs The Unceasing Losses Of A Breast Cancer Diagnosis 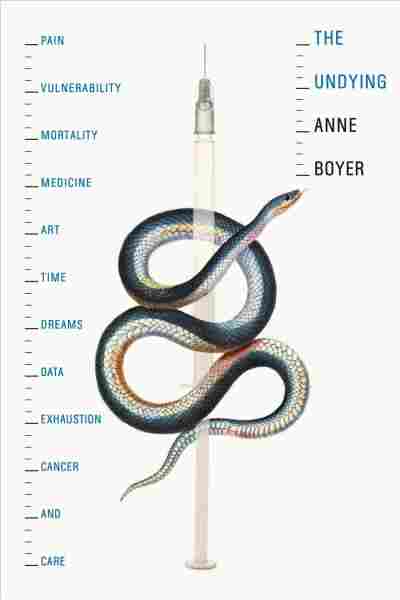 Before poet Anne Boyer got breast cancer at age 41, she believed, like most people unacquainted with the disease, that it "was no longer deadly and that its treatment had been made easy...your life gets a little interrupted but then you get through."

What she learned while undergoing treatment and its aftermath was an entirely different story, an experience marked by physical and psychic agony lyrically detailed in her new book, The Undying, a rousing hybrid of memoir and manifesto.

For all of the awareness campaigns, symbolized by the pink ribbon, and the "extraordinary production of language" that has replaced the silence and stigma once attached to breast cancer, Boyer discovered that startlingly little progress towards a cure has been made. Today's standard of care, for instance, still includes a chemotherapy drug called Adriamycin, which has been used since 1974 and is known as "the Red Devil" because its ruby hue can discolor a patient's bodily fluids. The drug destroys the "white and grey matter of my brain," Boyer writes. It can melt the linoleum of a clinic floor, it causes your hair to fall out and your fingernails to painfully lift from their beds. But it can't guarantee that your cancer won't ultimately kill you.

The Undying catalogs the unceasing losses that accompany a breast cancer diagnosis in the 21st century. The experience of being a patient is poetically rendered; readers who have undergone serious medical crises will immediately recognize the sense of feeling like a wounded, abandoned animal, an experiment, and an object, like "a car with parts that [keep] falling off." But this misery, Boyer suggests, is not the inevitable result of the disease process itself; it's manmade, a product of both capitalism and culture. In the tradition of Audre Lorde, Susan Sontag, and Barbara Ehrenreich, Boyer declares: "Disease is never neutral. Treatment never not ideological. Mortality never without its politics."

Since at least the 1990s, activists have used the phrase "slash, burn, and poison" to emphasize the horrors of breast cancer treatment, referring to mastectomy, radiation, and chemotherapy. To this set of verbs, Boyer adds "wrecked," "mutilated," and "corroded," as well as "harvested, amputated, implanted, punctured, weakened, and infected, often all at once." But Boyer did not suffer simply because "terrible things [were] happening in my body." She laments, as well, the social imperative to endure such things with "good humor" and gratitude — the affective performance that breast cancer patients are tasked with, in which "we are expected to keep our unhappiness to ourselves but donate our courage to everyone."

This sort of self-management is required to establish one's virtue as a sick woman, and sympathy equals currency in a country where our medical care is too frequently crowd-funded. Women with breast cancer become quickly acquainted with a set of mandates: "Exercise when tired, eat when repulsed by food, go to yoga, [and] do not mention death." Eliminate all traces of a negative attitude. Gamely submit to "the calamity of medicine." The Undying draws attention to the coercive nature of this role, and of modern oncology treatment in general. "Choosing chemotherapy is like choosing to jump off a building when someone is holding a gun to your head," Boyer reminds us. It's a choice made under duress, because the only other option is to "die of your own cellular proliferation."

One of the most difficult moments in The Undying happens when Boyer questions whether she deserved her costly treatments. ("How many books, to pay back the world for my still existing, would I have to write," she asks.) The perverse, amoral task of tallying how many dollars of healthcare a person has earned usually falls, in America, to politicians and insurance adjusters. Yet patients are not immune from making such morbid calculations within a system that appraises worth as a function of productivity. Boyer, "a common type of person who must work for a living," showed up to her teaching job while surgical drains — plastic bulbs that suction postoperative blood and fluid — were still attached to her body.

As a single mother without savings "who existed in a world of profit, [and who] had no partner to care for me or family nearby in a world that privatizes survival," she relied on the "stolen slivers of time" that a friend could spare to help her navigate appointments. In the United States, she reminds us, there's no guaranteed paid leave from work "outside the enclosure of family," and the narrow window of time off under the FMLA is inadequate for breast cancer treatment, which often drags on for a year or longer. It's no coincidence, then, that the death rate almost doubles for unmarried women. It climbs further for those who are poor and black. These women are "rarely considered worth enough to keep alive," and our grief for them, Boyer writes, "should tear open the earth."

It's this incandescent rage that animates The Undying, and situates it alongside current literature on feminist anger (Burn It Down, Good and Mad, Rage Becomes Her), as well as recent illness memoirs (Sick, How to Be Loved, The Collected Schizophrenias) critical of a medical establishment that frequently refuses to take women's concerns seriously and punishes non-compliance.

Not long ago, publishers assumed readers wanted whitewashed, upbeat stories about breast cancer, and the market was flooded with cutesy, cringe-inducing titles, like Big C Little Ta-Ta, Let Me Get This Off My Chest, and Killer Boobs. Boyer's intervention into this genre feels like crossing the Rubicon. On the other side, we can finally dispense with all the approaches that got us nowhere: the pseudoscientific quackery of apricot pit and carrot juice cures, the optimizing of wellness via consumerism, and the expectation that patients be "feisty, sexy, thinking, snarky," but ultimately apolitical. We can see the bitter truth, crystalized by one of Boyer's best lines: In light of what she learned, "every pink ribbon looks like the flag of a conqueror stuck in a woman's grave."

This is memoir as anti-capitalist indictment, as biting cultural criticism, as vengeance. It suggests a new era in the politics of breast cancer, one that might look less like corporate sponsored marathons every October and more like the radical, confrontational AIDS activism of the 1980s. Arriving the year before an election that could set healthcare and disability policy for decades, The Undying warns us of the human costs of any system that prioritizes profit over lives.

Sascha Cohen is a writer, historian and breast cancer survivor. Follow her @SaschaSo70s.