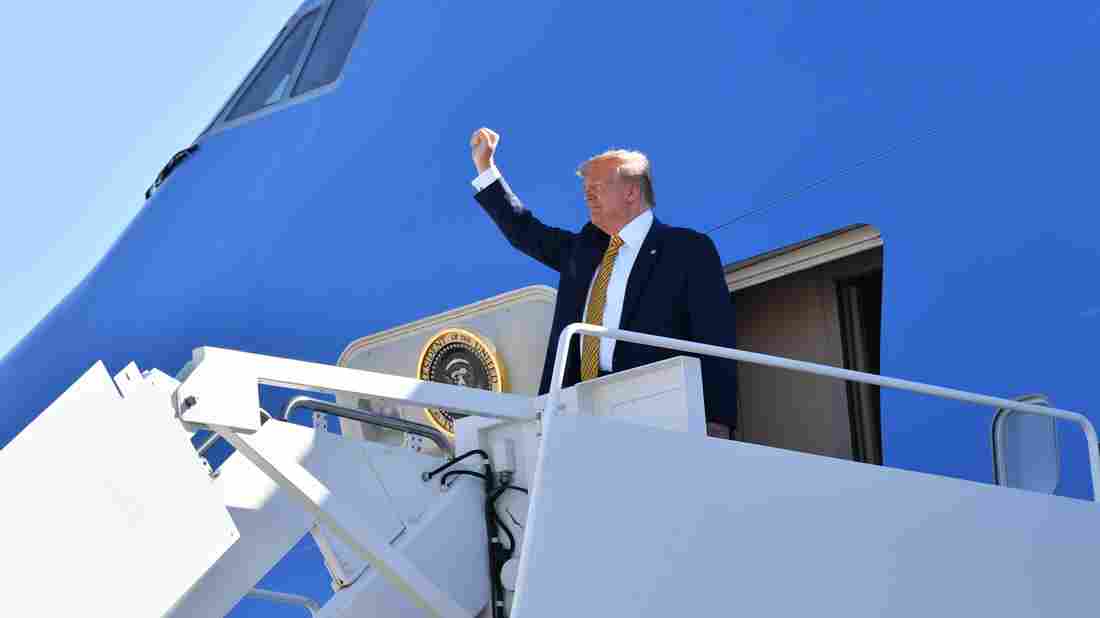 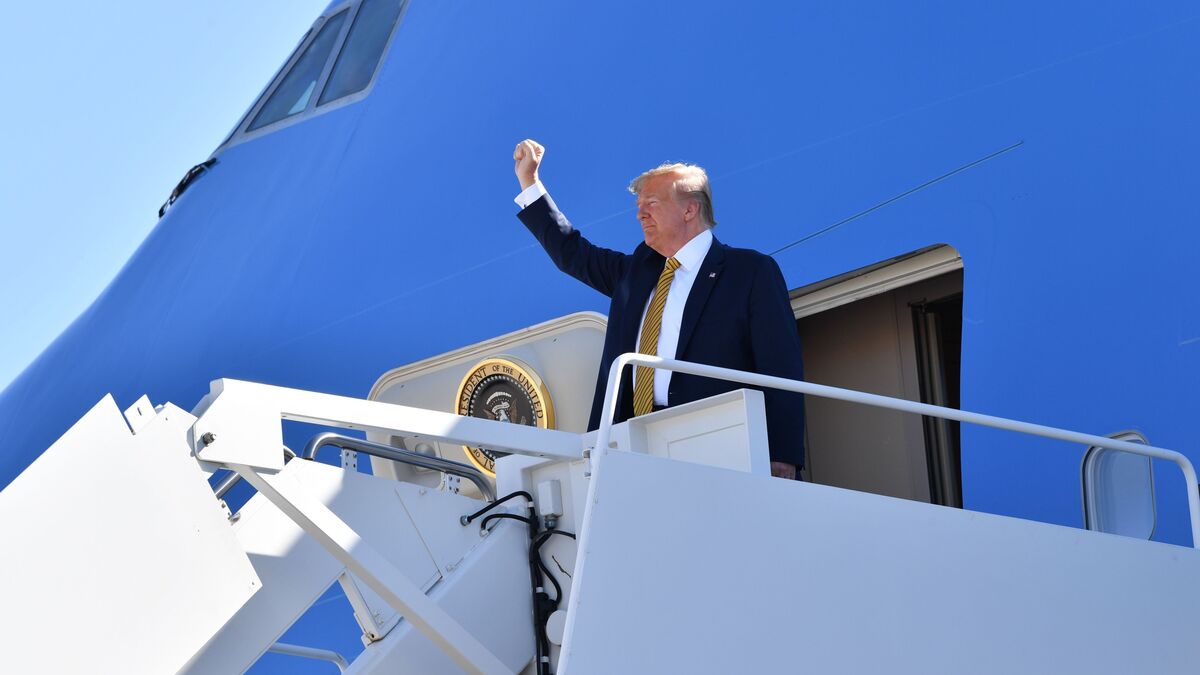 President Trump waves before boarding Air Force One as he departs Albuquerque, N.M., en route to campaign events in California on Tuesday.

When Air Force One touches down at Moffett Field in Mountain View, Calif., Tuesday morning, President Trump will be heading "behind enemy lines," as one supporter called the president's first trip to the San Francisco Bay Area since being elected.

Even so, Trump's re-election campaign and Republican Party coffers will be stuffed with cash when he leaves the state on Wednesday.

While Trump is treated as a kind of devil incarnate by Democratic officials and many of the state's voters, he's not without support, even in deep-blue California.

New Calls To Impeach Justice Kavanaugh: How It Would Work And Why It Likely Won't

It was Dhillon who described California as the "enemy" in a recent New York Times article, but as one of the organizers of Tuesday's lunchtime fundraiser, she's found plenty of friends of the president here.

"The event is sold out, and I could have sold 100 more seats if I had them," Dhillon said.

She wouldn't disclose the exact location of the event, citing security reasons, but said it's somewhere south of San Francisco and will attract "a few hundred" people, some paying $100,000 or more for a chance to see Trump in person.

She noted that donors will be attending from as far away as Reno, Nev., as well as from Yuba, Kings and Sacramento counties. Trump will head to a similar fundraiser in Beverly Hills Tuesday afternoon.

Asked what California donors like about Trump, Dhillon listed his taking the fight to Democrats, "unlike these RINOs (Republican In Name Only)" in Washington, D.C., and also his "America First" rhetoric and tax cuts, although she acknowledged many wealthy Californians are unhappy about the GOP tax bill which places limits on allowable federal deductions for state and local taxes.

Dhillon, who was born in India, added that "some immigrants like me really like his positions on illegal immigration."

Although the administration isn't saying much about the president's upcoming remarks, Trump is sure to use his California visit to continue bashing the state's liberal policies, which he says have contributed to the number of homeless people on the streets.

Last week, Trump administration officials visited Los Angeles to inspect the city's infamous skid row. There were reports the officials also toured federal facilities that could potentially be used to house the homeless.

While that might sound good to Democrats coming from, say, former President Barack Obama, anything this president does is viewed with grave suspicion by his political opponents in California.

Democratic Gov. Gavin Newsom on Monday released a pointed letter to the president, suggesting that if he really wanted to address homelessness, he would help Californians get out of poverty and invest in things like mental health and affordable housing.

"In contrast," Newsom wrote, "your administration has proposed significant cuts to public housing and programs like the Community Development Block Grant."

The letter, signed by Sacramento Mayor Darrell Steinberg on behalf of big city mayors, suggests three specific steps to help prevent homelessness, including providing "50,000 more vouchers to provide rental subsidies for the poor, and an increase in the value of the vouchers to reflect the high cost of housing in California."

At a press conference in Sacramento Monday, Newsom said the letter was sent "not with a clenched fist but an open hand."

While Trump is not expected to go to San Francisco proper, Ben Carson, his secretary of Housing and Urban Development, will visit the city Tuesday.

Kozitsky, who has met with Carson previously, said he welcomes more federal attention to the homeless problem, which has festered and frustrated city officials and residents for decades.

"We really need to refocus our energy on the root cause of this problem which is a lack of affordable housing," Kozitsky said.

"In terms of practical things that the government could be doing right here right now, investing more in affordable housing is what's really needed if we're ever going to get a handle on this nationally."

That sentiment was echoed by San Francisco Mayor London Breed, who has tried, with mixed results, to lower barriers to construction of affordable housing in a city where citizen objections can slow, shrink or even kill affordable housing projects.

"I'm open to anything that's going to help get people permanently housed," Breed said. "What that entails, from my perspective, is getting more housing built and providing subsidies to get housing built. It takes money to get them built."