Accessibility links
New National Security Adviser Robert O'Brien Will Inherit An NSC In Turmoil Career foreign policy professionals tell NPR they increasingly fear that joining the NSC, which is part of the White House, will taint them as political operatives. 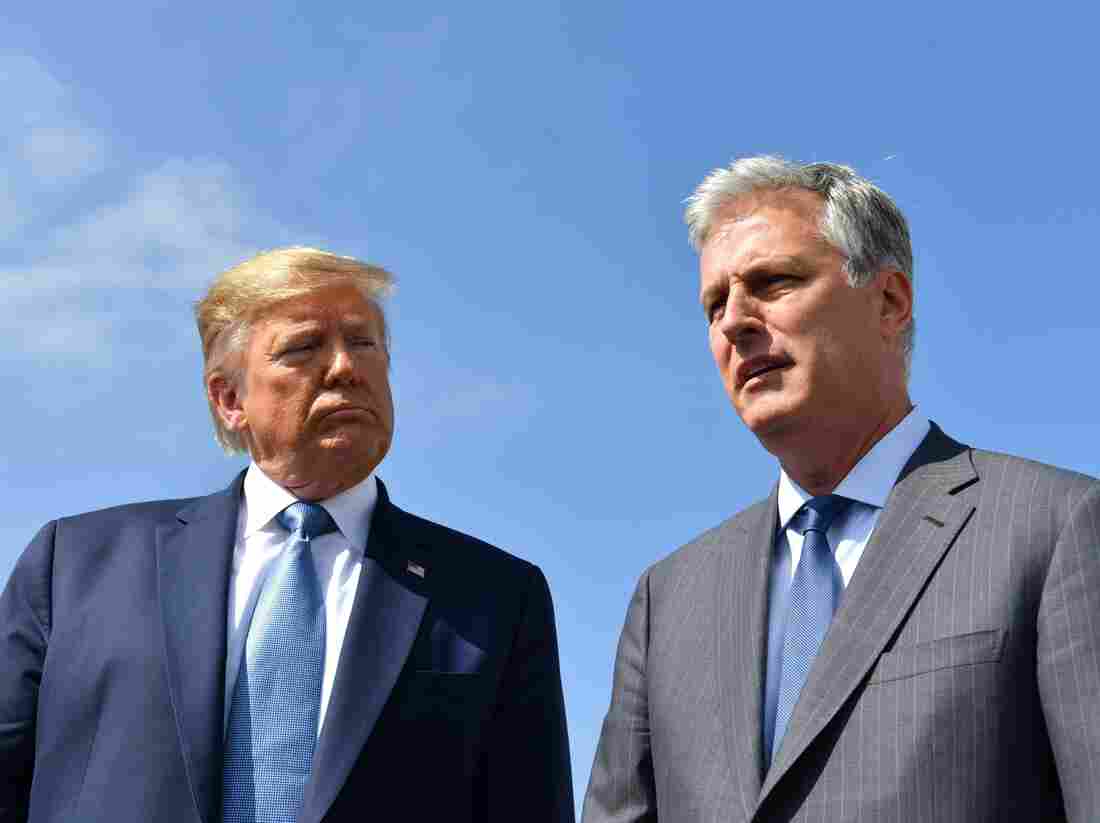 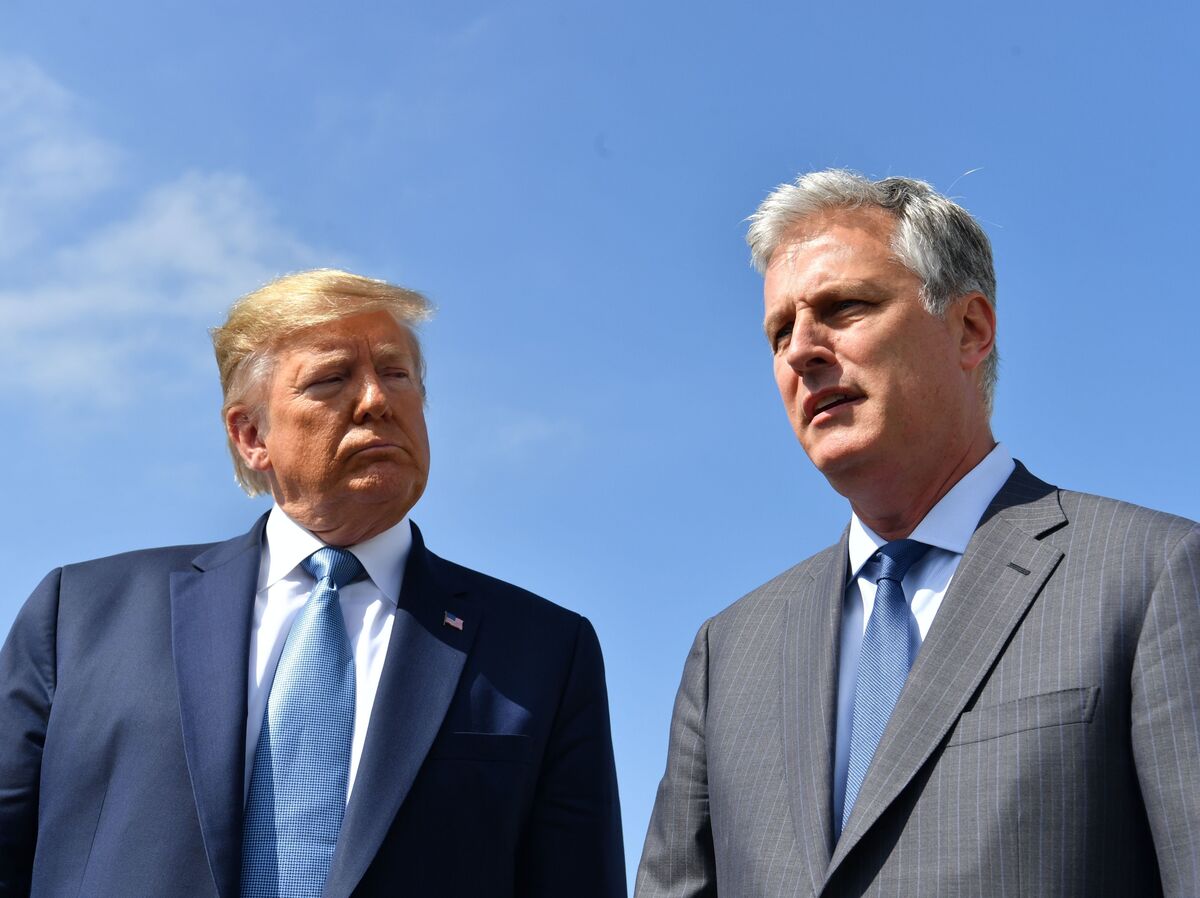 The National Security Council is traditionally one of the most desirable places for ambitious and talented people to work in the U.S. government, because it affords such close proximity to power. But in the Trump administration, some of the government's brightest minds are turning down high-powered NSC assignments, and others are avoiding the place altogether.

Career foreign policy professionals increasingly fear that joining the NSC, which is part of the White House, will taint them as political operatives.

"There is a school of thought that it can be risky for your career — sometimes being there puts you in a position where you have to say no to ambassadors and other senior officials, and they may remember that when you return," said one senior foreign policy official who turned down an offer to serve at the NSC.

It's a stunning reversal for jobs that once offered unparalleled credentials.

Openings for temporary assignments that in previous administrations would have drawn two dozen applications and inquiries are now getting minimal interest, the officials said.

NPR interviewed 12 current and former U.S. officials with knowledge of the NSC's challenges. Most have served both in the Trump administration and past administrations. Many declined to be publicly identified for fear it would endanger their careers and professional relationships.

"The National Security Council staff is comprised of exceptional public servants from across the U.S. Government who are working diligently to support President Trump's highly-effective national security agenda. There is no shortage of patriotic individuals willing to work on these critical issues," said White House press secretary Stephanie Grisham in a statement to NPR.

A senior NSC official dismissed concerns that people don't hold the NSC in the same regard as before. He said Trump has sought to slim down the NSC, so there may not be as many opportunities. The people he knew, though, were proud of their work and extended their assignments.

While an NSC job has historically been known as a launchpad for high-flying careers, these officials tell NPR that under Trump, U.S. foreign policy has become so erratic, confrontational and politicized that many feel out of place — or worse.

Chuck Park, a career Foreign Service officer who served in the Trump administration until July, said getting an NSC job is like a "rocket ship" for your career.

An economic affairs specialist, Park, 34, had pursued an NSC position in 2015 after his third tour of duty but didn't get it. He expected to try again after his fourth, but by then, in 2018, Park said he was too "pissed off and upset" about Trump administration policies such as family separation and the president's rhetoric on immigration. He didn't like what he interpreted as Trump's defense of white nationalism and explained his resignation in an essay published by the Washington Post last month.

The NSC takes top staff members from agencies across the administration, including the State Department, Defense Department, U.S. Agency for International Development and CIA, on temporary assignments.

Those one-year temporary assignments, which are often renewable, are highly coveted, and some of the officials interviewed for this story said they were surprised to learn the lengths the NSC is going to attract staff. Others told NPR that their senior managers discouraged them from accepting NSC positions.

"Going into the NSC is not an easy thing by any means," said Fernando Cutz, who served as a senior director at the NSC in the Trump administration until last year. "You're working all sorts of hours, essentially 24/7. You're either on call or in the office and at times both. And you're not getting paid any more money."

Cutz said working at the NSC was particularly difficult under the brief tenure of Trump's first national security adviser, Michael Flynn, who was under investigation for his ties to Russia. It improved under Flynn's successor, H.R. McMaster, who ran the NSC more along the lines of past administrations by seeking input from around the federal government. 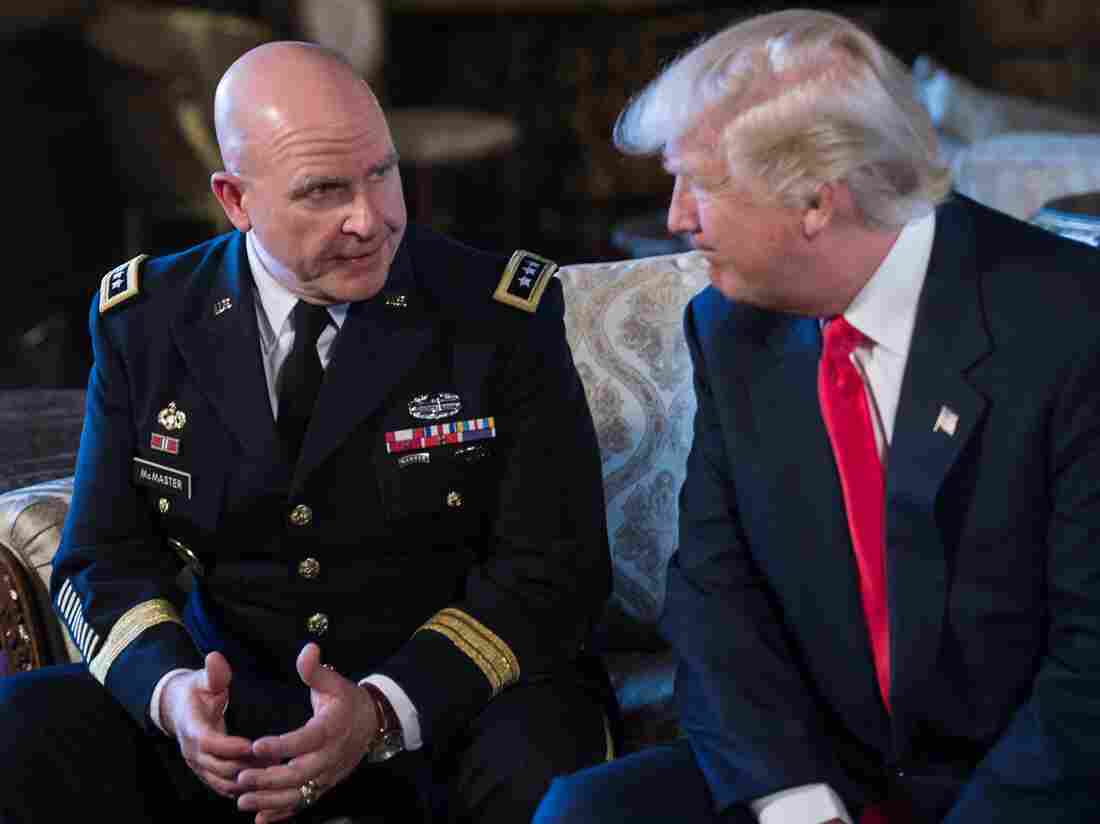 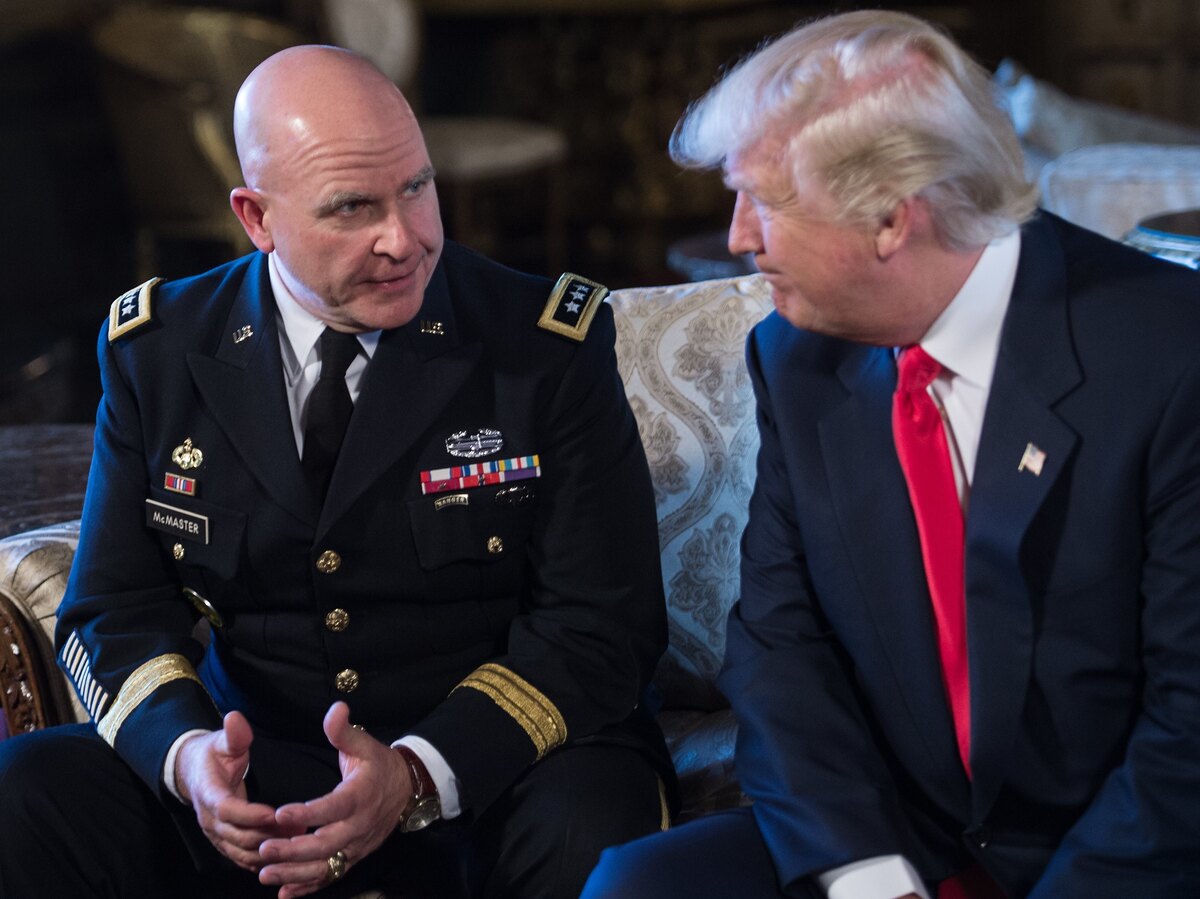 "The staff itself is a really critical piece of this," said Gans. "Because the staff is a big part of the national security adviser's strength. If he doesn't have that sort of public reputation, deep relationships with his Cabinet colleagues or a deep relationship with the president, the staff can give the national security adviser a shot. He can get ideas. He can get intelligence. He can get muscle from them to try and drive his ideas through, outflank Cabinet secretaries, do all those kinds of things."

Congress created the NSC through the National Security Act of 1947. The idea was to create a body within the White House to gather and study various viewpoints from the president's cabinet and advisers, to be shared with the president. But critics charged that Bolton failed to live up to his "honest broker" role by limiting debate inside the government.

"You're really doing it out of a love of your country, out of a sense of patriotism and out of a belief in the system. When that system isn't necessarily working the way that it's designed to work, that has to give you extra pause," Cutz said. "Are you prepared to dedicate essentially your entire life to a system that isn't going to actually respect you?"

Several current and former officials described the challenge of coming up with policies that could match the president's words.

They pointed to being pressed to find military options in Venezuela despite a near consensus among senior leaders of opposition to military action. They cited Trump's lack of interest in intelligence information, particularly on Russia. And they also talked about Trump's willingness to ignore advice from foreign policy professionals.

Others cited the president's braggadocio and said his language and style haven't helped secure foreign policy wins on trade or headed off Iran's nuclear ambitions.

Many senior-level NSC staffers are trying "either to go overseas and to ride out the administration or to find jobs in the department that are detailed to other places," said Brett Bruen, who served as the White House director of global engagement in the Obama administration and remains in contact with NSC and State Department officials. "Basically, anything that you can get to avoid having to be in a serious policy job, which is almost a 180 from the way those jobs were looked at beforehand."

Some of the current and former officials interviewed for this story blame Bolton for installing too many political appointees and eliminating much of the coordination with other parts of the government. A request for a comment from Bolton was declined.

But others say even before Bolton became national security adviser, Trump had already undercut the NSC's relevance in shaping policy positions, eschewing the advice of top officials in favor of his own gut instincts.

"It's a great job. It's great because it's a lot of fun to work with Donald Trump," Trump said. "And it's very easy, actually, to work with me. You know why it's easy? Because I make all the decisions. They don't have to work."

After announcing on Wednesday that O'Brien would be his new national security adviser, Trump downplayed his previous comments, saying the position is "a very important role. It's really a role that if the president respects the person that's the adviser, I think it really plays an important role."

The senior NSC official said the NSC continues to attract some of the most talented people in the federal government. Staffers seek to stay away from politics. He said they are proud of the work done in the Middle East, reducing tensions with North Korea and bringing home U.S. hostages from abroad.

"People come here because they believe in the policies they work on," the official said. "It's not a highly political place."

Another senior administration official who wasn't authorized to speak publicly dismissed the concerns and said the NSC sometimes asks for volunteers and sometimes it hand-picks candidates.

Other officials who worked with Bolton said that he's wrongly being blamed as the main problem at the NSC — and that while Bolton curtailed coordination with other parts of the government, it eased the workload and he wasn't personally difficult.

"He wasn't some jerk or anything like that," said one former NSC official. "He wasn't tough on the staff. He was very nice to all of us. He was approachable."

Like in many parts of the federal government, there's a long tradition at the NSC of top civil servants and Foreign Service officers being dedicated to carrying out the current administration's priorities, regardless of which party is in power. 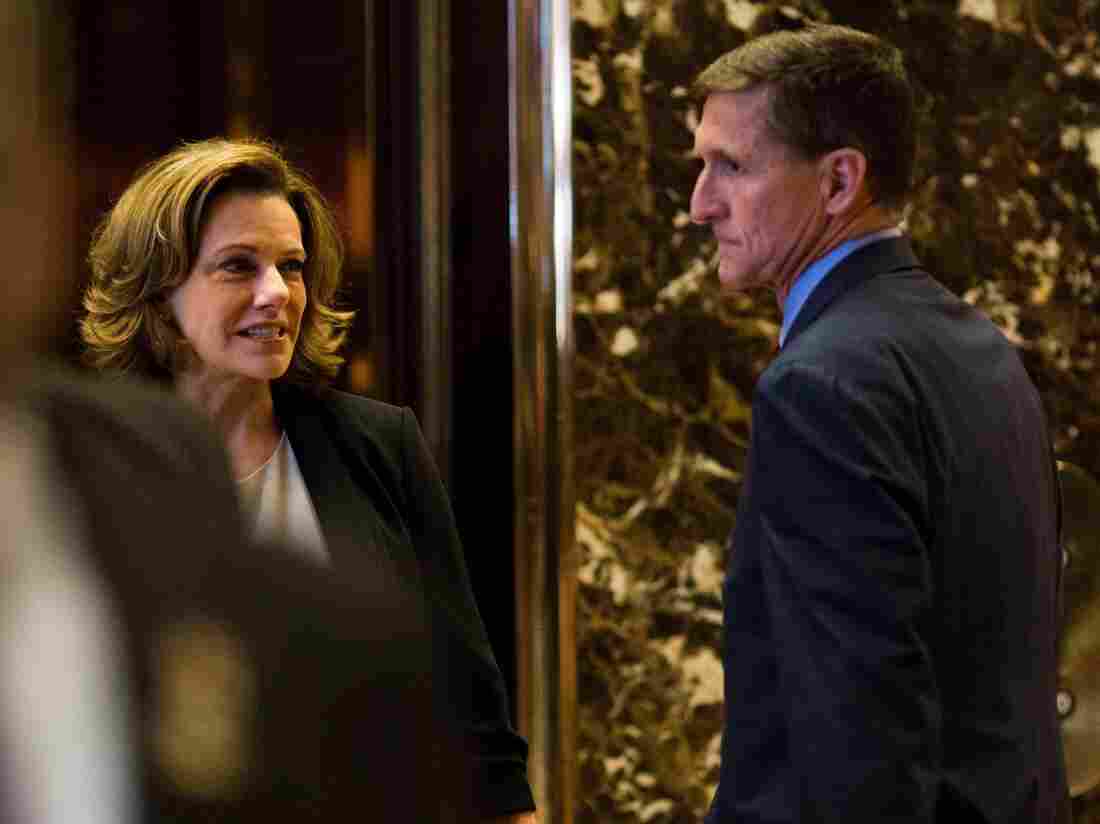 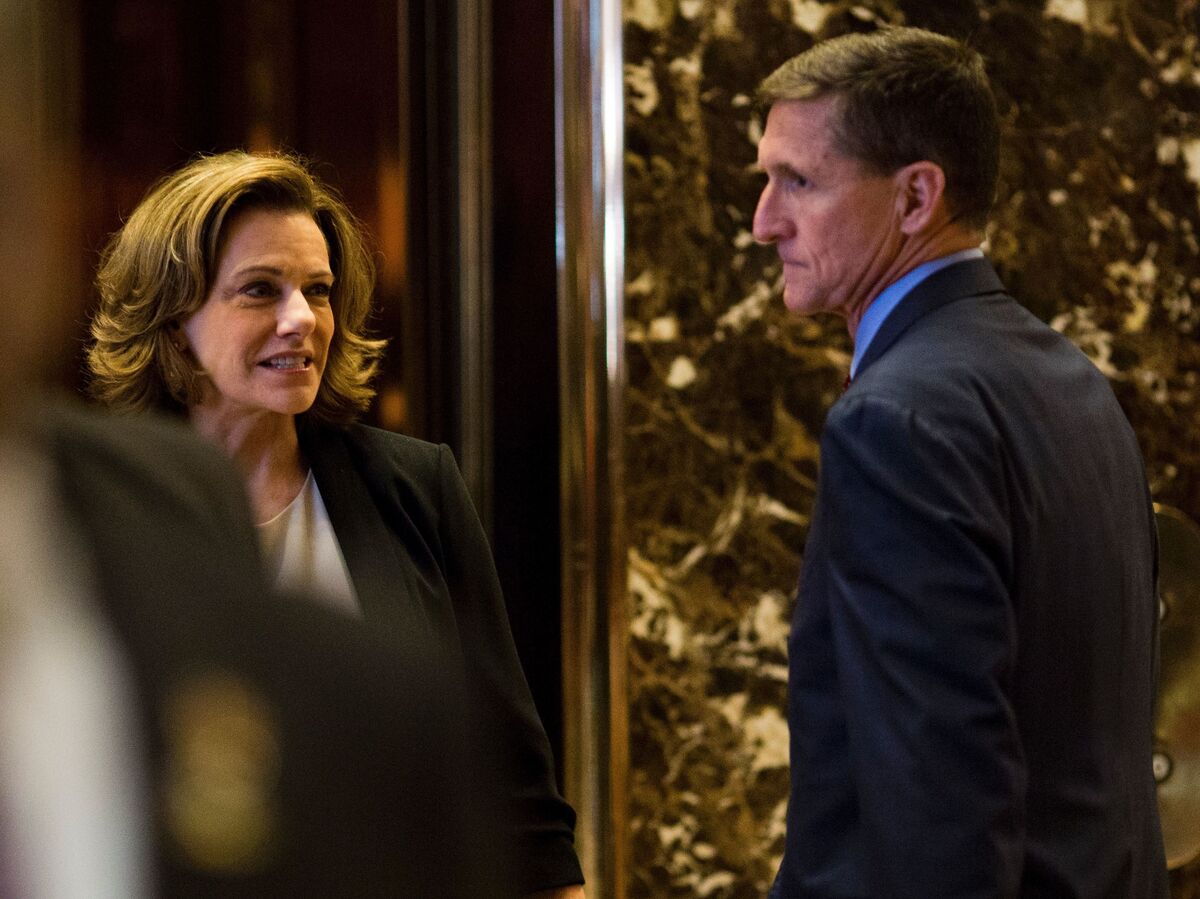 Several officials told NPR they joined the administration because they were asked to protect U.S. national interests. Some were worried about controversial figures like former National Security Adviser Michael Flynn, his deputy, K.T. McFarland, and former NSC spokesman Michael Anton, who were part of the NSC in the first months of the Trump administration.

Flynn pleaded guilty to making false statements to the FBI. Before joining the Trump administration, McFarland's most recent national security experience had been as a Fox News analyst. Anton was best known as a conservative polemicist with limited past foreign policy experience.

Several Foreign Service officers told NPR they struggled with other Trump administration policies that they had no role in shaping.

"You may not be working on putting kids in cages, but you can't get away from it," said a former White House official who served in the Trump administration until last year. "You are literally part of the administration responsible. And if you can't compartmentalize, it's a very difficult emotional cross to bear."

Some turned to professional counseling for help as they wrestled over emotions of whether they were protecting U.S. interests or enabling bad behavior.

One veteran Foreign Service officer who served under multiple administrations, including the Trump administration, said there is now an unspoken belief among some top career officials that it's important to preserve talent for future administrations by keeping them away from assignments too closely tied to the White House.

'I Wasn't Naive': Getting Fired In The Trump Administration

"You've got a really bright-eyed, bushy-tailed person, like somebody who you know can go far in this business — you're not going to want them to get mowed down," the Foreign Service officer said. "And you're going to say, 'They know we all live to serve. But it's really important to be around to fight another day. And you are going to carry the institution going forward. So let's go hide you.' "

"This is the kind of position where people take selfies in the Oval Office or they hang pictures of themselves in the Situation Room and display it proudly behind their desk," he said.

But that's not the case anymore, he said.