Accessibility links
Book Review: In 'Savage Gods,' An Author Finds That Pondering Being Leads To An Inability To Write Paul Kingsnorth moved to a small farm in Ireland to be closer to the land and to reconnect with the essence of being. Instead of contentment, he found that it was tough to find meaning in writing.

In 'Savage Gods,' An Author Finds That Pondering Being Leads To An Inability To Write

In 'Savage Gods,' An Author Finds That Pondering Being Leads To An Inability To Write 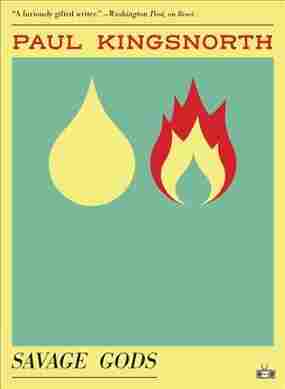 Paul Kingsnorth's Savage Gods is a series of questions in the shape of a book.

On the surface, the writing deals with the author trying to make sense of his need to belong to something meaningful, his desire to connect with an older reality tied to the earth. Right underneath that, however, are a series of other questions that wriggle around like termites inside the wood of Kingsnorth's heart: What does it mean to belong? Can we connect to culture in a world where there is none? Can words truly communicate life?

Kingsnorth, a writer, thinker, and environmentalist, left his home in the United Kingdom behind and moved to a small farm in Ireland with his wife and two children. He wanted to be closer to the land. He wanted to reconnect with the essence of being and, in the process, try to find some sense of contentment away from the world he knew. Instead of contentment, he found something devastating: the realization that he could no longer write like he used to. He was constantly haunted by questions that shook him to the core, questions that cut to the core of the uselessness of language, the role of storytelling in written form, and the inability of writers to approach anything close to the truth nature offers to those willing to sit still, accept they know nothing, and observe.

Despite the questions that haunted him, Kingsnorth is a writer, and that means he had to keep writing. Savage Gods is the result of his grappling with the thoughts that came in the wake of his failed attempt to grow roots after years of rootlessness. Not finding contentment meant he found what lacking contentment signified for him as a writer. That knowledge is at the core of Savage Gods — and is a revelation all writers must take to heart:

"You need always to be under pressure, like a layer of sedimentary rock or a steel girder holding up a skyscraper. From the pressure, from the pain of the contradictions you carry and embody, from the wrenching of the oppositions that tear you, comes the energy that bursts into words, comes the flood, comes the pouring. You must always be not quite where you want to be, and you must never quite know where you want to be, and nothing must ever be enough to bring you contentment. Contentment is your deadliest foe. The fruit must always be just out of reach, and the world you walk through must always be a shade greyer than the one you can make yourself from what lives hidden in your heart."

Savage Gods enters into a conversation with poets, novelists, philosophers, primitivists, and academics. Kingsnorth uses their work to make sense of his own ideas and to explore our need to connect with something bigger, to belong to something far older than ourselves. His attempt to find that ineffable thing turned into this book, and the book makes a powerful statement: His failure to find something ancient and profound to belong to while working the land came about because there is nothing left to belong to:

"I walk the world looking for something to belong to, but there is nothing to belong to because there is no culture for us anymore, only civilization, and they are not the same thing. There is no connection between the wild and the tame, the human and the beyond-human, the sacred and the profane. In the world I was born in, Eros and Psyche have gone their separate ways, and now my words are eating themselves alive."

Ultimately, Savage Gods is a beautiful, intelligent, extremely poetic book about a writer dissecting his thoughts and feelings on the page without the protective layer of fiction. Kingsnorth knows he's good with words and understand he's lucky to make a living as a writer, but he also accepts the many shortcomings of the language he uses as his main tool:

"Could I write like a tree would write, like a river would write, like an air current under a swallow's wing, the head of a plantain in the south of the field, a sycamore leaf falling to the ground in early autumn? Could I sing the mathematics of it all in poems and watch them dance away and be lost beneath the umber loam? Could I write like a myth, like an intuition, like an animal hunting, a cloud skimming, could I write from the shores of the boiling lake, is there truth down there and can it ever be planted in symbols on a page?"

The answer to this question is here, but it's not spelled out. The answer, like all profound truths, has to be pulled from the pages the same way we try to pull truths from nature: by sitting still, staying quiet, embracing our ignorance, abandoning our opinions, and paying attention.