Accessibility links
Saudi Arabia Says Iran 'Unquestionably Sponsored' Attack On Oil Facilities "This attack did not originate from Yemen despite Iran's best efforts to appear so," said Saudi Col. Turki al-Malki. U.S. Secretary of State Mike Pompeo called it an "act of war" against the kingdom. 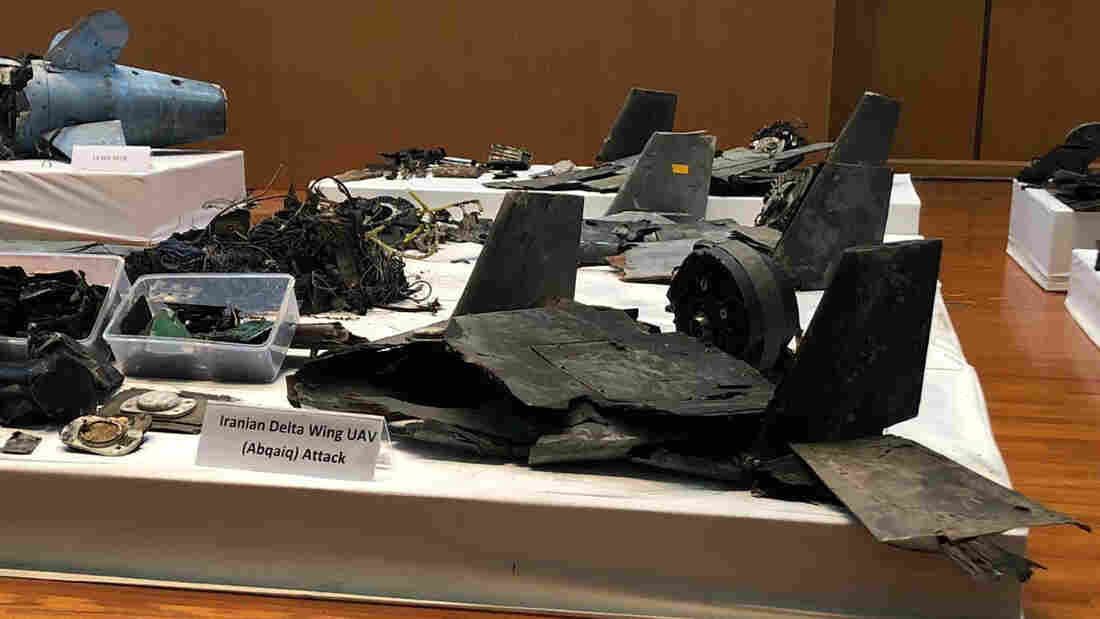 Saudi Arabia's military displays what it says is wreckage from drones and cruise missiles used to attack Saudi Aramco oil facilities. A Saudi spokesman says the weapons did not come from Yemen, as a rebel group has claimed, but from Iran. Vivian Nereim/Bloomberg via Getty Images hide caption 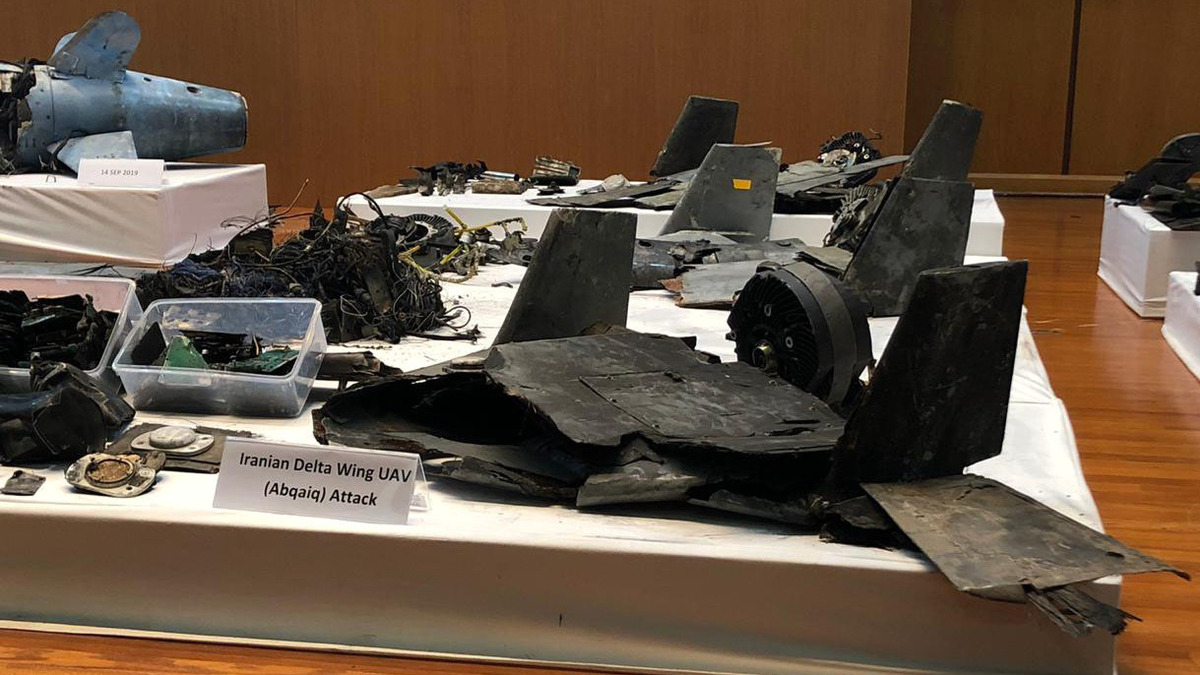 Saudi Arabia's military displays what it says is wreckage from drones and cruise missiles used to attack Saudi Aramco oil facilities. A Saudi spokesman says the weapons did not come from Yemen, as a rebel group has claimed, but from Iran.

Saudi Arabia's military displayed pieces of missiles and drones Wednesday, saying the wreckage is proof that the recent attack that crippled Saudi oil production was "unquestionably" sponsored by Iran.

At a news conference in Riyadh, the capital, a Saudi military spokesman, Col. Turki al-Malki, said Saturday's strike came from the north — not from Yemen, where Houthi rebels have claimed responsibility for the attack. Both Iran and Iraq are to the north of Saudi Arabia.

"This attack did not originate from Yemen," Malki said, "despite Iran's best efforts to appear so." He accused Iran of working with its Houthi allies to generate a "false narrative" around the strike on two oil facilities.

"Secondly, the attack was launched from the north," Malki said, "and was unquestionably sponsored by Iran."

Pompeo blamed Tehran for the attack, calling it "an act of war" against the kingdom. "The Saudis were the nation that was attacked," he said. "It was on their soil. It was an act of war against them directly."

President Trump has said that while the U.S. is ready for war, he wants to avoid it. On Wednesday, he announced that he had ordered the Treasury Department to "substantially increase" sanctions on Iran, and he later said details would be announced in the next 48 hours.

Iran has insisted that it had nothing to do with the attack that knocked out more than half of Saudi Arabia's oil-exporting capability. On Wednesday, Iran's defense minister, Brig. Gen. Amir Hatami, reiterated that denial, saying, "These accusations are wholly, seriously and firmly rejected. It's easy to accuse someone without providing any proof."

As Malki sought to provide that proof, he said the drones and cruise missiles used against Saudi Arabia had originally come from Iran. He added that some of the weapons deployed don't have sufficient range to fly from rebel-held areas in Yemen to the targets in Saudi Arabia.

But the spokesman stopped short of directly accusing Iran of launching the attack from its own soil — something recently implied by U.S. officials. On Tuesday, two Defense Department officials told NPR that U.S. spy satellites had spotted drones and missiles being prepared at sites in Iran prior to Saturday's attack, which they called "circumstantial evidence" that Iran had launched the strike from inside its borders.

Malki described the attack as part of a pattern of Iranian aggression.

"This attack was not against the kingdom [of Saudi Arabia]," Malki said. "It was an assault to the international community — an elaborate attempt to disrupt the global economy and the energy industry."

Speaking before a large international contingent of journalists and diplomats, Malki said a total of 25 drones and missiles struck the Abqaiq processing plant and Khurais oil field on Saturday.

"The direction of the attack is coming from the north," Malki said, as a large screen showed images of impact points at the Abqaiq facility. He also showed what he said were surveillance videos from the early morning hours that showed the weapons approaching from the north. 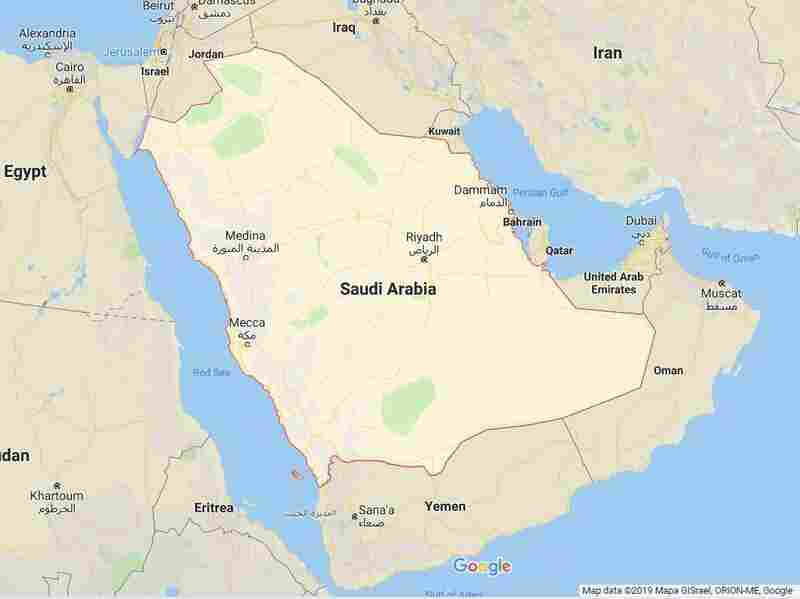 Saudi Arabia's military says the drones and cruise missiles that hit Saudi oil facilities over the weekend were launched from the north, not the south — where Yemeni rebels have claimed the attack. Google/Screenshot by NPR hide caption 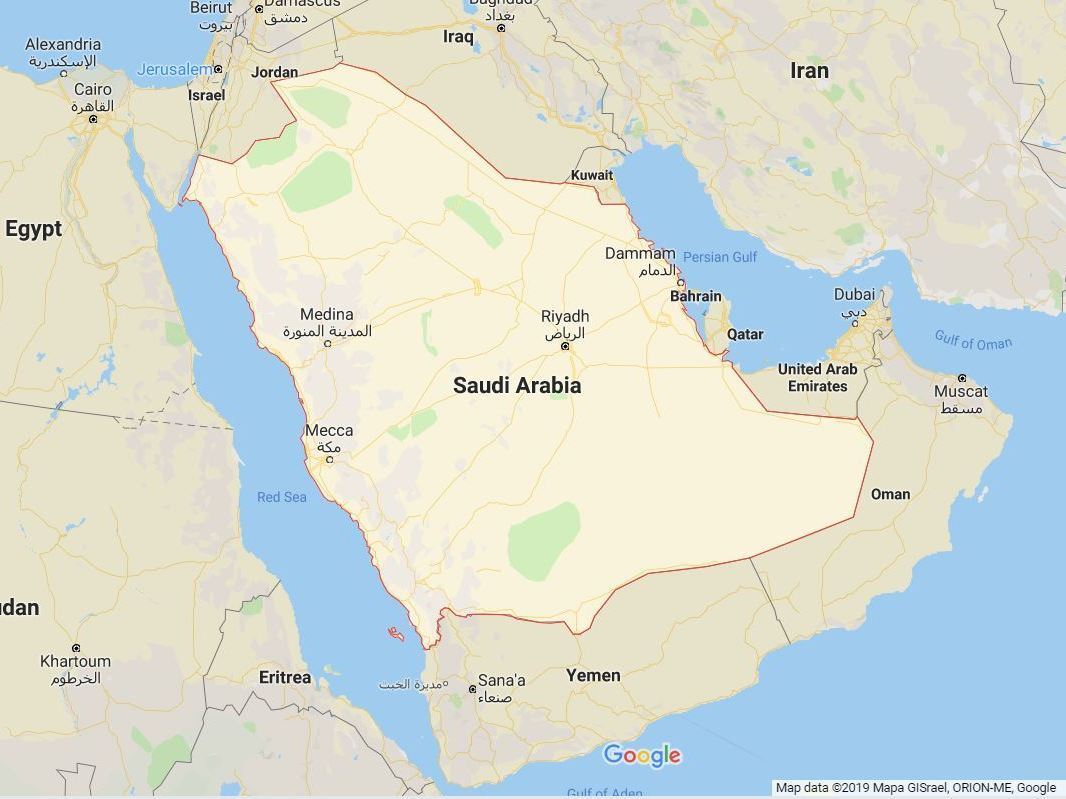 Saudi Arabia's military says the drones and cruise missiles that hit Saudi oil facilities over the weekend were launched from the north, not the south — where Yemeni rebels have claimed the attack.

Standing amid tables where rows of scorched and fragmented drone and missile wreckage had been laid out, Malki said, "This is the kind of weapon the Iranian regime and Iranian [Revolutionary Guards Corps], they are using" against civilian targets.

He said the weapons ranged from an Iranian delta-wing unmanned aerial vehicle to Ya Ali cruise missiles.

The cruise missile resembles a small Iranian-derived design known as the Quds 1, according to Fabian Hinz, a research associate at the James Martin Center for Nonproliferation Studies in Monterey, Calif.

And Adam Rawnsley, a reporter with The Daily Beast who closely tracks drone technology, quickly identified the delta-wing drones arrayed at the news conference as being Iranian in origin.

Saudi Arabia has rushed to restore capacity to its oil infrastructure, pledging to fulfill orders despite the attacks.

On Tuesday, Saudi Aramco President and CEO Amin Nasser said the company plans to restore production to full capacity by the end of the month. "These synchronized attacks were timed to create maximum damage to our facilities and operations," Nasser said at a news conference in Jiddah.