Accessibility links
Frank Lloyd Wright, But DIY: A Rare 'Usonian Automatic' House Is For Sale The famed architect conceived a number of dwellings for the mass market to be made from concrete blocks. The idea never took off. But in New Hampshire, one such building is now hitting the market.

The famed architect conceived a number of dwellings for the mass market to be made from concrete blocks. The idea never took off. But in New Hampshire, one such building is now hitting the market. 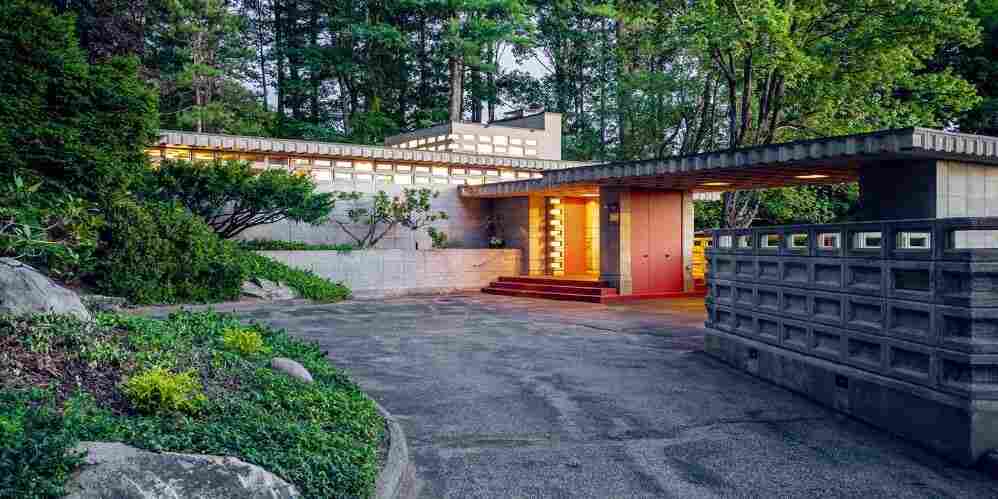 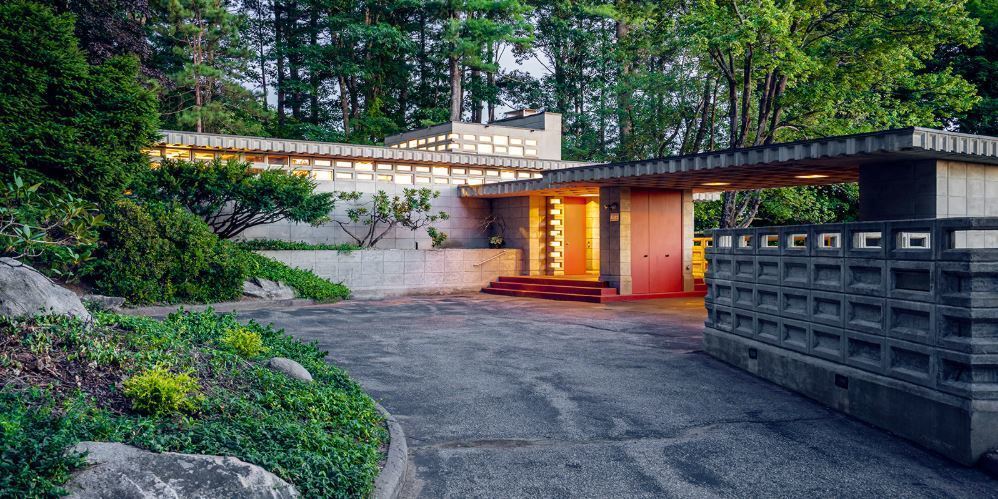 The Toufic H. Kalil house in Manchester, N.H. is one of only seven Usonian Automatic buildings ever constructed.

The architect Frank Lloyd Wright is famous for his masterpieces of design - the spiral climb of the Guggenheim Museum, Fallingwater, a home delicately perched over a waterfall. But Wright also tried to bring good design to the masses, to let people build their own homes. New Hampshire Public Radio's Todd Bookman says it didn't quite work out.

TODD BOOKMAN, BYLINE: In a quiet neighborhood in Manchester, N.H., there are not one, but two Frank Lloyd Wright houses on the same street. It's the result of one family, the Kalils, being inspired by another family, the Zimmermans.

STEVEN KALIL: When my Uncle Toufiq saw what Zimmy (ph) was doing with his new house, he was intrigued and got excited about it and several years later approached, you know, Wright himself.

BOOKMAN: That is Steven Kalil. His Uncle Toufiq and Aunt Mildred commissioned their own Frank Lloyd Wright house in 1955. They wanted something like their friends the Zimmerman's house - low slung with brick and wood.

KALIL: And I think they were surprised when they saw it because they were expecting that and saw this. And they were like, whoa.

BOOKMAN: Frank Lloyd Wright called what he designed for the Kalils a Usonian Automatic house. Steve Kalil gave me a tour of the 1,500 square-foot home.

KALIL: This is the master bedroom.

BOOKMAN: The Usonian Automatics are constructed out of stacked grey concrete rectangles. The Kalil house has something like 48,000 individually cast blocks, reinforced with rebar. They make up the walls and ceiling.

BOOKMAN: The concrete gives Usonian Automatics a solid feel, a heft. But that's offset in the interior by walls lined with mahogany. And the living room of the Kalil house is composed of concrete and glass squares, 350 individual windows. It cost the Kalils $70,000 to build it in 1955, not a small sum. Wright's vision with the Automatics, though, was that the buyer could perhaps save money by constructing the home themselves - pour and stack their own concrete blocks.

BOOKMAN: Wright himself made that preference clear. Here he is in 1952 addressing the American Institute of Architects.

FRANK LLOYD WRIGHT: And I believe there is no more rewarding effort in life than just that - trying to make what you do, how you do it, beautiful.

BOOKMAN: Building your own Usonian Automatic home didn't catch on. It was harder to do than Wright may have thought. Today there are only seven of them in the U.S., including the Kalil house in Manchester. It still has its original stove and oven and Wright-designed furniture and upholstery.

KALIL: Really what's special about this is it's a time capsule.

BOOKMAN: Steve's uncle Toufiq lived here through 1990. Then Toufiq's younger brother John moved in. It was his home until last year, when he died at the age of 101. No other relatives are interested in moving in. So next month, it's going up for sale.

BOOKMAN: Did you consider keeping it in the family?

BOOKMAN: With an asking price of $850,000, this Usonian Automatic isn't exactly in reach for the masses. But at least you don't have to build it yourself. For NPR News, I'm Todd Bookman.