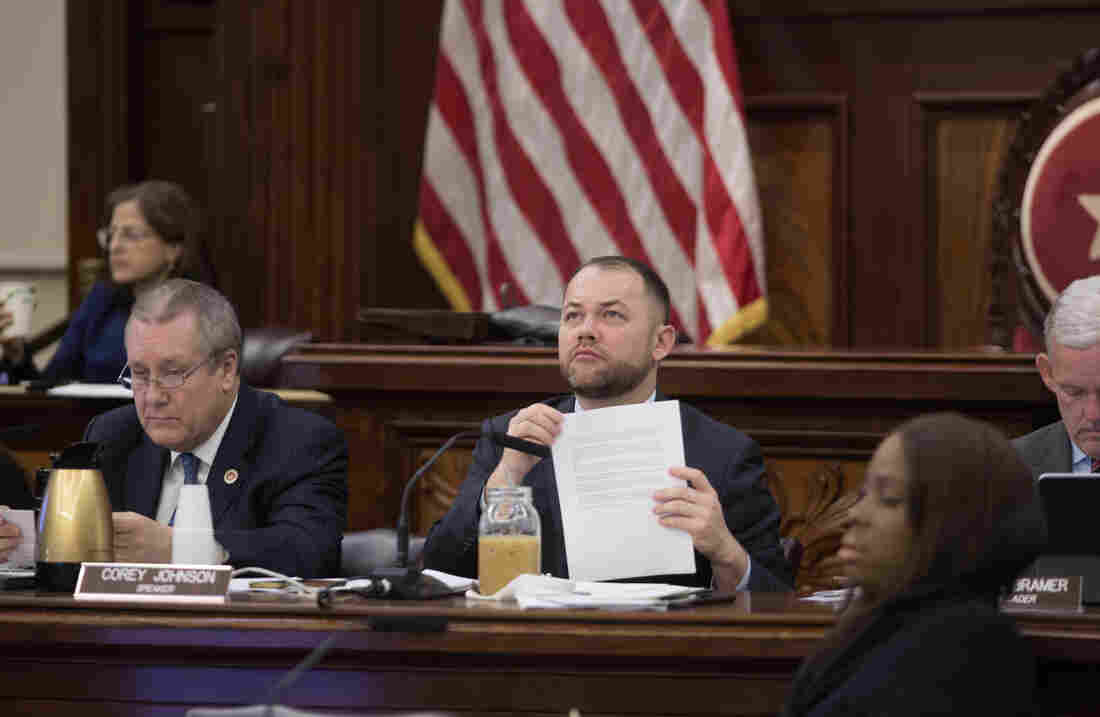 New York City Council speaker Corey Johnson, shown here at a New York hearing in January, said last week that he had struggled with the proposal to repeal the ban, but "ultimately, I think this is the responsible, strategic and right thing to do." Andrew Lichtenstein/Corbis via Getty Images hide caption

The New York City Council is considering a repeal of a 2017 law that banned conversion therapy, the strongly-condemned practice of attempting to change a person's sexual orientation or gender.

It's a confusing legal maneuver that advocates say won't erode any protections for LGBT New Yorkers and at the same time, will ward off a looming lawsuit that could have negative implications nationwide if the courts side against the city. Members of the City Council heard testimony by several LGBT advocacy groups which all support the ban's repeal at a public hearing Wednesday.

"It makes no sense to waste time and resources on a lawsuit, which always presents some risk of loss," testified Eric Lesh, the executive director of the LGBT Bar Association of New York. "While we believe the law is valid, it is no longer needed, and a loss could needlessly jeopardize other laws."

The proposal to repeal the city's ban on conversion therapy was introduced by City Council Speaker Corey Johnson, who is gay.

"I really struggled with it because I don't want to look like we're retreating in the face of an organization that brought this lawsuit that has been deemed a hate group by the Southern Poverty Law Center," he said at a press conference last week. "Ultimately, I think this is the responsible, strategic and right thing to do."

Johnson was referring to Alliance Defending Freedom, a national group that regularly challenges abortion laws and LGBT protections on freedom of speech and religious grounds, most recently, the Masterpiece Cakeshop case, where a baker didn't want to make a wedding cake for a gay couple.

Roger Brooks, an attorney for Alliance Defending Freedom, dismissed the SPLC's "hate group" characterization as "political mudslinging from a group that has a lot of troubles of its own," and pointed to nine cases in recent years the ADF argued before the Supreme Court and won. "If the Supreme Court always agrees with you, that's a mark of being right down the middle. That's not a mark of hate or extremism," Brooks said.

In January, the group sued New York City over its 2017 ban on conversion therapy on behalf of David Schwartz, a Brooklyn psychotherapist, arguing his constitutional right to freedom of speech was being violated.

In the months since the lawsuit was filed, the same advocacy groups that petitioned the city to pass its conversion therapy ban, urged city officials to walk it back. That's because, since New York City passed its law, circumstances have changed significantly.

Earlier this year, Democrats took control of the state Senate and one of their first orders of business was to pass long-stalled protections for LGBT people, which included banning licensed professionals from using conversion therapy on children. That means if New York City repeals its law, children are still protected under state statute, though religious leaders and other non-licensed persons aren't strictly prohibited from engaging in conversion therapy.

On top of that, adults can still bring lawsuits under state and city laws that protect consumers against fraud, said Shannon Minter, the legal director at the National Center for Lesbian Rights.

"From a purely legal perspective it doesn't actually create any new protections or rights," Minter said. "Which is why it makes so much sense for the city to do what it's doing. It just does not make sense to divert resources and money to fighting [for] a law that we don't need."

A Conversion Therapy Program Founder Comes Out — And Apologizes

A Conversion Therapy Program Founder Comes Out — And Apologizes

If New York City goes through with its repeal, the only change would essentially be that the city could no longer levy fines against practitioners who receive payment for conversion therapy, though a spokeswoman for the city's Department of Consumer Affairs said in the two years since the law was enacted, not a single person had been fined, because no one had filed a complaint.

Medical authorities have warned against the harms of conversion therapy for years, particularly on children. A 2009 report from the American Psychological Association found these types of therapies are "unlikely to be successful and involve some risk of harm."

More recent studies have found that conversion therapy dramatically increases the risk of suicide attempts and psychological distress among children and adults subjected to it. It's been denounced by the American Psychiatric Association and the American Psychological Association, which both point out conversion therapy is predicated on the misinformed notion that homosexuality is a mental disorder.

Estimates from UCLA's Williams Institute suggest around 698,000 LGBT adults have received conversion therapy, about half of whom were put through it as children.

"I was separated from my mother and sisters for three years. I was not allowed to speak to any females so that I understood the role of females and males," Mathew Shurka, a conversion therapy survivor, testified at the Wednesday hearing, also in support of the city's move to repeal the ban.

He's the co-founder of Born Perfect, a legal campaign to get the practice banned nationwide. "The irreversible harm done to me and my family, as a 31-year-old now is ... something I'm still recovering from, and I deal with every day."

Brooks, with the Alliance Defending Freedom, said his client David Schwartz doesn't only practice conversion therapy, but treats patients for a variety of issues. He said if consenting adults come to Schwartz he won't turn them away.

"He makes no promises to any patients about outcomes, he doesn't advertise at all. But he has seen motivated patients who come in, wanting change, succeed in that," Brooks said.

He took the city's move to upend the 2017 law as good news for his client.

"If the city is coming to the conclusion that we started with, that the law is unconstitutional...if the city repeals it, then that's the right step and we commend it," he said. "We'd be very pleased on behalf of Dr. Schwartz and protection of free speech generally."

New York's City Council is expected to vote on lifting the ban in the coming weeks.