Accessibility links
U.S. Quandary On Response To Airstrikes Against Saudi Oil Facilities Military and intelligence officials say it looks like Iran launched the airstrikes but the U.S. has been slow to respond. 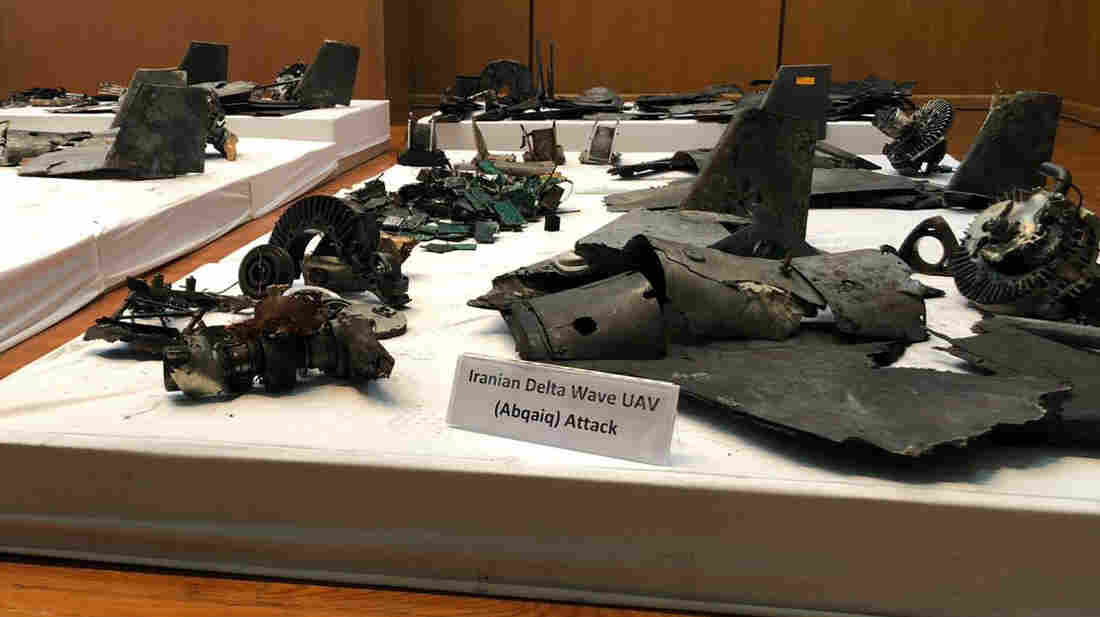 Wreckage described by Saudi defense officials as coming from the airstrikes on the Abqaiq oil refinery. Bloomberg via Getty Images hide caption 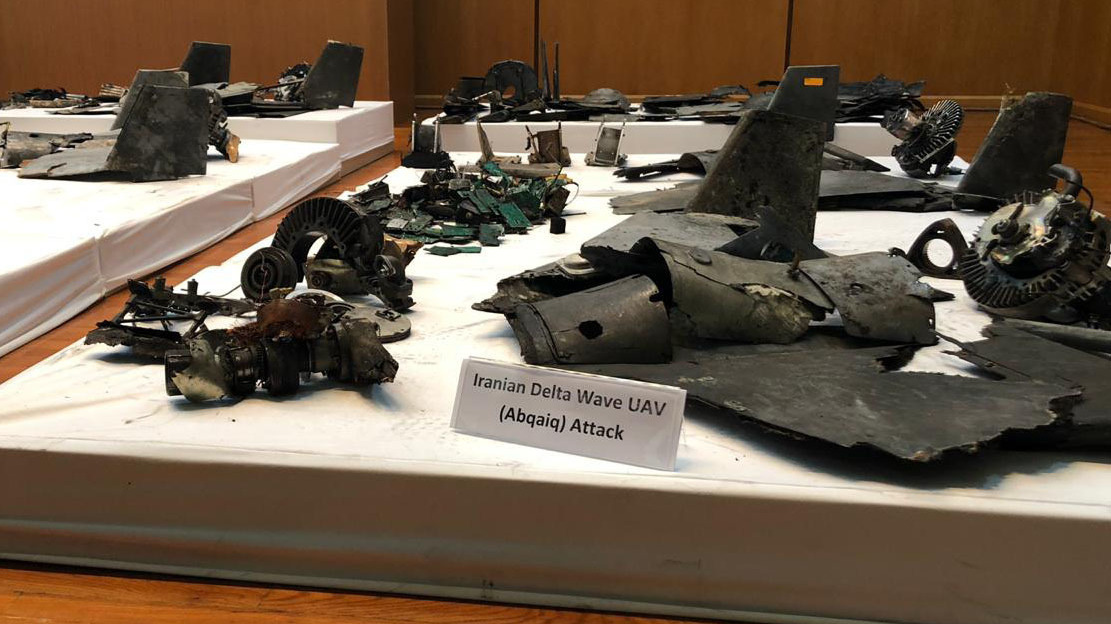 Wreckage described by Saudi defense officials as coming from the airstrikes on the Abqaiq oil refinery.

American military and intelligence officials say they are accumulating a growing mound of evidence that Iran launched the airstrikes that idled about half of Saudi Arabia's oil production capacity over the weekend. But the Trump administration has been slow to respond to those attacks.

President Trump encapsulated that ambivalence in a tweet Monday. "There is reason to believe that we know the culprit, are locked and loaded depending on verification," Trump threatened, only to immediately raise doubts about his intentions by continuing, "but are waiting to hear from the Kingdom as to who they believe was the cause of this attack, and under what terms we would proceed!"

Possible courses of action range from retaliatory military strikes to further economic sanctions to sitting down for diplomatic talks with Iran.

Five days after the attack, which crippled the world's largest crude oil processing facility as well as a Saudi oil field, Trump settled on broadened economic sanctions on Iran for an initial response. He did so two hours before Saudi officials publicly displayed debris from drones and missiles which they asserted was "undeniable" evidence the attack was sponsored by Iran.

"I have just instructed the Secretary of the Treasury," Trump declared, "to substantially increase Sanctions on the country of Iran!"

Trump provided no details about what those additional sanctions might entail. His administration reimposed sanctions on Iran in April 2018 upon withdrawing from the 2015 multinational accord aimed at curbing that nation's nuclear weapons program.

Those U.S. sanctions, which also threaten reprisals against firms doing business with Iran, have shriveled that nation's oil exports from 2.5 million to 500,000 barrels of oil a day. China buys most of that smuggled oil.

One expert with considerable experience in sanction regimes on Iran says there's little chance most U.S. allies would endorse additional sanctions. "It would be a lot easier to rally the world together if the U.S. hadn't taken the first step by reimposing sanctions that nobody agreed to, with the exception of the Israelis, the Saudis and the Emiratis," says Richard Nephew, who was the lead sanctions expert on the U.S. team that negotiated the Iran nuclear deal. "I really do fear that U.S. words are falling on deaf ears, that people are going to hear about disruptions to international oil supplies and say, 'Yeah, but who started this?' And that's the kind of argumentation that's deeply unhelpful if you're trying to rally the international community together."

Iran denies carrying out the attack on the Saudi oil facilities, for which Iranian-backed Houthi rebels in Yemen are claiming credit.

As part of a "maximum pressure" campaign against Iran, the U.S. terminated waivers in May that allowed some nations, including China, to import Iranian oil. Since then, Iran has been blamed for a series of attacks on oil tankers and American drones in the Persian Gulf.

The military response to tightened sanctions comes as no surprise to those sympathetic to Iran's plight.

"Basically Iran's back is against the wall with the economic warfare waged by the U.S. and its regional allies wreaking havoc on the Iranian economy," says Kaveh Afrasiabi, an Iranian-American political scientist who has taught at the University of Tehran and advised Iran's nuclear negotiators. "The whole U.S. strategy has been based on a fallacious assumption that Iran will cave in to the pressures and heed the exaggerated, unreasonable demands set forth by (U.S. Secretary of State Mike) Pompeo."

Iran's leaders may feel more emboldened by how Washington has responded to earlier provocations. Iran watchers point to a U.S. airstrike in reprisal for Iran shooting down a U.S. drone being called off at the last minute in June by Trump. "When the U.S. did not do that, then I think the Iranians understood that Trump would not do something that would risk his re-election," says Barbara Slavin, director of the Future of Iran Initiative at the Atlantic Council.

"The question of whether or not Iran is deterred from taking action I think is very much open," adds Nephew. "I think it would not be unreasonable for the Iranians to think that Trump is unwilling to act, no matter what he says."

Sen. Lindsey Graham, R-S.C., usually a staunch Trump supporter, also pointed to the president's cancellation of the June airstrike as pivotal. "The measured response by President @realDonaldTrump regarding the shooting down of an American drone," Graham tweeted on Tuesday, "was clearly seen by the Iranian regime as a sign of weakness."

"No, Lindsey," Trump tweeted in response, "it was a sign of strength that some people just don't understand."

Speaking to reporters in Los Angeles on Wednesday, Trump suggested they query Graham on how previous U.S. military interventions in the region had gone. "Ask him how did going into the Middle East, how did that work out, and how did going into Iraq work out," said Trump, who promised to end U.S. involvement in such conflicts while campaigning on an "America First" platform.

Still, Trump continues brandishing the use of military force against Iran. "If we have to do something," he said in that same exchange with reporters, "we'll do it without hesitation."

U.S. military leaders have laid out options for reprisals against Iran, ranging from airstrikes against its oil facilities to cyber sabotage.

But there appears to be scant enthusiasm at the Pentagon for an armed response.

Military officials say an attack on Iran could come at a high price for the 5,000 U.S. forces stationed in Iran's ally, neighboring Iraq. Popular Mobilization Forces, as pro-Iran armed militias are known in Iraq, could take a heavy toll retaliating against those American troops. U.S. warships in the Persian Gulf — many of them docked in Bahrain, home to the U.S. Navy's Fifth Fleet — would be vulnerable to reprisals from Iranian naval vessels as well as missiles and drones.

The U.S. has no defense treaty with Saudi Arabia, and it's not clear any of its major allies would be willing to join an international coalition for collective military action against Iran.

It's also not clear Saudi Arabia would welcome a potential war with Iran, its longtime rival for regional dominance. "I think the Saudis and the Emiratis understand that escalation in the Persian Gulf is going to come at their expense," says the Atlantic Council's Slavin. "They have no confidence that the Trump administration knows what it's doing in pursuing this 'maximum pressure' campaign against Iran — so why should they give the green light for further escalation?"

Sanctions expert Nephew says Iran is counterpunching U.S. economic pressure by attacking American allies in the region. "They (the Iranians) want our partners to be damaged," he says, "so that we will stop damaging them."

Some are hoping for a diplomatic resolution. Both Trump and Iranian President Hassan Rouhani are due to attend next week's annual United Nations General Assembly meeting in New York City, a potential opening for an unprecedented summit there between the two leaders. "I would not, at this point, completely rule out that possibility," says Afrasiabi, "although the chances of it have been highly diminished."

Others are more pessimistic. "Rouhani's dance card will be very full," says Slavin, "but you will not see Donald Trump's name on it." Were the Iranian president to meet with Trump while the "maximum pressure" sanctions continue to crush Iran, she adds, "he would be pilloried. He would be impeached."

With the bad blood worsening between these two nations that have been foes for nearly four decades, Nephew — who was Director for Iran on the National Security Council during the Obama administration — sees a growing danger of war as Iran restarts its nuclear program and the U.S. further tightens sanctions. "I think that does create a very real risk of an escalation to a military conflict that could happen literally anytime now," he says. "I think there's a number of different scenarios here that go from bad to worse, once you start having bullets actually flying."