Accessibility links
What Celia Cruz Brought With Her It can be tempting to encapsulate Celia Cruz's life with a single phrase: "The Queen of Salsa." But she carried with her a deeper musical history from Cuba than that phrase can encompass.

What She Brought With Her

What She Brought With Her 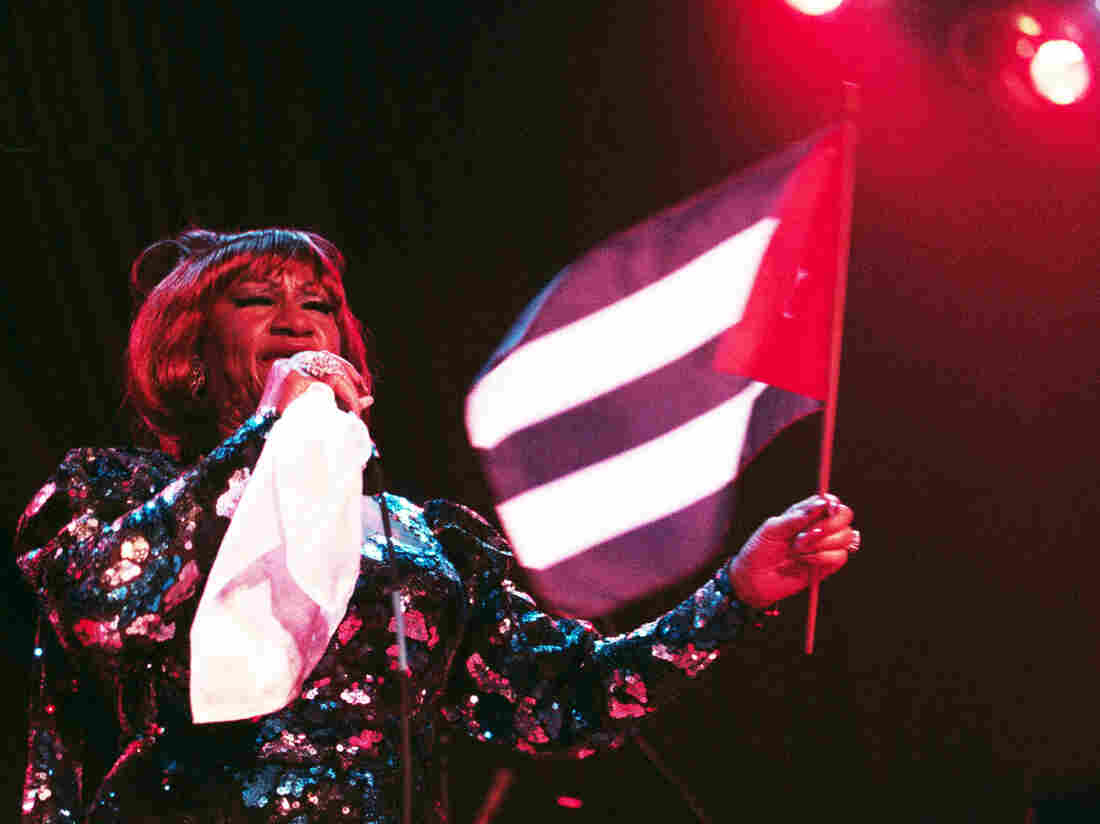 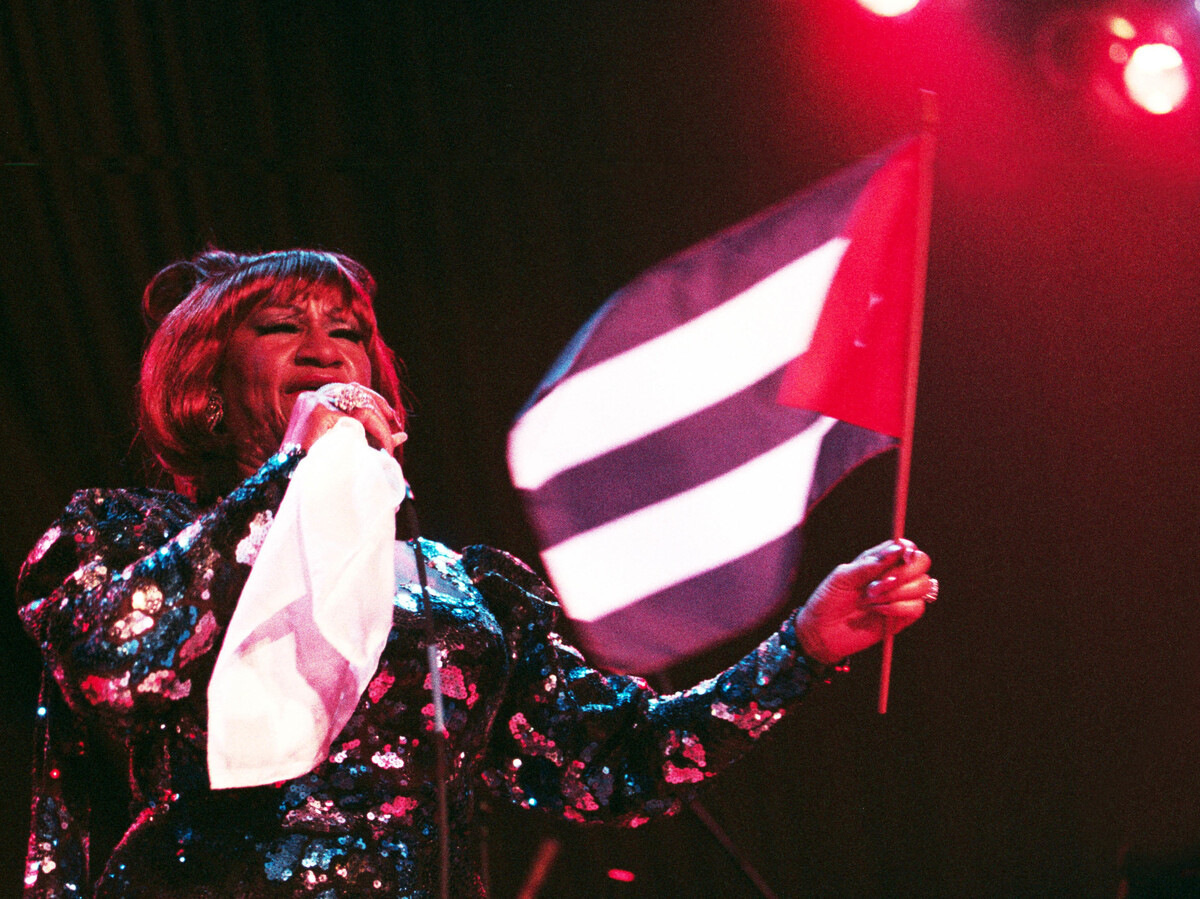 The last time I saw Celia Cruz perform was in Central Park in 2002, one of her final shows, when SummerStage was less managed and thus more exciting. Cruz would often save her signature "Bemba Colora" as the encore an audience had to deserve. Over time it became a relied-upon catharsis for her public to recognize their ancient past and to air their damaged present. On that late afternoon descended an out-of-nowhere, fire-and-brimstone summer thunderstorm. The mighty Celia, at 76 years old and not feeling at all well, refused to waver. She battled out hail, wiring, metallic stagecraft and every possible scenario considered dangerous, and kept singing. It was celestial conjure. The weather wanted to meet her, match her, counterpoint her song. We remained because she remained. We kept dancing while she threw lightning bolts back at the sky.

There is an official recording of the performance where we can't hear all these elements. How wonderful to imagine — or better yet, assume -- that on any recording there is all kinds of stormy material that might escape the ear. To write about women musicians is to dive into the recorded surface while fighting the demand to reveal everything about them in the time and space allotted. Celia Cruz, famously private, has left behind all the biographical data she wanted to tell. Books and essays have been written. Inaccuracies abound. Given the difficult geopolitical contours to her history, many have made an impossible mission to get her record straight. Her dance between the various positions she chose and was forced to embody are made too big a distraction from her hard work in the studio, cabaret, stadium. The work now and going forward is to listen hard to what Celia Cruz didn't, or couldn't tell us outright, but had been singing all along. What was there and what remains all contribute to the truism that it is impossible to write about Cruz without some recourse to the divine.

I have a kaleidoscopic memory, formed over many years, of all those times and places I got to be at the foot of some stage and very close to the hem of Celia Cruz's garments. It was at her feet that so many of us began and begin again to hear her. Her iconic accessories were instructive props, as dazzling as they were comforting. There are worlds of learning in the curved plastic heels of her platform shoes, and her sequined seams held so much life in every performance. Cruz made radiance move in all directions, oftentimes in perfect opposition: brimming upwards while getting down. Celia the rumbera, shifting the soil of the earth, who used the smile and nod as cues for her band and for us, showed what it was like to make difficult aesthetic choices while giving the order, "¡pa' gozar!" Gozar is to enjoy something in a deep-down way, to have a meaty kind of fun, and was one of Cruz's great keywords. Now more than ever, Cruz reminds that we must keep gozar in rotation to interrupt the contemporary ubiquity of menear, which suggests a dancing woman as vacant, wiggling accessory rather than central musical function.

For the sheer magnitude and span of her career, Celia Cruz is an active lesson in the long view. For many girls, to be able to grow up with Cruz is much more than celebrating a singular case of a woman who made it. In life and afterlife Celia tells them that they can get old, and that with the getting old there's a getting better. Her heroic discipline for staying around, active, prescient, meant all manner of experiences were lived while listening to her, with her, as her. For the girls-at-heart made to take up the matriarchal helm too early, the memory of Celia and her music are both examples and symbols that the elders remain fast and strong.

And yet for all her beautiful extension, part of the bungled narrative of Cruz's career is the great cleave that tragically divides her Cuba work from her U.S.-based work. The year is given as 1960 when she left the island. The division for Cruz and so many others was tragic but not a terminus. Writings about Celia can't seem to handle these two halves, or use some version of "spatial constraints," to deaden the complexity of a fragmented life. The unfair overlay of her musical career with oppressive wet blankets of Cold War positions has too often left her exquisite musicianship underexamined and untheorized. (And anyways, her choice to reside in New Jersey, and not Miami or New York, has always been a kind of tell.) Nor can any of this narrative traffic ever quite handle how Cuba has long resided, especially musically, inside the U.S., continually and regardless. A musician's clock should not and cannot be reset upon their arrival to the U.S. To the larger record of women who impact American music, it is not solely a matter of inclusion of the elsewhere born, but to render the U.S. as a middle, or even penultimate stop, to a full musical itinerary.

Let's go to the Cruzian school, to "la vieja guardia" (the old guard) as she used to say right before tucking a classic Cuban recording into her live sets. I turn, on her cue, to the old guard because there is too quick a jump made to Celia, without antecedent, Queen of Salsa. The definition of Salsa — whether made in beloved and/or hostile company — can shift depending on time, location, who's around. It is nevertheless, at its historic core, an entrepreneurial plot that did much to erase the generic complexity of Latinate musics in New York and elsewhere. It instituted a very select personnel of whom Cruz was virtually the only woman let in by its young producers. With a selection from her vieja guardia, we get to hear what she brought with her — and other stormy material that no one could make up or anticipate — to make the '70s salsa heyday swing like it did. But perhaps more importantly and most vitally, we get to listen closely and to spend time with an earlier song over a plentiful repertoire that reminds us that performers come from somewhere, and this affirmation of engaging the past enlivens our present. I invite some homework with one of her recordings made with the bountiful creative laboratory that trained so many great Latina vocalists, the supergroup La Sonora Matancera. Listen to Cruz's take on the Dominican composer Bienvenido Fabián's "Tuya Más Que Tuya" (Yours more than yours), a bolero cha chá recorded in Cuba, and heavily distributed in the United States in 1956.

She sings the following 10 lines, twice:

(English translation)
I don't want to know anything more in life
of caresses that are not yours
I idolize you, life of my life
Every night I dream that you lull me to sleep
And when I wake I feel even more yours
And I bless you, light of my life

How good it is to live when loving so much
It is also to suffer, moan and weep
But it doesn't matter if there's a lot of affection
When you have someone that you adore

I'm yours, and what's more, I'm yours. We are swiftly introduced to some Cuban dexterity with the hyperbolic. The first "yours" doesn't quite get at it. Title and feeling requires a double-down second "yours" to fully mark self for other. Being yours is made expansive, immeasurable — and yet it all occurs in a song that is 2 minutes and 50 seconds long. This song reveals Cruz's magisterial work with the short form. The old kind of short form that held an entire world rather than the current chop and meme. The song is shorter than some voicemails. It showcases Cruz's characteristic vocal determination. It is everything but tentative yet it retains a dulcet secret.

Bolero is the exact thing needed to explain everything publicly but is meant to keep the voracious toggle of amorous intensity and hurt between you and you. There's nowhere for it to go and Cruz knows it. She compresses it all inside the song, even in the real time of recording it for a vast public. The unashamed overamplification of love, of giving possession of the body over to the song's intended, and without the voice bearing any signs of falling apart, announce the grit and guts of Cruz's interpretation. Listen to Cruz's ability to stretch and bend words so that they make otherworldly time inside an imposed time. The upturned last vowels, her gorgeous "r"s, the cascade downwards when talking about life's only true worthwhile activity in a bolero set in a danceable cha chá gives rise to midcentury after-hours as made in Havana and Mexico City and New York. Imagine all that activity for those who were at the clubs, and even more importantly, for those who for various reasons had to stay at home.

Inside the song, it is as if Cruz, though completely unapologetic about it, knows that the whole affair begins to be too much. And so, in a nanosecond decision, the kind of decision that betrays hours of rehearsal, she gives over to Ezequiel "Lino" Frías's piano solo. Voice meets piano in perfect conversant union. And to his eternal credit, Frías meets her there, and incidentally, he may have been one of the few to musically meet her there. In Cruz we hear a preparedness and a pleasure and an overall do-what-you-can in the cramped space that you've got or been given. But for goodness sake (she always seemed to demand) make it tight and right while there! This isn't a voyeuristic thrill in listening, but a respect of how people make-do in music, and a reveal into how — as Gema Corredera once sang it — a bolero can save your life. When the song is over, I hope you can feel (as many of us do), that you have just had a complete experience. The twofold question that lingers on many minds within Cruz's audiences: How does she do it? And what ride do we all agree to take when we listen to her?

This is just one song inside Cruz's complete repertoire, a basket of pearls, one pearl where we may find her complete repertoire. In "Tuya Más Que Tuya" we can hear her preparedness for everything else to come. It is a song that reminds us that Celia Cruz was one person with robust histories, and through her adopted capital locations, in New York and otherwise, she produced new sounds for and with others, rain and shine.

Alexandra T. Vazquez is Associate Professor in the Department of Performance Studies at New York University. She is the author of Listening in Detail: Performances of Cuban Music (Duke University Press 2013, winner of the American Studies Association's Lora Romero Book Prize). Vazquez's work has been featured in the journals American Quarterly, small axe, Social Text, women and performance, the Journal of Popular Music Studies and in the edited volumes Nonstop Metropolis: A New York City Atlas, Reggaeton and Pop When the World Falls Apart. She is a graduate of the New World School of the Arts in Miami, Florida. Vazquez is currently working on two book projects: The Florida Room and Music and Migrancy: Miami Experiments with Performance (1965-1995).