Accessibility links
Review: 'Downton Abbey,' Revisited The new film is "less a victory lap than a cakewalk." Everything about the TV series — those aspects you loved, and those you didn't — is reproduced here with astonishing fidelity.

In The 'Downton Abbey' Film, A Royal Visit Proves Rather A Spot Of Bother

In The 'Downton Abbey' Film, A Royal Visit Proves Rather A Spot Of Bother 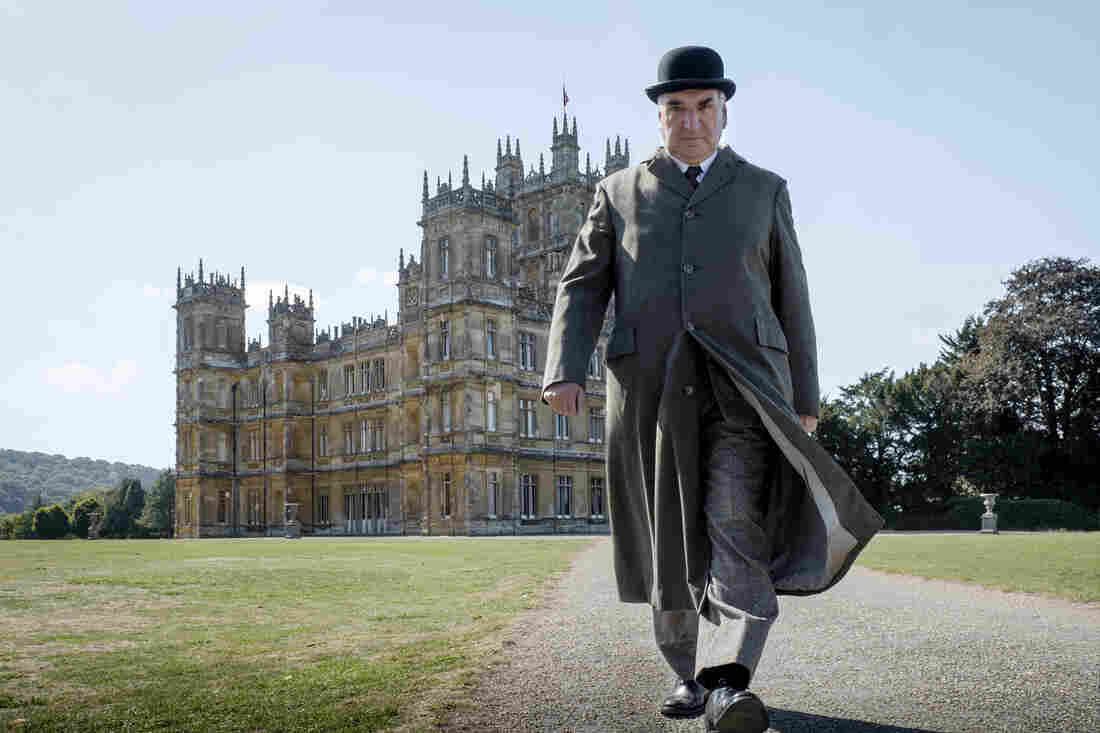 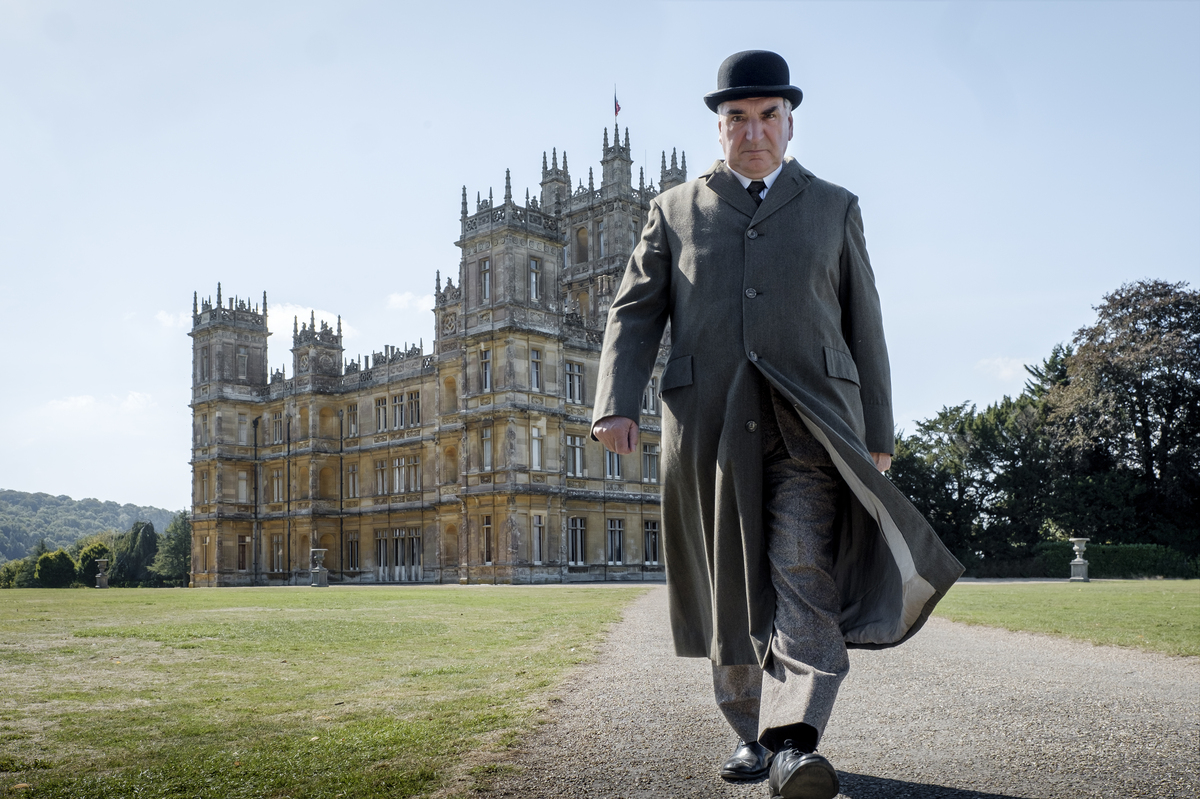 Jim Carter returns as Charles Carson for a royal visit in Downton Abbey.

There is nostalgia, and there is Downton Abbey.

Nostalgia bathes the past in a golden light that falls patchily, shining clear and steady on what was tidy and genteel, while leaving an era's ugliest, most brutal recesses sunk in shadow.

The light thrown by Downton Abbey over the course of its six televised seasons proved even more fitful; creator Julian Fellowes illumined a past where rigid class distinctions existed to make everyone, high-born and low-, know their place and keep to it happily. The noble Crawley family worked so hard looking after their vast Yorkshire country estate that they found themselves, on more than one perfectly ghastly occasion, made slightly late for tea. Occasionally a servant might fall out of line, exhibiting anything from a minor breach in etiquette to a (perfectly justified) exhibition of class resentment; this was always swatted down with gentle aristocratic firmness, and the high-status status quo was summarily restored without a fuss.

Or rather, with the barest modicum of fuss. Because every episode ran on a two-stroke engine that might best be typified as:

1. There's Rather A Spot Of Bother With The Pudding Spoons!

2. Oh No Here They Are, Whew That's Sorted, Bob's Your Uncle.

Again and again, some hairline crack would appear in Downton's social order (Spot of Bother!) only to get spackled over immediately by the landed gentry's quintessentially British ability to pretend to decorously ignore it (Bob's Your Uncle!).

This lent the show a gentle, insistent, lulling rhythm, which might help explain why a series about rich, stuffy but intermittently lovable snots and the people who serve them became the international phenomenon it did.

As 'Downton' Draws To A Close, A Look Back On What Made The Show Great

Change came gradually, incrementally, to Downton over the series' run, but come it did. Early-season villains grew chastened, stiff upper lips went a bit soft at the corners, but in its last few seasons the experience of watching Downton Abbey went from one that was comforting and familiar to one that proved frustrating and repetitive. We came to learn every contour of these characters' lives, to say nothing of these actors' means of portraying them:

And as for the servants: Ms. Hughes (Phyllis Logan) was stern but feisty, Carson (Jim Carter) bluff and officious, Anna (Joanne Froggatt) loved nothing more than piously tut-tutting her fellows, Mr. Barrow (Robert James-Collier) was evil until he suddenly wasn't, and Mr. Bates (Brendan Coyle) was yeah actually you know what never mind no one cares about Mr. Bates.

They're all back, in a film that's less a victory lap than a cakewalk. Which is to say: In every meaningful way, the film feels like another episode of the series, reproducing, with remarkable fidelity, its various strengths and its sundry weaknesses.

Granted, on the surface at least, everything about the movie is grander, more sweeping than the series: In the opening credits, the cast members' names glint and gleam like freshly polished silver. The opening theme teems with more strings and woodwinds than ever; and our first sight of Downton takes place in a not-made-for-TV drone shot that soars over those fusty Jacobethan towers just as the violins swell to their melodramatic fullest.

The stakes are higher, and they feel like a long-expected culmination — a royal visit, a situation that lets Fellowes' monarchist leanings stop their leaning and finally tumble forward onto the parquet floor to do giddy somersaults. Downton the series was always at its best when laying out the juicily complicated logistics behind the day-to-day running of an English country house; Downton the movie spends a good deal of its running time on the furious preparations that precede the arrival of King George V (Simon Jones) and Queen Mary (Geraldine James), and on the specifics of the Downton staff's interactions with the royal retainers. Every last one of the scenes is precisely, uncannily, exactly what we expect — no more, and no less.

And just as Downton the series was at its feeblest whenever it attempted to tackle story beats meant to evoke heart-racing suspense, Downton the film includes a plot thread that culminates in what passes for an action scene so flatly staged it seems only fitting that the characters immediately proceed to forget about it before we do.

Everything about the film has been finely tailored to deliver precisely what the series did, albeit in a form both more condensed and more diffuse. Condensed in the sense that we spend another two hours revisiting characters we've come to know over the course of more than 50; diffuse in the sense that there's ... a hell of a lot of characters to revisit, so we spend comparatively little time with each.

But in those brief encounters, they present themselves just as we remember them: Carson blusters, Anna primly upbraids a servant, Bates is boring, etc. A handful get allotted enough screentime to deepen a bit: Barrow gets to do some furtive gay fumbling, and the Dowager Countess shows a softer side.

Mostly though, nothing changes. One character questions whether something, anything should, only to get a wincingly earnest reprimand that no, everything must remain precisely as it always has, for the aristocracy is the very soul of Britain, etc. etc.

You will be forgiven if you find yourself absent-mindedly gazing off to the left of the movie screen at this moment, as if you might catch a glimpse of writer Fellowes, eagerly mouthing along. It certainly feels like an act of cinematic ventriloquism, that scene.

What you do get, in the absence of any measurable change or growth, is endings. In the film's final minutes, every. Single. Character. Gets a last line of dialogue that is clearly intended to be their final line of dialogue. It feels at once like a summing up, and a winding down.

Which, despite how perfectly pleasant, how deeply comfortable it proves to spend some more time with these characters in this place and this time, only seems appropriate. Because this film confirms that while Downton Abbey (and Downton Abbey) may not have changed, we have.

The world of Downton can't help but land on you differently, here in the back half of the decade, than it did during the show's 2010-2015 run. The series arrived on the heels of the global economic collapse, when its romanticized view of excessive wealth — and the even temperament and judicious kindness of those who possess it — felt like a quaint bit of harmless fantasy. Today, depictions of the obscenely rich (Succession, Billions, Generation Wealth) are much more willing — eager, even — to engage with the obscenity of it all in a clear-eyed way that seems more honest, more relevant and more urgent.

But then, urgency is not, and has never been, Downton Abbey's organizing principle. To watch the series, and now the movie, is to revel in the unruffled, decorous quiet of urgency's complete absence — a quiet that gets disturbed only slightly, and briefly, should some regrettable bit of business arise, vis-a-vis those blasted pudding spoons.