Accessibility links
The Russian Student Who Has Become Moscow's New Face Of Dissent In his last YouTube video, 21-year-old student Yegor Zhukov said, "Russia will eventually be free. But we may not live to see it if we let fear win." He was arrested in Moscow on Aug. 1.

The Russian Student Who Has Become Moscow's New Face Of Dissent

The Russian Student Who Has Become Moscow's New Face Of Dissent 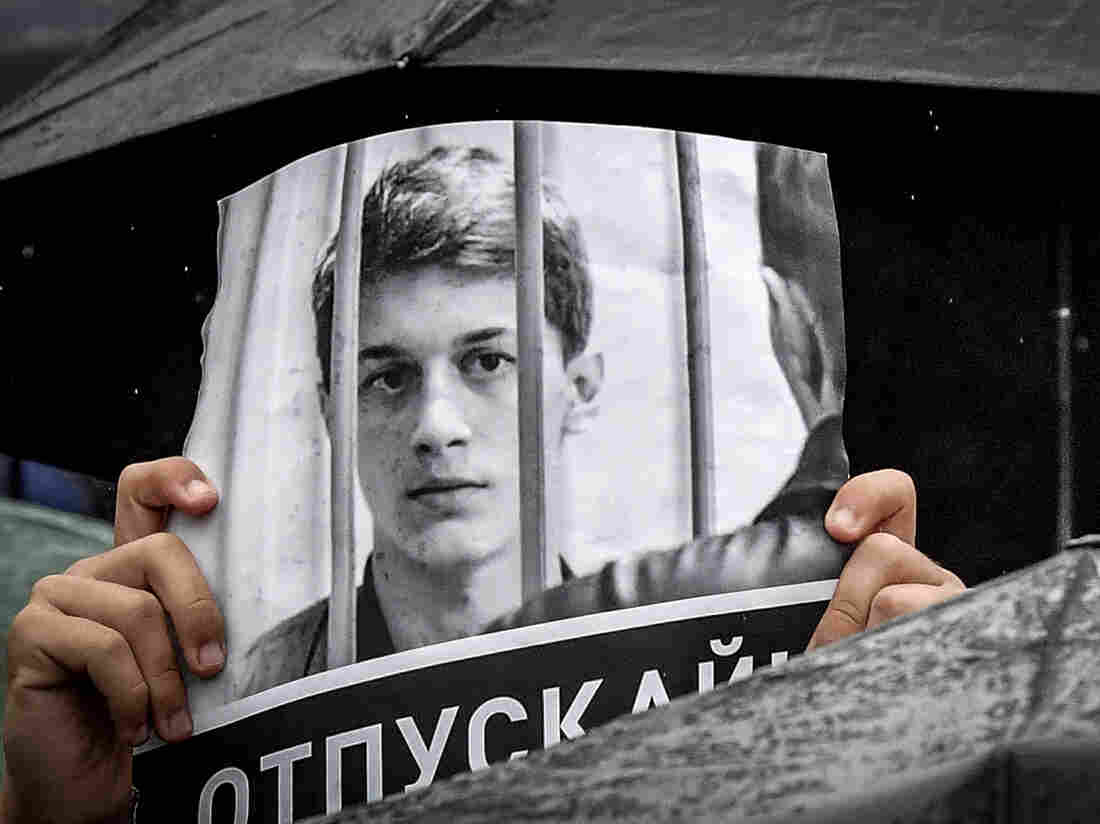 A protester holds a poster reading "Free Yegor Zhukov!" during an August rally in Moscow, after mass police detentions. He was arrested in Moscow on Aug. 1. Yuri Kadobnov/AFP/Getty Images hide caption 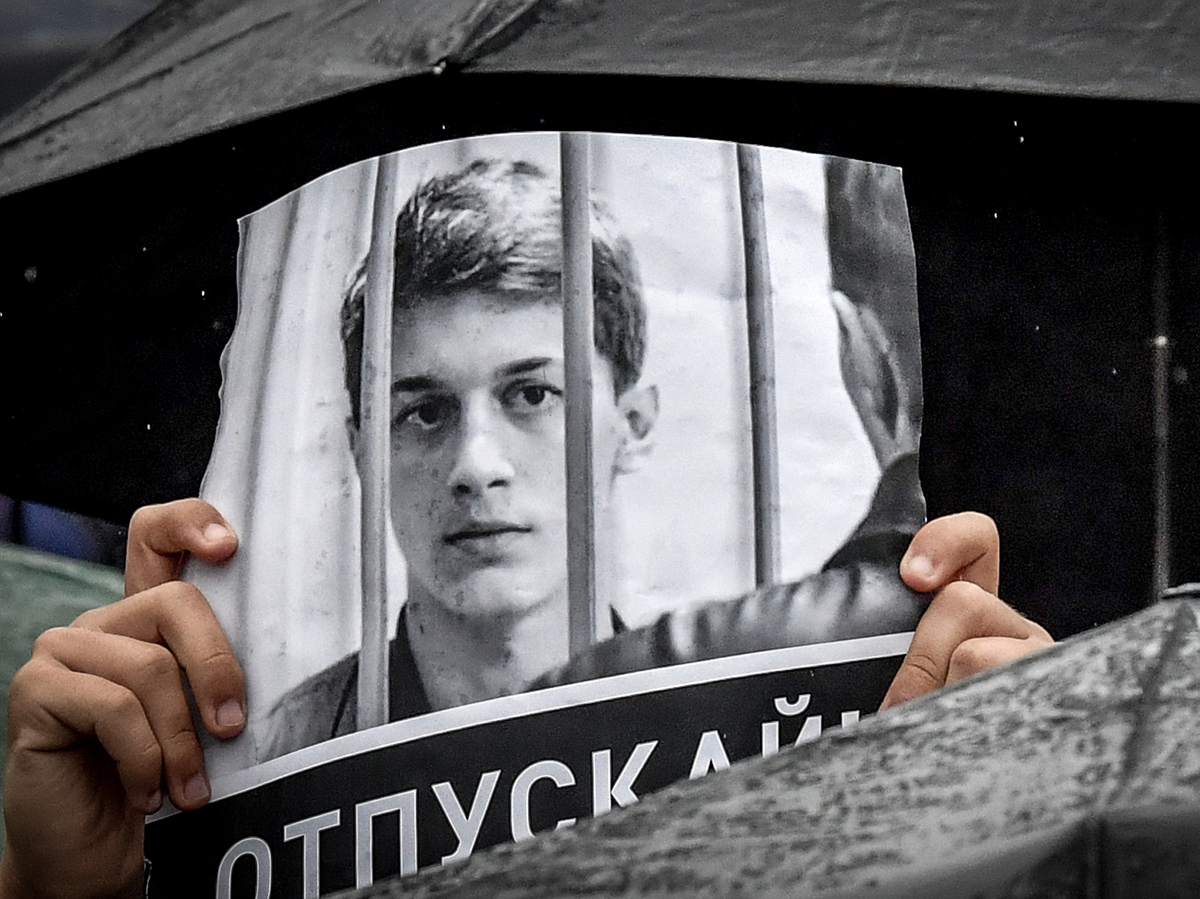 A protester holds a poster reading "Free Yegor Zhukov!" during an August rally in Moscow, after mass police detentions. He was arrested in Moscow on Aug. 1.

On Aug. 1, Yegor Zhukov posted his last YouTube video, making an impassioned appeal to support anti-government protesters caught up in the wheels of Russia's criminal justice system. Wearing a dark blue button-down shirt, the 21-year-old Moscow political science student leaned into the camera and urged Russians not to be cowed into silence.

"Russia will eventually be free," he said. "But we may not live to see it if we let fear win."

Hours later, law enforcement agents arrested Zhukov and charged him with rioting during an unauthorized rally in downtown Moscow.

Overnight, Zhukov became the human face of a crackdown on political dissent that Amnesty International calls an "unprecedented" attack on Russians' freedom of assembly and expression. At demonstrations ahead of Sept. 8 local elections, police beat dozens of protesters and detained hundreds.

Zhukov's arrest mobilized his fellow students and fueled a petition drive by Russian academics against political reprisals. Oxxxymiron, one of Russia's most successful rappers, even offered to put up a 2 million ruble ($31,000) bond for Zhukov, but a Moscow court turned him down.

Protests broke out this summer after election authorities barred more than a dozen opposition candidates from running for Moscow's City Council, claiming they had not collected enough valid signatures. The opposition seized the opportunity to turn a local election into a battle with President Vladimir Putin, who has held on to power for 20 years.

The Kremlin stood its ground, viewing the legitimization of its opponents as a dangerous precedent — and a slippery slope to sharing power in other regions. The ruling party ended up narrowly retaining control of Moscow's City Council, ceding seats to other parties under the Kremlin's control.

Zhukov briefly made a run as an opposition candidate for the council. 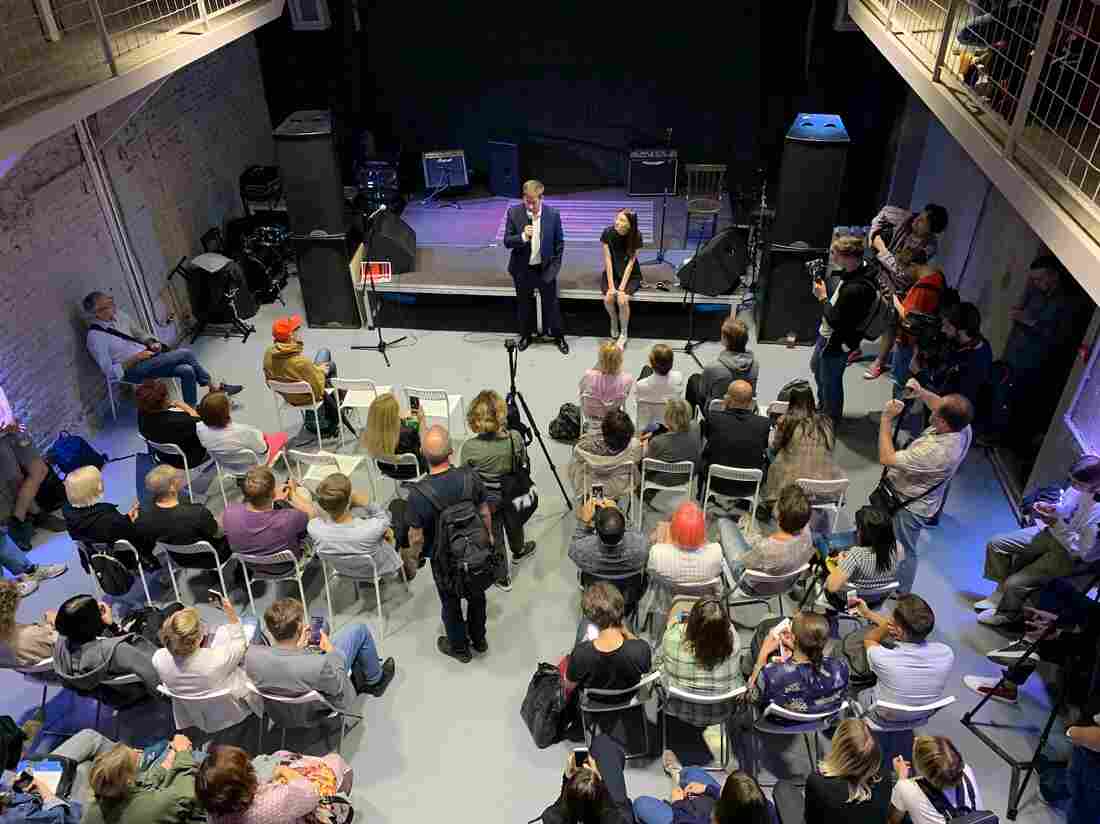 Ilya Novikov, Zhukov's lawyer, speaks at an auction to support political prisoners. Novikov says that even though the charges against Zhukov have changed and he's now under house arrest, the student still faces up to five years in prison. Lucian Kim/NPR hide caption 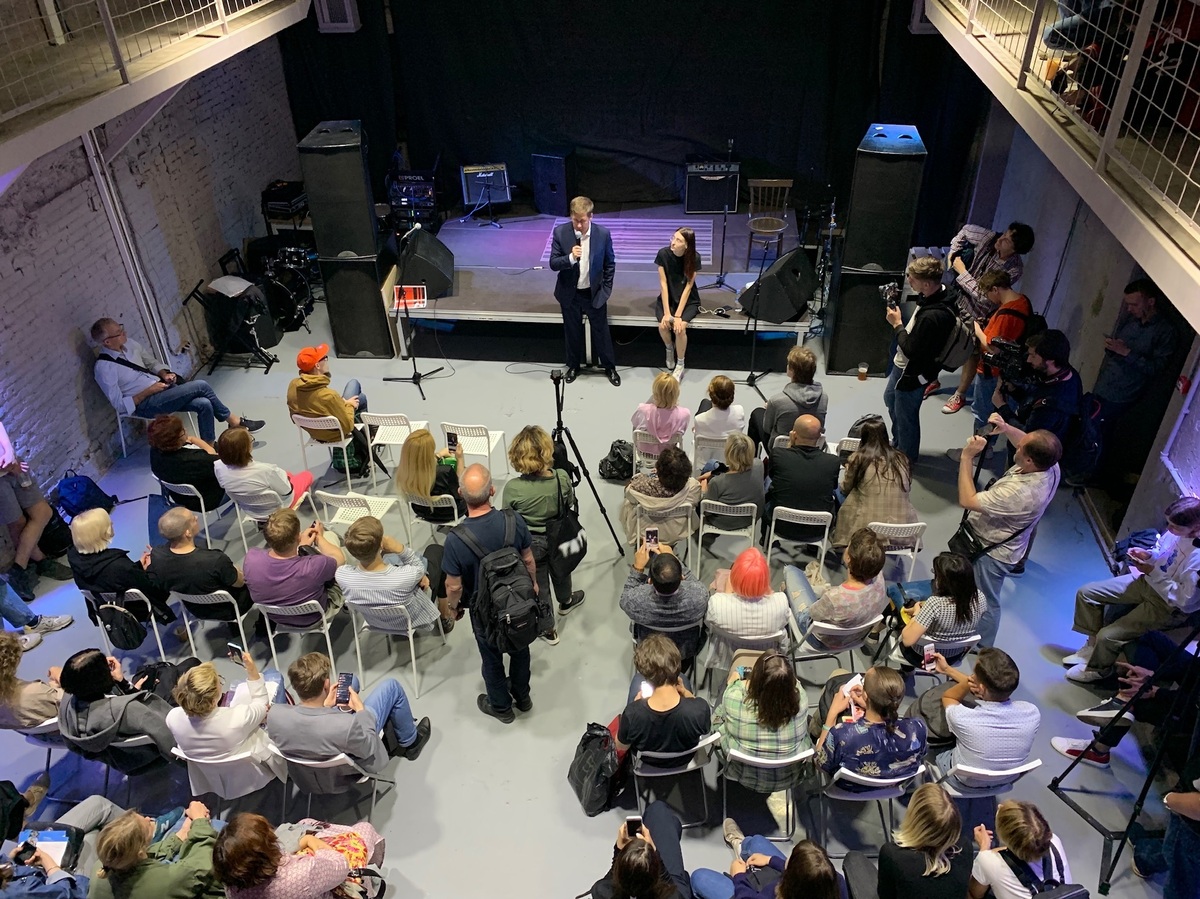 Ilya Novikov, Zhukov's lawyer, speaks at an auction to support political prisoners. Novikov says that even though the charges against Zhukov have changed and he's now under house arrest, the student still faces up to five years in prison.

"I'm not the most experienced or famous candidate. I have nothing to offer you but energy, commitment and my convictions," he wrote in his campaign pitch. "But I can guarantee three things: I will never deceive you, I will never look down on you, and I will never stop fighting for you."

Zhukov later dropped out of the race, saying he wasn't able to collect enough signatures to launch his candidacy. But he continued analyzing politics on his video blog and attended an opposition rally on July 27 that had been banned by Moscow's mayor, a Putin loyalist.

The police detained more than 1,000 protesters at that demonstration and later charged a dozen of them, including Zhukov, with rioting. Memorial, one of Russia's oldest human rights groups, denounced the criminal cases, saying the protests on that day were overwhelmingly peaceful and that the police, instead of guaranteeing citizens' right to assembly, used force to disperse them.

Zhukov's classmates at Moscow's prestigious Higher School of Economics have rallied to support him, collecting money for his legal defense.

Artyom Tyurin, a 19-year-old political science student, was arrested while demonstrating for Zhukov's release and was jailed for a week.

"Seeing what's happening right now in my country, I understand how much things need to change," Tyurin said. "I want to live in Russia. I think Russia deserves to be free, and its citizens need to get out from under the yoke of Putin and his gang."

Tyurin calls Alexei Navalny, Russia's best-known opposition leader, a hero. The 43-year-old anti-corruption campaigner was a driving force behind the last wave of street protests that started in late 2011. Despite serious handicaps, including limited media coverage, Navalny won 27% of the vote in Moscow mayoral elections in 2013 and ran the only real presidential campaign challenging Putin last year by building a nationwide network of regional offices.

Navalny's investigations into official corruption have sparked anti-government street protests in the past. In this summer's campaign for Moscow City Council, his allies were banned from running and many served repeated jail sentences.

On a recent evening, Khatima Mutayeva, an 18-year-old journalism student, was at a charity auction to raise funds for political prisoners. Mutayeva wore a T-shirt saying "Free Zhukov!" and sold stickers, buttons and T-shirts demanding his release. She laughed at the cliché that young people are only interested in their phones and rap music. 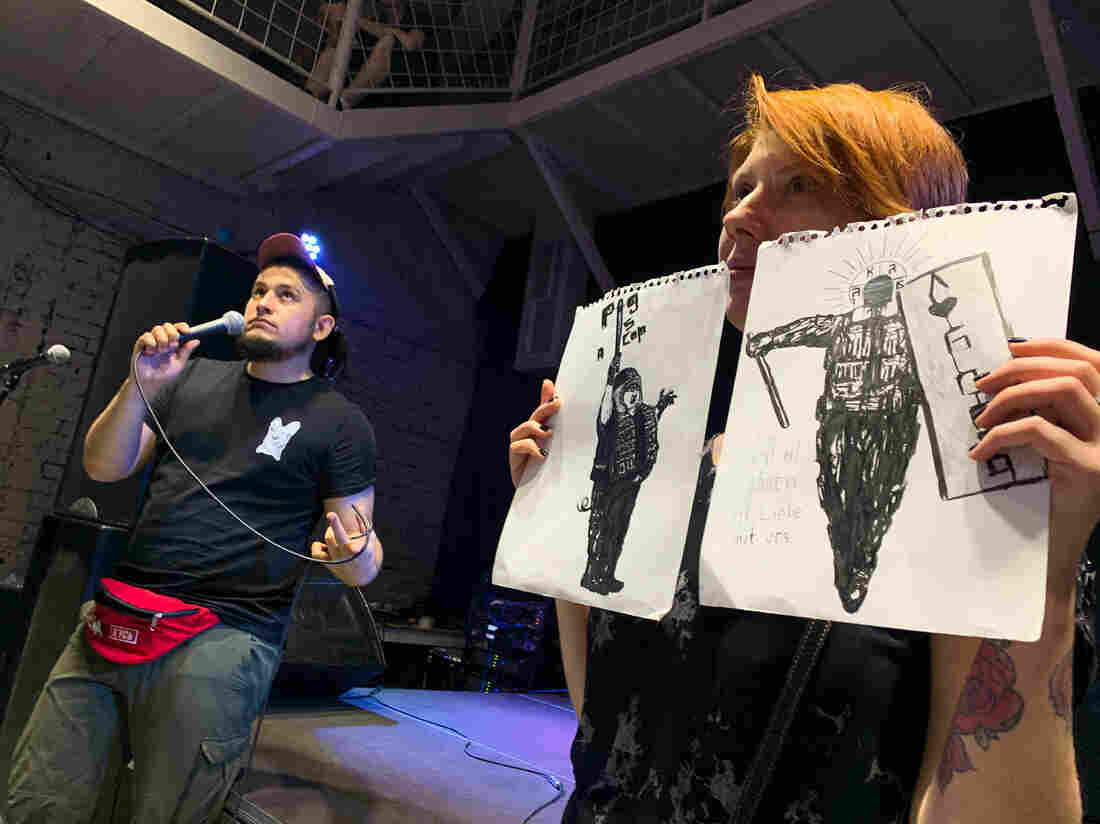 At an auction to support political prisoners in Moscow, two drawings of riot policemen go on the block. They were drawn by Oleg Navalny, the younger brother of opposition leader Alexei Navalny, who spent more than three years in prison after a conviction he calls politically motivated. Lucian Kim/NPR hide caption 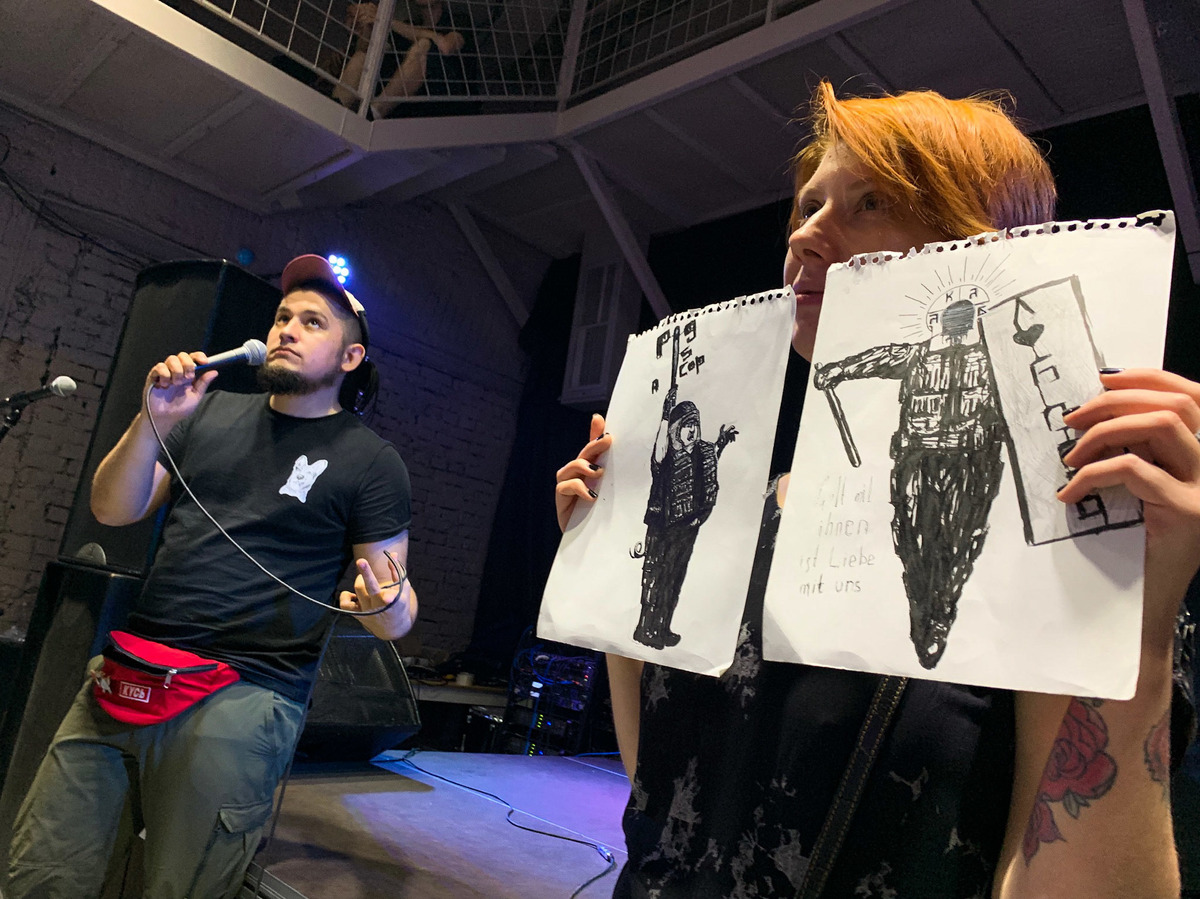 At an auction to support political prisoners in Moscow, two drawings of riot policemen go on the block. They were drawn by Oleg Navalny, the younger brother of opposition leader Alexei Navalny, who spent more than three years in prison after a conviction he calls politically motivated.

"If it weren't for our phones and our rappers, we wouldn't have gotten where we are now. Even Oxxxymiron supported Yegor Zhukov," Mutayeva said. "When smartphones, the Internet and rap appeared, it immediately became clear that politics would take over this space."

Mutayeva said she is well aware of the risks associated with her activism. "I won't lie. Of course it's scary." But she says she doesn't have a choice. "I can't just sit at home. My conscience wouldn't let me."

Student activists celebrated a small victory in early September, when a judge moved Zhukov from jail to house arrest. But as prosecutors' case against him for rioting crumbled, he is now being charged with "extremism," which carries up to five years in prison.

Novikov says Zhukov is cheerful enough, considering his circumstances. His name has been added to a government blacklist of extremists and terrorists. The terms of his house arrest mean he can't use the Internet or receive visitors; he required special permission to have a barber come and cut his hair.

Zhukov lives with his parents, brother and grandmother; his father has worked in the Russian space program. Zhukov's family is not commenting on the case.

Other protesters detained during opposition rallies have already been sentenced in rushed court proceedings. A blogger, Vladislav Sinitsa, was handed a five-year jail sentence for a tweet that prosecutors said threatened the children of law enforcement officers. A computer programmer, Konstantin Kotov, was given four years for repeatedly taking part in unauthorized rallies.

Shortly before Zhukov was placed under house arrest, he wrote an open letter from his jail cell. In it, Zhukov predicted that a change in Russia's leadership would come as unexpectedly as his own arrest.

"What we once thought impossible will suddenly happen," Zhukov wrote. "And in hindsight, it will appear to have been inevitable."