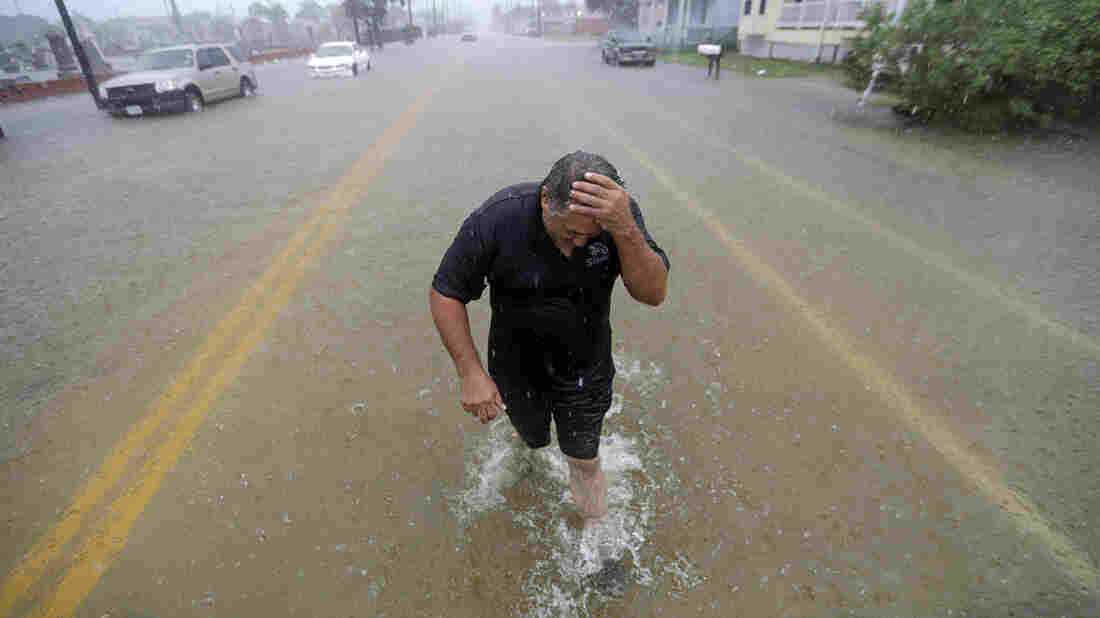 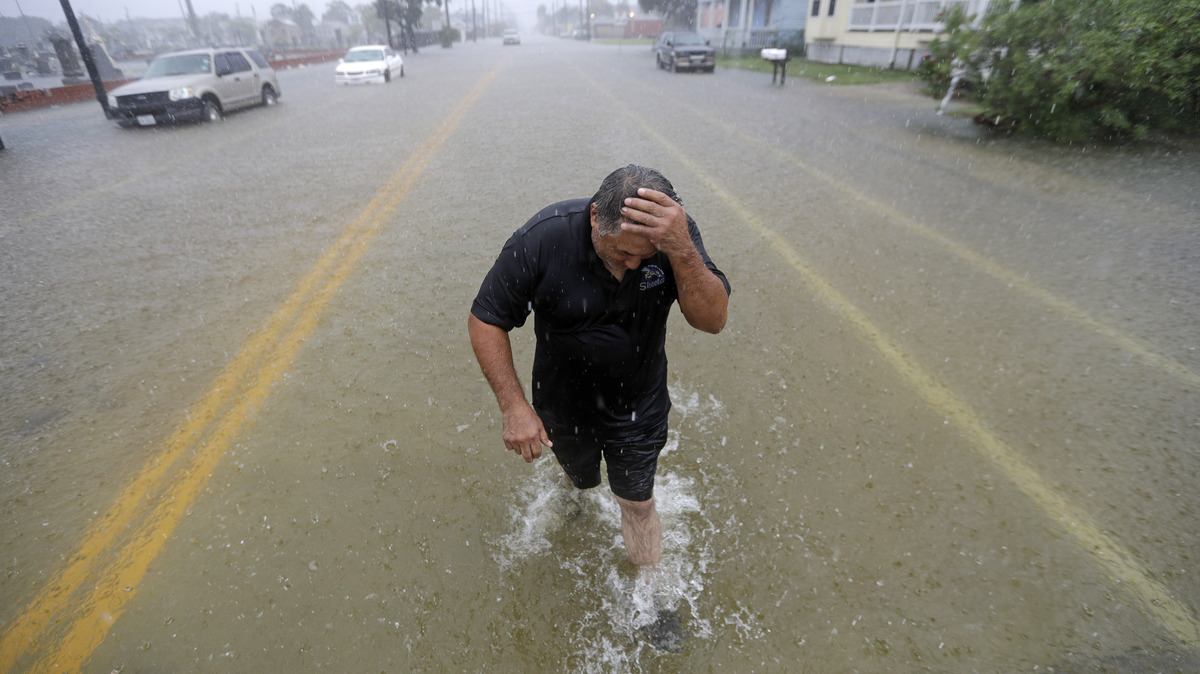 Swaths of southeast Texas were underwater Thursday after Tropical Depression Imelda caused catastrophic flooding. Scores of residents had to be carried through the floodwaters and motorists needed to be rescued from submerged vehicles. Children were forced to shelter in place at schools in Houston.

"Major, catastrophic flooding is occurring across much of southeast Texas," the National Weather Service says. With more intense rain in the forecast, the agency says, some areas could see rain totals of 30 to 40 inches through Friday.

Houston's school district has come under fire for its decision to hold classes as normal on Thursday, particularly after video emerged showing at least one school, Durham Elementary, was experiencing flooding. In that video, children are seen walking on benches, trying to navigate their way past inches of water covering the ground in a covered walkway.

In the early afternoon, the district announced that its students and staff were sheltering in place, following emergency protocols.

At 3 p.m. local time, the school district said via Twitter, "Transportation Services will operate as normal. As buses arrive early, students will be placed on the bus for early commutes to avoid traffic delays." But it added, "However, due to road conditions, some buses might be delayed when dropping students at their drop-off location."

The storm forced Houston's George Bush Intercontinental Airport to order a full ground stop around 9:30 a.m. local time Thursday. In an update, the airport says some roads leading to the airport are flooded and that flights were delayed.

"The airport is open, we have power and restaurants are open, so your passenger will be OK," the facility said via Twitter.

There are no words to describe the rain we’re seeing in Winnie, Texas. It’s relentless. It’s unforgiving. We’re on the ground bringing you LIVE coverage on -> https://t.co/TYCmBA6uYP. #BREAKING #abc13 #hounews pic.twitter.com/dCF7RBtMsK

In a combination proving to be disastrous, Imelda is creeping along as it drops massive amounts of rain onto eastern Texas and western Louisiana. The warnings of new threats come a day after floodwaters from Imelda already covered streets in Galveston and other coastal areas.

Torrential rains ravaged the town of Winnie, between Houston and Beaumont, filling roadways with water Thursday morning. The communities of Aldine, Kingwood and Conroe also were hit by floods.

These are current conditions in Aldine and Kingwood areas. Please be safe, several motorists are stranded. #HouNews #HouWx pic.twitter.com/X3d7Y5iJNZ

The Cajun Navy says its volunteers are currently using "surface drive" boats to carry out water rescues in Vidor, Beaumont and other areas. The Louisiana-based nonprofit rescue group's president, Shawn Boudreaux, tells NPR that he is currently working with emergency workers in New Caney, north of Houston.

Boudreaux says Cajun Navy member Flint Theriot started rescuing people early Thursday — first by helping a constable in Vidor operate a high-water vehicle and then by working on his own in a boat.

"There was a woman who was in a wheelchair and she had been calling asking for help," Boudreaux says. "And by the time we got there, the water had risen up to her shoulders."

Police in Houston are also carrying out high-water rescues, helping families whose street was turned into a coursing river, as a video from Police Chief Art Acevedo shows.

Discussing the strong currents floodwaters can generate, Boudreaux says, "It's on a mission to find a path to the ocean, and it's going to cut through whatever path it can find — cut through a sewer here, come out of the gutter over there — I mean, whatever is coming out in these situations is not something you really want to play around in."

The Coast Guard says it has staged emergency response teams in Jefferson County, Harris County and Houston to help people threatened by the flooding. It adds that shallow-water-rescue teams from a Marine Safety Unit in Baton Rouge, La., and helicopters from Air Station Houston are also ready to help.

"People in distress should use 911 to request assistance," the Coast Guard says, adding that in the intense time frame of an emergency, social media messages can't be monitored on all platforms and accounts.

The worst rain is forecast for coastal and southeast Texas, where an additional 5 to 10 inches of rain are expected to fall through Friday, the NWS says. Parts of southwest Louisiana should expect an additional 3 to 5 inches, with isolated totals of 10 inches.

As of 11 a.m. local time, the storm was roughly 55 miles north of Houston, but it had slowed down to 3 mph. Northeast of the city, large parts of Harris and Jefferson counties were alerted to a flash flood emergency Thursday, as officials urged residents of Port Arthur, Beaumont and nearby areas to seek higher ground and avoid driving or walking through floodwaters.

In addition to rain, the storm is bringing maximum sustained winds of near 25 mph, with higher gusts.

"Extremely persistent thunderstorms on the southern flank of the system are producing prolific rainfall and dangerous flash flooding across portions of southeast Texas Thursday morning," the National Weather Service says in its short-range forecast.

Rainwater inundated streets, cars and yards in part of Beaumont on Thursday as shown in a stunning video shot by a Live Storms Media drone. The early morning footage shows water nearly covering the wheel wells of cars that were parked just outside houses, in an apparent attempt to keep them safe on high ground.

As seen in the drone video's survey of the stricken neighborhood, rain continues to fall and lightning flashes from Imelda's thunderstorms.

"Things really started to deteriorate between two and three o'clock in the morning," he said. "And it's amazing what took place because it was moving through the area literally at 5:45 late yesterday afternoon at about 7 miles per hour, and all of a sudden we get some high pressure — things kind of turn around and come back from the northwest."

Extreme rain events are becoming more likely as the climate changes, in part because warmer air can hold more moisture. In 2017, for example, Hurricane Harvey dumped significantly more rain around Houston than it would have if global warming wasn't happening. But as the National Climate Assessment makes clear, a storm need not be a hurricane to dump a catastrophic amount of water.